Sometimes I let Stephan play with the cows - actually he offered to go and bring them in from where they were just grazing along the lane, after I'd opened a gate for them earlier to move from one paddock to another. 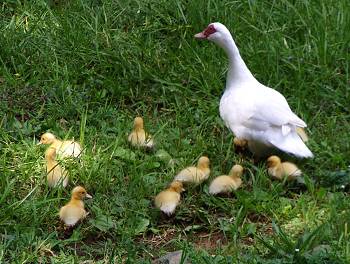 The Muscovy duck still has nine ducklings, so I've started feeding them.  They just don't manage to find enough to eat as they range around the paddocks and if they don't maintain enough energy, they begin dropping behind their mother and fail to survive! 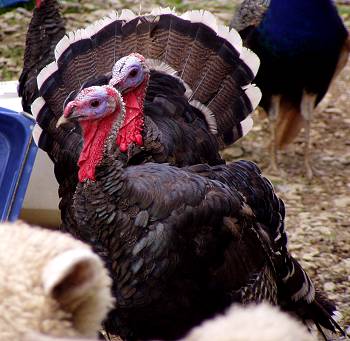 These are two of the three turkey chicks we obtained from Tony in Maungatoroto.  These two are male and there's a hen bird as well. 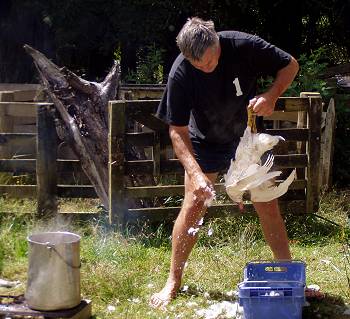 Of the twelve Muscovy ducklings I rescued back in November, only three have survived predation by Harrier Hawks, which continued to attack them even as they approached adult size!  There are only three drakes left, so today we caught and dispatched them, one for dinner tonight and the other two to go into the freezer for later.

Stephan prefers to dunk the birds into near-boiling water to complete the plucking, so heated up a bucketful before he began, on an old camping gas-ring.

We dined on roast duck with stuffing made from all manner of herbs from Stephan's garden! 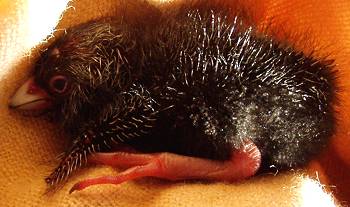 The cattle in the Camp paddock were making a dreadful racket this evening, so I dashed out to see what was going on.  They were all most upset about a Pukeko nest in some rushes, which contained a just-hatched chick.  I resisted the temptation to rescue the chick and left the paddock, but within half an hour, the cattle were making even more noise, so I went back again.  There were two other very mobile chicks, which had retreated into the surrounding rushes, and the parents were warily watching from a little distance.  It didn't look like the cattle were going to leave the nest alone and the chick was in danger of getting cold as darkness approached, if the parents were not able to return to the nest.  So I brought it home. 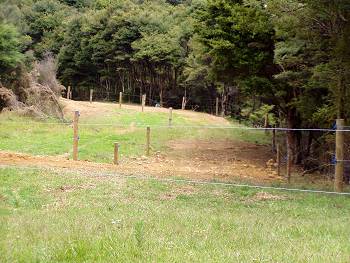 Work has been progressing out the back, on the new lane fence.  We make the lanes about five metres wide, so the cattle can move easily along them and trucks and tractors may also pass with ease.

The river runs around under the trees on the outside of the bend in the picture and a new fence will be constructed on the other bank to enlarge the Back Barn paddock. 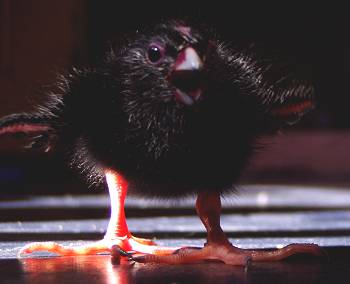 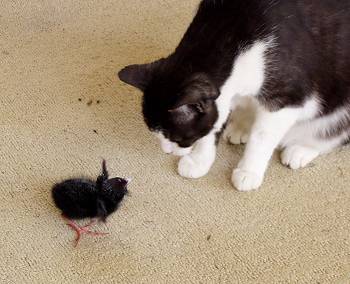 The Pukeko chick is doing well, although I have found it far more difficult to feed than I remember from last time I raised chicks - and from the instructions I've dished out to all the Pukeko-finders who've emailed me in the last few years!  Today it is taking food from my fingers, rather than having to have it eye-droppered into its waving bill.

The first two or three days are always the most critical and if the bird is thriving by that stage, things look good.  By then I know that I have night-time temperatures right, the diet has what the creature needs and so on. 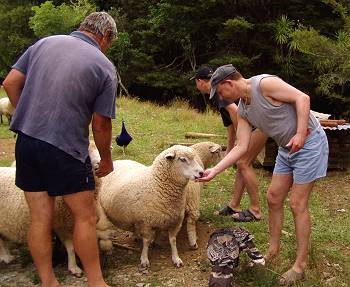 Stephan's cousin, Christina, visited this afternoon with a couple of German friends, who were delighted by all the animals.  They had close encounters with cows, then visited the area in which the sheep currently live with all the poultry.  They appeared quite delighted with it all - although I suspect Spice and the Pukeko were more of a hit than all the others! 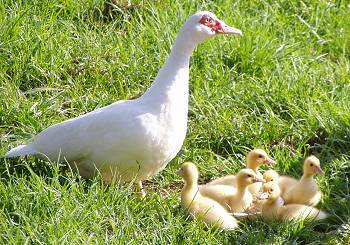 Some of the ducklings have gone!  I am surprised that having survived this long, they're suddenly being eaten by something - maybe the something was waiting until they were a decent mouthful.

I inseminated 470 a month ago and to my surprise, having safely passed her 21-day return date, she started running around calling for a bull today!  I decided she could just jolly well go and visit Arran, who was quite happy with the arrangement.  He's significantly bigger than she, but he has mated a number of the other yearlings quite safely and his calves are easily born. 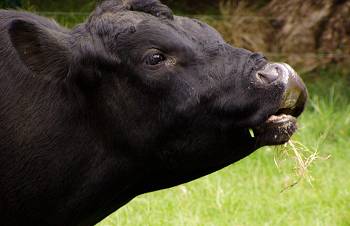 The bull's expression is called the Flehmen Reaction and is demonstrated by many animals in the detection of readiness for mating.  It is most often seen in males after sampling urine from a female, opening access to the vomeronasal organ, which detects certain pheromones and thus the oestrus state of the animal being sampled.  If your cat sniffs something particularly interesting, you'll notice it too will do something a little like this.

Later on things were exactly as I like to see them: the heifer with her tail out a little, but looking reasonably comfortable, grazing quietly near the bull, who is no longer actively trying to mount her.  It means he's done his job and knows he's done it enough. 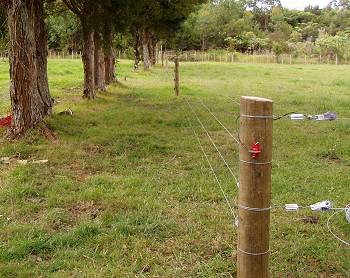 Out at the back of the farm Stephan has removed the old fence along the bottom of the Back Barn paddock and replaced it with a four-wire electric fence.  The old gate has been left in the corner by the boundary, but now has a nice new post and a latch, instead of a load of old wire tied to a rotting Puriri post, to hold it shut.  The line of trees stands where the old fence was: evidence of how Totara tree seedlings often grow along fence-lines, gradually growing up through the wires and often wrecking them!  On the other hand, there are a number of fences around the farm still which, had they not had Totara grow through them, would have fallen over or become extremely slack.  The trees as they grow more stout, keep tension on the wires through which they're growing, as well as acting a little like fenceposts. 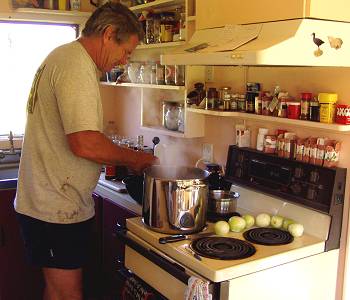 Stephan bought a box of tomatoes this week, specifically for bottling and making into chutney and sauce.  He has spent hours slaving over the hot stove, trying different recipes and bottling the results. 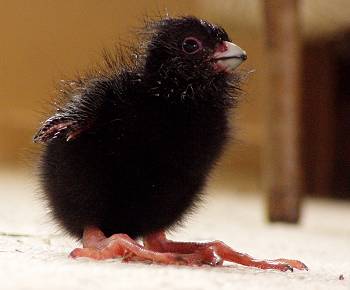 The Pukeko is doing well, just getting bigger and bigger.  At 9am this morning it weighed 42g.  When I weighed it for the first time, on Saturday morning, it was only 30g. 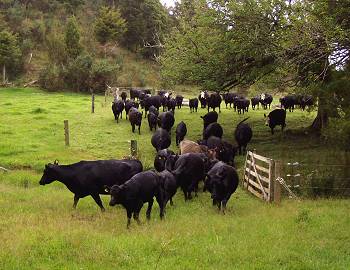 Most of the cows, calves and heifers are together as one mob now.  There are a few of the stud cattle still in a small mob with Ivy, just in case she returns for another insemination (I'd rather have her late in calf than not in calf at all), and a few of the cows with bull calves are now grazing with #26.  There might be the odd late calf as a result of that arrangement, but I'll live with it - and I'll probably curse the idea come spring, when I'm still waiting for calves weeks after the first ones arrive.  Because I'd bought such fabulous semen this year, I wanted to use as much of it as possible, but in hindsight, I'd have been better putting the later-calved cows out with the bull from the start, to catch their earliest heats.  I wonder if I missed some, in the heat of this summer, when many of them possibly failed to demonstrate that they were ready for mating.

I read some research during the summer which reported that cows in oestrus stand for mounting far more frequently in cool seasons than in the summer, so I have assumed that part of my not seeing heats this year has been due to the extreme air temperatures during part of the mating period.  But I have also wondered whether we have a worse copper-deficiency (or other trace element) problem than I think and perhaps that is contributing to the late return to fertility of some of the cows.  We will test the livers of the cull cows again this year, to see what their trace-element status is.

I had accepted that I may have a greater calving spread this year, since I wanted to bring my calving period forward from mid-October/November.  I began mating about ten days earlier than last year and for most of the cows that appears to have worked alright and most will calve a little earlier than last year.  Some of those which didn't come on heat until late into the mating period will actually calve later than they did last year.  That will tend to even out over time, since the later-calving cows often come back into oestrus quite quickly after calving because the available feed is much better by the time they calve (and when their feed needs are greatest); thus they are in better body condition than cows which calve early in the season, before the grass really gets going.  Better body condition means a cow is more likely to return to fertility quickly after calving. 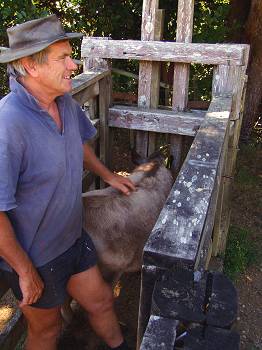 This afternoon I requested a visit from a vet.  The little grey heifer, which is now four months old, has had an increasing swelling in one quarter of her udder.  I have been watching it for the last three or four weeks, hoping it would resolve itself, but over the last week it has increased in size quite noticeably, so it is time to take some action.

The vet diagnosed mastitis and said he'd never seen it in such a young animal.  She has been prescribed a five-day course of antibiotic by injection, which means our getting her into the race as pictured, each afternoon.

Before the vet arrived, we weighed the last of the calves - all the others have been over the scales on various days over the last eight days, including the grey heifer, twice.

I am very pleased with their weight-gains this year, which show that it has been a very good season.  I have calculated the average growth per day for all the calves from the time of their first weighing (which for the stud cattle was at birth, and for the others sometime within the first two or three weeks) and now.  The results are as follows:

(The little grey heifer has grown at 1.5kg/day over the last eight days, which is quite surprising, considering that she's unwell.)