The weeks beginning the 25th of February and 4th of March 2006.
Saturday the 25th 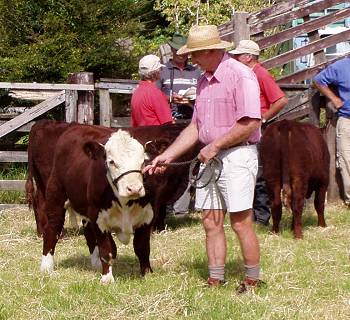 The A&P (Agricultural and Pastoral) show, was on today in Kaitaia, to which we contributed nothing but our presence.  I packed the Pukeko into a box with high sides and enough food and water for the day and took it with us to sit in the ute while we went to the show - so I could check on it periodically and provide for its needs during the morning.  We arrived early enough to watch the beef judging and were pleased to see a reasonable number of entries in the various classes.  Unfortunately the person organising the beef section had failed to advise the judge that it is acceptable at this show to exhibit unled cattle and the judge decided that he was only going to assess those with halters.  That created a bit of a stink amongst the competitors, especially those with unled cattle!  Having received a number of telephone calls during the last week or two to try and convince me to take some of my cattle to the show, I was very glad not to have done so, since they would not have been considered by the judge!

As we had no other responsibilities at the show, we then went and watched the horses for a while, knowing that our lovely niece, Amanda, would be jumping her horse at some time during the morning. 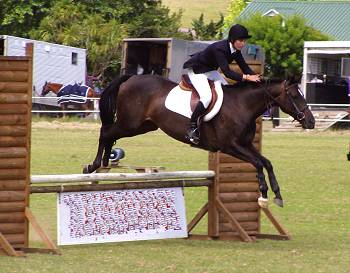 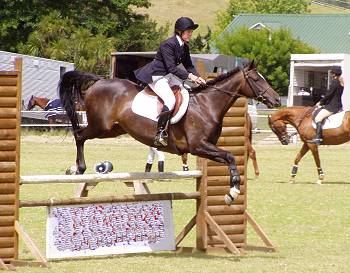 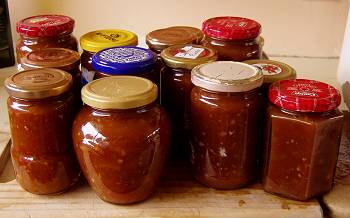 During the week Stephan bought some $1/kg tomatoes with which to make sauces, chutney and bottled tomatoes to use in cooking - rather than buying the tinned version from the supermarket, with goodness-knows-what additives.  Our secret bird-flu store cupboard (the one which used to be the Millennium cupboard a few years ago) is filling up! 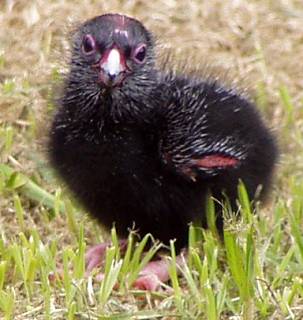 The Pukeko chick has begun eating a lot more grass.  Learning to tear bits from long leaves has been an interesting process and a lot of practice goes into holding onto bits of grass between the opposing claws on either foot, although I think the left is the favoured side. 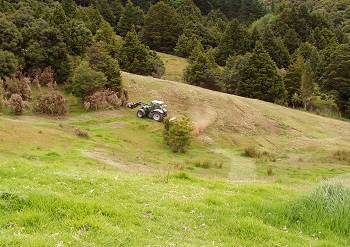 We decided we could afford to get a contractor in to do some mulching of gorse and small scrub around the farm, to help us reclaim some more of the gradually disappearing grass!  The area in the picture which has just been mowed, was covered in gorse higher than Stephan and the mulcher very noisily chops it all up into tiny pieces, so the grass may grow again.

Stephan and I just sat on the hill and watched as pieces of our farm reappeared, where we'd not seen it for some time!

Below is Onix, at right, and her daughter this year, #523.  Onix belongs to Issa (my nephew) and he'll be very pleased to know that 523 has been sold and will, once weaned, be going to live near Kawakawa.  Her sire is Virago Arran 20 AB.  I think she's a rather nice looking heifer and her growth rates are pretty pleasing too. 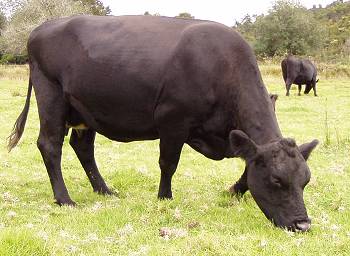 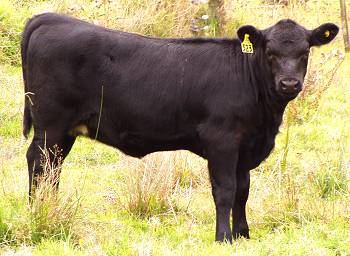 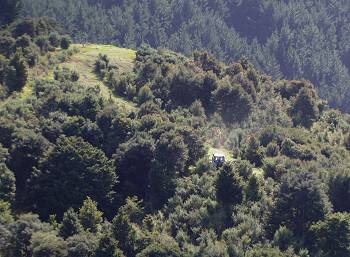 The mulcher has been crashing around the farm all day and this afternoon I watched in delight as parts of this hillside reappeared from under all the scrub cover.  There's still a lot of Manuka on the hill, suitable for cutting down for very nice firewood (you can email us about that too, if you are someone looking for standing trees for cutting and removal).  The mulcher could run down huge gorse plants, but the Manuka is just too big and hard, so will need cutting by hand.

Friday the 3rd of March 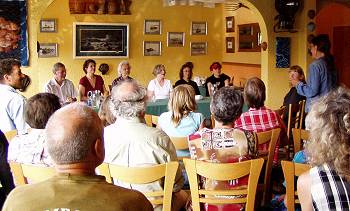 The fifteenth annual Words on Wheels tour, arranged by the NZ Book Council. Each year it travels around a different rural region and this year is our turn. Elizabeth Smither, Jo Randerson, Paula Morris, David Hill, Hinemoana Baker, Richard Wolfe. 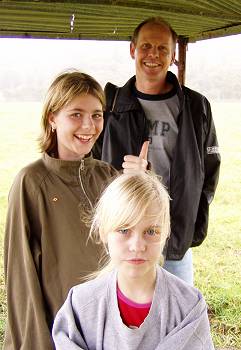 I went to school at Taipa, over on the east coast, about a three-quarters-of-an-hour drive from where I now live, but because it was then only a smallish school, some of us left to do our last two years of secondary schooling at Kaitaia College and it was there I made friends with Cliff.  Cliff and I have maintained contact sporadically and hadn't seen each other for about 15 years, at which time both our lives were rather different than they are now!  Cliff now lives in Canada with his lovely daughters, Jaidan and Callyn, and was back 'home' visiting his family, so came to see me too.  The girls had a lovely time meeting the cows and then the sheep and the large variety of poultry, which mobbed us all as soon as we set foot in their area! 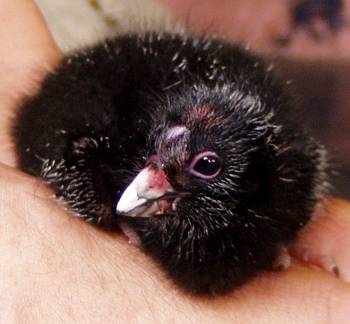 The Pukeko chick continues its loud and demanding existence; here sitting on Stephan's feet as he is having an afternoon read. 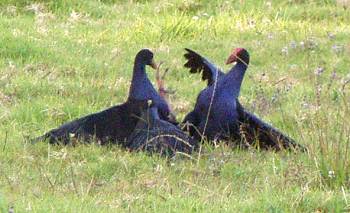 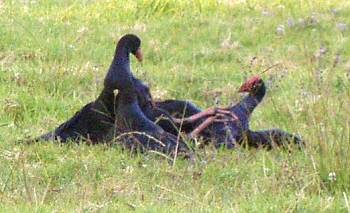 About fifty metres from the house this morning, this violent encounter occurred.  I don't ever recall seeing Pukeko fight like this - certainly I've seen them facing off and flying at each other, but never sat back on their tails with feet on each other's chests! 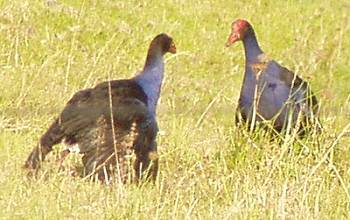 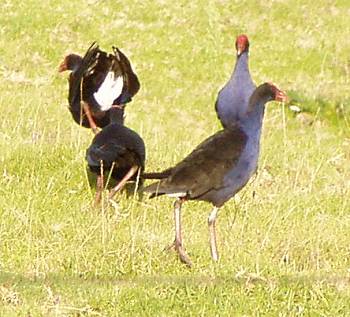 There were six or seven birds involved, although most of them only stood by and screeched!  I think a stranger had encroached upon the territory of the larger family group which usually inhabits this space.
Sunday the 5th 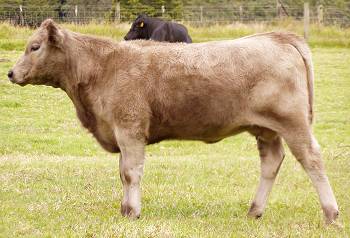 Heifer 516's udder lump has remained much the same size, despite antibiotic therapy, so the vet prescribed another drug, for another few days' treatment.  You may be able to see in the photo, that both quarters on the left side are affected and after half of the second antibiotic, I'd have to say things are not looking any better!  516 still appears quite well, so we'll finish this prescription and then see what happens next. 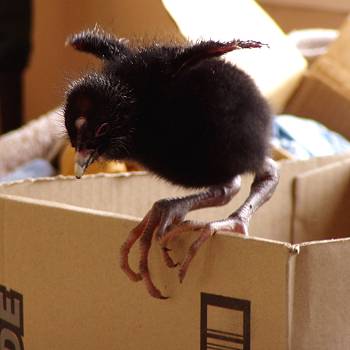 This morning, after spending a few days restrained, when necessary, in a tall-sided box, Pukeko has learnt to escape again.  It is growing at a great rate and now stands very tall, when it stretches up, so can hook its bill over the edge of the box, then scrabble up with its feet!  It is also getting rather too big for the little box in which I've been putting it to bed at night.  Last night I stopped putting the jar of hot water in with it, since there really wasn't quite enough room, and I think it's big enough now to maintain its own body heat overnight in the box in the hot-water cupboard. 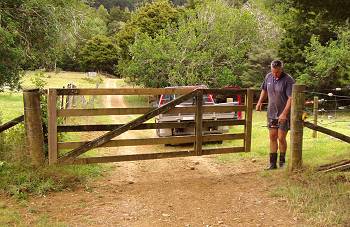 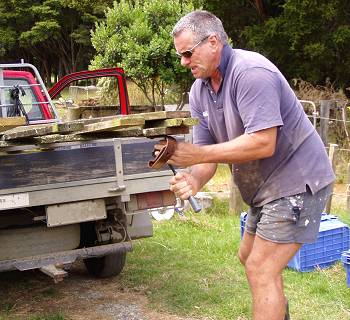 On his way through one of the lanes this week, the mulcher man caught one of our gates, ripping it off its hinges and tearing it apart!  Stephan spent some time this morning, putting it back together, with replacement timber, bolts, hinge straps and then rehung it...
Tuesday the 7th 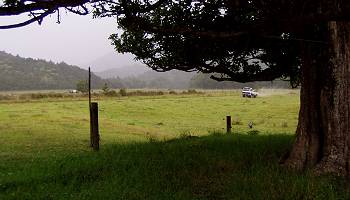 Rain has been forecast and for once the forecast was right!  When I awoke this morning, the air was very, very still, so I phoned Ryan, who spreads our fert and asked him to pop over with a load on the truck.  He arrived within the hour, just as the rain began, very lightly, to fall.  He managed to get up the hills at the back of the farm, then finished off, in slightly heavier rain, around the flats.
I am delighted, having fertilizer and rain!  Often it's a bit of a problem, having a dry enough farm for the truck to get around and then having to wait for rain to arrive to wash the stuff in so the cattle can graze the fertilized paddocks.  This was the best of all possibilities!

I weighed the cattle on Wednesday night and drafted out the steers and heifers I intended to send to the weaner fair at Peria, today.  Looking at the youngest of the steer calves, I decided I really couldn't take him away from his mother yet.  He would live, but it wouldn't be good practice to remove him at only 3½ months old, so the three steers will remain here for a while longer.  The other decision to be made was whether or not to keep the last daughter of Quadrille 07, since the little grey heifer (his only other daughter this year) may not be able to join the breeding herd.  In the end I decided that I have a number of better daughters in the herd and she simply wasn't quite up to the mark - she'll probably be a fine animal, but she has not shown the early growth I like to see. 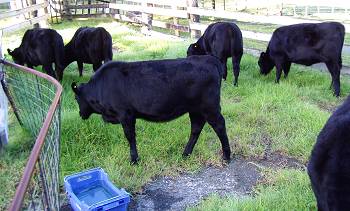 This morning, just before the truck was due to arrive, I drafted the cows from the calves, filled in the Animal Status Declaration form which must go with them, and waited.

After the calves had gone, I put the cows in the paddock just next to the yards, so that they could remain near where they'd last seen their calves.  Taking them further out on the farm just asks for trouble, as they will try to get back down to the yards again.

The sale went alright.  The prices on my heifers at this sale are often not so great because they're two or three months younger than many of the others there - although standing in a pen between others which were presumably older than they, they looked pretty much the same size.  (Most farmers here calve July - September and we're October/November.)  These days I only send the bottom cut of my heifers to the sale for people to buy on a sight-seen basis, preferring to pre-sell the rest privately and with all their production and pedigree information - email us if you'd like to discuss that further for next year's crop. 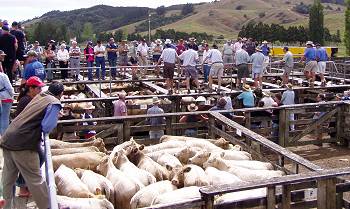 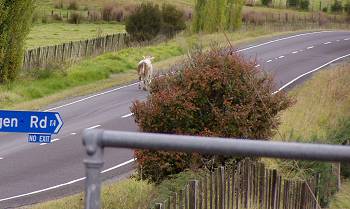 Part-way through the sale, some cattle were being drafted off to the side somewhere for some reason and one of them became separated from the others, and in her resulting confusion decided that going over the outside rails of the yards and onto the road was her best option and she was away down the road at a smart trot!  It took a number of men (some with obviously more and less stock sense than others) and a mob of cattle from a paddock over the road, to eventually retrieve her in a state of immense stress!