The week beginning the 2nd of September 2006.
Saturday the 2nd 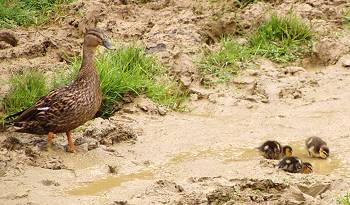 It's duckling season!  This is a wild Mallard duck and her (in total, five) ducklings, dabbling around on the track which goes past the house out to the farm.  It is unlikely that she'll see any of her children reach adolescence, the weather still being reasonably cold and there being a number of hawks in the area. 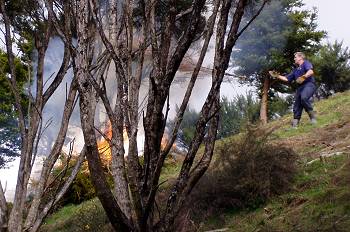 Smoke like this would be a very alarming sight in the middle of summer, but at this time of the year, and bearing in mind I know where it's coming from, it's rather satisfying!  Stephan has been burning more of the cut scrub on the first face of the PWHS paddock.  I can't find any pictures of this area before he started the original cutting, but now it's starting to look like a steep paddock, rather than just trees!  As can be seen by the presence of some trees in the foreground, many are being left in situ to provide shelter and shade and to help stabilise the hill.  Stephan's been pruning most of the big trees up as high as he can reach, so we can see the cattle and so grass will grow beneath them.

The other benefit of pruning the trees is that once the whole paddock is renovated and subdivided again, the cows, during mating season, won't have nearly so many things to catch their heat indicators on! 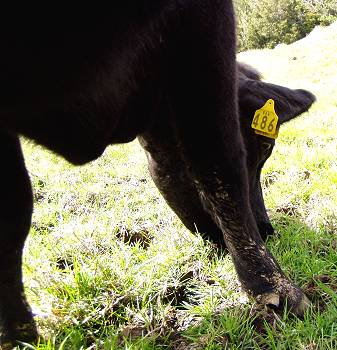 Up on the hill over the road, there's a sunny, sheltered spot, where the young heifers have been gathering on most days.  I went up to check them this afternoon and spent some time grooming and stroking those which enjoy such attention.  This is the view from where I was crouching, as I scratched and removed the ticks from around 486's developing udder.  There are a few areas they can't easily reach for itching and they really enjoy a scratch, especially if it dislodges the unwelcome parasites!  486 isn't grazing, just has her nose resting on the ground, as she stands in a near-trance. 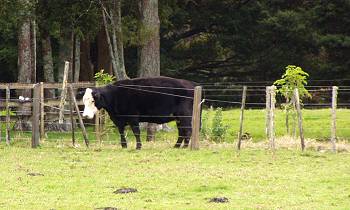 Our one remaining "fence crawler" cow.  307 does this quite frequently and has become skilled at it and if she keeps doing it, which of course she will, I'll set her the ultimate (insurmountable) challenge of getting out of a truck on the way to the works.  Fortunately her forays into the native tree plantings haven't resulted in much damage, since for some reason she doesn't eat the trees. 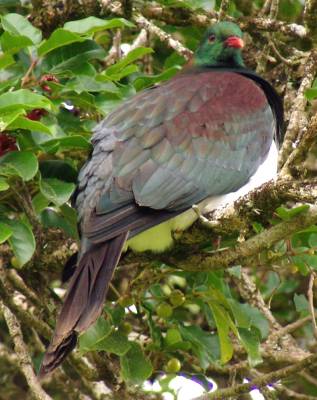 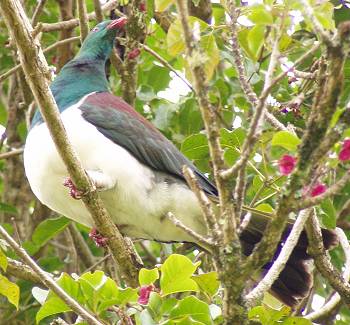 A Kukupa (native wood-pigeon) in a Puriri tree.  I am acutely aware when I take pictures of these birds, that one day I will probably look back on them and be glad I did, because they will quite likely go extinct in my lifetime. 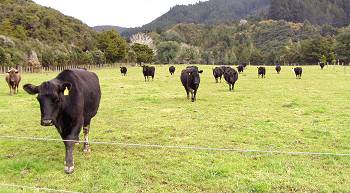 This is the fat cow mob, on very little grass, many of whom are now not as well-conditioned as some of the thin cow mob.  I'm moving them around increasingly quickly as the grass starts to grow, so they'll start to build up their reserves again.

Stephan's out clearing and burning again - there's a wisp of smoke in the photo from the next fire site around the hill.  He's like a hurricane - with some careful, tidy pruning thrown in!

I went off to Wellington again this morning, for a follow-up meeting of representatives from the national Women in Farming/Agribusiness groups with Rural Women New Zealand, to complete our organisation of a more structured national framework.

This is Kaitaia, with 90-mile Beach in the distance.  Within a minute of this photo, the plane passed over the farm, but there was too much haze and cloud for any decent pictures - I wanted to see how much of the scrub-clearing was visible from above! 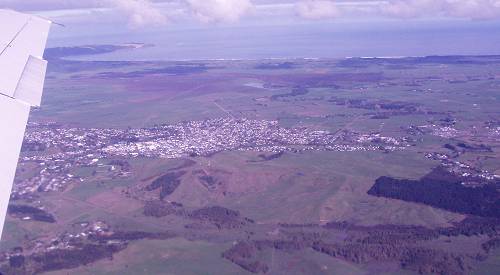 On my arrival in Wellington, I caught up with the women in the RWNZ office, then walked down into town.  I contemplated going into Parliament for a stint in the public gallery of the House of Representatives, and am rather glad I didn't, because the news over the following days was full of the appalling behaviour of the members therein.  I suspect it may have caused me to feel quite cross!

I wandered around town looking at things, visited the library and looked up some books I can't get up here, then later went back down to Te Papa to have a look at a water-colour exhibition running in parallel with the Constable exhibition and then stumbled upon a mini-lecture in the cafe there, on exploration of the deep seas around Aotearoa.  Unfortunately I had to leave before the question and answer session had finished, in order to get to the Gryphon Theatre for The Boys Next Door.  It was an excellent performance and play, which I enjoyed very much.

Friday was meeting day, during which we hashed out the rest of the details of the ongoing organisation of the Women in Farming/Agribusiness groups.

At the end of the day I got a lift down to the railway station and found the train which goes to Palmerston North.  I'd been warned that to get off at Shannon (just south of Palmerston North) I'd need to be in one of the front two carriages.  After getting on and watching a number of people queuing at the front of the carriage, I realised I was very conveniently in the carriage behind the one containing the bar!  Eventually the train set off and the queue diminished and the young bloke sitting next to me, with whom I'd initiated some conversation, went and acquired drinks for us and we continued a very pleasant trip.

I was met at Shannon by my hosts for the weekend, Fran and L-J, who took me home to another G&T and a fabulous home-grown beef steak dinner.  Unfortunately their next steak-producer, a nine-month-old heifer, was on heat outside the house, so it wasn't the quietest night, but very comfortable nonetheless.