The week beginning 7th of January 2006.
Saturday the 7th

My young cousin, Matthew, one of our guests of last summer, came up from Auckland with his mother, May, on the plane today.  We all went for a walk up the hill over the road this evening, and while I checked the cows, they walked to the highest point to see what they could see. 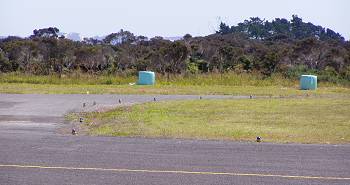 I took May back to the airport this afternoon, to return home to Auckland.  When she arrived yesterday she commented that she knew they were in the right place when they came in over the runway yesterday and there were bales of cattle feed all the way up the edge of the tarmac! 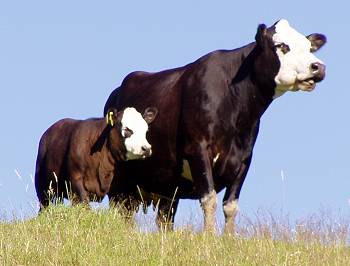 The evenings at present are extremely warm, but very pleasant times of the day.  This is the most summer-like summer we've had in many years.

This is 114 and 517 (little sister to 470, who used to appear on the website's front page) taken from the bottom of the hill, as the cows stood at the top in the sunshine.

Ryan turned up in the big fertilizer truck this morning and spread some more Lime.  I rode around on my wee bike opening gates and returned frequently to watch what was happening in the insemination mob - Ingrid 17 wasn't due to return to heat (if not pregnant from her first insemination) for another couple of days, but she was of immense interest to Ranu, who was most definitely hot!  I was trying to work out whether Ingrid was just being surprisingly cooperative - she wasn't quite standing when she was mounted, but nor was she running away as determinedly as I would expect her to if not coming on as well.  I have observed a number of cows with the bull, which appear to be on heat again three weeks after they have actually become pregnant, to the extent that they will tolerate re-mating by the bull, but I'm not sure that cows in a no-bull situation would show as much overt false-heat activity.

As the day progressed, it became pretty obvious that Ingrid was indeed on heat and required a second insemination. 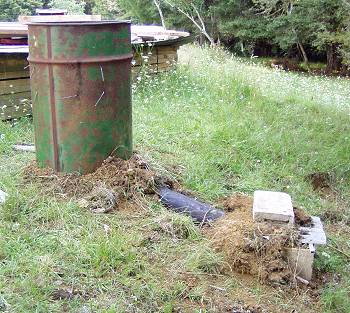 Stephan brought six Mullet home yesterday, tied together with a bit of flax, which he'd been given by someone in Panguru.  So today we did a bit of research and worked out how to build a smoker, since they are best eaten that way.

We have quite a bit of fun coming up with ideas together for such things, since we think quite differently and often complementarily.  Eventually we settled on this arrangement, with a small, smouldering fire to burn fresh Manuka sawdust, with an old fire-flue to take the smoke up into the drum (without very much heat) which was draped with a number of damp sacks, after the fish was laid on wire racks inside.  We smoked them for about five hours and then brought them in to share with some very fortunate guests who had turned up at just the right time to be invited to dinner!  The fish was the best we've ever tasted!!!

The cattle over the road were all crushed together in the gateway at the bottom of the other end of the paddock this morning, to the extent that I worried they might cause the gate to burst open and allow them all onto the road!  I think the attraction was a neighbour's hot heifer just along the road and the fact that our direct neighbour's cattle were down in that same corner.

Moving the cattle a little later in the day, when things had quietened down again, I noticed that my favourite commercial heifer of the year, 506, was limping badly, having suffered some injury to her back leg.  I shall keep the mob in a flat area for a few days and watch her carefully. 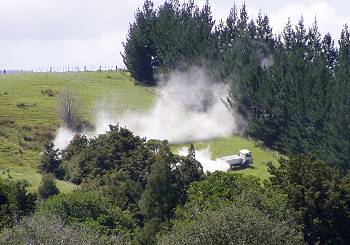 Ryan came out again today to continue spreading lime and because the afternoon was so calm, we were able to send him up the hill over the road.  Matthew and Stephan went with him and I watched with my usual sense of awe and horror at how far and where Ryan can take his truck!  It doesn't look too daring in the picture, but to get down into that area involves driving up and down some fairly steep bits of hill! 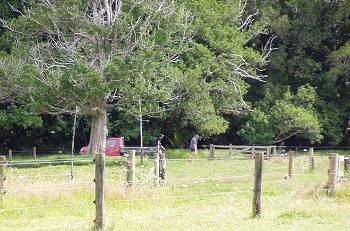 The gate between the second and third flats paddock has been hanging off only one hinge for a number of months and having had to lift it just once too often, I submitted a serious complaint to the fencing department and suggested that the problem be rectified immediately!!!

About a week later, the gate is now rehung on two hinges and no longer needs to be lifted to open and close. 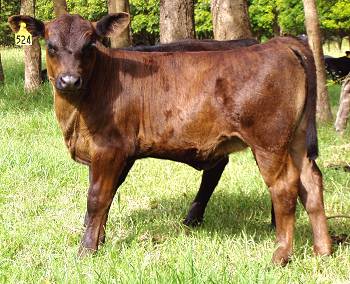 This is 348's second backwards calf, the last calf of this season.  As has been the case with all 348's daughters, she's growing fast and looking like a really nice animal!  Even though 348 had to be assisted to calve and was the last to do so, she has already been remated by the bull - surprising because often after such interference there'll be a bit of uterine infection which will slow the cow's return to oestrus and being the last to calve, I'd have expected her to take a little longer to get back in calf this season.  Her mother, the old grey cow #16, used to cycle as soon as three weeks after calving, so it appears she has handed that trait onto her daughter.

A number of people search for "cattle mating pictures" on the internet and end up at this site and I can't figure out whether they have bovine pornography in mind or an interest in the mechanics of cattle reproduction; so here is a picture.  This is the yearling bull #26 and two-year-old heifer #446.  The bull was actually falling back off the cow by the time I took this picture, since she wasn't quite in standing heat yet and had walked out from under him. 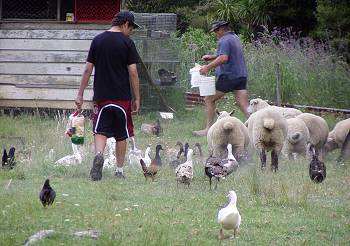 I rather like this picture: Matthew and Stephan going to feed the assorted poultry, accompanied by the sheep, which are determined to get their faces into the maize bucket!

After a couple of days of rest, little 506 with the injured leg, is beginning to move with more ease.  Her hock joint (the backwards "knee" in the back leg) has been about twice its normal size, but she is able to carry more weight on it today.

This afternoon, after replacing the heat indicators on the cows in the insemination mob, I evicted Isla and her indicator-chewing calf from the mob, sending them off to join bull #26 and the other cows instead.  Isla hasn't met an adult bull in her entire life, so I hope she won't find the experience too traumatising!