I went out thinking I'd go and look for my hat, but felt too weary to climb back up through all the gorse out the back.  Having found the three cows I'd not seen yesterday, I decided to take a different route home, hunting ragwort in different places. 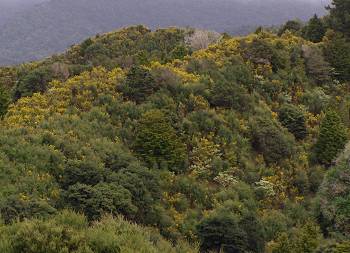 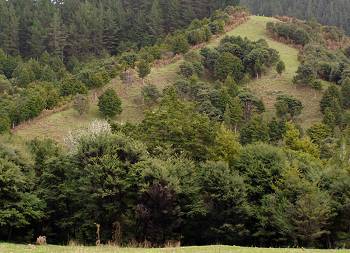 From the side of the hill at the eastern end of the Frog paddock, these two hills make for an interesting comparison between gorse regrowth and where the plants have been cleared and controlled.  The gorse is easy to see at this time of year, being in flower and brightly yellow.  Between the two photos is the stand of pine trees, most of which can be seen in the right-hand picture, with a little in the top corner of the left-hand one. 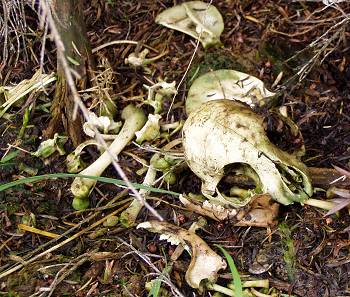 Beneath a gorse bush at my feet, where I stood looking at the view in those photographs was the best sort of kitten to find out in the hills: a long-dead one.  I've always been fascinated by skeletal remains, and figuring out what sort of creature they might have been.
This one's teeth were pretty telling, as well as there being a claw amongst the little paw bones.  The back molars in the lower jaw bones are not fully erupted and I suspect the canines are the deciduous ones, making the kitten less than three or four months old when it died.

This is probably one of Spice's relatives, since she was born somewhere across on that cleared hillside in the photo above on the right.

From almost the same spot, after turning around and looking over the hill behind me, the hill paddock over the road.  Four of the R2 heifers are sitting on the hill at the left and further away in that direction is the green of the last ridge in the paddock.

The green at the bottom of the picture is the House paddock on the left and Flat 1, with one of Ivy's grazing companions, on the right.

My apologies to anyone on a slower connection than my moderate-speed dial-up, but there's another big view of the farm.  This one, like one I've posted once before, will tell you the names of the paddocks if you let your mouse pointer hover over them.  They are: House, Windmill, Flats 1, 2 and 3, 5a, b, c and d, Mushroom 1, 2 and 3, and the hill over the road. 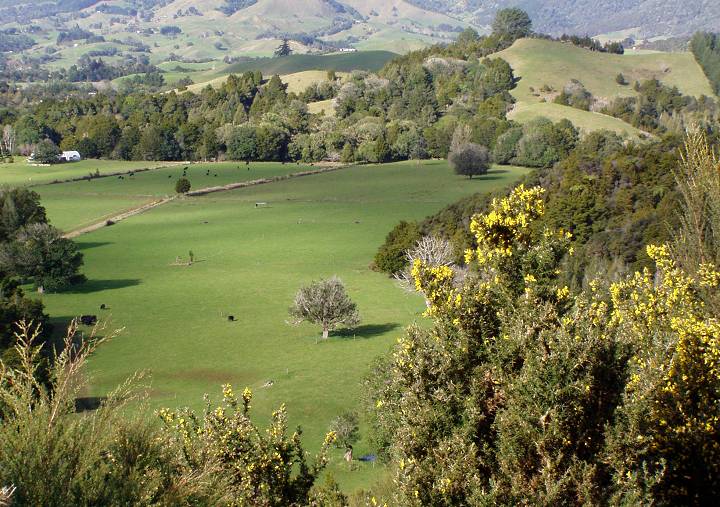 I had climbed up through the scratchy gorse again, attempting to follow the same route I'd taken two days ago when I lost my hat and to make it worth my while, having not found the hat, stopped to take some pictures on this lovely sunny afternoon.
I was standing on the ridge at the top of the Small Hill paddock, on the fenceline it shares with the Big Back, just down the ridge from the Pines.  In the first photo on this page (top left), I would be standing just to the left of centre where there's a little peak and a gap in the gorse. 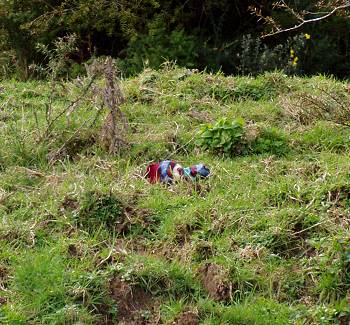 Just as I was thinking, with great tiredness, of the winding way I'd walked over the hill and down through the next two paddocks, I spotted a little splash of colour ahead of me, up near the top of the hill.

But somebody had got to my hat before me and it looks like they had very sharp little teeth.  I have no idea why you'd eat a hat if you were a rat, but so they seem to do.  Several strands of the wool had been cut, rather than pulled, so it was teeth, not a beak and claws, which did the damage.  I thought it would be alright for a couple of nights out in the open, but no.

Another lovely, sunny day.  Everything feels better when the weather's like this.

Looking out the kitchen window this morning, I observed one of the yearling heifers, Dexie 46, with her head in the air as if her neck was being licked by another heifer.  But there were no others near her.  I went and looked through the binoculars to see what was causing her to adopt this pose usually associated with some grooming pleasure, and saw a Mynah bird in her ear, picking out ticks! 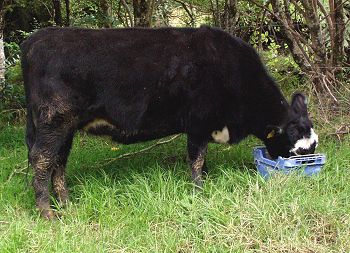 Every morning and evening I take a couple of buckets, containing about 2kg of feednuts, over to Jane's place where Ivy and her two heifer companions are currently grazing.  I dash in to the paddock in a speedy attempt to avoid Ivy getting her nose anywhere near the buckets, and throw her nuts and Magnesium Oxide into a blue bin, then put a smaller lot into another bin for 494 and the third for 470.  The pattern has been established and they know who gets what where.  470 eats a few nuts from the container, then shakes her head at it and upends the whole lot onto the ground, from where she eats the rest.  Funny cow.

I sent some water off for testing today, one sample from our drinking supply which also feeds the farm troughs, and one from the other river source which runs through the south side of the farm.  I want to know if my suspicions are right and there's a lot of iron in the water, causing the copper deficiency in the cattle.  I should have results back in a week or two.

I went in to Kaitaia for a vet Board meeting today, wishing I could have stayed at home, because the rain was pelting down.  Stephan's still away, and I didn't like to think of getting stuck somewhere away from home with no one here.  But by the time I came home, in a fairly damp state, the river hadn't risen much at all. 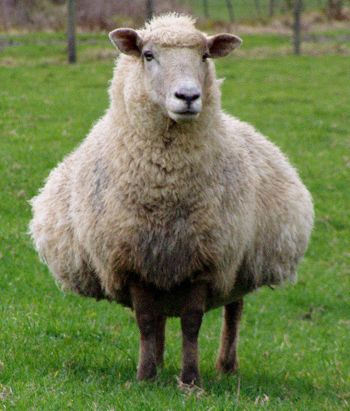 Dotty is looking quite ridiculous.  I suspect there may be more than two lambs in there.  She's obviously finding it difficult to walk about the place very quickly in these last few days of her pregnancy - she's due on Sunday.

I went wandering, hunting weeds, checking cows and found another little patch of Hedge Mustard out the back, under a tree.  I presume the cattle have inadvertently eaten the seeds and so it's turning up in their camping spots, mostly under trees.  I'm keeping a sharp eye out for it, still hoping to eliminate it from the farm, but beginning to wonder if it has already got away on me, in all these secret little plantations.