Two deaths overnight: the sparrow and one of the pheasants.  I can only presume that the sparrow was more injured than I could see.  The dead pheasant probably resulted from a bit of overcrowding in the cardboard box in which they've been sleeping.  I will have to rearrange things for them.

The overnight temperatures have now reached their usual summer levels: 18°C last night and so humid that the air you breathe in is as damp as that which you breathe out!  It's how I imagine breathing water might be like - same temperature and humidity going in and out, so you hardly feel it happening. 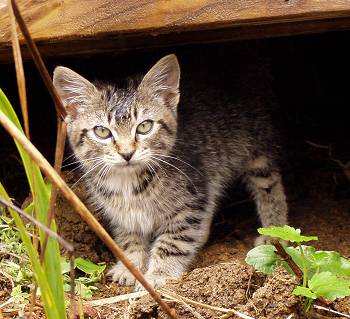 Another kitten!  This one was in the poultry enclosure last week, according to Stephan, scavenging bits of bread, but this morning Stephan heard it under our deck.  I spent a couple of hours coaxing it out so I could see it - partly by talking to it and with the aid of a little food, which it wolfed down!  It took about four hours to get it to come out and eat its food on the deck - at which point it decided that was a good place to sit and watch. 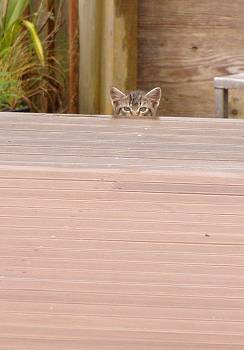 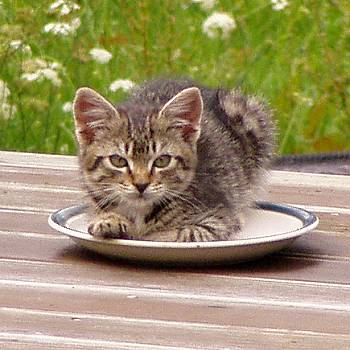 By the evening, the kitten would sneak inside for a bit of food, but as soon as either of us moved, it shot back out the door, along the deck and back underneath again.

I suspect this is one which has been dumped by some irresponsible person, on the side of the road perhaps, with the assumption that such an animal will be able to fend for itself by killing native birds and insects.  Obviously that is not actually the case: this kitten is in poor condition, extremely thin around its hind quarters and ravenously hungry.  Its familiarity with and taste for bread suggests it may have been scavenging amongst our chickens for a while.  I do not understand why people don't de-sex their cats so there is not the need to dispose of unwanted kittens - and if it gets to that point, why they can't do so responsibly, rather than dumping them in areas where they will do untold damage to the wildlife, if they survive at all.  It is cruel, in every way.

We had a three-person Kaitaia Dramatic Society meeting over lunch this afternoon, making plans for the visit of the Royal New Zealand Ballet and their Tutus on Tour appearance in Kaitaia on 15 March.  KDS is the presenter, so we need to arrange the advertising and ticketing.  There being a number of reasons why others of the group could not have joined us, we went ahead and started doing the necessary work.

Mike, Chantelle and their boys came out for a swim later in the afternoon and while we were seeing them off, all but one of the pheasant chicks flew out of their small enclosure and followed our voices down the driveway.  We eventually herded them back in the right direction and suddenly the kitten dashed out, pounced on one of them and disappeared back under the deck!  There was nothing we could have done in time to save the bird, so have had to accept the way of such things and get used to counting only to six.  Stephan went and fetched the large (and heavy) fully-enclosed chicken cage from its usual place and brought it down to the garden, so the pheasants could more safely continue their young lives.

The hen turkey which successfully raised the last six chicks has produced another ten!  Since she was such a good mother last time, we'll leave them with her and provide food for them to assist in their survival.

Stephan keeps saying he'll shear the rest of the lambs, so I thought I'd better get some pictures of them before their appearance is changed!  Fourth from the left, at the back, is the one shorn lamb. 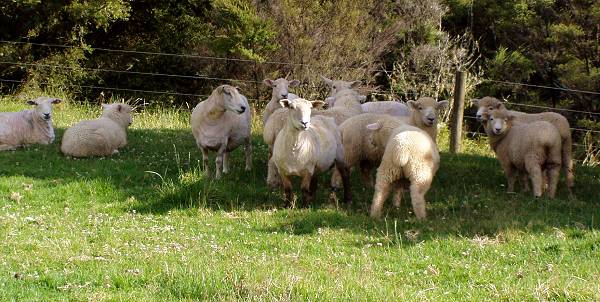 Some German people arrived at our gate this afternoon, looking for someone they had arranged to meet further up the valley in an hour or so.  Their English was not terribly good and my German is non-existent, so I'm not sure that we understood each other completely.  I found their visit interesting because they seemed to be looking for somewhere to rent on a long-term basis which would allow them to grow their own food, keep a few animals and build somewhere to live.  They were quite insistent that on a property like ours we must have such a corner to rent to them, so I explained what we do here and took them for a walk to see some of the cattle.

Thinking about it more later, I realised that they probably couldn't quite believe or understand that we have here the number of animals the land will support and that although they could only see a few of them, there are other times when the now-empty paddocks would be covered with cattle on their usual grazing round.  I suppose that in Europe, this much land would be intensively farmed and that it must have appeared to them that we were not really using all this space at all. 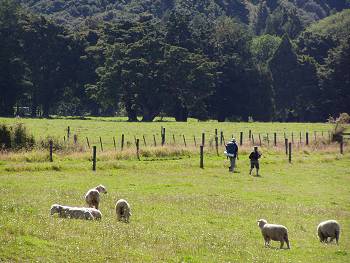 Mike brought his eldest son, Eric, out this evening and together they set out to find a camping spot near some rabbits, which they hoped to hunt. 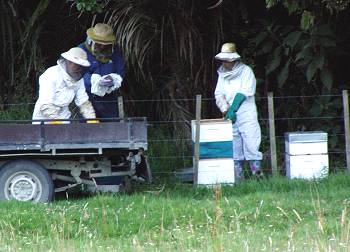 Later in the evening, Ros and Alan arrived to remove their beehives to a more suitable location.  We had all thought the position would be good for the bees, but they've not been happy there, evidenced by the number of swarms and the amount of honey they've produced during their stay.  Stephan has worked with bees before, so offered to give them a hand to lift the hives over the fence to the back of the ute.  One of the hives was apparently full of very angry bees and the three of them had to leave the area at one point until they settled a little - which from the number still attacking Stephan in the light of the ute later on, didn't altogether appear to have happened!

This being the first evening for several days when the sky has been clear of cloud, I had decided to climb the hill over the road to see what I could see of Comet McNaught.  Stephan and I saw it a few days ago, early in the evening over the top of the hills, between the passing clouds and it looked very spectacular, not long after the sun had set.  So this evening I expected to see it at much the same time but thought I'd be able to see it for longer if I were up the hill.  There being mad bees around the driveway, I went across the flats, over the river and up the hill from the other gateway.  I sat and watched the valley in the gathering dusk as the stars started to appear in the sky, but there was no comet.

When it was almost too dark to see the ground, I decided I'd better head down the hill again.  I thought, as I descended, that we here (and this must be true for many but not all) are the luckiest people in the history of the planet: we are quite possibly at the junction of the rise of useful technology and the decline of the environment in which we may use it.  From that hill I could talk to almost anyone I know in the world, experience silence and clear, good air and know that barring some disaster, I would continue to have enough to eat and a safe place to live.  I'm also aware that I'm extremely fortunate to be able to recognise those things.

I walked home, went inside, looked out the window and there was the comet. 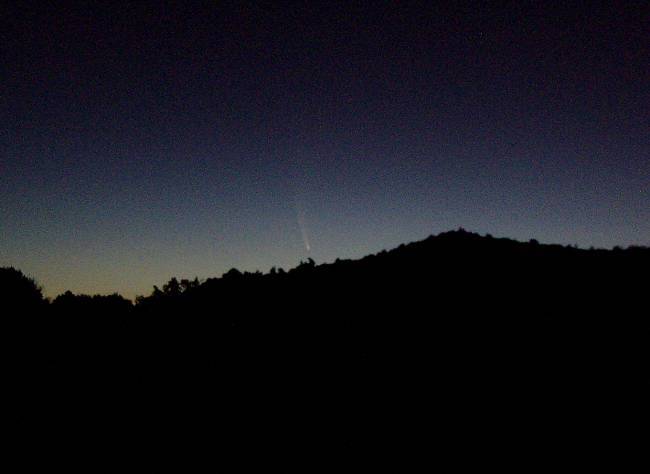 It was rather more spectacular than in the picture, but I'm not entirely sure how to take near-dark pictures with my camera. 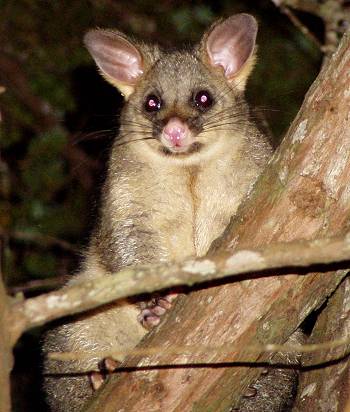 On many occasions in the last few weeks I've seen several opossums in the fields as I've been checking the cattle, so decided I'd better take either the rifle or the camera with me tonight.  This is a 'possum, in a Totara tree.

In the torch-light their eyes glow red (as do those of the Ruru, or Morepork, the small native owl, so one needs to identify the target when out shooting), unlike sheep, cattle and cats' eyes which all glow bright silvery white.

We need to get out and do some 'possum control, but I've been putting it off until I've finished my late-night cattle mating checks.