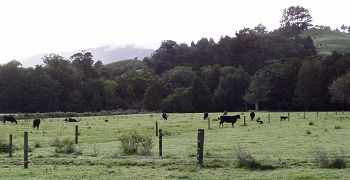 All was calm this morning.  360 has a bull calf born sometime in the night and 323 produced a heifer just after 8am.
Sometime after 9am things started getting horribly noisy as the Northern Sports Car Club began to stamp their excessively large ecological footprint all over our valley with yet another car rally.  I loathe them.  I can't fathom anyone still doing this sort of thing in the midst of so much discussion of climate change, peak oil, excessive consumption and waste...

Worst of all is the effect on my new mothers, who all rush off as far as they can from the noise, which means they all end up at the top ends of their paddocks in an upset bunch.  I was relieved that none of the yet-to-calve cows looked like she'd be calving during the morning.
Ivy and 470 with her new calf were in the Pig paddock out by the road, along with the hoggets and the two wethers and they all came thundering out of the paddock when the first back-firing car came sliding around the corner above them. 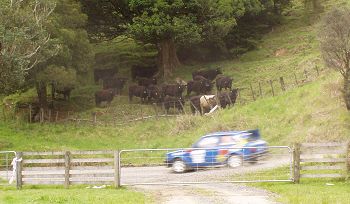 The yearling heifers went careering along the hillside over the road and disappeared for an hour or so.  After I'd ensured all the others were beginning to settle down, I went out to walk up the hill and make sure the heifers were alright.  I didn't have to go very far because to my enormous surprise, they were all standing down by the gateway just above the road, barely flinching as the back-firing stone-throwing noise-machines hurtled past.

After the noise had all gone away, I moved the sheep out of the House paddock and across to Flat 1, leaving the cows I need to keep in the House paddock with a bit more grass.  I hadn't wanted to move them until Yvette and her lambs were clearly thriving.
Yvette and the two little rams are the three at the left of the picture.

Our one three-year-old first-calver, Ranu 31, had a heifer calf this evening, without too much bother.  This is the fourth calf this year from an insemination sire and the first heifer I've had sired by L T 598 Bando 9074.

I moved some of the cows and calves this afternoon and watched a hilarious confrontation between three-day-old Fuzzy calf and Delilah 36!  I don't think I've seen such plucky behaviour from such a young calf - at least not with an animal which isn't her mother or of her own size. 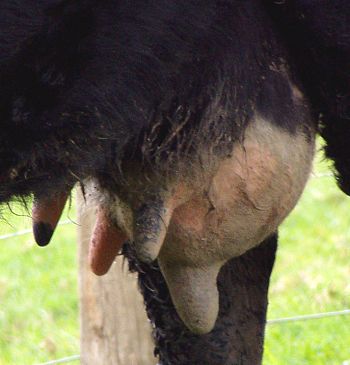 This must be a very uncomfortable situation.  371, who had to be helped by the vet to calve, has a fairly horrible udder and the calf has obviously only required three quarters of it so far, leaving the last quarter still in a swollen, hard state.  This happens with most of the cows, if they have more milk than a calf first needs, but in some of them it is more obvious than in others.  The calf will eventually catch up with the milk supply and take the milk from that quarter and things will even up quite healthily.  If she's like her sister of last year, 539, she'll get more than she needs and run to fat!

I'm very frustrated with Ingrette.  Today I've been thinking we'll have to shoot her.  Most of the time I think there's a good chance that'll be the eventual outcome, but I continue to work with her because there still seems to be some hope she'll improve.  I don't feel like that today.

418, my lovely born-backwards cow, was in labour around 5pm, looking towards and calling to one or more of the little calves in the neighbouring paddock, as cows often do just before they have their own.  She wasn't doing much more though, so I mixed up the nightly molasses took it over to the paddock, so I could have a closer look at what she was doing.  When I arrived there and poured the molasses into the bins in the paddock, I was surprised to note that Abigail remained lying down, since she's very keen on the sticky black treat.  I continued to watch her for several minutes as I sheltered under a tree while a nasty shower inconveniently fell.  Eventually she got up, very uncomfortably and when I checked her more closely, I noticed she had quite a bit of bloody mucous around her tail.  Very odd, since she didn't appear to be in labour.

Deciding not to panic, I just wandered around and kept an eye on 418, who eventually got on with her job and showed me there really was a calf in the right position inside her, which she delivered after even more delay, just after 7.30pm.

Abigail produced a big bag of fluid at around that same time, but continued to behave unusually and the light became dimmer as dark fell and so I walked home to get the torch.  When I came back, Abigail had one little foot sticking out and when she lay down and pushed, that was still all she had.  I tried having a feel inside her while she lay there, but she got up.  While she stood I tried again and was able to feel in far enough to find the underside of the other foot where it was jammed against the top of Abigail's pelvis.  I unhooked it, then felt further in to ensure the head was where it should be and Abigail got on with her labour normally, producing the calf within the next few minutes.  As usual her calf had room enough to move its head around as it was pushed out, so it's not a big bulky calf, just an oddly stuck one.

I asked Mary-Ruth, my veterinarian friend, about this later and she said it's not an uncommon malpresentation and can cause significant problems if the calf's foot presses hard up into the spinal nerve.  I presume that was the cause of Abigail's obvious discomfort and unusual movement in her back end.

We weighed Abigail's bull calf this morning and he's a small 35kg.  I'm glad he's ok.  I'm glad I watch my cows closely.  I'm even gladder that some of them will let me do extraordinary things to them while they stand around in open fields! 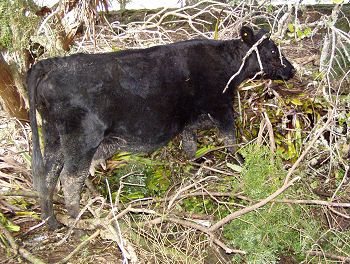 It took me an hour to find this cow this morning.  This is 371, again.  I'd found the other ten cows and all eleven calves and then set off on a long walk around the whole paddock on a hunt for her.  When I say paddock, don't imagine some rolling, grassy, sunny plain; it is the Swamp/Frog paddock, which involves a very winding stream, scrub-covered hillsides, gullies, a swamp, and is long and thin in its overall shape, so takes a while to get around.
It was when I'd given up and was walking in the direction of home, that I looked across through some trees and saw the violent movement of a tree branch, which indicated the presence of something larger than a bird.  Here 371 stood, in the middle of a great pile of epiphytes which had fallen with a Puriri branch from far above, having a private feast. 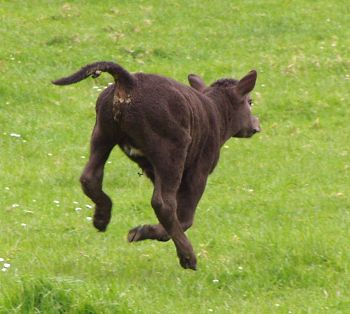 Fuzzy's calf, on the run.  I think these hypotrichosis calves look like they're in their underwear, because under the short, curly hair, it's possible to see every muscle and bone.  She and her mother are in a mob of ten cows and their calves, in the Mushroom paddock.

I let the other mob, of eleven cows and their calves, into the neighbouring paddock, so they can spend some time near each other before I combine the two mobs. 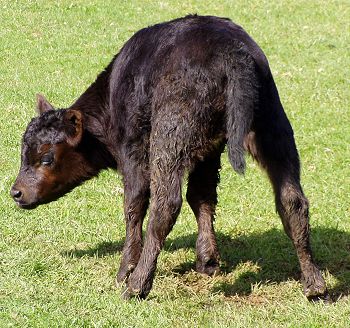 Ingrette fell over oddly two or three days ago and I heard something crack.  She seems to be able to stand as well as before, but her left knee now swivels out oddly.  It used to stick out at a bit of an angle when she was first standing, but that gradually resolved.

She continues to appear comfortable enough, so I'm unsure how much significance to place on the noise I heard. 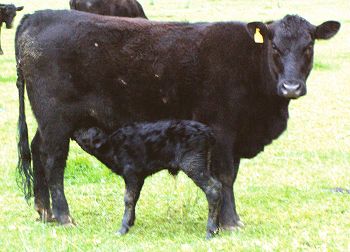 What a lovely thing to find, first thing this morning: two-year-old Ranu 34 and her bull calf.

After helping the first two two-year-olds, I was getting quite nervous about Ranu, because she's the smallest of the heifers, although she is in the best body condition.  The calf weighed 28kg. 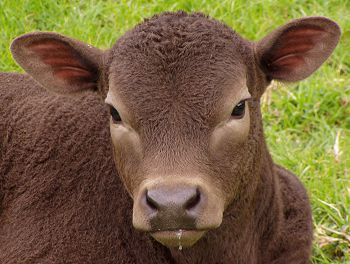 Fuzzy's calf, again.  I find the odd coloured calves in my herd quite fascinating. 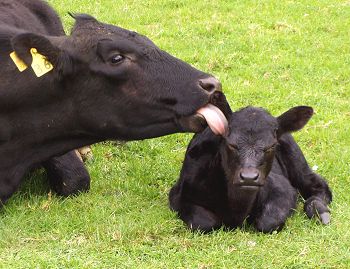 Sitting very near the fuzzy calf were Delilah 36 and her bull calf.

Ingrette has been behaving differently: leaning over onto her right leg more, using the muscles to balance herself, rather than falling over to the left as she so often has until now.  I think this is progress.

Fleur 28 produced a bull calf just as I arrived in her paddock at 9.30pm, number two for her and number 27 for this season.  I watched 506 for a couple of minutes as she lay on the ground and her calf had a fit of violent kicking inside her!  She seemed unperturbed.

It rained again last night, so the ground is sodden with puddles again this morning and it's really cold.  How will we ever grow enough grass for all these animals?

There are four Starling eggs in the mail box.

Quanda 09 produced a bull calf (again) this afternoon and just before dark her sister, Queenly 23 produced a heifer, sired by my last straw of Te Mania Unlimited.

At 10pm when I checked on the cows, I discovered Quanda standing quietly looking at a deep drain along the top of the Flat 4 paddock.  Standing silently below her was her calf.  She must have come out into the main part of the paddock and he would have walked in a straight line to get to her, and walked into the drain.  I got down with him and heaved him up the side of the drain to his mother and they ran off across the paddock together without so much as a thank you.  Rude buggers. 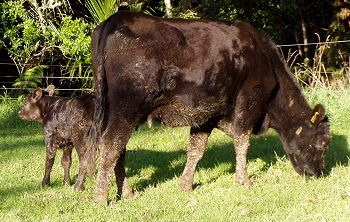 I like little Queenly 23, so I'm pleased she now has a daughter.  I like her because she is of good conformation, has lovely temperament, and raised a good first calf last year as a two-year-old.

This calf is number 29 for the season.