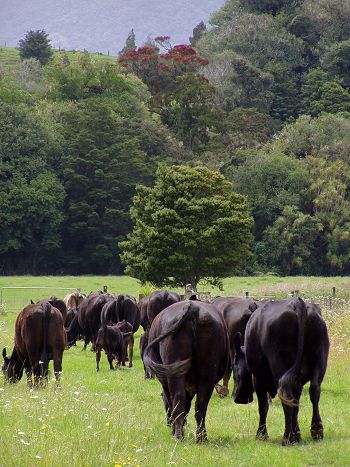 I brought the mob of 19 cows and 18 calves in to the yards to do the vaccinating and as much tagging as we could with the remaining tags - there are enough for the stud calves and two left for the commercial calves.

I'm taking photos of anything I can with the Rata in the background; it's so beautiful. 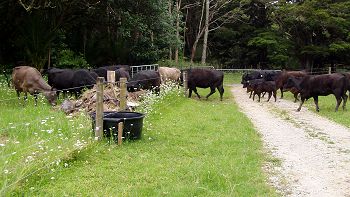 When we'd finished the job with the calves, I left them to settle for a little while and we had a bit of lunch.  They took some convincing to go into the newly fenced triangle area to graze it down while they were here.  They're funny to watch - all it takes is for one cow to spot the new gateway and head for it and all the others will see her and follow. 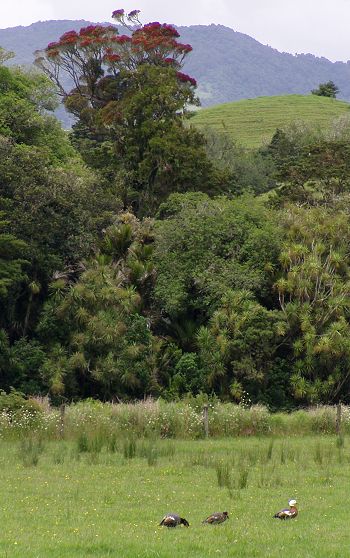 I took the cows and calves out to one of the flats paddocks for the night, so the little (newly castrated) bulls didn't have too far to go in their tender state.

In the adjacent paddock the injured Putangitangi (Paradise Duck) is still being protected by her parents.  There's a rather splendid tree in the background, in case you hadn't noticed.

(I hope these long photos are fitting in to others' screens.  If you press the F11 button it may change your display to 'full screen' which will enlarge your viewing area - and press it again to restore your usual view.)

Back down the lane a Pukeko leapt off its nest and dashed away through the grass, so I had a look to see where it had been.  There is one bird on the nest and at least another two associated with it, which can be seen creeping away through the rushes in a nearby paddock.  They form communal nesting groups - I've seen up to five adult birds in a family group - and I can't remember what I've read about who does the incubation, whether it's a main hen bird, or any of them. 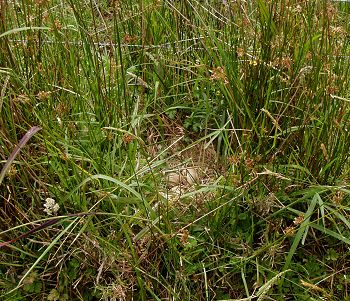 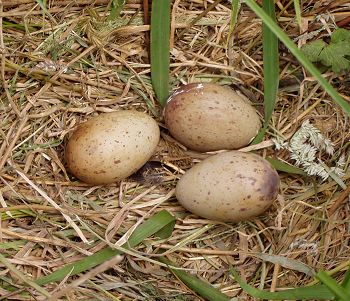 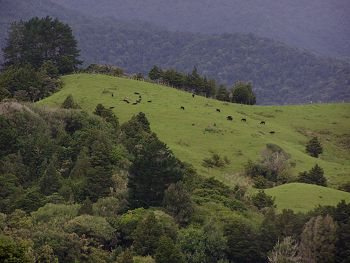 Looking back the other way I could only count nineteen heifers up on the hill over the road, so went for a walk up there to make sure they were all safe and happy. 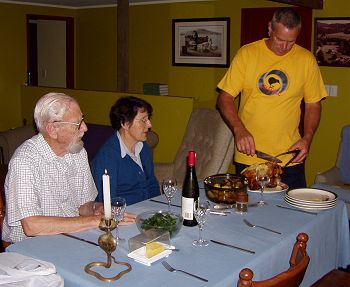 Because of my cattle-mating duties, we won't be going anywhere at Christmas time, so those who wish to celebrate it in our presence come here and do it when they can.  Stephan bought a ham and he - under Jill's instruction with the help of Mrs Beeton (old cookery book) - baked it for the required time, then glazed it and we ate it for dinner with Jill and Bruce.

Jill had brought one of her traditional Christmas Puddings which was traditionally flamed with Brandy and eaten with freshly whipped cream and a great deal of enjoyment. 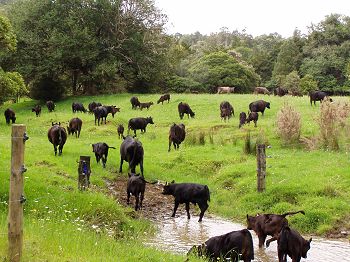 After grazing the two mobs of cows and calves in adjacent paddocks for 24 hours, I mixed them together this morning in a new paddock.  It was a fairly smooth process, with only one three-year-old causing any problems, as she chased anybody she didn't know around the paddock. 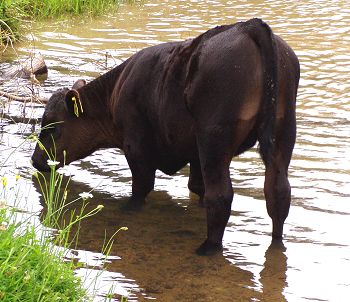 This is Demelza's son, whose sire is Felton's Meat Packer 62.  He has all the presence of his elder brother, #45.  Unfortunately there's some white in front of his testicles, which isn't disastrous, but not ideal either.  Some stud breeders would throw him out of their herd; but he is registerable and if he continues to grow into the animal he's looking like he'll become, he'll do me. 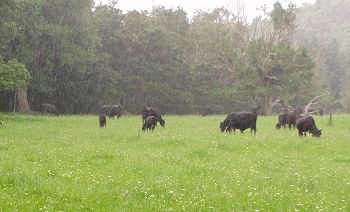 I wandered around amongst the cattle taking pictures of calves for a while, in between showers of rain during which I waited under the trees.  The rain started filling more and more of the time and I was getting damp, so returned home, at which point it pelted down and we had 55mm of rain by the next morning!

Fluffy, round lambs and their shorn mothers, all doing really well.  The ewe at the far left is the hogget, looking nicely rounded and probably our pick for the Boxing Day spit.

The rain has delayed my mating start a little, so today, with some urgency, we got on with sorting the cattle.  The first job was to get the yearling heifers off the hill over the road and down to the yards and over the scales, to determine which of them will join the breeding herd and which have failed to make the grade. 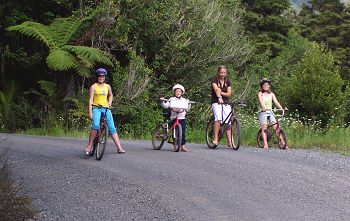 We had a bit of impromptu help from some passing cyclists!  Because they came around the corner just as the heifers came to the gate, we asked the children to wait for a few minutes while we brought the heifers across the road.

Dane, the fifth in the group, was waiting a little further down, ready to flag down any approaching traffic from the other direction.

Of the 21 heifers, sixteen are now 320kg and above.  Disappointingly, four of the five small heifers are pedigree animals.  Three of those are a month or so younger than most of the others, but thinking it through during the day, I recognise that they're younger because their mothers were late getting in calf and whatever reasons there were for that delay, I want to weed them out of the breeding herd, however nice their pedigrees may be.  In a herd which routinely calves three-year-old heifers for the first time they will fit in very nicely and be great animals - and I could choose to revisit their fate again in autumn, with that in mind, if I decide I'm happy to keep a few older first-calvers in the herd - after all, most of the older cattle started calving at that age.  Can you tell I'm undecided on this point?

We weighed Ivy and drenched her, since she's still looking very light.  We weighed the three calves and Isla as well: Isla is 626kg in her current fantastic condition; her calf is 83.6kg (growth rate = 1.64kg/day); Imagen's daugher is 89.2kg (growth rate = 1.76kg/day); and Ivy's squiglet is half the size of the other two, at 41.9kg (growth rate = .8kg/day).  At that slow rate of growth, there's no way that tiny calf will catch up with any of the others.  Ivy's udder has been looking rather less full than it usually does at this stage of lactation.

I drafted the rest of the cows into various mobs, the largest lot for bull #43, a few for each of #54 and #49, the cull cows went in with #55, some of the heifers and a couple of cows with #45 and I'll have twenty for insemination.  This is an unreasonable number of bull mobs for the small herd of cows, but I like to try out my yearling bulls and there's enough grass around this year to spread the cows out.

The biggest and eldest heifer, #545, was on heat for much of the day and I had meant to put her out with bull #45, but by the time I got everything sorted, she'd stopped standing*, so I had to inseminate her instead and it went very well. (*I don't mean she'd fallen over, or sat down, but that she was no longer standing still to be ridden by any of the others, as she had done when properly on heat.)  Heifers can be tricky, but this one wasn't, with her reproductive organs being nicely firm and easy to find.  Heifers often have very small, flacid cervixes which are horribly difficult to find and manipulate.  She got the semen of L T 598 Bando 9074, a bull I've used for a couple of years, for his low birthweights and good growth.  Last year his calves were bulls to commercial heifers, so were sold as weaner steers.  This year we have a couple of heifer calves, a steer and one stud bull calf sired by him. 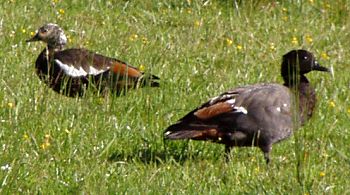 The injured daughter duck with her father.  Her head looks like it'll be completely white by the end of the month!