The week beginning the 15th of September 2007.
Saturday the 15th 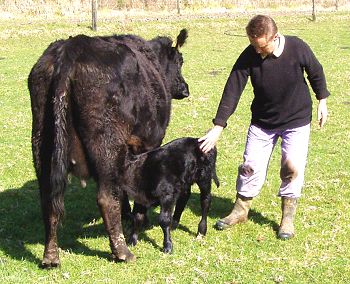 Little calf is doing well, and although still reliant on my holding her up while she feeds, can take much more of her own weight on her left leg.

We weighed her this afternoon; she's now 33kg, so has been gaining just over a kilogram each day. 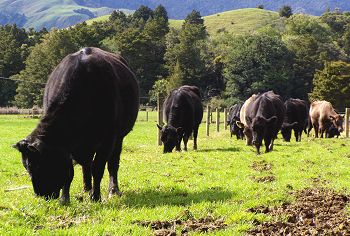 We brought the cows out of the Flat 1 paddock, where they've been for a couple of days and at the top of the lane, drafted three of them out into the Windmill Paddock.

When I was separating them I realised they're three of the five remaining daughters of Bertrand.  He really did leave some skinny cows!  The other two are full sisters from old white-faced 46 and both maintain better body condition than these other three.

In the picture, Isla's at the front, as usual. 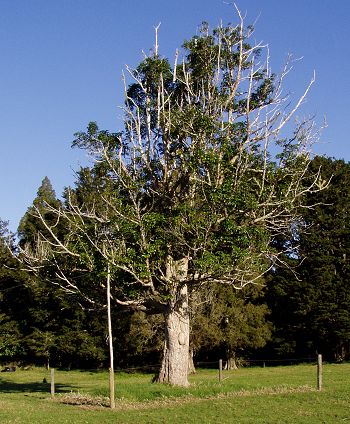 This is the Puriri tree which stands at the bottom end of the Flat 2 paddock.  It is one which has obviously suffered a great deal of stress over the years, not from 'possum damage, but from stock pressure around its roots and also because cattle like the Puriri bark and strip sections of it, which gradually kills off the top of the tree.

We fenced it off a few years ago (reference to the timing of which I cannot find anywhere) and I think it's really starting to look a lot better.  For a long time its foliage was extremely sparse, but it's now far thicker and healthy-looking.

I drafted 426, 479 and 486 out of the young/thin mob this evening and we took the remaining 12 up the road to the little Road Flat paddock.  426 is on my list as the first expected to calve and 479's udder has been larger than I expected for a while, so I thought it wise to keep her close.  486 is up on the list for early calving as well.  I left them in the paddock adjacent to the three older cows drafted last week, so they can get a little familiar with each other before I put them together.

Ingrid's calf can now stand for a few minutes to feed on her own - she can't get there on her own, but if I put her legs in the right places, she stays there.

She took me running again this evening, holding her left hip.  It might be great for her, but it's not so good for my back.  Later on I saw her get up to all four hooves on her own - and promptly fall down again. 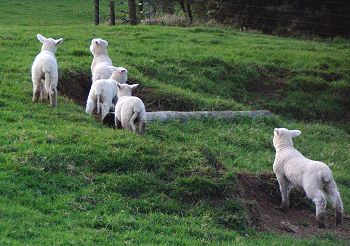 The lambs tear around the paddock in the dusk.  One tail has fallen off so far.  They're all looking very healthy and well-fed.  I am so pleased with the triplets: Dotty is a fabulous mother!

I had to go to a Vet club meeting today and by the end of it was starting to feel a bit anxious about getting home to the calf.  The sky had been very cloudy when we'd left, so I'd not worried about moving her to spend the day in the shade of the trees and when we arrived home she was in great distress.  She was very weak and when standing, hung her head with her tongue out, panting like a huge dog.  I really thought she might just die!

Eventually she came right, had a feed and was back to normal, even managing to get up to all four feet again in the evening, although she's still too unstable to stay upright. 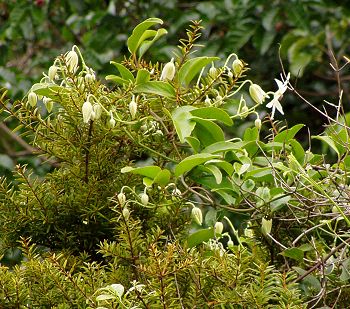 The Clematis vine up by the Middle Back gate, is just starting to flower.

I was walking up the Big Back paddock and over into the Middle Back to find all the cows. 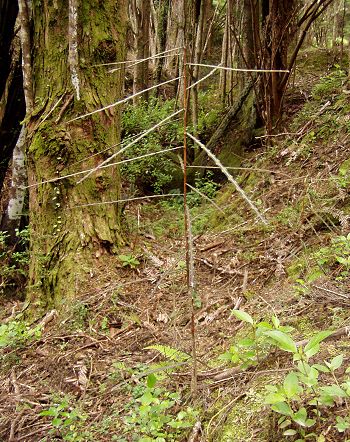 This Lancewood is a seedling I've been watching for about the last three years.  It's just up the hill from the gully trap where 356 was stuck and there were two of them here at one time.  I had thought about coming to dig them out and take them away to grow in safety elsewhere, but this one has survived on its own.

They are such an odd sort of tree, with their alternate leaf growth from such an improbable tip.

Since writing about Lancewoods on the Trees page some years ago, I've discovered more and more of them around the farm.  There are several young adolescent trees in the Big Back paddock and I have recently discovered a large one in the Bush Flat paddock - there were leaves all over the ground one day, which caused me to look up and discover the distinctive top of the tree and thence the trunk not far from where I stood.  There's a section of riverbank out in the Back Barn paddock where several tiny seedlings are growing.  They are far more common than I previously thought. 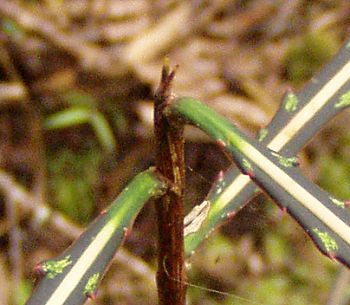 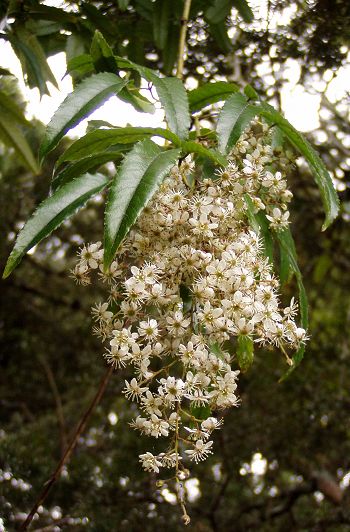 This is Bush Lawyer in flower.  It is related to Blackberry, apparently, and the fruits are edible - I can't say I've spotted the fruit yet, even though I do know where to look.

This plant hangs down over a section of the track on the way from the flats to the back of the farm. 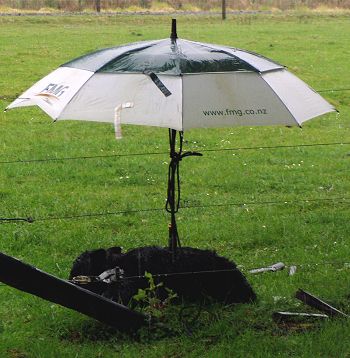 Little calf really doesn't like the rain and starts flopping around trying to get up so she can get away from it.  I turned off the electric fence and brought her over to my makeshift shelter this afternoon as an expected storm began.

Late in the evening, as the river began to rise quite quickly, I went out to the Pig paddock to move the sheep to the roundabout, so they would have high ground with no tricky corners in which to get trapped by the rising water.  It was a tricky bit of stock shifting in the dark with a bright light, especially when there was already water pooling in their gateway!  Fortunately they were all led to safety by Bendy and I made my way home before the water came up and over the bridge.

The calf can stand propped for several minutes on her own and even does little back-leg hops to change position, sometimes without falling over.  Mostly she ends up toppling over to her left. 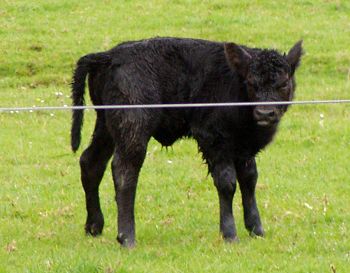 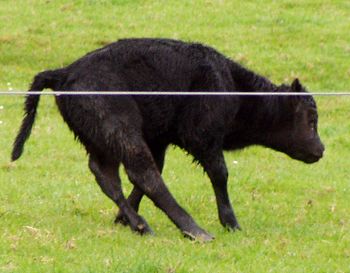 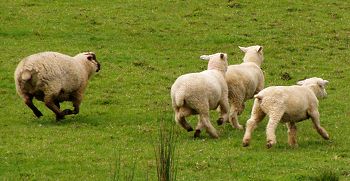 It's spring in the sheep paddock.  We wandered up the road this evening to shift some cattle and the sheep were tearing around the place - even Damian ran!

The five pregnant R2 heifers' grass is getting ahead of them a bit up on the hill and I don't want them on too much feed at this stage, so we moved the 12 young/thin cattle from the Road Flat paddock across to join them.

When we'd done that and were wandering back up the road again, our over-the-road-neighbour William appeared behind us with a tale of a lost animal.  He said one of his black heifers had gone missing and he'd looked everywhere and couldn't find her.  The evenings are getting quite extended now, so having a bit of spare time we went with him to help with the search.

The three of us went off in different directions - William into his Pine plantation where there's lots of long grass to tempt a heifer which likes to push through fences, Stephan up the hill and off to the other side of the property and I was wandering along the back boundary and spotted an interesting looking grey steer on the property next door.  Having been responsible for sending Stephan off on hunts for animals which weren't even in the paddocks I told him, I ought not to have laughed quite so long and loudly, but it did strike me as particularly funny that William's missing animal wasn't the black heifer he'd reported, but the grey steer which stands out in his mob so much more obviously!

So, the steer being quite safe where he was, we retired for some refreshments and I later phoned our common neighbour (since he and William have not yet met each other) and they will work out how to get the steer home again in the next few days.

I started receiving congratulatory emails this morning as people who subscribe to Growing Today magazine began receiving their latest issue in the mail, with my first column published.  That was both extremely pleasant and very frustrating, because I didn't get one!  I am assured it's on its way.