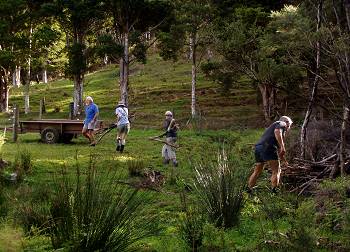 Our friend Anna, formerly of Wellington, now living locally, brought her friends Ann and Colin out for a visit today.  We all had lunch, then went out to collect some firewood - for us: they'd simply very kindly offered their help!

Anne and Colin have spent a year being the Resident Friends in the Auckland Friends Centre and are shortly to leave the country on their way home to Scotland. 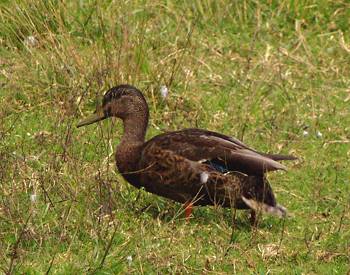 Stephan (or his regular poultry feeding) attracts one-legged ducks!  Every year he has one; maybe it's the same one?  The missing foot was presumably eaten by an eel.

Since I took this photograph, we've talked to our new dairy-farming neighbour, who apparently feeds just such a duck each morning! 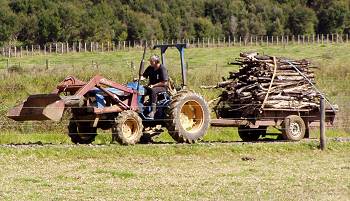 Stephan has started the annual firewood gathering task, having previously cut the Manuka/Kanuka trees down and stacked them to dry over the previous couple of years.  He needs to get it in before the rain starts and the tracks get too wet.  The hold-up this year has been his desire to get some paint on the ballet stage flooring which we store in our shed when it's not being used.  Now those boards have been painted and put away, he can start stacking firewood in the shed in front of them.  I do so appreciate having unending supplies of firewood to keep us warm during the winters! 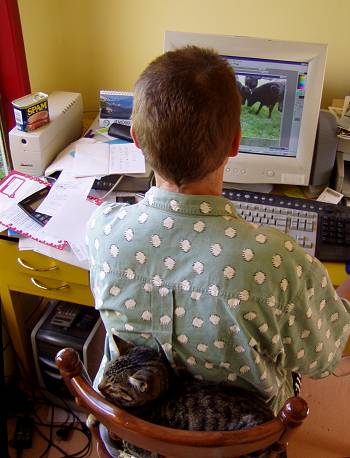 In my office during lunchtime, Stephan took a picture of my new lumbar roll in action - actually Finan sits on top of the roll which is attached to the back of my chair, giving me a very hot feeling across my back!  I'm sure I'll appreciate it during winter, but while the weather's still warm, it's not always very comfortable! 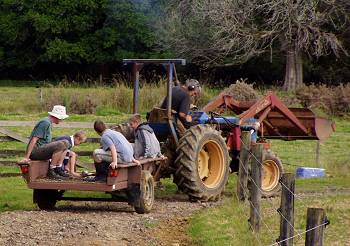 Later this afternoon Mike and Chantelle and their sons came out to collect some firewood.  I haven't seen Chantelle for a long time, so she and I did some catching up while the boys went off with Stephan to get the wood. 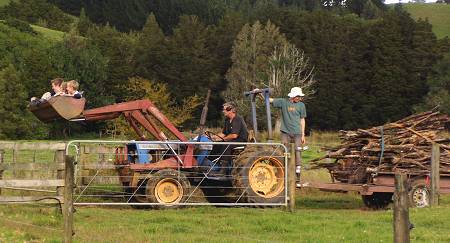 They came back in slightly different formation, since there was no longer any room on the trailer!  We have stacks of wood (mostly still upright and growing) and are quite happy for people to come out and cut it down and take it away.

A marvellous member of our Women in Ag group organised a visit to the Landcorp Rangiputa Station out on the Karikari Peninsula.  There were less than a dozen of us there, but it was a very interesting day, during which we were able to pick the brains of Lloyd Brennan, the farm manager.  We spent the morning hearing about the station and how it is run, then after lunch went for a bit of a tour to see various parts of the station, including this mob of weaned cows up on one of the high points overlooking Rangaunu Harbour, Doubtless Bay - practically the whole of the Far North! 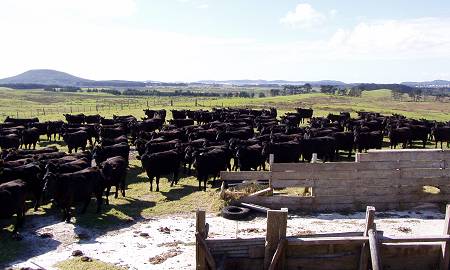 We looked at the cattle yards, the huge gorse-clearing operation, and on our way back to our starting point stopped to have a look at a large mob of ewes yarded for shearing tomorrow. 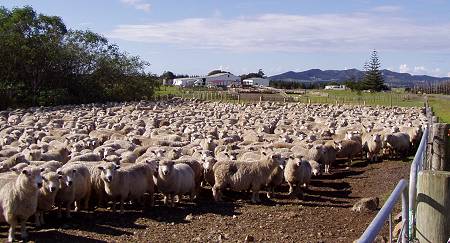 The ewes are in an autumn lambing programme, so many are getting quite close to lambing and some are reasonably old.  I would imagine there's quite some risk in holding such ewes overnight in yards before shearing, since restricting feed late in pregnancy can kick off sleepy sickness (pregnancy toxaemia) in ewes.  Ronnie (with whom I'd travelled most of the way) and I talked more about this on our way home, but hadn't thought to ask any more probing questions while we were there.

All day long I could see home, sort of.  The highest peak in the photo below is Puketutu and if you follow the ridge down to the left, the next 'bump' is the back of the pine tree plantation on the hills behind our farm. 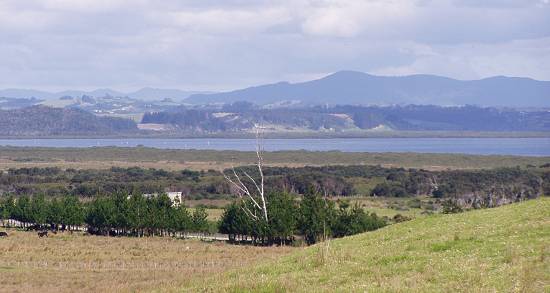 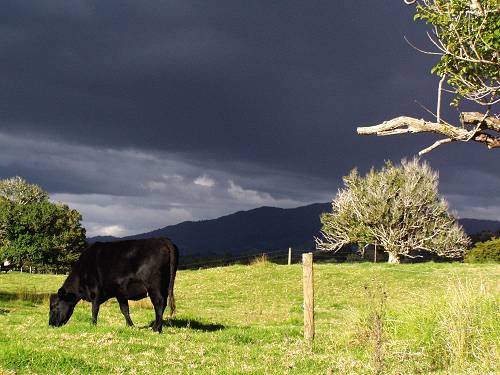 For several days this week we've had afternoon skies like this.  I remember the same thing happening in other late summers, when we've had long dry periods and were wishing for rain and these promising clouds would gather and deliver nothing.  This week I've been hoping that they will continue to hold their threat, since I really don't want the rain!  I bought 14 tonnes of RPR fertilizer at the end of March, which is now sitting in a bunker in Kaitaia waiting for our ground to dry enough for it to be spread.  I've been watching the weather forecasts each day, as the dry weather predictions have extended, then crept back towards us in time, hoping that I could arrange for the spreading to be done at just the right moment, when the ground is dry enough for the truck or tractor to get up the hills and not too long before the next rain will fall.

I spoke to Ryan, who drives the truck which usually spreads our fertilizer and he has said he'll come tomorrow.  About half an hour after this photo, there was a very light rain, and later on a bit more, but it was fortunately not much more moisture than we would get overnight with a heavy dew. 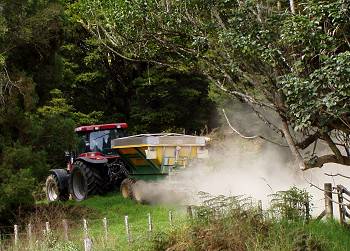 Don arrived late this morning in his tractor with five tonnes of my fert in the spreader behind him and I directed him out onto every hill he could get to.

When he'd finished, he headed back to town for another load and I joined him in the tractor for most of the rest of the job.  It's quite an alarming experience, travelling with someone who drives up, down and along slopes in such a perilous manner!

In discussion with Ryan this morning, I'd decided we'd just do the hills today and do the flats after the next rain, otherwise where would the cattle graze in the mean time? 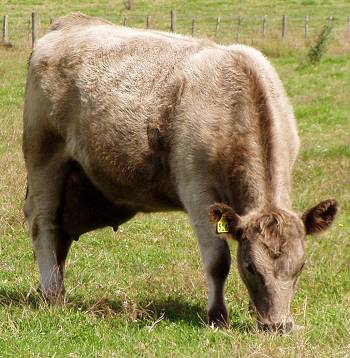 Grey heifer 516, still in good health, although I'm sure her udder is getting bigger again.

Today was Pregnancy Checking Day!  We brought the five different mobs in to the yards, in an order I had carefully worked out to enable us to get the job done as smoothly as possible.  There were the heifers, Ivy and her two companions, 19 weaned cows, the cows with bull calves and the 26 cows with heifer calves.  We drafted the heifer calves away from their mothers before the vet arrived, and had the cows all ready to go when Greg and Annie (large animal technician-in-training) arrived with the scanner and set the equipment up ready to go.  This is the first time I've seen scanning on a screen, the previous scanning being done by a vet with a head-set display which only she could see.  I saw teeth, skulls, little running feet and legs, beating hearts and somersaults by my future calf babies.  What a thrill!  Wonderful to look into such a deep and private space and see the life of those tiny growing beings which I won't get to see again until much later in the year.

Almost all the cows are pregnant, except for one of the heifers, 494, which I have seen in heat several times since mating anyway, and 359, the cow I put in with the bull a couple of times as an afterthought, but which was really a member of the cull mob.

I am delighted with the result!  It doesn't mean I won't cull any of the pregnant cows, but it does mean I can do it entirely on the basis of other aspects of production, rather than having the decision heavily influenced by the fact that they'll not calve this year.

It was a great relief to discover that Isla is pregnant, since she was so late and I missed her first two heats.  After all, how would I conduct the annual Isla's Calving Date Competition if she weren't?

By my calculations all but three of the calves will be born within six weeks of the start of calving and the last three should appear two, three and four weeks later.  An old article I've been reading by Russell Priest indicates that a short calving period would be 65 days and Isla is due to calve on day 66, with only Ivy another week beyond that time, so I'm actually not too far outside that period overall, and having most of them due to calve within 44 days, assuming all my calculations are reliable, is excellent.  I'm a little surprised, since the condition of some of the cows was not particularly good going into calving, after the sharp, early start to last winter.  Another concern early in the season was that my copper supplementation timing was a little different this year in the cows having only two shots during the winter while they were pregnant, with the third being administered just before mating - a little too close, I had thought, in some cases.  Copper is a vital trace element to cattle reproductive performance, but its administration is a systemically stressful treatment, so needs to be done not too close to the start of mating, for fear of disrupting the cows' return to oestrus after calving.  I'll examine the copper issue again this year by getting liver samples done at the works when I send the cull cows away.  Our copper results have climbed from the low/just-adequate range up into all being adequate, so I suspect there's still room to pump another shot into them during the winter/pre-mating period.  I shall consult further with the vet after this year's results come back.  I've been building a reasonably good set of records of our copper status here by having the cull cows tested each year and keeping track of what supplementation I've done.  It has been an interesting process.  The big hole in my information is still the lack of a test on the water supply to confirm that it is chock-full of iron, which is the chief suspect in the copper deficiency in the cattle.

I intend doing some analysis of some of my recent data (over the last few years) in regard to mating periods and which bulls sired which calves in which periods.  From the scanning results it appears that #26 is a very fertile animal!  Complicating that appearance though is the fact that the young bulls this year had the cows in the early part of the mating period when some of them may not yet have returned to oestrus after calving and #26 got them a little later, so the lesser number of pregnancies sired by the young bulls may not have anything to do with their abilities or any lack in that department.  However, it will be interesting information to gather from the oodles of raw data I have kept and have analysed in every other way I've thought of so far!