Ancient Ivy was obviously on heat today, being followed around by her grey-heifer paddock mate.  I was standing in the kitchen washing dishes and contemplating her when Stephan came in and said something like "you could put her in calf". 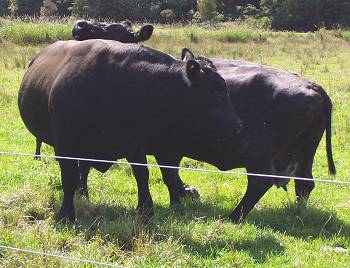 It's been a real struggle deciding to send Ivy on her way and that comment was enough to upset the decision I'd previously made.  We talked about Ivy not owing us anything at all financially, and that if she stays here longer, she'll probably need a hole dug for her at some point, which Stephan assures me he will undertake without complaint.  She does seem to be no more uncomfortable this year than last and she's in lovely condition at present.
We told Joy we had a small job to do and went and took bull #26 out of his paddock (again!) and along the lane to Ivy's gate, let him in, they circled each other a couple of times, before he mounted her once.  Ivy adopted the usual post-coital pose of internal discomfort and I figured once would do, so we took the bull out again and back to his paddock!  All done and dusted in five minutes.

This is not usual mating practice, of course, but because of my concern about the back injury a vet suggested Ivy may have suffered a couple of years ago and the suspected arthritis in her hips, which causes her some discomfort, I didn't want to risk leaving the bull with her for hours, constantly mounting and chasing her around, when he'd achieve no more than he already has.  I suppose if this doesn't work, I'll probably go through the whole agonising decision-making process again.

We dashed off to town just after lunch, to have a look in Finders Gallery because Joy had spotted an article of clothing in the window which she liked, last night when we emerged from our Restaurant dinner.  She was disappointed later on, to find that her purchase had actually been made in China!  I shall be a little more careful if I take guests there in future, to warn them that not all in the gallery which promotes itself as stocking the work of local artists, is indeed local at all! The Gallery is stocked with much to admire and it is good to have an outlet where people may access real art made locally, but I believe the attendant staff should make it very clear to their patrons when what they intend to purchase is from further afield. 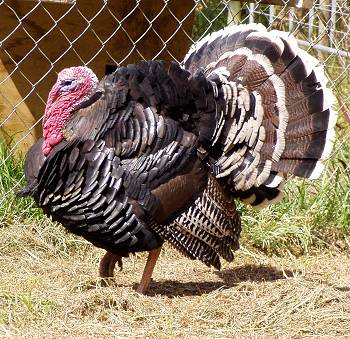 The one remaining adult male turkey on the farm...

His first sons are catching up quickly and will soon be as large as he.  It is likely we will have a number of turkey roast dinners over the next few months! 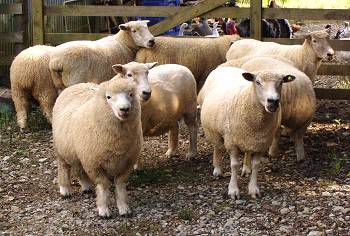 Stephan got the lambs in this afternoon, partly because they really need shearing and partly so Joy could watch the process, having missed out on the shearing at the Broadwood Show last weekend.

After his huge shearing job (five whole lambs must really have tired him out!), Stephan presented us with a dinner of roast lamb (a bit of that left over from Jude's wedding spit-roasted meat) and Crème Brûlée for dessert! 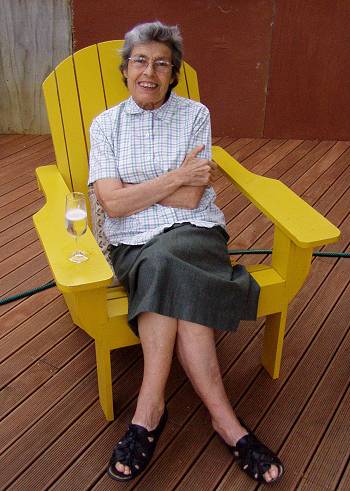 We decided on a reasonably quiet day today, having been out somewhere every day since Wednesday.

Stephan and Joy went hunting for some rocks to place around Stephan's new garden pond and I spent a lovely hour or two late this afternoon quietly limping around amongst the cows, taking pictures in preparation for a page to advertise this year's weaner calves for sale.  I haven't yet sorted out pictures of the pedigree calves and must do so!

It being Joy's last night with us, we opened a very nice bottle of wine and sat out on the deck together to enjoy it.

I took Joy down to Whangarei, back to Jill and Bruce, today.  She was to have gone on the bus, but since I needed to collect my repaired sewing machine (which blew up when I began 'sewing' perforations into the Tutus on Tour tickets - more on that later) and deliver a couple of pictures to a picture framer, it made more sense to take her down and spend a little more time together. 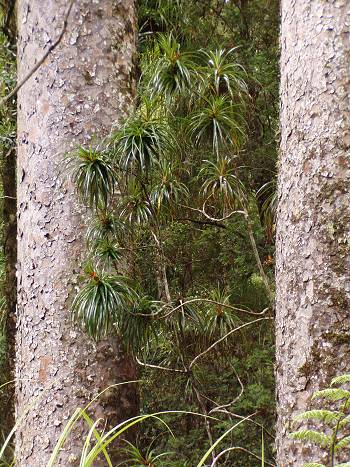 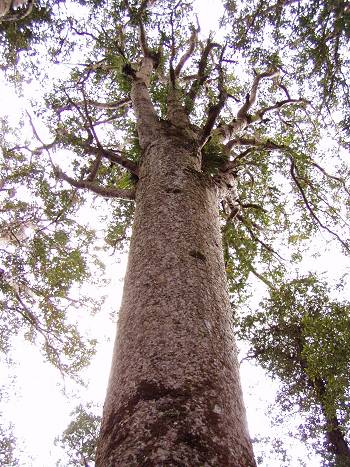 About 50 minutes drive south of home we turned off the main highway and travelled up to the public walkway through a little bit of the Puketi Kauri Forest.  When Joy's son, Chris, was here last year, we came through here too.
Apart from the Kauri, of course, the most striking plant in the forest is the spindly, extraordinary Neinei (which I believe is Dracophyllum latifolium), seen in the left picture, above. 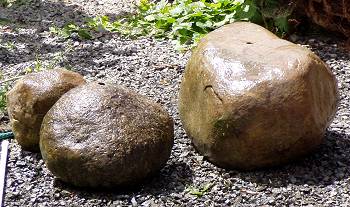 Stephan continued with his delightful madness today: he's been planning various "water features" for the garden for a very long time and one of them is very close to completion - at least in its first stage!  In the middle of the pond he's making, he intends having a pile of rocks out of which water will run and these are they, with their holes freshly drilled this afternoon.  The drilling process required my frequent dashing into the shed to put more and more blocks under the large rock while Stephan lifted it a little each time as he drilled further through it.  It is not a light rock!

I organised a play-reading evening tonight for members of Kaitaia Dramatic Society, to look at a play Stephan wants to consider directing.  We ended up with eight of the nine cast required, so one talented individual doubled up as a best man and a sister!  We'll advertise an auditions night next week and see if we can cast the play.

I spent an extremely frustrating day yesterday trying to find out how to obtain further healing assistance for my leg.  I'd been advised that I wouldn't need physiotherapy, but that a heel-raising insert for my shoes would be useful for a while until my leg comes right.  Do you think I could find who and where to get such assistance?  Eventually, in utter frustration, I phoned the doctor's surgery and made an appointment for this morning!

But before sorting that out, I'd arranged to go and be interviewed on Te Hiku TV to help advertise an auditions and Play reading evening next Tuesday for Kaitaia Dramatic Society.  I can't think what Stephan was doing at the time except I know he didn't come with me to town - probably playing in his pond.  The interview was fine and fun and I'll have to find a different shirt for next week's planned appearance to discuss the Ballet visit - one simply cannot appear twice in the same outfit!

To the doctor next, and from there I went directly to a Physiotherapist, who had a space to see me immediately (I believe this is quite extraordinary, these days) and did horribly painful things to my leg, taught me how and what to stretch on a frequent basis over the next few days, charged me $10 (the rest covered by the Accident Compensation Corporation who, in my opinion, are otherwise a bunch of obstructive ******s, obviously determined to drive injured people to distraction and extreme acts) and sent me on my way.  By this evening I'd started tentatively walking again!  So much for "just rest"!  A tip for the structurally injured: go directly to a physiotherapist, as they are now able to make their own ACC referrals!

Ivy's twins, now four years old and still often found in each other's company.  They didn't make a big show of reuniting when I put them back together recently, but nor did they have the usual pushing fight most of the cattle do on reintroduction.
Ingrid is fat because her calf died and she's not milking; Ida is far less well-conditioned, but raising a beautiful calf. 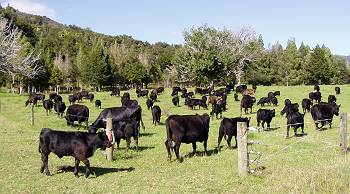 Another beautiful sunny day in Diggers Valley.  This is the 98-head mob of cows and calves, moving from the Mushroom 1 paddock to Mushroom 2.

We had a couple of visitors this afternoon: Chris, pig-hunter owner of the large and fearsome-looking pig-dog I found last October, arrived with several nice bottles of wine!  Cheers, Chris! 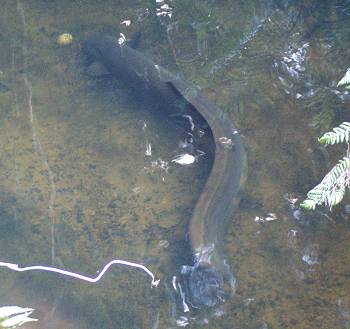 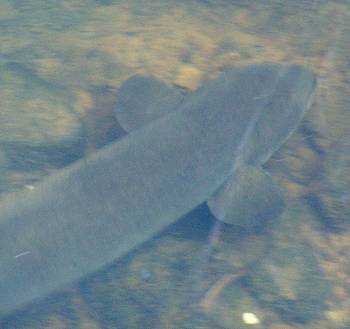 Stephan called me to come down to the bridge this evening to see this rather large visitor!  When Bloo was here, he said he'd seen a very big eel in the river, but we thought he was just being Australian and exaggerating.  Stephan took some dodgy eggs down and tossed them in for the eels and this one came upstream for a feed.  That's a duck egg (larger than a usual hen egg) in the left photo.  I would estimate the diameter of the eel to be about five inches!  I think I've only ever seen one other of this size.  Actually Karl (former eel-fodder person of a few summers ago) was here a couple of weeks ago ... maybe his scent was upon the water!