Nearly 20mm of rain overnight meant that I could move the cattle back to the fertilized paddocks today.  Mike and his boys came out to do some firewood cutting, then afterwards came back looking rather damp, since there'd been quite a heavy shower of rain while they were out!

Grey 516 is on heat again, yelling up a storm out in the Windmill Paddock.  She's really very noisy! 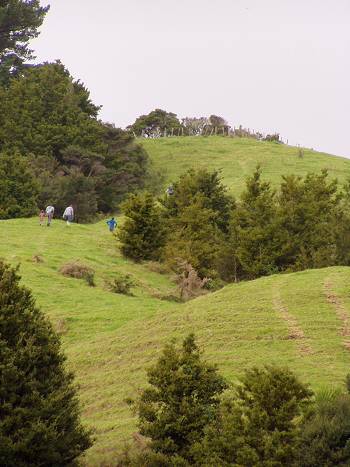 Anna, Sarah, Dylan, Ryan and Maureen came out for a visit, bringing pikelets (Anna called them drop scones) and cupcakes for morning tea.  The five of them then went for a walk up what Sarah and her siblings used to call Thistle hill (our big paddock over the road).  Sarah's mother is Stephan's elder sister Elizabeth and they once lived in the house in which Jane now resides, so the farm was part of the children's territory.

The wheel marks on the hill were caused by Don and the tractor spreading fertilizer the other day.

I spent quite some time this morning writing to people.  A certain local employer is to close and that will have a direct effect on our lives and a far wider one on the local community.  I shall write more about this in due course. 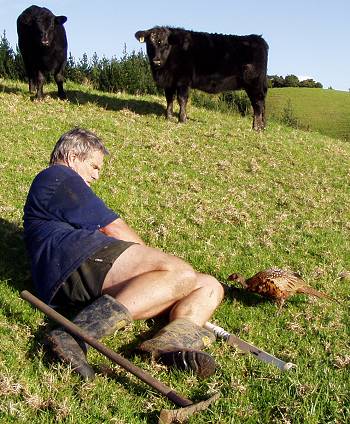 We went for a walk this afternoon, a daily task when the cows are over the road, and as we crossed the road, I noticed we were being followed by one of the young pheasants.  He followed us up the hill, through the trees and around the cows on the other hillside in the sunshine.

Last week he nearly died, when the cat (Finan) had earlier attacked him and hurt his eye and then later in the day chased him again so he flew into the side of the house.  I held him for several minutes as he writhed and looked like breathing his last.  Eventually he recovered enough to be left back in the cage in which they were raised and, several days later, he'd recovered enough again to be re-released.  I'm trying to discourage him from wandering around near the house, but he's obviously quite keen on human company.  Hopefully by now he's learnt something useful about the kitten and will have enough sense to get out of the way whenever Finan is nearby!

The two huge black creatures behind Stephan in the photo are a couple of the calves, the one on the left is Ida 56, who seems to get in the frame more often than not!  She's easy to identify at this stage because she still has no ear tag. 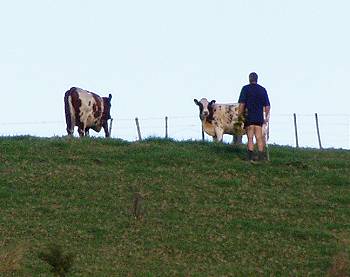 When I was over here yesterday, I discovered a trespasser in the form of a Ayrshire heifer which had found her way through the extremely shaky boundary fence at the top of the hill.  I tried to get her to go back the way she'd come, but she bounced off down the hill to play with my cows - so much for my closed herd policy!  I've spoken with Gavin about his cattle and because he runs an Ayrshire stud breeding operation, his cattle also need to be free of the sorts of diseases I am concerned about, so contact with them is probably rather less risky than with some cattle I might find on some of our boundaries.

Stephan walked up to the top of the hill this afternoon when he saw another one of the heifers had come through and had an argument I couldn't hear with them - it's fun having a zoom lens.

529 and last year's grey calf, 516, are cousins - their mothers are half-sisters through their grey mother.  529 and 516 are very much the same colour and fortunately this year's calf does not have some horrid thing going wrong in her udder, as 516 did! 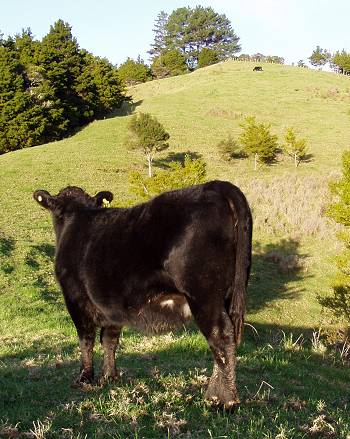 Most of the cows and calves were lying on the side of the hill, but a handful of calves and a couple of cows were right up the top of the next rise.

This is 539, the fattest and oldest of the calves, calling to her mother, 371, up the hill.  I'm always interested to see that they do know each other by sight, even over a long distance.  Mind you, why shouldn't they, since they know me and I know them in the same way.  Take all their ear-tags off, or blot out the numbers and I could tell you who every adult animal is. 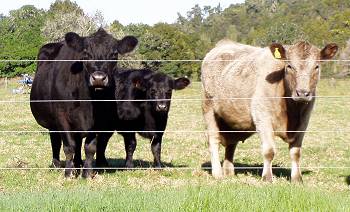 On Monday I phoned the butcher we use for our homekill beef, to book grey heifer 516 in for killing.  I expected him to tell me there was a wait of a few weeks before he could fit her in, but he said there was a space today!  Thinking I ought to take the first available opportunity, before the state of her udder removed any choice, I agreed to have her ready this morning.

Last night I brought Ivy and her calf and 516 out of their grassy paddock and down in to a small part of the house paddock, where the slaughterer could easily drive in and do his work this morning.

The picture is of the three of them, looking at me through my office window, before the guy arrived.

I find some of the homekill process really very stressful.  However most of my anxiety is around the actual killing - whether it will happen cleanly, humanely, quickly.  Blake, the slaughterer, shot her and she dropped conveniently in the shade of the big Puriri at the back of her house and while he stepped in to make the first blood-letting cut, I moved Ivy and her calf out beyond the electric tape which divided the paddock.  They were a little too curious for my liking and a bit disturbed by what was going on, so I moved them then back to their grassy paddock, where they calmly got on with their day's grazing.

Blake very carefully skinned and cut out the large mass which had caused the heifer's udder swelling and I put it on ice-packs in the chilly-bin in the shade, then later into a small fridge over at the shed.  Once Stephan had come home in the ute, we set off for town again to take the udder mass to the vet, for him to have a look at it.  The huge lump, weighing over 22kg, turned out to be some sort of mammary tumour.  Greg the vet took some samples after cutting it open and the laboratory agreed to have a look at them.  Greg's opinion is that she's perfectly safe to eat, so we shall do so, after her carcase has hung in the butcher's chiller for an appropriate time.