The week beginning the 3rd of March 2007.
Saturday the 3rd 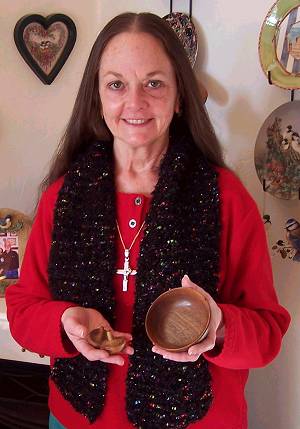 I received a couple of lovely messages overnight from Kathleen in New Mexico, one including a picture of her holding the little Northern Rata bowl and a couple of Rimu spinning tops I sent off in the post the other day.  Kathleen and Alex were joint winners of the Isla Calving Date Competition last year and it has taken me this long to get around to sending the prize to Kathleen!
Alex came with her parents, for a couple of days on the farm in January, as her prize option.

Kathleen has been writing to me since she found the website in 2003, so it's really nice to put a face to a name with which I have become quite familiar.

I brought the cows and calves in today and Stephan helped me by doing the yard work while I weighed them - I'd usually do it on my own, but my calf-muscle still isn't up to that much calf activity! 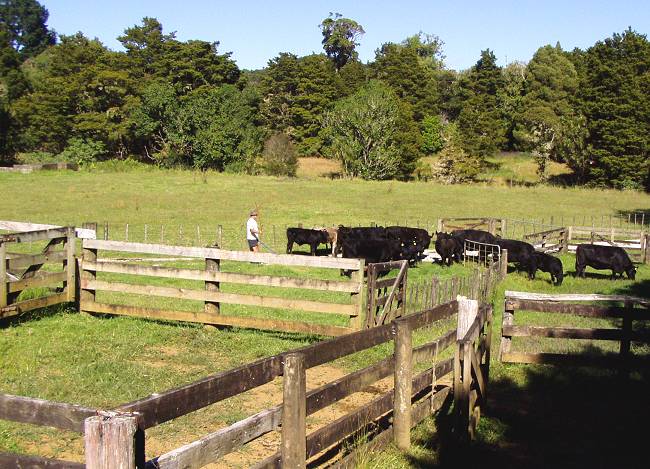 Just as we had finished the weighing, visitors arrived at the gate: a family who go around the neighbourhood on Saturdays talking to people about their religious beliefs, but who spent their twenty minutes with us talking cattle - we like them and they like us and we all know that a religious conversation prescribed by their particular belief-system will not contribute to the maintenance of our friendship!  Their eldest son seemed particularly interested in the animals, so he and I talked about breeding and he talked with his parents about the possibility of buying a couple of heifer calves, or pregnant cows, to begin his own herd. 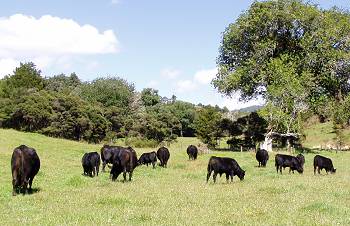 When they'd gone on their way, we got on with drafting the bull calves and their mothers from the rest of the mob, just to be on the safe side.  It is unlikely they'd be fertile by this young age, but they will be at some point I might not detect and I don't want pregnancies anywhere they're not planned.  The cows and bull calves then went out to the Mushroom paddock and the rest of the mob, 86 of them, went over the road and up the hill.

With a notebook full of lovely new weight data, I headed home and spent the rest of the day fiddling with spread-sheets!

Overall the calves are growing at an average 1.2kg/day from their first weighings (some at birth, some within the first couple or three weeks of life) and now.  I wonder if they'd have done significantly better had we not had the Coccidia scours earlier in the season?  At the time the vets warned of significant production loss over the longer term, but I'm not seeing any particular evidence of that.  There are a couple of calves whose growth-rates are a bit disappointing, but they're not those which I know were affected by the infection, some of which were treated and some weren't and got over it on their own.

I spent some of the day cleaning out troughs and moving a few of the animals.  I discovered some quite significant scarring on Demelza's teats, presumably from much over-zealous feeding by her bull calf.  The skin is thickened and many of the vertical sores are obviously quite tender.  The calf, now 213kg and 143 days old (just over 4½ months) has gained 1.238kg/day over his whole life, despite being the worst-affected blood-scours calf back in November, so Demelza must still be tolerating his feeding enthusiasm, despite any discomfort it causes her. 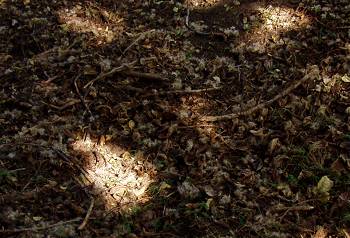 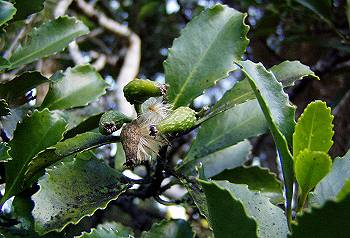 In an area of bush up the hill over the road, I stepped into a mass of cream-coloured fluff mixed in with the dead leaves on the ground.  It's not terribly easy to see in the left picture above, but it was lots and lots of seed from a tree above - although looking up, all I could see was the seeds caught in the Totara foliage, which was not its source.  I had to do some book and internet searching to discover which tree it might have been, which I then confirmed by a ride out to have a close look at the Pukatea tree in the Swamp/Frog paddock, where the branches are low enough for the seeds to be seen.

One of the information sources I found said that there would only be one seed per pod, which initially misled me, until I found a later source which confirmed there would be several in each.  The brown, woody seed pods had fallen with the seeds, most of which were still partially attached to their pods.  I've never seen Pukatea seed before.  I've planted some, so will wait and see if they grow.

On Tuesday evening we went into the Little Theatre for an advertised Auditions and Play Reading evening.  Response wasn't overwhelming, but we have mostly cast a one-act play and we read through two others I'd hired from the NZ Theatre Federation, which entertained us all.

On Wednesday evening, in between a number of very annoying (and possibly appliance-damaging) power surges and cuts I designed and constructed a tool-belt for Ella, our donor-daughter, who is about to turn five.  She rather likes doing things with her "Daddy" so I figured she might like to have a tool-belt, with some real tools, to wear and use with Stephan during his stay with her this weekend, and then afterwards with either of her mums. 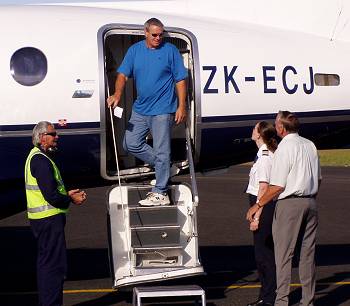 No, not actually a private jet, even though everyone appears to be pandering to Stephan's every wish.  Small towns are good fun sometimes, when you know people and they know you.

I took Stephan up to catch the morning plane to Auckland and then on to Whakatane to spend the weekend with Ella for her birthday party on Saturday.  The weather was beautiful and Stephan remembered to ask to sit at the back of the plane on the right side, so he could have a look at the farm on the way over. 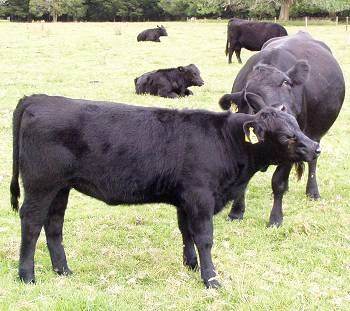 At home I went out and took more calf pictures, still trying to fill in the rest of the pages with all their details - one for the commercial heifers and one for the steers.  I have yet to do much about the stud calves this year. 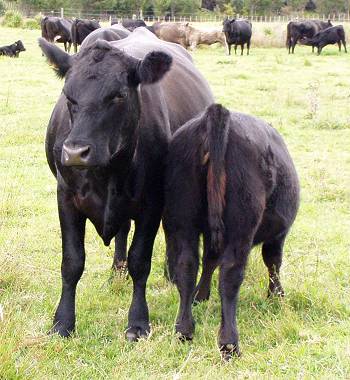 Ivy's daughter Imagen, two years old with her heifer calf.  The calf is just over 3½ months old and weighs 180kg already.  Every time I look at Imagen and this huge calf (40kg at birth) I recall that Imagen was a mere 25kg at her (and her twin's) own birth.

This year's stud heifers are an easy lot to keep, with only Flora, above, being a bit smaller and slower-growing than the others, which is not hugely surprising, bearing in mind her pedigree and the fact that her mother is only two. 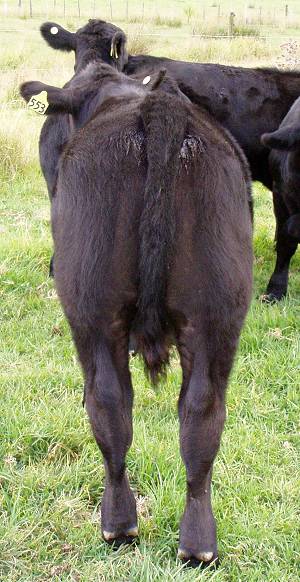 This is 553, large son of 446, one of the best-producing young cows, and bull #26.  The calf was probably well over 45kg at birth.  By the time he was three weeks old he weighed 81kg, so must have been putting on over 1.5kg/day on average since birth.  I wish I'd weighed him then!

I contemplated keeping 446's sister this year, but she's not quite the quality of 446, so perhaps another one, another year.  I'm glad I kept as many of Quadrille's daughters as I have, since they're proving excellent cows.

If you're very observant, you may have noticed the chin-resting behaviour of the heifer in front of Mr Fatbottom steer: one of the calves, #525, was on heat today.  At not quite five months old, she's pretty young - and I'm very glad the bulls are well clear of this paddock!  We've had the odd calf hit puberty this young, but fortunately not many of them.  If an adult bull had still been with this mob, I'd be removing the heifer for her own physical safety - and probably having the vet give her a pregnancy-preventing injection, just in case there'd been any activity I'd not seen! 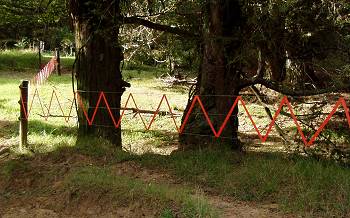 The Department of Conservation in Kaitaia gave us a roll of the plastic ribbon the pest trappers use to mark the locations of their traps in the bush, specifically so we could do this...

This is the fence where three Kukupa (native wood pigeons) have been killed by flying through the wires.

Regular readers may have noticed the long delay in posting anything new on this site.  All is well in Diggers Valley, we're just very busy!