The week beginning the 3rd of November 2007.
Saturday the 3rd 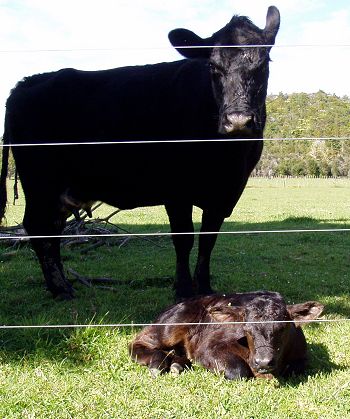 Onix was feeding her newborn calf this morning when I looked out the window, a dozy-looking brown bull.

Onix has been getting stroppier by the year and I suspect this will be her last in the herd.  Issa (my nephew, who owns her) has lost interest in her and her calves are not spectacular enough to keep any more of her daughters - although 456, who really only stayed by accident, has turned into a nice little cow.

There are now only three Starling chicks in the mail box.  I don't know what happens to cause single chicks to disappear; presumably they die, perhaps suffocated by the press of their siblings in the small nest as they all grow bigger and then I suppose the parents carry them out and dump them.  In other years, I've found dead chicks under the mailbox. 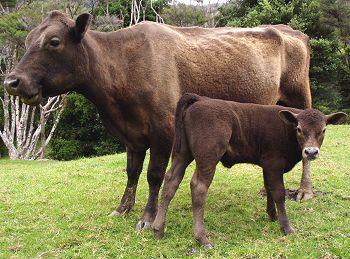 The Fuzzies.  357 is looking rather thin.  She was on the cull list last year and so wasn't drenched with the others, so she may have had to deal with a higher parasite load than she was able to fight well while on tight feed over the winter.  I meant to drench her sometime over the last few months, but the weather has been so unpredictable that it didn't happen. 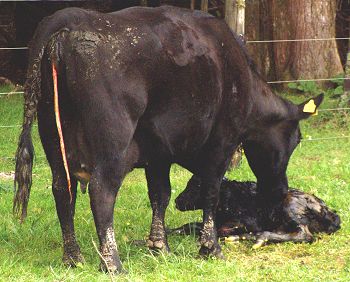 446 had the noticeably intent look of a cow getting ready for calving this morning, determinedly taking herself back into the Windmill paddock from the Mushroom, to which I'd moved most of the mob last night.
I left her to it, returning at 10am to find her well into her labour, with a bag of fluid already visible.  Just after half an hour later she had her new calf on the ground.  I wanted to keep a close eye on this cow because it was she, last year, who had a monster calf to the same bull, #26, and which I assisted her to deliver after she'd been in labour for some time.

446 was a very high-producing two-year old with her first calf and this is her third calf and first heifer.  I shall watch the calf with anticipation - she'll be high on my list of possible "keepers" this year.

This is the 40th calf (not counting Ingrid's twins) and those 40 calves have been born within 43 days, with which I am very pleased.  There is now a break of a couple of weeks before the three stragglers are expected to calve: Ivy, Isla and Imagen.

I did some more cow and calf mixing this evening, so there are now two big mobs: the 22 pairs out the back, and nearer the front, including the latest-born calf, 19 cows and 18 calves.  There was a little pushing and running around, but all the calves kept themselves out of the way.  Ingrid is the odd cow in the mob (odd in the sense that she's the one without a calf).

Flora 15, the cow which deserted her calf, was grazing quietly with a heifer calf happily feeding from her while her own calf wandered around calling and Irene 35 was frantically looking for her daughter!  Two-year-old Irene may not have very fast, or perhaps very much, milk at this stage, which might be the cause of her calf's latching on to any cooperative other teat.  I gently chased the little heifer away from the wrong udder and peace was restored.

A little later I noticed Irene 35 make an odd movement, for a reason I couldn't determine, after which her calf limped away with a very sore back leg!  She may have been a little close to 446 and moved to get out of the way and accidentally stepped on the calf.  These things can happen very quickly.  I watched the calf for a while and it gradually recovered and was able to bear weight on the leg again.

We had some rain at last, overnight.  Just under 5mm fell by 9am this morning, which nicely dampened the ground and later in the day more gradually fell, with some nicely intense falls in the late afternoon.  We complain about the wet all through the winter and then we switch to complaining about the dry: it is the farming way.  However, on this occasion, just before things got too worrying, the rain has fallen, in ideal amounts and intensities.  If the weather stays warm, the grass should really start to grow.

I checked on the cows and calves in the Mushroom paddock, then went on out to have a look at the yearling heifers, which I haven't seen since I put them in the Big Back paddock.  There were 20 conveniently presenting themselves at the bottom of the hill for counting; but of course there should have been 21.  I set off on a walk around the paddock, checking on the danger-spots and didn't see the missing animal anywhere.  Cattle can be quietly grazing in the trees and one can walk straight past them, so I decided I'd have another look later, hoping she might reappear by then.

Later of course it was raining, so I left going back out as late as I could, hoping the rain would ease a little, which it did.  I was checking the cows and calves in the Middle Back paddock when I spotted yearling 545's ear tag - and she still attached to it.  She's such a big heifer I hadn't instantly recognised her as an animal in the wrong mob.  I'd rather find her cheekily in the wrong mob than upside-down in a hole.  I have no idea how she got into that paddock.

The calves are such a delight to watch, as they leap around, playing with each other and around me as I walk through them.  I am relieved to see so many of them still putting their tails straight up in the air as they speed off around the paddock - it means that they're feeling good despite the scours.  Even the dirtiest bottoms are looking drier than they did and I've seen no evidence of blood this year.
I spoke with a farming friend on the telephone the other night and she said her vet had commented that calves are best off if they get Coccidia infection early in their lives rather than later, since they will come in contact with it at some time.  I haven't been able to find any information about the timing of infections and different effects on the animals, but I do wonder if when they're still very young they have more immune cover from the colostrum they first ingested at birth.  I wonder how much difference two or three weeks can make?  Last year's calves were four to six weeks old when they first showed signs of scours, but these ones were all less than four weeks old when the scours first appeared.  I will need to check back through my notes to see at what stage it appeared in other years, for I have usually noted it only as a passing thing in some of the calves. 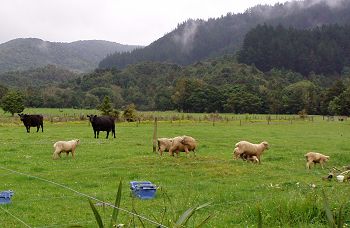 The lambs came trotting down the lane this afternoon as if they had every right to be there.  By the time I got out of the house and around to have a word with them, they'd ducked under the House Paddock fence.  They'd come out through the turned-off bottom wires at the top of Flat 1 and back to where they'd begun their lives.  After galloping around the paddock for a while, they found their way back to where they were supposed to be.

The cows are Ivy, on the left, and Isla. 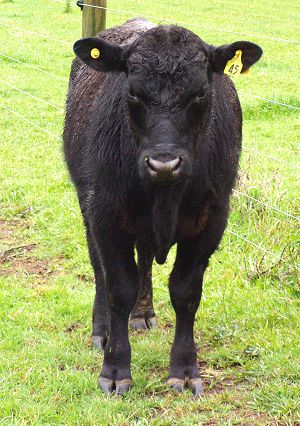 This is Demelza's yearling son.  He's just under 350kg at this stage and will go out with the little heifers at the beginning of the mating period.  He has a nicely quiet temperament and still much of the presence he showed as a calf. 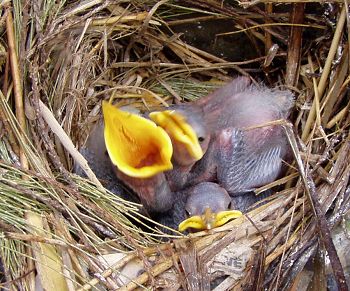 The Starlings in the mailbox now have their eyes open and are starting to grow feathers.  They look more like proper birds every day. 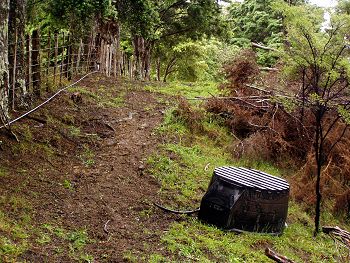 Water provision to the troughs up this hill is obviously unreliable and perhaps prompted this bovine protest.  There's a lot of water in this paddock in some reasonably accessible areas, particularly since there's been quite a bit of rain over the last few days, so working out what's gone wrong here again will have to wait until it becomes a little more urgent. 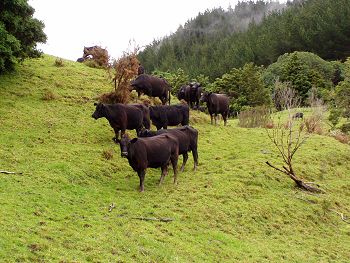 My most pressing job in this paddock was to find Delilah 36.  Her calf was calling for her as all the other cattle gathered near the gate for a move into the next paddock and there was no answer from her at all.  I walked around the whole paddock twice with decreasing alarm, as I checked all the dangerous sticky spots and found no stuck young cow.

Eventually I headed off into the Big Back paddock to see if I could find the young heifers and see if she'd joined them - since heifer 545 was in with the cows, it seemed likely that Delilah could have gone in the other direction.  Delilah was in the paddock into which I was about to move the rest of the mob, silently grazing amongst the trees.

I heard the first big cicada of the season this afternoon outside the house.  It doesn't always feel much like it, but the weather must be warming up. 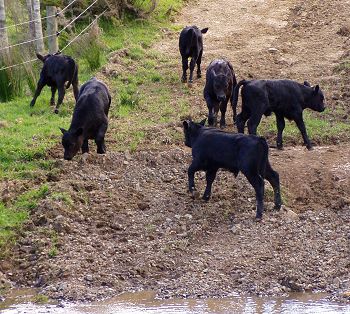 The calves are either more intelligent these days, or I've learnt better how to move them.  These little bulls (mostly) were working out how to get from where they'd been to where their mothers had gone, either under the lane fence wires or down and around via the stream.

It's quite fun having a sizeable mob of calves which were all born within such a tight timeframe.  Being all much the same colour, they're like little duplicates of each other, tearing around the paddocks.

I went for a tramp up into the hills this afternoon (Stephan being temporarily unavailable) to fix the water supply system, which had stopped at some time yesterday morning, after all the rain caused the river to rise.  It's some time since I've been up in the bush on my own and I did get a bit "lost" a couple of times.  There isn't really a track, so it's easy to get disoriented and head off in the wrong direction.  I discovered a Fuchsia tree!  I've never seen one before.  I'll have to go up there again with the camera and take some pictures.

I amused myself for a while today getting pictures of calf faces.  I thought it might be interesting to see how they vary, but have yet to arrange those photos.

Flora 15's bull calf is very tame and follows me for a head-scratch when he sees me - he's the calf she deserted at birth, so I was with him for all of his feedtimes in his first three days.