The week beginning the 6th of January 2007.
Saturday the 6th 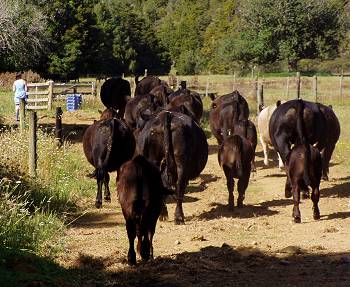 Irene 698 and Queenly 23 were both on heat last night, so I took them in to the yards early this morning and inseminated them both.  Afterwards Alex led them back to their paddock.

After morning tea (including some of Stephan's wonderful nutty chocolate fudge) Pip, Tony and Alex set off for home.

I sped around like a motel worker and changed sheets on the beds, washed towels and so on and prepared for the next lot of visitors, expected this evening.

My gorgeous friend, Mags, her partner Ingrid and their two American friends, Bruce and Johnny, arrived and while Stephan set up the barbecue for dinner, I took them away to the yards to demonstrate cow insemination on Fleur 28!  Some people apparently had to look away while I did it!  Then we went back to the house for an evening of lots of wine, music and conversation.

I've inseminated five cows in two days!  It's all happening in a rush, which is a great relief after so long with no activity at all!

Our guests headed north for the day, driving up to Cape Reinga, so we had a quiet day of rest on our own. 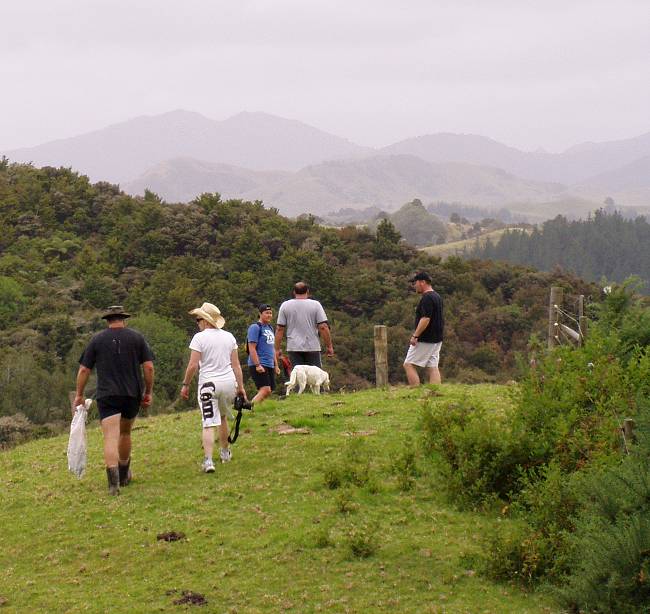 We went out for a walk this morning, walking up through the Big Back paddock, over the hill behind the Pines and out onto the green we can see from the flats.

Johnny and Bruce were great fun - Bruce was the nominated Ragwort puller, hence his lovely spray of yellow flowers.

We are fortunate in having lovely friends who often bring their other lovely friends with them to visit us.  We keep meeting really delightful people with whom we'd otherwise have no contact. 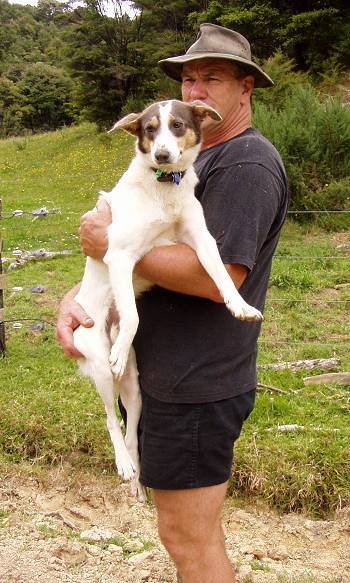 We had to walk through the cattle on the way back and the cows were getting a bit nervous about the dog.  Normally I'd just get Jenny to stay close, or make her go around the outside of the cattle, but since I wanted my guests to enjoy the cows, I figured it was easiest to remove Jenny from their awareness, so Stephan carried her!

How embarrassing for a working dog!

I can't work out whether her expression is one of pathetic gratefulness for the cuddle, or utter shame at being picked up.  I think it's the former, based on her soppy behaviour at other times.

If the dog isn't on her own feet on the ground - travelling on the tractor or the back of the ute, or being carried - the cows don't take any notice of her and she can pass very close, even to a new-born calf.  If she's walking or running on the ground, the cows will have their heads up and be watching her from as far as two paddocks away! 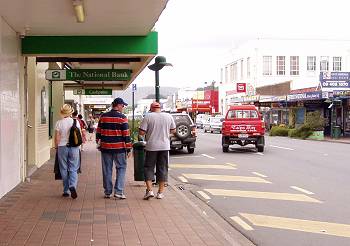 After our walk, our guests insisted on taking us to town for lunch.  This is a picture of Kaitaia, looking south.

We don't mean to sound ungrateful, and did enjoy our trip out for a meal, but we are strongly disinclined to go out for lunch, since we live in one of the nicest places in the world and have a very able chef on the premises!  When I think back to my life in the city, I understand the urge to go out, since there are so many places to go and one's home is only a small part of the world.  But out here we may walk any number of different paths every day, without the need to leave home at all.  Perhaps, to some, we're boring, and perhaps we're extremely fortunate to be so content to be exactly where we are! 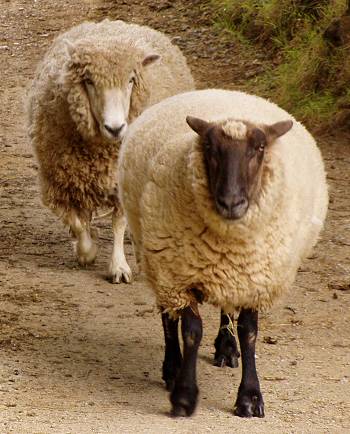 Damian's been bothered by flies and was actually fly-struck last week, at which point I had to apply powder to his under-side to kill a number of resident maggots, so Stephan brought him and Bendy in this evening and shore them.

Damian is a chore to shear with his horrible skin condition which is causing more and more cysts to grow in or under his skin.  We've never worried about them because they don't cause him any illness, but they are cosmetically and practically rather unpleasant!  He's now 10½ years old which is, I think, getting on a bit for a sheep.  He seems in reasonably good health, neither over- nor under-weight and temperamentally quite manageable (some wethers can be dangerously violent).

Bendy is a whole different story, being a sometimes ferocious problem animal. 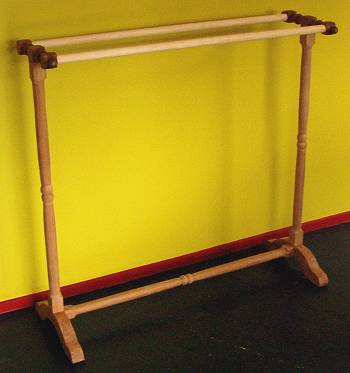 When I knew we were to have a stream of guests, I suggested to Stephan that he make a free-standing towel-rail for the guest bedroom.  Now that the guests have all gone, he has finally had the time to finish it. 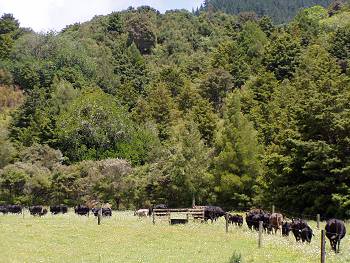 These are the cows with bull #26, moving from one paddock to another, with the Small Hill paddock in the background.  There are no yellow ragwort flowers to be seen, so Pip and Tony must have done a good job!  (As if you could actually see them in all that bush and scrub!)

Later in the afternoon I went back out to see if the bull was doing anything interesting and my eye was caught by the colour of this moss in the sunshine.  I don't know much at all about mosses, but I was intrigued by the colours and the form of the plant/s. 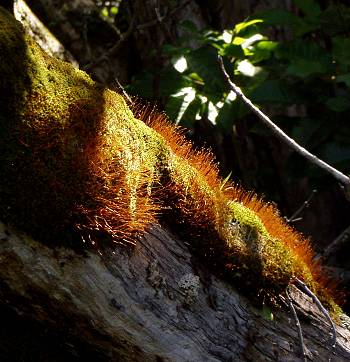 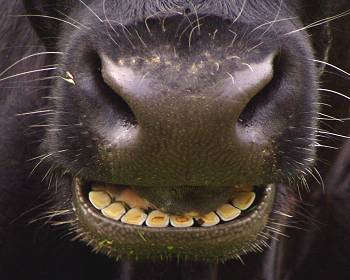 These are the teeth of a mature cow.  #360 is 6½ years old, so the last of her teeth will have erupted sometime in the last couple of years.  When they first come up, they're often a bit crooked, but over time straighten out so they provide an efficient feed-gathering system.  Cattle only have bottom teeth in the front of their mouths, with a hard gum plate at the top, against which these teeth close.  There are sharp molars top and bottom at the back, for chewing their feed the first time, and again as it is regurgitated for further processing, from the rumen (known as chewing their cud).

The cows don't conveniently open their mouths and pose for these shots - I have to take a lot of pictures to get them in just the right phase of chew! 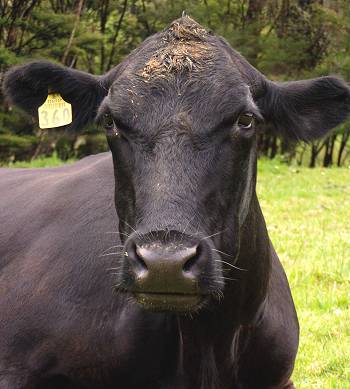 Since you've had a good look at her mouth, this is 360's face - I thought a formal introduction might be in order.  She's the daughter of one of the first eight heifers I bought, a part-Angus (I was led to believe purebred by the unscrupulous stock agent!) cow which ended up with dreadfully long feet, but with Bertrand 01 created this cow.  She is generally rather scrawny-looking, as many of Bertrand's daughters were, but has produced some excellent calves, one of which was last year's best first-calving heifer, (#446) who also has this year's monster calf. 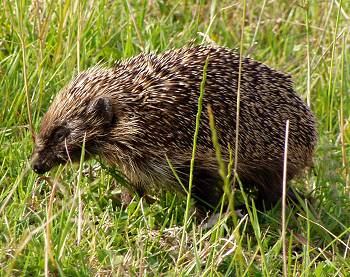 I'm not sure what this hedgehog was doing out and about so early in the evening, before the sun had set, but it seemed in good health. 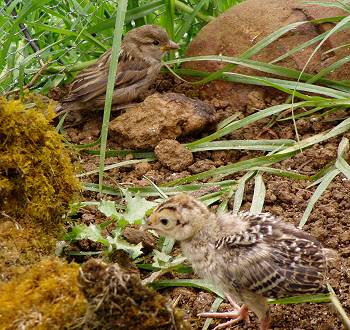 Yesterday I watched, with great disappointment, as Spice threw a little bird she'd caught around in the wet grass.  It looked like it was already dead, so I decided to leave her to it, but a little later, when I saw her still playing with it, I detected the flutter of a wing, so went out to rescue it, if only to put it out of its ongoing misery!

It was surprisingly alert as I held it, so I wrapped it up and put it in a small box in the hot-water cupboard.  This morning it was dry and active, so I took it outside, but discovered that it couldn't fly because it was only a young chick, so I put it in with the pheasants.  The sparrow is at the top of the picture, with a pheasant in the foreground.

The sparrow chirruped its way around the enclosure for the day and went to bed with the pheasants in their box this evening.