The week beginning the 10th of September 2011.
Saturday the 10th 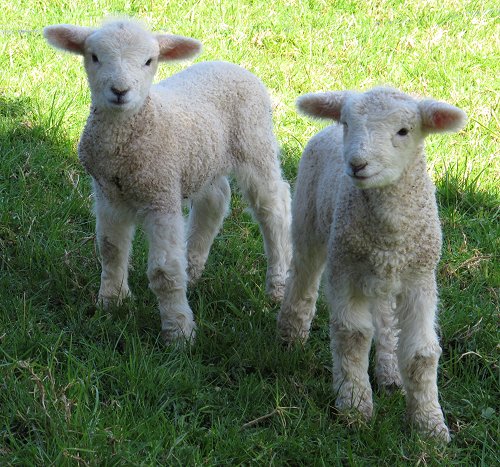 An astonishing thing happened a couple of days ago: the second lamb born, which I had decided was a ram, has turned into a ewe.  Small farm animals do this, I've noticed; they're born one sex, then miraculously turn into the other.  I had been observing the lamb squatting quite often and had wondered why a ram lamb would be doing that, thinking perhaps he was uncomfortable in some way.  It took a couple of days for the obvious to percolate past the information already settled in my brain, so that it eventually occurred to me that my initial assessment was wrong and the lamb is a ewe. 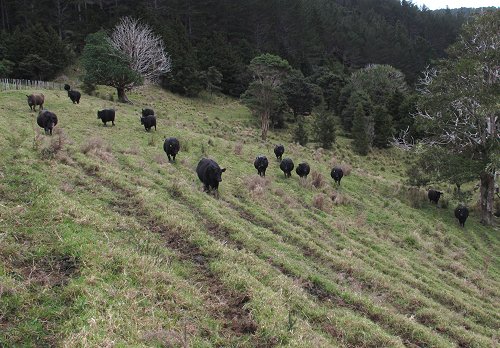 I called the cows up out of the Middle Back this afternoon, looked at Abigail, but completely forgot to wish her a Happy Birthday!  She's ten years old today. 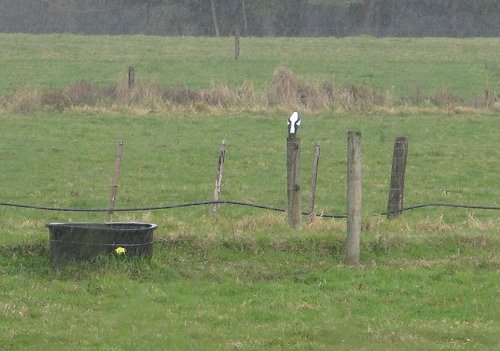 Six of these horrible birds perched on the fenceposts along the lane outside my window today, but they all flew back into the trees before we got the rifle out of its locked cupboard.  Stephan took a couple of shots at this one which stayed in the open, but missed.  They're Magpies and we loathe them and there are more of them every year. 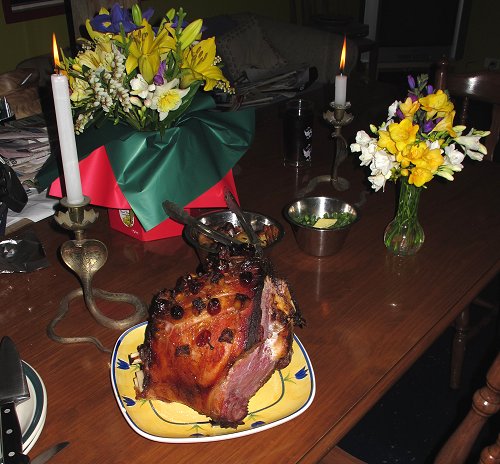 During the day an unfamiliar car arrived in our driveway and a woman got out carrying an arrangement of flowers!  It is my birthday and I'm a year younger than I thought I was when I woke up this morning, which is the sort of surprise it's nice to have on such a day.  Having spent the last couple of months thinking, "I'm nearly 46", at midnight, when I was still up doing some overdue writing work, I thought, right, 47 now.  This morning, as the news was reporting various things about tenth anniversaries of other peoples' disasters, I was trying to think how old I was then and it occurred to me I wasn't 37 then, so I can't be 47 now.
My lambs change sex, I can't remember how old I am ... where to from here?

But back to the flowers: this is, as far as I can remember, the first time in my life that my mother has sent me flowers.  How nice of her to think to do it now.  Stephan cooked one of our delicious hams for our dinner, which we ate together in the early evening - not all of it, but we made a good start. 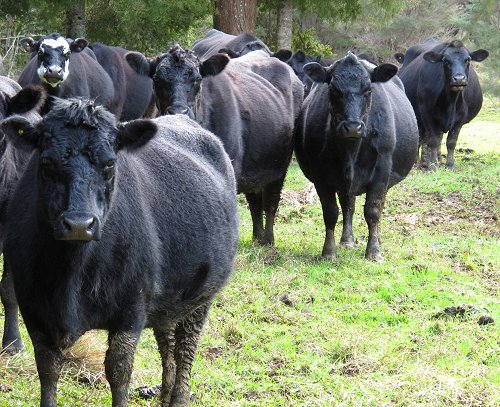 Imagen has been looking surprisingly thin.  Bearing in mind she was on far better feed than the rest of the herd while she was still being milked, I thought she'd hold her condition better than the others.  I'm beginning to wonder if she's carrying more than one calf?

Imagen is in the middle, with her ribs showing.  Most of the others have enough fat under their skin to round over the bones. 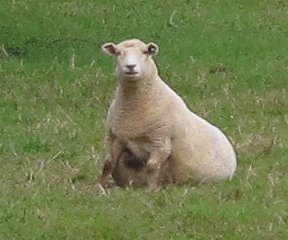 Both Dotty and her daughter, the tagged ewe, have been sitting up like this for short periods lately.  There must be a great deal of pressure internally, which no doubt makes it quite hard for them to breathe when lying down.

I brought the 26 cows in from the Small Hill paddock and gently put them through the yards to receive another copper injection.  I usually push them all into the top two yards together when they are this sized group, but now that many of them are in quite late pregnancy, I took them in two lots, so there'd be more room for them and less chance of anyone getting shoved and not able to get out of somebody else's way.

When I had finished, I drafted six out of the mob: 517, 479, 571, and Athena 72 because they're the first few I expect to calve according to my list, Imagen because she's thin and needs extra feeding, and 545, another surprisingly thin cow with more udder development than I expect to see at 258 days gestation!

The other 20 went over the road and the six into Flat 1, where I'll calculate how much I need to break-feed them over the next couple of weeks. 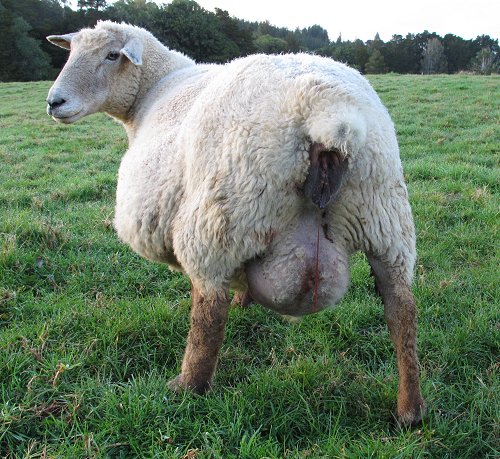 After I was surprised by the first lambing, I carefully checked my calculations for the other ewes and expecting that Dotty would lamb today, checked her as soon as I got up this morning.  She wasn't behaving entirely normally and her huge belly had changed shape slightly, appearing to have dropped.

If I hadn't looked while that bloody mucous was still there, it would have been hard to tell she'd begun labour!

I washed my hands and arms, grabbed the lube and we went out to wrestle her to the ground and I investigated within.  There was a lot of funny brick-coloured blood and a couple of feet, which turned out to be back feet and after a very strenuous pull, I extracted a lamb which soon gasped, and gradually came to life.  I could feel the feet of the next one, but every time I grabbed a foot, the lamb violently pulled it back out of my grasp, so I left Dotty to get on with it on her own.

A couple of hours later I tried again, but the lamb still wasn't ready to come out.

Eventually Dotty was doing some serious pushing again and when I went to her, the lamb's nose was just visible, along with the tips of its toes: the usual problem had occurred again, with the elbows stuck, causing the head to come forward, bunching the shoulders up into a large mass which couldn't move.  I pulled one leg and then the other forward, and the lamb was out. 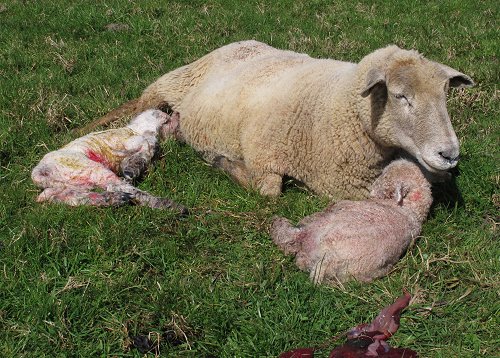 Dotty seemed really tired and not at all keen to stand.

I fetched her a container of feed nuts with some Magnesium Oxide sprinkled over them, which she eagerly ate.  The second lamb, a ram (yes, I'm really sure about that) was snuffling around for something to suck, so I put him next to Dotty's teat and he had a good feed before he'd even started to try and get to his feet.

Interestingly Dotty had expelled the afterbirth from the first lamb before the second one was born.  I haven't seen that happen before, assuming it was always the case that the lambs were all born before the placenta(s) came away and out of the ewe.