It was shaping up to be an extremely hot day today and the sheep had already figured out what to do about it. 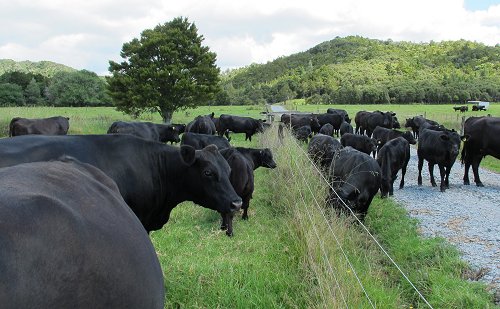 The cattle were in Flat 1, gathered up at the hot end rather than under the trees.  Because the trees which provide this paddock with shade are along the fence at the eastern end, as the day progresses there is less and less shade available to the cattle.  There was still grass to eat where they were, but in weather like this, shade is far more important than food, so I moved them.

This gate arrangement occurs in several places: the gate is naturally in the corner of the paddock, but often it's at the wrong end of the fence in relation to the direction the cattle are required to go when they leave the paddock.  Here I had to push them all up into the far corner, and they had to turn sharply right to come back along the lane to the Windmill Paddock.  They learn about these movements over time, but it's tricky with young calves, who want to follow their mothers, even when there's a fence in the way.  Unless you get all the calves joining the flow of animals out of the gateway, they'll double back along the fenceline instead. 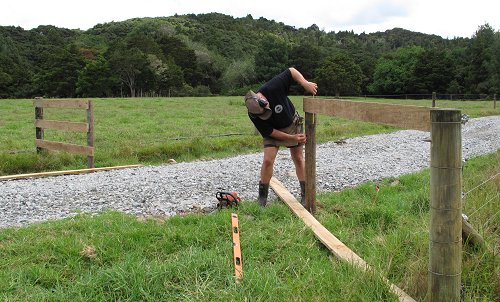 There are various points in the lanes where it would be useful to be able to stop cattle, so that they turn, or enter a particular gateway instead of carrying on down the lane.  This is where the cattle had to turn out of the gateway yesterday to the right, so we had to ensure the new rails won't impede that flow too much.  A spring gate across here will make the cattle, when they come down from the back of the farm, turn right into the lane to Flats 2, 3, 4 and 5 paddocks, instead of heading on down toward the house and yards. 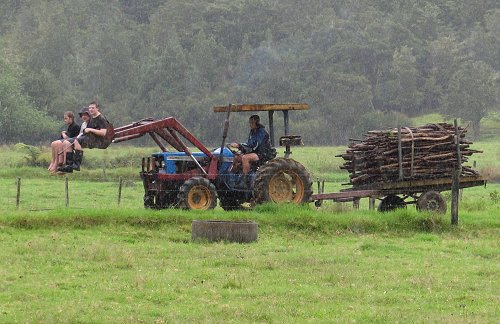 Mike and the boys came out to collect the firewood they've been cutting during the last year.  At about the time they left Kaitaia, it started raining very heavily here.  As we'd had a couple of similar quick showers during the early part of the afternoon, we all thought it wouldn't last long.

The rain lasted almost exactly as long as it took them to collect the firewood, and stopped just after they arrived back at the house.

This afternoon I drafted bull 87 out of the cow mob, along with Demelza for company, then sent the cows and calves out to the Bush Flat paddock.  That has given the herd a 48-day mating period, slightly longer than I'd intended, but with the bull problems along the way, the extension was necessary. 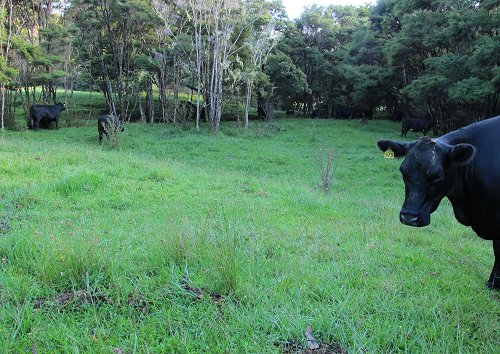 Walking around amongst the cows and calves in the Bush Flat paddock this morning, I was surprised to see some of the changes the flooding had caused.  There must have been a huge amount of water through here, judging by the "high tide" line of flood debris in the foreground of this picture.

The stream runs around the edge of the green area, where the trees grow on the riverbank.  Where it changes direction suddenly, it has broken through a section of the bank and some of the water is now flowing down across a previously dry area, instead of around a long loop.  Presumably the water will gradually cut a new and permanent path across the few metres to the other part of the stream. 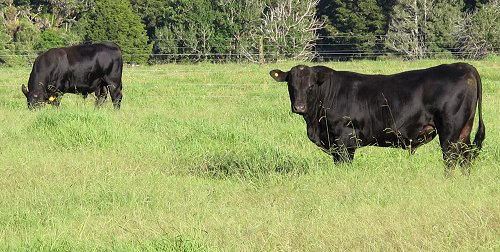 The two bulls, enjoying a paddock of large quantities of grass all on their own.  That's 89 looking at the camera: as you can see, he appears fully recovered from his earlier injury and subsequent illness. 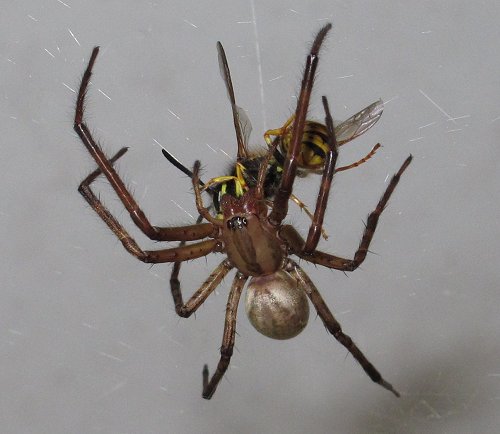 In our bathroom, spanning the gap between two walls above our toilet, is a beautiful web built by this spider.  It is a sheet-web spider and the web is a horizontal construction, with web strands also attached to the ceiling.

When Stella and her friends were here I found a discarded skin from the spider, and it's still growing!  I'm helping it, by throwing insects I've whacked with the fly-swat up into its web.

When this wasp put up a fight I wondered if I'd made a mistake, but the spider had things well under control. 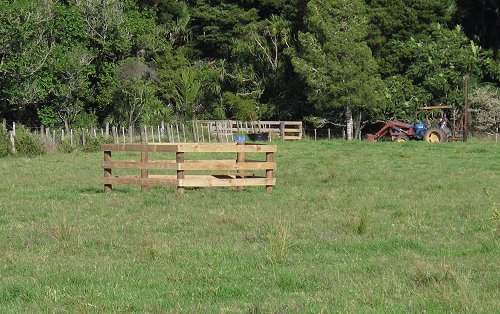 It has taken us a while, but over the last couple of days Stephan and I planned the shape and size of the railed area to surround Isla's grave, and he has completed it this afternoon.  I'll now find a Puriri to plant over Isla.  Ivy's bones, which have been sitting in containers after I gathered them from where she died at the bottom of the hill in the PW, will go in there too. 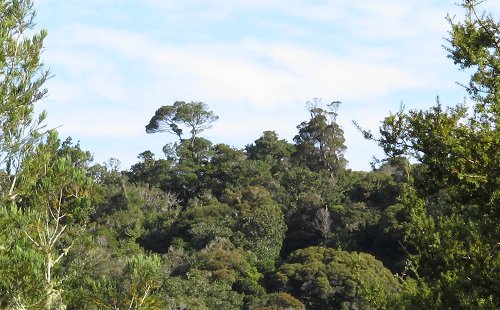 The two trees on the skyline are Northern Rata and I took the picture because I hadn't noticed the shape of the one on the left before.  Perhaps another tree has fallen, leaving that one visible.

For some years I've been meaning to learn how to code my webpages using cascading style sheets.  This page is differently coded than all my previous pages.  You will notice some obvious, small changes, but I hope it will otherwise look very much the same as the last one you saw.

For those who aren't aware, what you see on your screen when you come to this site is not what I see as I write it.  I write my text amongst a lot of code which determines how the page appears on your internet browser programme.  How much code is required to do the job is one of the things I've changed.

When I learnt to write the code, it was still acceptable practice to place all pictures and text in tables to control their location on a page, but that is no longer the best way to do it.  I am not very advanced in skill yet, but have discovered enough so far to do the things I require. 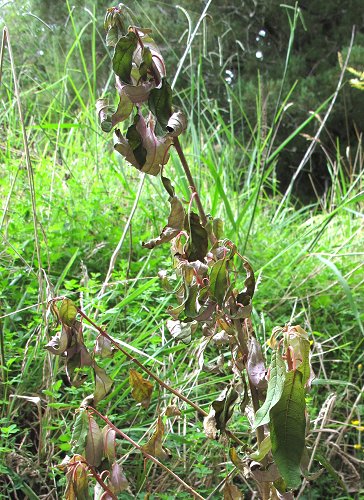 I have concluded that Tree Fuchsia plants do not tolerate wet roots.  This is one I found low on the riverbank in the Bush Flat Reserve and it is now surrounded by a lot of silt from a slip in a corner just upstream.  It will have suffered as much waterlogging as the little tree near our home, which has died. 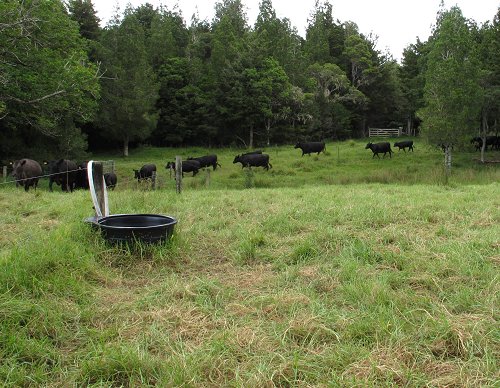 The cows and calves have been in the Big Back Paddock.  This is what out-of-control Kikuyu looks like after one grazing.  I'll have to wait until it greens and stands up a bit again, then put the cows back through.  We don't have enough cattle for this summer's conditions.

I rode up the hill on my bike and completed a "roll check" of all the cattle, then called them down to the gate and out of the paddock.  The four calves which had their first vaccination when the others had their booster, are now due for their booster shot.  We plan to do that in the morning, then keep the cattle near the yards for some visitors to see.