Nephew Simon and Anna visited today, primarily to collect some firewood; but they were keen to get out and do some farm work too, so Stephan accepted their help in constructing the fence around the new tank. 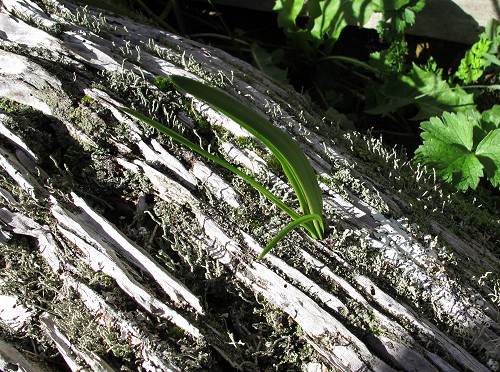 In November last year, on my hunt for orchid plants around the farm, I discovered this piece of Puriri in the Big Back Paddock.  In it was what remained of an orchid plant which had been eaten by something.  When Stephan was out there with the tractor one afternoon, I got him to pick up the piece of Puriri and bring it home, and it now sits beside my greenhouse in the garden.

This is the same plant, growing anew this season.  I hope to see it flower later in the year. 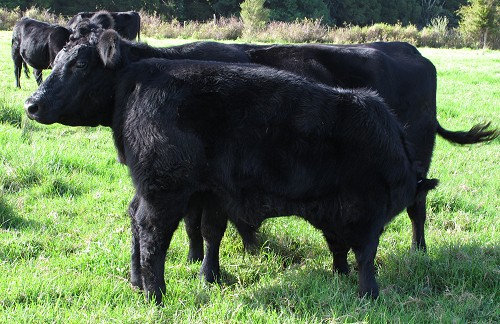 We are regularly amused by this sight, the calf being so huge and still feeding.  Stephan said he was watching the calf as he returned Imagen from milking one morning, and the bull was growling and showing off to his mates, and then his mummy came back in through the gate and he ran to her for his morning feed.

We don't need to stop milking Imagen until the 16th of July, and unless there's some reason I can't presently imagine to wean the calf before then, he can stay with her.  Having him still feeding from Imagen allows Stephan the flexibility of not milking on some days and it does neither cow nor calf any harm.  I took them down to the yards to weigh them.

Imagen weighed 674kg and her calf 375kg.  His adjusted 200 day weight, is 339kg, which was 50% of Imagen's body weight.  50% is the usual figure quoted by people talking about cow efficiency, i.e. that cows need to wean half their own body-weight in calf each year.  200 days is a standard age for the calculation of weaning data (the US uses 205 days for some reason).  When I wean the last of the calves, I'll do the age, weight and weaning percentage calculations for the whole herd.

The results from the blood tests on Emma 93 and Damara 74 are back and they're clear of the three things for which we tested: Neospora, BVD and Leptospirosis.  The cause of abortions in cattle can only be established in around 50% of cases, but having been caught out with Neospora, not being aware we'd had it for so many years, I'm now much more inclined to test to ensure that the things we can know about aren't implicated in further losses.  General veterinary advice is that if a herd experiences any more than 2% pregnancy loss in a year, the cause should be investigated.  I haven't collated my data on known abortions over the years, but our level is reasonably low - most losses have been caused by Neospora.  It is presumed that many losses in early pregnancy are likely to be due to genetic abnormalities (of the random kind, not those caused by inherited genetic defects). 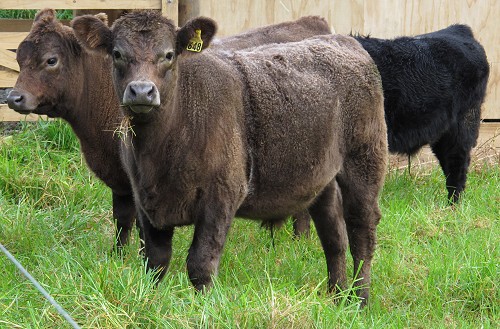 I like this calf, 648, son of my lovely grey heifer 607.  She has reared him well while maintaining enough of her own body condition to reassure me that she may become a good cow.  The calf has a lovely quiet temperament like his mother.

The other brown calf is Curly's son, which we've had to treat twice for Coccidiosis.  Despite those set-backs, he has grown at a respectable 1.1kg/day over his whole life - which must have included some much faster growth at times to make up for the periods of his illness. 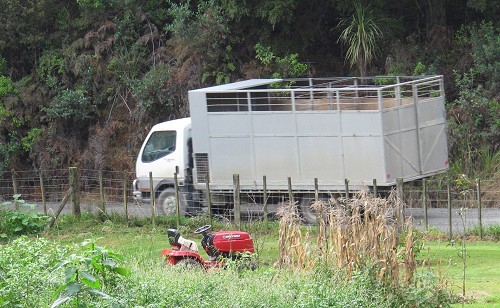 Those two steers and a couple of the black ones went off with Aubin in his truck this morning, to join the others which went two weeks ago, only a few miles away from here.

I really like selling locally and having the animals going quietly on one short truck-ride to their destination, rather than via a hot and stressful day at the saleyards.

That is not our garden and ride-on mower in the foreground. 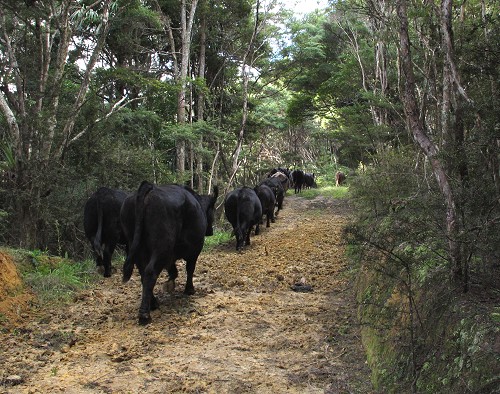 This is a track which goes up one side of the Frog paddock, on the other side of the hill from the Camp paddock.  The cows didn't seem overly keen about being brought in here, so I led them across the stream and up onto this track and they headed off in search of grazing. 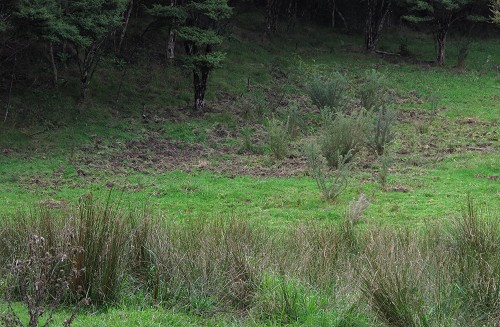 The wild pigs have been busy again. 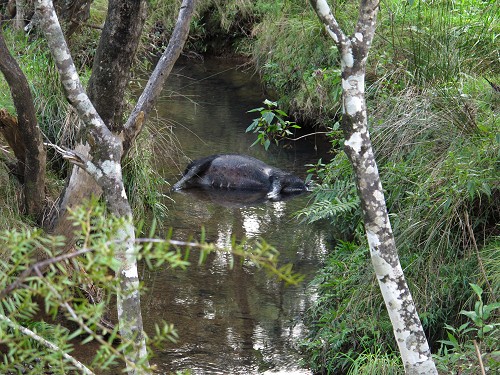 And here's one which won't be causing anyone any more bother - except for having to drag its body out of the stream.  Because I managed to plunge a sharp knife into my finger when doing something quite stupid on Saturday - stupid because I'd been thinking, this is really stupid, I could slip and cut myself really badly ...  I didn't want to grab the pig with that hand, so could only drag it up onto a tiny stony beach in the stream and will have to get Stephan to come and pull it up onto the bank later. 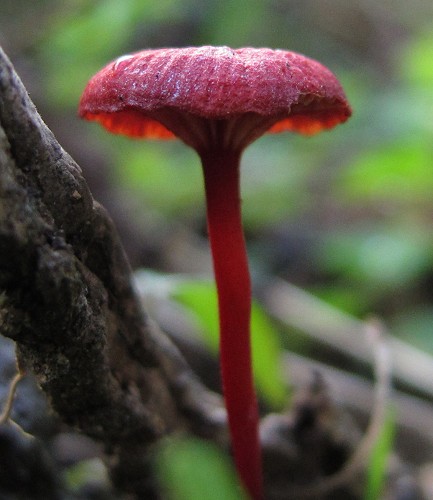 This little toadstool's top was about the width of the end of a pencil - around 6mm or so.  It was growing in an area from which Stephan cut firewood over the last couple of years, amongst the ground litter and grasses. 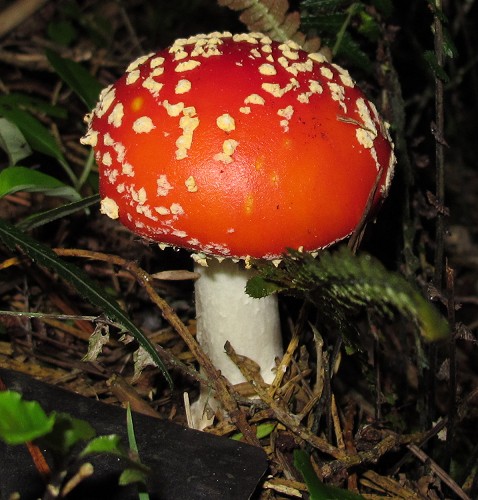 There are enough Pine trees around us to be able to find these from time to time.  They're pretty before they get chewed by things.  The Fly Agaric, Amanita muscaria, poisonous and familiar from lots of childhood picture story books.  They are commonly found under pine trees. 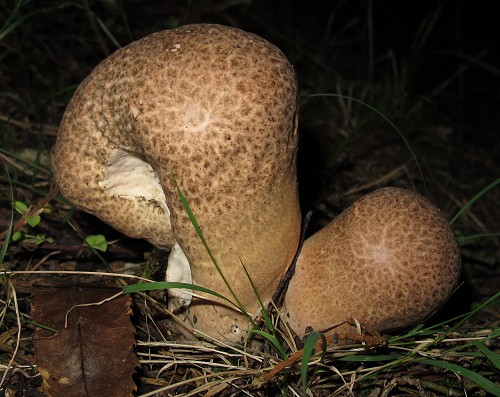 Puff ball fungi are all around, in their various forms.  If you pop them, the spores float out in a smoky-looking cloud.  Presumably they ought not to be inhaled. 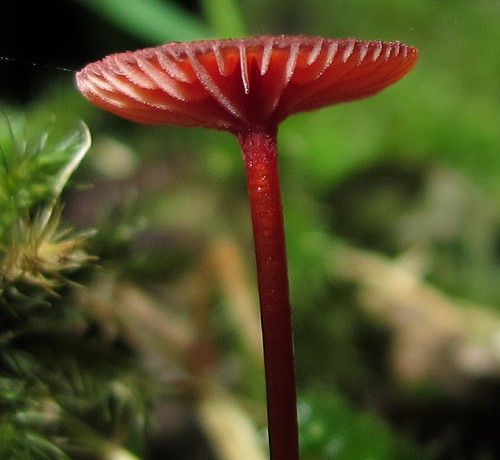 Another little red one, probably the same as the first I found today.

I chaired my first proper Kaitaia Vets Board meeting today, which was also the first for Beryl, our new CEO! 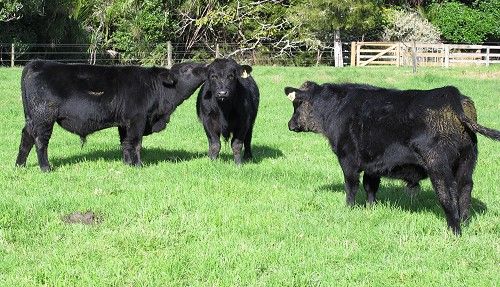 The three little bulls - all around 300kg.  96 has a very mucky rear; they're probably in need of some worm medicine.

Ranu 31's son is licking Athena 72's son, 97.  96, in the foreground, is the son of Damara 74, and is the bull I intend keeping to use in the herd.  97 is a slightly odd-looking animal, with a heavy head and low ears.  I'm waiting to see if he's going to even out a bit.  If he doesn't improve markedly, he'll get a late castration visit from the vet.  I've been undecided about him for a while.  He does come from a family of cattle whose heads are reasonably coarse-boned, and he looks a bit like a couple of his aunts, who turned into good animals. 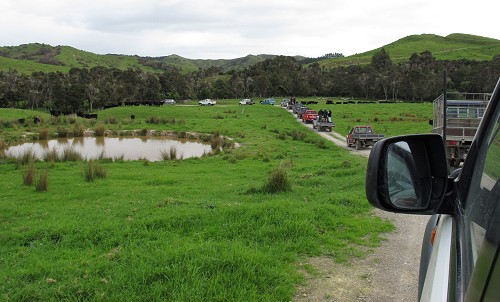 Landcorp Takakuri, inland from Kaeo, had its second annual field day in the Beef Cows 4 Profit series.  Last year's one was great, so we made sure we were free to go again.

The day was very cold, and when we all went out for the farm tour it was very windy and raw, so the tour was not quite as extended and relaxed as last year.

But the morning's presentations and discussion, were very informative.  Lots of data collected since last year was presented, showing how much progress had been made in identifying the causes of calf losses between pregnancy testing and weaning.  The new electronic identification scheme for cattle will make data collection on these big farms far easier than in the past, and I hope they will continue to share their findings with the rest of us.  Having access to the data from a large Far North Angus breeding herd farmed on Kikuyu in similar conditions to our own farm, is fantastic.

Professor Steve Morris from Massey University's Institute of Veterinary, Animal and Biomedical Sciences spoke about heifer calving management, cow efficiency and condition scoring of cows.  Those are three of my key interest areas, although I still haven't got to grips properly with condition scoring - the assessment of indicative areas of a cow's body to determine her overall body condition.  It's always a subjective measure and I fear that one's assessment may not be constant from year to year.  That concern comes from my awareness that I became blind to the low condition of my cows in some years here, on which I've commented before when looking back at the photographs of those times.

I went out to the Back Barn and spent a couple of hours in the sunshine grooming cows, having bought a couple of replacement hard plastic grooming combs the other day - I think they're called curry combs.  My last one disappeared, probably from the back of the bike when I was riding down a bumpy hill track.  Maybe it'll turn up one day.

Stephan was out walking the boundary, clearing and re-baiting traps for stoats and rats. 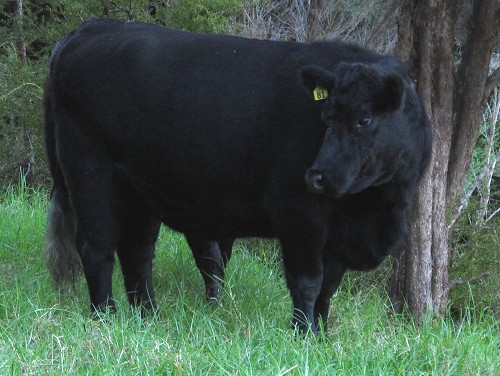 Late in the afternoon I went out to the cows, calves and heifers in the Big Back paddock, and did some grooming there too.  Here is Eva, with her tail beautifully brushed out.