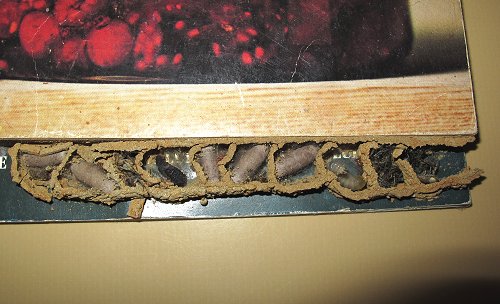 This is a Mason wasp (Pison spinolae) nest Stephan discovered when withdrawing a couple of recipe books from his shelf this afternoon (formed in the gaps between three books, two shown).  All around the house lately their whining little buzz has been heard, as the insects have been building these clever mud hatcheries for their offspring.  They install them in any hole or fold, from the screw holes in the backs of appliances to the folds in curtains.  They'll also build nests in keyholes and up taps, which can be very annoying!

In each compartment the wasp lays one egg and stashes a couple of paralysed spiders.  The grub hatches, eats the (still living but disabled) spiders, and pupates.  I don't know how long they remain in the pupal state before hatching into adult wasps. 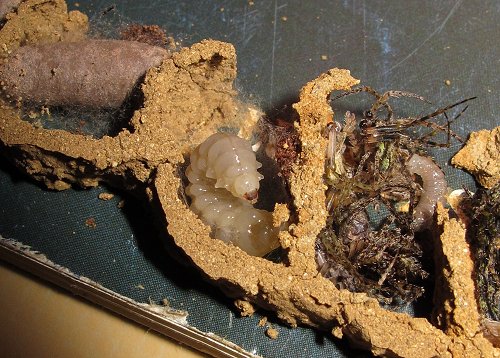 Two of the grubs, one having eaten its spiders, and the other just beginning.  They're fascinating and horrible!

I've tried rescuing the spiders from the wasps sometimes, but they don't recover from the paralysis inflicted by the wasp's sting. 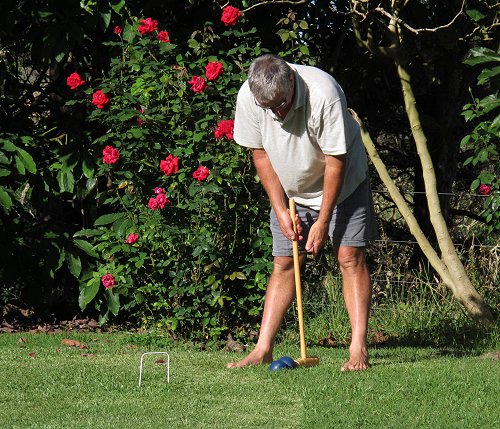 Out for a civilized evening of croquet.  Actually some of the excessively competitive behaviour by some participants wasn't at all civilized.  We played "Takahue Rules", which according to our host mean that the person who is coming last can cheat, by moving their ball to a more advantageous position before taking their shot.  There were a number of preposterous complaints when I took advantage of the rule at one point and steamed through to win, with my partner, the whole game! 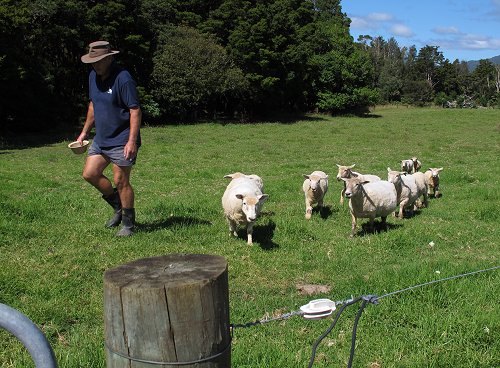 We moved the sheep so I could bring 87's mob of cattle into the House Paddock, so they could sort out any issues with Irene 35 in a safe place, since she needs to now rejoin the mob.  If she's not already pregnant, she'll be back on heat in the next few days and I want her back with the bull now her foot is better. 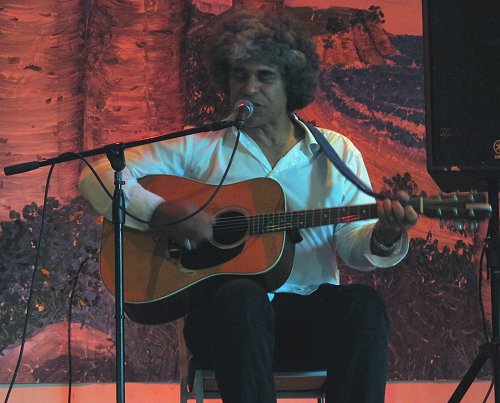 Another night out!  This time to the Swamp Palace in Oruru (the old Oruru Community Hall) to see Paul Ubana Jones.

Unfortunately the hall was poorly ventilated, the evening hideously hot and humid and before half time I had to leave and sit outside to avoid falling over in an embarrassing heap.

At the end of the intermission I came home with some friends while Stephan stayed with the other half of that party to enjoy the rest of the concert. 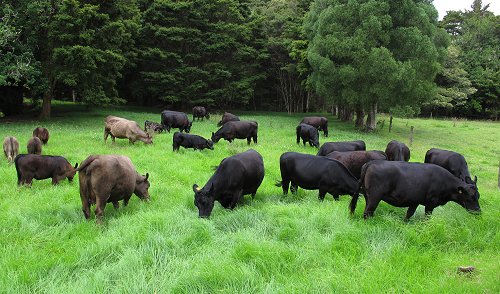 There's grass everywhere since the rain, the Kikuyu having only lacked moisture to get it growing fast and furiously.  It's lovely to be able to feed the cattle really well. 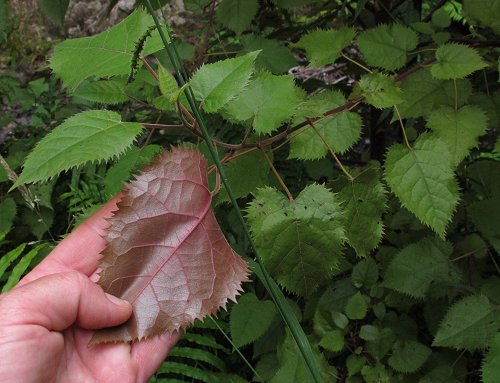 I went for a wander in the Bush Flat reserve, looking for ragwort and interesting things.

This is Wineberry or Makomako, Aristotelia serrata, which I must have seen many times but have only recently been able to pick out.  The underside of the leaves has a reddish sheen, but it's rather like a curtain material I saw a while ago: green from one angle, red from another.  It's a delicate and beautiful effect. 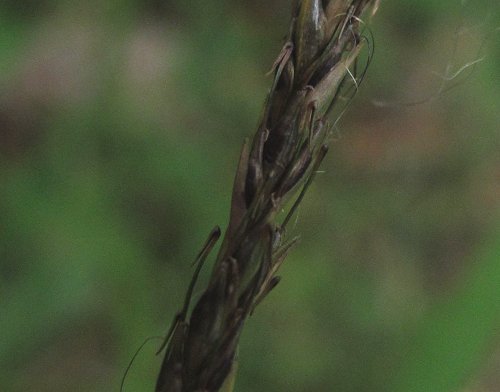 Uncinia, hookgrass.  According to my Nature Guide to the New Zealand Forest it's also "sometimes referred to as 'bastard grass'", because of the pain it inflicts on those of us who walk through forested areas with hairy legs!  The hairs in the picture probably belong to me, having just walked past the plant and experienced a painful surprise.  Some of the seeds had attached themselves to my leg, but others had caught my leg hairs and pulled them out, without dislodging the seed from the plant. 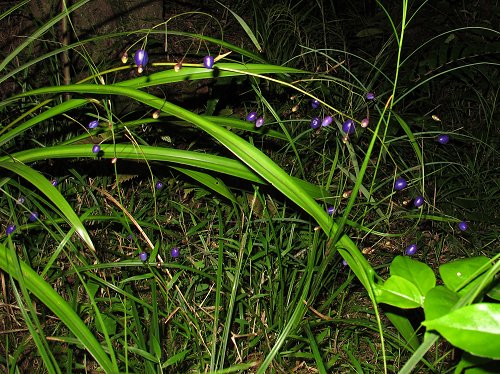 Dianella nigra's delicate berries are around in the bush again.  If you touch them, they fall off.  I tried squeezing the juice onto my shirt to see what colour it dyes it, and to experiment with it as a fast colour.  It was a very pretty deep blue, but I suspect it'll wash out.  I bet it wouldn't if it was my best shirt.

I spent much of today at a vet club meeting.  Our CEO has resigned and will leave Kaitaia in a couple of months, so we are on the hunt for a new CEO to run the business. 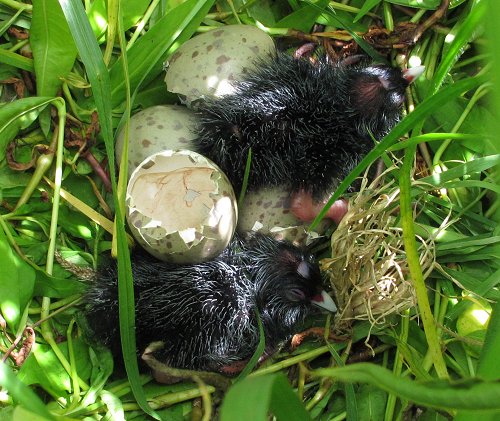 I moved the cattle into the Flat 3 paddock again and then remembered the Pukeko nest.  I thought the birds would be long gone, but no, the eggs are hatching today!  I very quickly rounded up some electric tape and standards again, to protect the nest before the cattle found it and danced all over it.

As I was leaving the paddock, the cattle all stampeded away from the area, proving that the parent birds are quite capable of scaring the large beasts away from their babies, without my assistance.  But I'd rather not have either species disturbing the other.

While trying to graze the paddocks across the flats, I've found the presence of the neighbour's Jersey bull rather annoying.  He has no earthly use - not for breeding, will never make good meat, is a bull only because nobody bothered to make him not a bull ...   I have double-taped the boundary when the cattle have been in that far paddock, and the Jersey paces up and down the fenceline growling and posturing at my bull, who spends some of his time doing the same back.  I'd far rather he just got on with his appointed task! 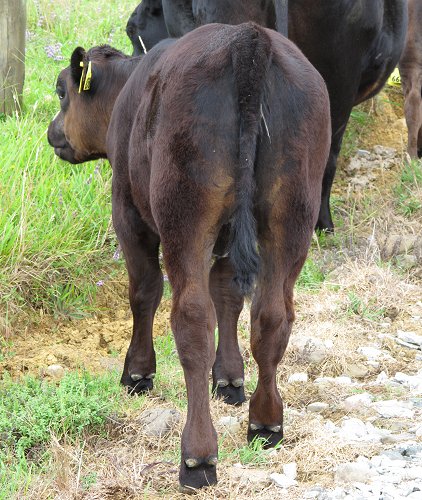 658, the last calf to have blood scours, has now shed all the nasty mucky stuff which was all over her rear end, leaving clean new hair where the other fell out. 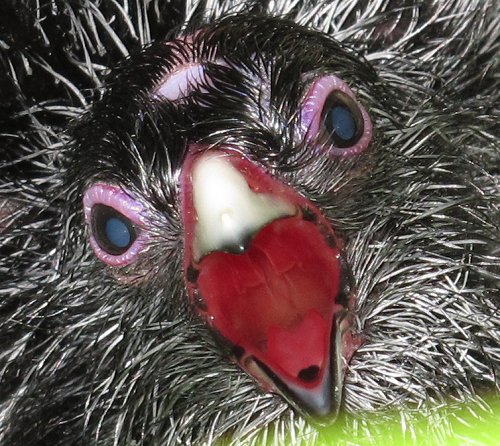 What can you possibly say about a face like that?

Flies are this summer's most annoying problem, buzzing hordes of them having emerged since the rain.  In the house the cluster flies gather wherever the air is still.  In the kitchen area they settle on the floor, benches, windows and at night they all congregate on the ceiling.  If one stands anywhere to work - doing dishes, food preparation etc., they land on the skin and tickle!
For the cattle I discovered today the problem is worse, with far more biting flies on their legs and stomachs than I've ever seen before.  Horrid!

We took 90's mob to the yards this evening to give the calves their booster shot of 7in1 vaccine.  We also set things up to have our first attempt at inserting the new RFID (Radio Frequency Identification) NAIT (National Animal Identification & Tracing) tags.  I had thought the calves might be getting a bit big to wrestle by hand to hold them still enough to put the ear tags exactly where they need to be - deeper into the ear than the numbered tags.  But the process went surprisingly smoothly.  Our biggest problem was the scattiness of the calves.  I don't know if it was because of the heat, or because they're naturally nervous this year.

To hold them still for tagging, we restrained them as I did to inject Curly's calf a few weeks ago, with a bar across the race behind the calf, at such an angle that its bottom wedged back into it, which controlled movement in any direction at that end.  Stephan held each calf's head against his thigh as he positioned the tagger and applied the tag.  They seemed quite unaffected by the new button tags, far less than by the larger numbered tags when they go in.  Perhaps it is the visual disturbance which they shake their heads to clear when we first insert their numbered tags?

Having seen bull 90 active again in the last couple of days with three cows he mated three weeks ago, I decided some more reorganisation was necessary!  I don't know if he's sub-fertile, or he just wasn't very good at his job as a novice, but either way it would be sensible to replace him.  If he got all of the other cows pregnant, then that's great; if he didn't, then I need another bull in with his cows.

We brought 87's mob in to the yards ready to tag and vaccinate the calves, then went and fished 90 out of his mob - he was quite happy to head toward the yards, where the other two bulls were already making lots of threatening noises at each other. 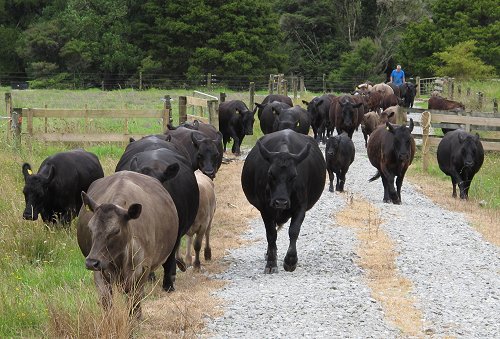 Grey 443 and her calf had been keeping 69 company in the Pig paddock, so she came back out with the cows.  There didn't appear to be any fighting as she made her way right through the mob to the front and into their new paddock.

90's ex-mob were still at the bottom of the paddock behind their electric tape, and this lot, with bull 87, went into the top.  I thought I'd let them growl through the tape for a while before letting them mix in a few hours. 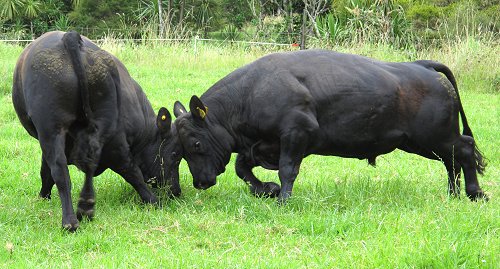 Back by the yards I'd put an electric tape across the Pig Paddock, let 90 into the bottom of the paddock and then drafted 89 into the top.  I hoped they'd do all their growling for a while and by the time we took the tape down, they'd have settled some disagreements verbally, requiring less actual fighting.

But 89 jumped or went under the tape as Stephan was following the cows out and it was all on!

When we walked back from moving the cows, they were still at it.  They've only been apart for about four weeks and before that spent their whole lives together.  They did a lot of pushing and chasing until 89 was so puffed he was blowing out his cheeks, but it was he who still wanted to fight.

Eventually they settled down and did some grazing, a bit more pushing, had a rest and all returned to normal. 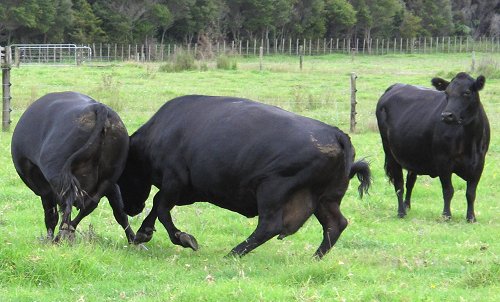 Later on, when the sun made the day hot enough for the cows to need the shade of the trees, I had to take the tape down between those two mobs.  There were a few fights and crazy dashes around the paddock, but they too settled fairly quickly.  It always looks very dramatic, and it pays to keep an eye on where the fighting cows are - I had to shift pretty quickly to avoid a couple who were about to run me over in the middle of their tussle. 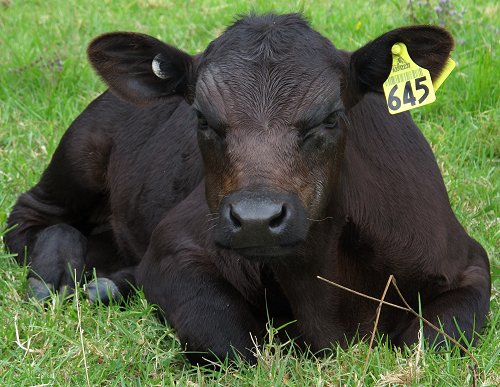 This is 604's son, one of the last four born last year, with his two new tags.  It's hard to see some of the NAIT tags from the front, but they don't need to be read by eye.  All of the big handlers - the sale yards and meat processing plants - will have RFID readers, which will read the tags when the cattle pass them.  Thus all the cattle must now be tagged with those RFID tags in their right ear, because that is the side on which the readers will be uniformly installed.