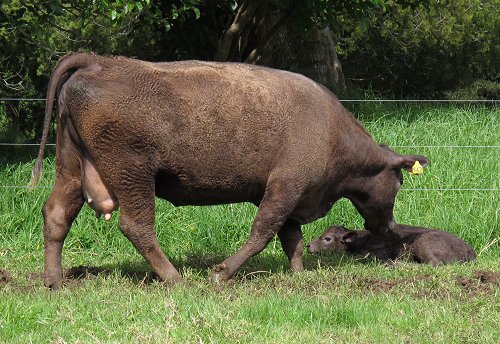 This is Curly, with her daughter.  Every year Curly has calved (this is her third), Stella has asked if her calf could please be named Endberly (with a silent d), something to do with her being born at the end of October, except it's actually the middle ... I'll have to ask her to explain it to me again.

Anyway, the calf is a heifer, could well be kept in the herd, so she can have the name.

The annual and disruptive car rally drove up our valley today, with the usual disturbing explosive noises.  Fortunately it didn't go on for long, so hopefully it's losing popularity, or less people can afford to take part.  I'll certainly never be a customer of Tanoa Hotels - Paihia, who sponsored the section of the rally which disturbed our peaceful valley today! 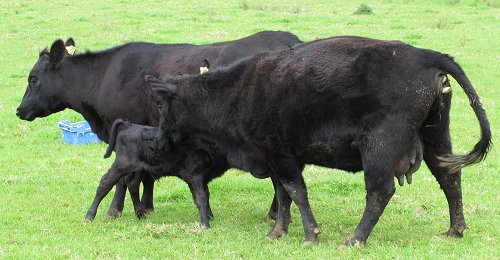 Ida 75 began looking uncomfortable during the rally's noise, but didn't start showing significant signs of labour until after the disturbance had ceased.  Then as her own calf began to appear, she took a worryingly excessive interest in 628's little heifer, letting the calf feed from her, licking its navel and so on.  I asked Stephan to come with me and we headed across to the paddock with an electric tape, so we could separate #75 from the calf, and then get her out of the paddock altogether.

Once she was out, she continued to look over the fence with great interest, but as soon as she needed to lie down for her next set of contractions, which resulted in some more birth fluids pooling on the ground for her inspection, she "clicked" back to normal behaviour and soon produced a son, which she cleaned and fed quite happily. 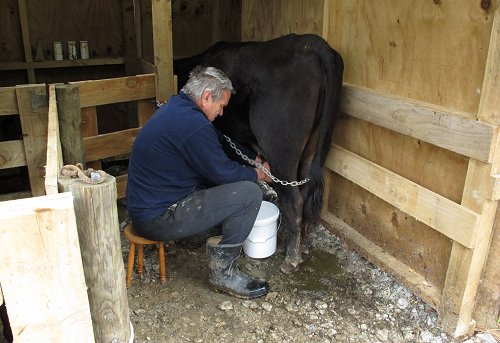 Zella is proving to be a fabulous little house cow!  She has started heading straight into the bail when it's milking time, stands quietly, and is easy to milk.  Stephan's very pleased with her.

There's now an extra gate in the calf pen, dividing it in half.  That has two purposes: firstly to keep Zella's calf at her head while she's being milked, which stops her from wanting to step back or turn to see where the calf is; secondly Imagen's calf is extremely rough with Zella's calf when his bottle is finished and he bunts at everything trying to find some more!  He kept knocking her sideways against the wall and causing all sorts of upset. 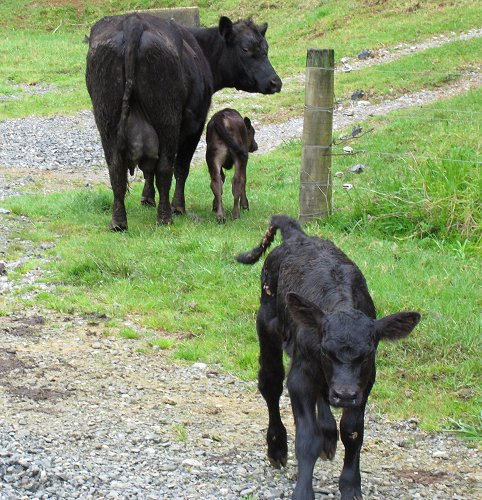 Imagen is completely fixed upon Zella's calf as her own, although she seems to cope with the fact that the calf still feeds from Zella.  If her own son goes near her, she snorts at him and sends him packing.  That look in her eye says it all!

Two calves born today, to 546 this morning, and Squiggles (Ivy 73) this evening while I watched.  Squiggles had a heifer and I haven't had a chance to see what the other calf is, happy enough to see that it is alive, cleaned and fed.

When I went to watch Squiggles, Ida 75 was calling across the paddocks and her calf was nowhere to be seen.  It seemed unlikely that her calf would have gone through the paddock of five bulls and beyond, but later I discovered that was exactly the case and the calf was curled up by the fence in the paddock one across, fast asleep.  I sent Ida 75 along the lanes and across the 5d paddock without any trouble, since she obviously knew exactly how to get to her baby. 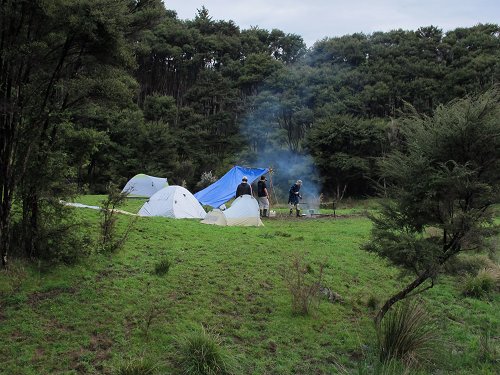 Mike and four boys have been camping for a couple of nights, out in the Swamp Paddock where the ATC cadets camped last time they were here.  They spent some time yesterday with Stephan cutting firewood and were about to begin striking camp when I took this picture this morning. 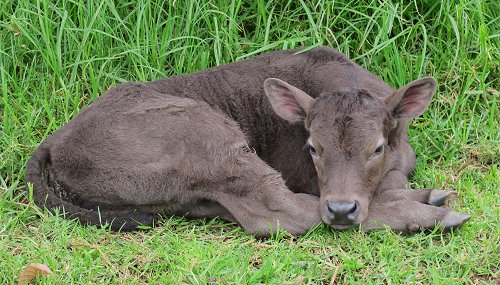 This is little Endberly again, sleeping just under one of the Puriri reserve fences, which is why there is longer grass behind her than in front.

A few days ago, after it had been in his side for three days, I removed the plastic tubing drain from Finan and today we took him to the vet to have the staple removed which had held a cut closed.  He's very pleased to be allowed to go where he pleases again!

I went over the road this afternoon to check on the six cows there, having only seen them from afar over many days.  All are fine, but I'll bring three of them down off the hill tomorrow, since their udders indicate they won't be far from calving now. 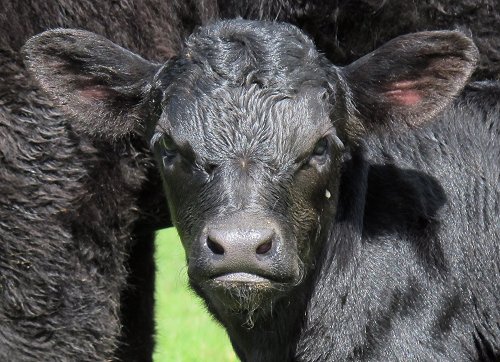 It was showery and cold this morning, so I didn't go to get the cows from over the road until late in the day, by which time I could only find five of them.  I went hunting for 486 and found her under a tree with her calf.  Both seemed calm and alright, so I left them to it, and we took the other two cows I think will calve soon across the road. 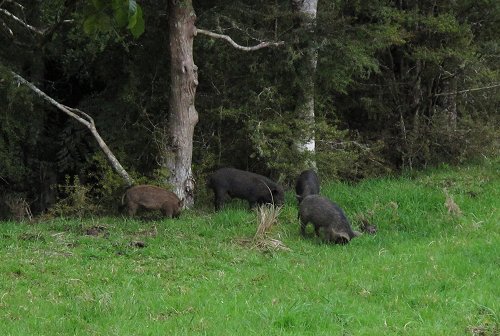 I spent my day writing an article and moved some of the cows and calves around this afternoon - and discovered our unwelcome extra livestock had been actively digging up the pastures out the back.  What you see when you don't have a gun! 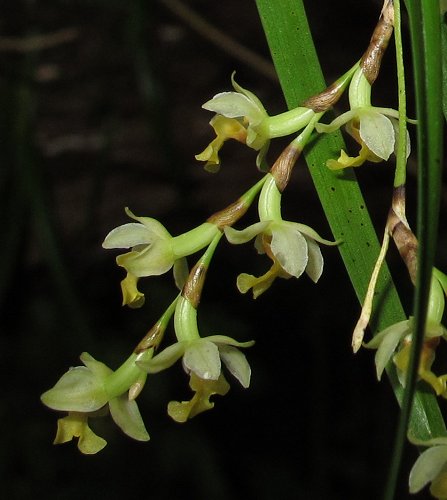 The Earina mucronata are in flower.  I've been watching the buds develop for the last couple of weeks, so checked their usual haunts for the ones hanging low enough in the trees for some good photos. 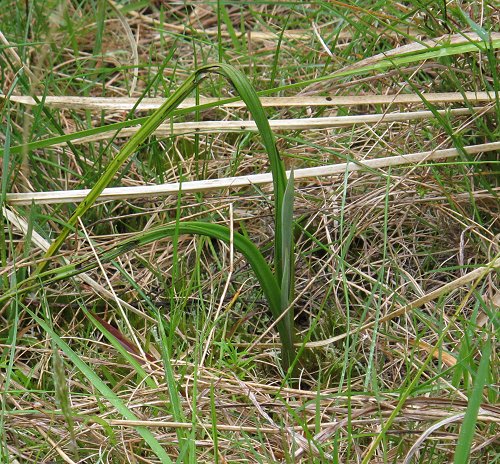 A couple of the Sun Orchid plants I discovered last year only after they had set seed, near one of Stephan's bait stations.  Hopefully I'll get to see them in flower this season. 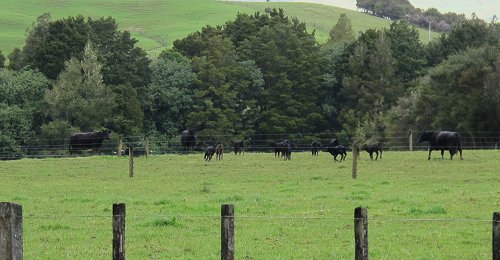 I'd left a couple of gates open for the cows and calves to move down the flats, but the cows had gone off and left the calves behind.  As I came back from my orchid walk, I could see the calves all galloping madly around their paddock, while a couple of concerned mothers came running back to see what was going on. 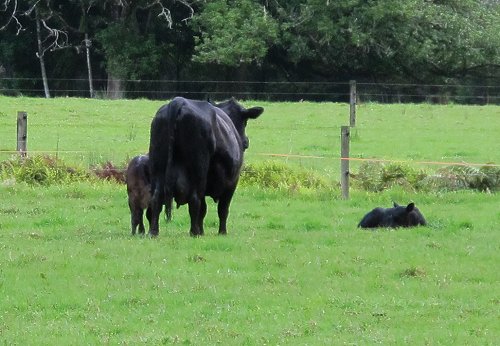 I had to take a picture of this scene to make sure I'd not been mistaken - and Stephan had the binoculars on them from the house as well: Imagen, feeding her granddaughter, while her son lies rejected beside her. 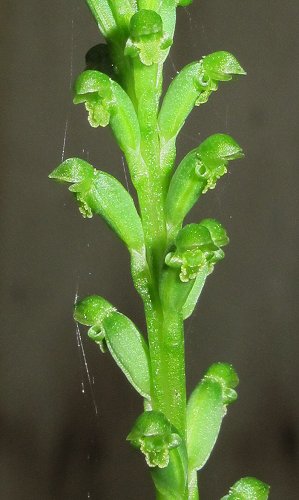 Onion Orchids are flowering all around the farm, but these are in my greenhouse.  They're not particularly striking in colour and they're tiny, but it's that which makes them so fascinating to me. 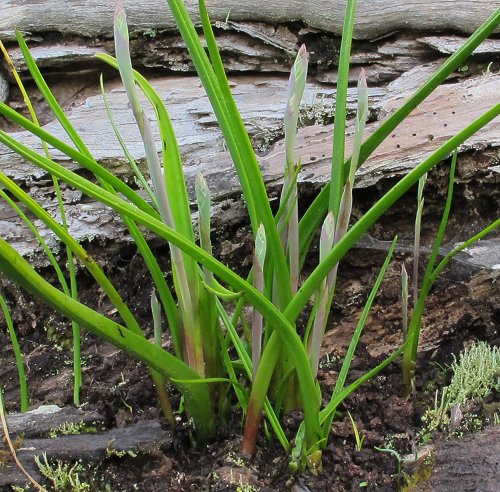 The Thelymitra on the Puriri log is progressing nicely, looking like it'll flower a couple of weeks later than usual this year. 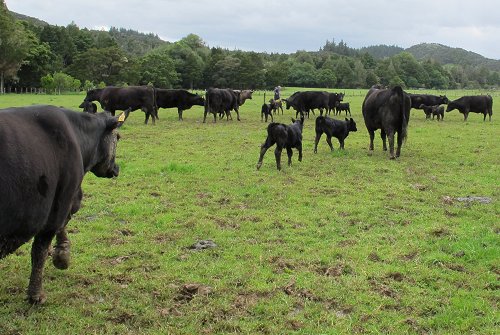 The cows, having failed to entice their calves from the paddock they were in yesterday, were all back there this morning, with nothing to eat, making the ground increasingly muddy; so we went out to force a move. 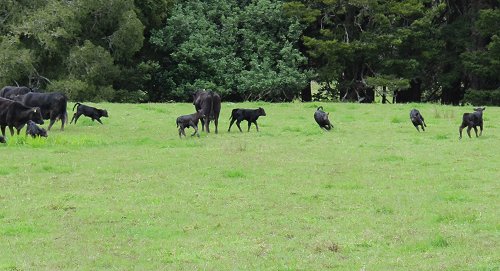 It took a little while to gently coax them all through two sets of gates.  Once in the open in the intended paddock, the calves ran around like mad things. 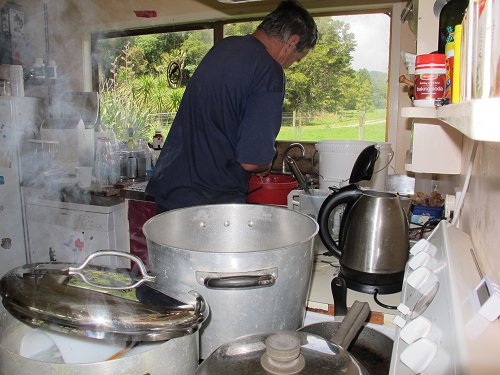 Cheesemaking is now in full swing, with so much milk coming into our kitchen every day.  Zella's producing about five litres in the morning, and it would seem that her calf is getting much of her day's needs from Granny Imagen, so Zella has a reasonable amount in the evenings as well.  It's lovely and creamy, as it should be, with her half-Jersey breeding. 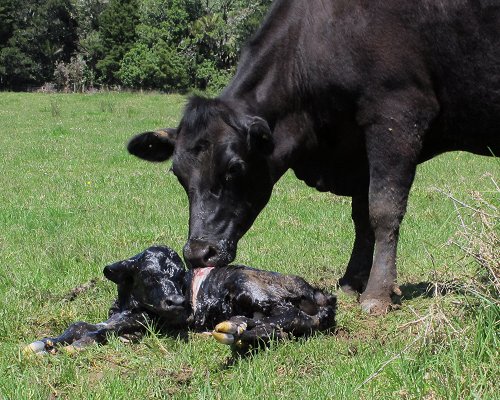 542, daughter of 486 who calved on the hill the other day, produced a daughter this afternoon.  542 was the last cow to calve last year, so her calving time has come forward by about six weeks this year. 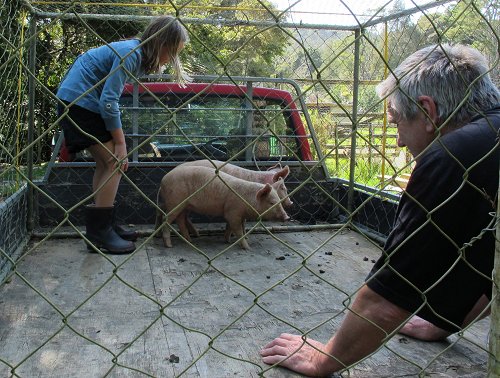 Stephan went to town this afternoon to collect two little pigs and Stella (Stella's the one in the blue top).

Because she's little, Stephan asked Stella to get into the cage to guide the piglets to him, so he could put them into their new home - or their temporary home in the woolshed until they settle down and know that he's their source of food and comfort.