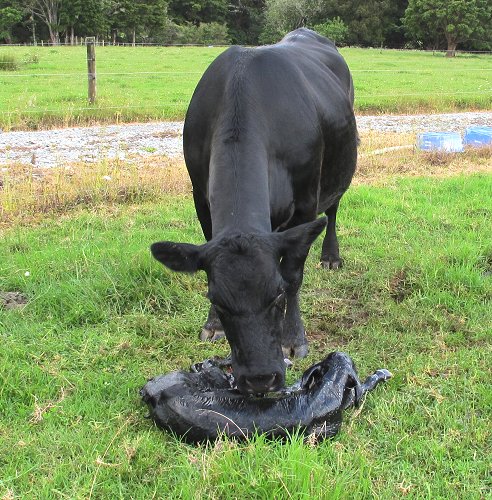 Abigail began today with the distracted look common to cows in the first (invisible) stage of labour.  By nine she was pacing around in obvious labour, so I expected she'd be calved within about half an hour.  But nothing seemed to be happening, despite her lying down and getting up several times.  I made sure my hand was clean of obvious dirt and did an internal inspection while she lay down and found that the calf's front feet and head were presenting upside-down.

I decided the best thing to do was not panic, so I left Abigail and walked off to set up the gates so that I could take her to the yards, hoping things might change for the better in the mean time.

When I came back things didn't look any different, but another internal inspection told me that the calf was well on its way to being the right way up, after Abigail's frequent changes in position.  In a few more minutes the calf's front feet were visible and she was delivering her new son as the time passed ten o'clock, the very moment guessed for this event by Megan!

The calf, like all of Abigail's progeny, is tiny and very pretty.

I took this picture because it amuses me that I so often find the calves sitting around in numerical order.  But I realised, as I was processing the photo, that there is another point of interest: these two are 709 and 708, the daughters of 479 and 488 respectively.  Their elder sisters are 611 and 613, who are nearly always found together. 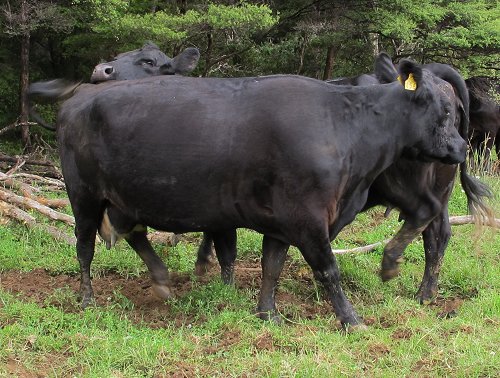 I'm already seeing a fair amount of heat activity amongst the cows.  How quickly they return to oestrus after calving depends on a number of factors mostly related to how well fed they are.  This year the cows are all in great condition and despite the cold dry spring, have remained glossy and well-covered.  In most years I see very little indication of cows being on heat before the mating period begins. 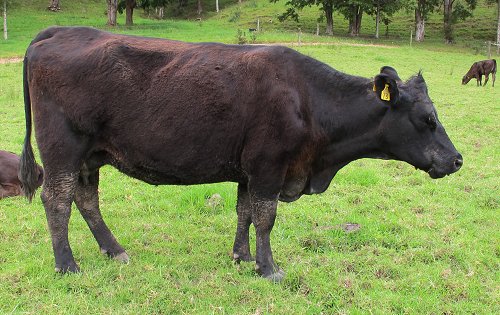 This is Squiggles, the worst-conditioned cow in the herd.  I doubt she'll ever look much better than this.  Squiggles is, I believe, an excellent cow genetically, which is why I kept her.  She looks so poor because of her troubled beginnings - ancient Ivy was her mother, so she was poorly resourced before birth, hardly fed afterwards and weaned early by Ivy's death.  Squiggles' calf this year is a surprisingly good-looking specimen and I will follow her progress with interest.  From some of the things I've read recently about epigenetics, I expected Squiggles' poor start to cast more of a shadow over the life of her daughter, but so far that appears not to have been the case.

The bees Jill and I found last Thursday, are still hanging in the tree over the road! 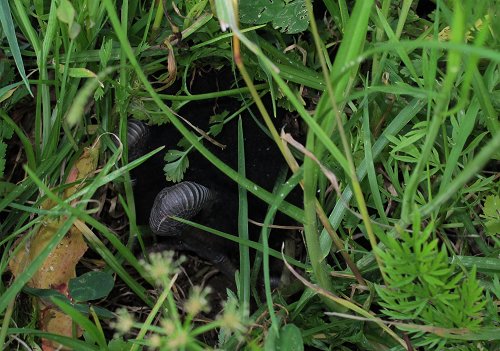 I surprised a Pukeko family this afternoon, and the two or three parent birds which were supervising their youngster/s took off across the grass in a hurry.  I assumed there was a nest, so kept my eyes down to ensure I didn't accidentally stand on it as I walked through where the birds had been.

These knees attracted my attention, although it took me a moment to realise what I was looking at.  They are the leg joints of a Pukeko chick which has buried its head into the grass, and I've photographed its rear end, although being black, it was hard to distinguish the feathers under the grass.  I'm glad I didn't stand on it!  The bird's body would have fitted in a cupped hand, although of course it wouldn't have liked me to measure it in such a way. 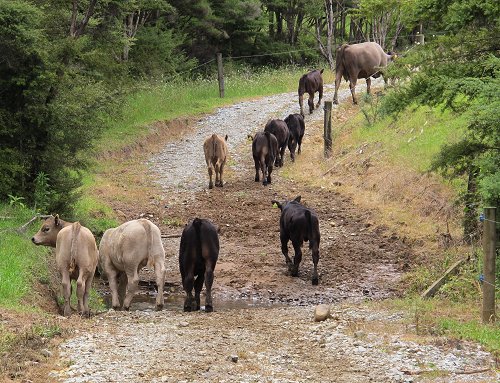 The calves have now learnt about gates, fences and river crossings, so getting them out to the Back Barn paddock is far less of an ordeal than it was a few weeks ago. 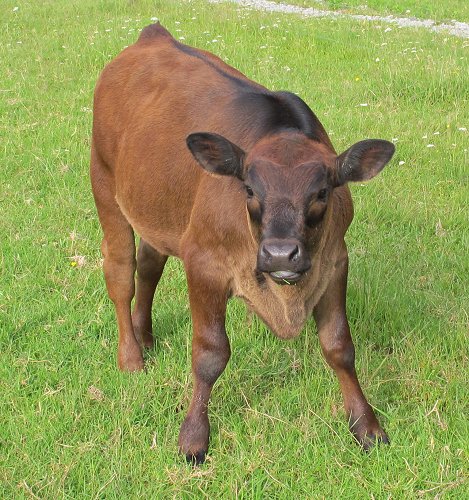 This is Zella's daughter.  She was quite light in colour when born, but has lightened even more in the last few weeks.  Now she's going dark down her spine.

When Abigail was lying down today, something prompted me to check that her udder was alright, so I squeezed the accessible teats.  What came out of the front right teat was not the right colour and from the back one, I squeezed what looked more like blood than milk.  When she stood up I tried the other side, which thankfully produced good milk.

Sometimes blood vessels rupture inside udders, perhaps from the physical trauma of being knocked by the cow's legs, or maybe just from too much pressure over the period of early lactation.  Abigail developed mastitis in this same side two or three years ago and I now wonder if it started then with this same problem?  I milked out as much as I could from the bloody quarters, since it won't be any good for the calf to drink and I don't want her getting mastitis again. 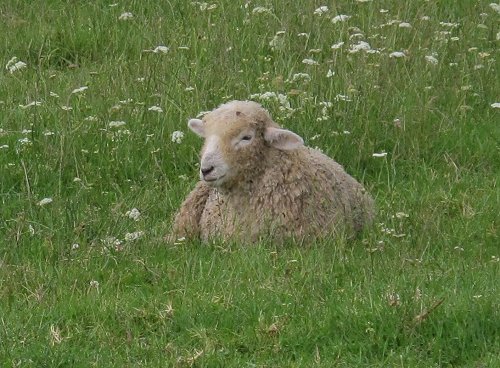 The lamb didn't come dashing for her feed this evening, so I had to go and find her.  She was lying down looking very dejected.  I suspect she'd been lying flat-out on her side during the day, from the amount of stuff stuck to her wool.  She wasn't interested in the bottle and when she stood up, grunted and looked really uncomfortable, as well as wobbling about a bit.  Instead of trying to get her to take her bottle, I went and got her a shot of penicillin instead.  It's three days since we docked them and it's possible she has a related infection and it's quite possible it'll be susceptible to such treatment.  I gave her the injection and left her where she was, expecting I'd very likely find her dead tomorrow, but there wasn't much else I could do for her.

We went out for an end-of-year gathering for a few hours and on our return at around 11pm could hear the insistent bleating of a very hungry lamb!  Penicillin is miraculous stuff.  I will naturally give her a course of several days' injections to ensure we completely subdue whatever ails her. 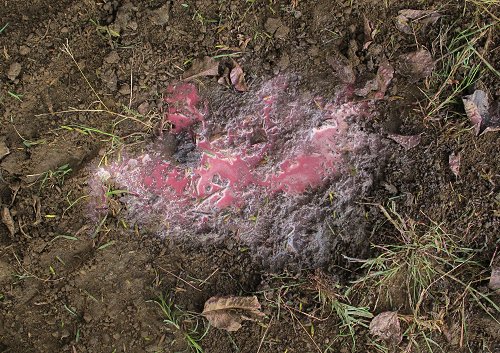 Yum!  Well it might be if it really was strawberry milk.

Abigail's milk is getting paler, although it's obviously still quite bloody.  The calf suckled a little on the bloody side, so that'll help.  He seems to be feeding well. 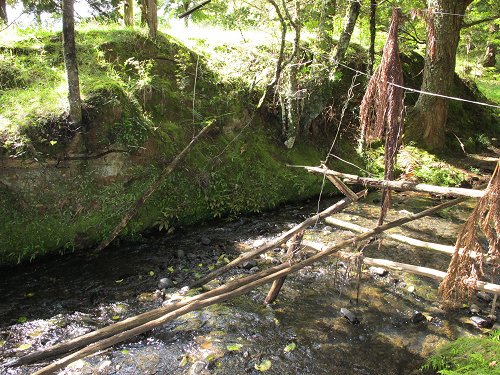 I coppered all the cows today, it being nearly mating time again.  The copper injections are supposed to be given a couple of weeks before mating commences, because it's stressful for the cattle, but in the first year I gave them really late, we had a fantastic conception rate and so I've not worried about the timing ever since.

I put the first cow mob into the Small Hill paddock, but then remembered this flood gate had fallen apart in the last couple of floods.  The fencing crew was not available today, so I had to effect a temporary repair myself. 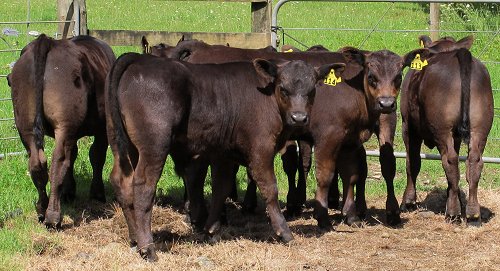 Some of the calves on their way out to the new paddock.  They've got their dads' bums!

When I was about to send the second mob of cattle out to the PW (the paddock with holes all over the place) I thought to extract Squiggles, to try and give her some extra attention and feed before mating begins.  I was going to draft any one of the other cows to stay with her for company and then realised the date and felt a chill as I looked at Eva ...

Eva and her daughter Emergency, stayed safely in the Pig paddock with Squiggles for a couple of days while the rest of the mob went into the dangerous grazing areas.  Eva probably won't ever get into trouble again, but on the second anniversary of her near-death experience, I couldn't bear to tempt fate. 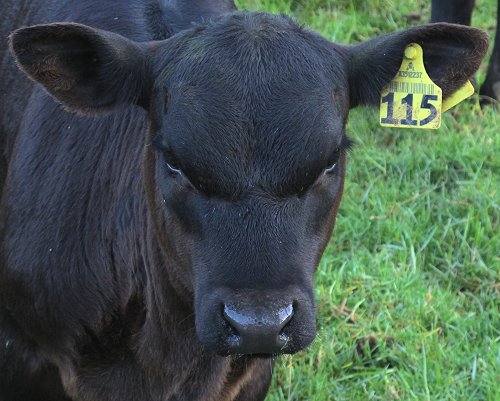 This is Eva's sister, Demelza's daughter, the calf which nearly wasn't.  She still has single white hairs growing in several places on her face; very strange. 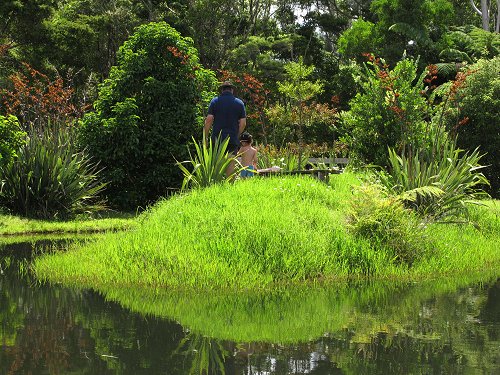 Today we had a gathering for some of the family because we won't be having one on Boxing Day.  Most of the family members who like to get together here then won't be in the north, so today Sarah and Karl, their two little boys and Miriam came out for lunch and fun in the pond.

Kikuyu grass really is that green! 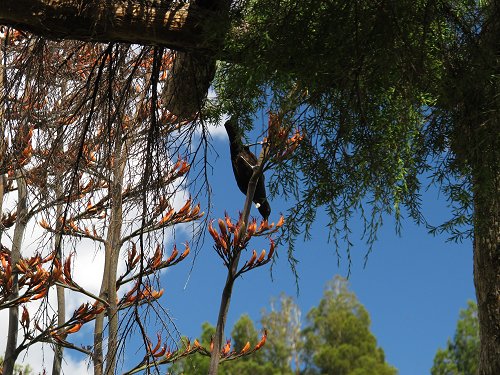 All around us, including just behind where we were sitting under the Pergola (or is it a Gazebo?), Tui flew in and out of the flax flowers.  They're stunning to watch and listen to as they compete for space, threaten and flirt with each other.