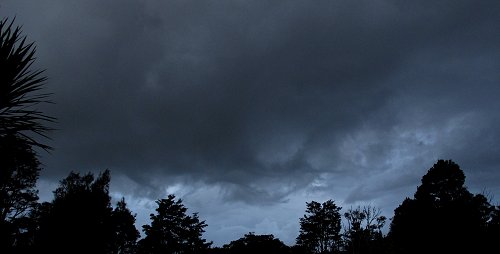 We went out to an 80th Birthday Party lunch!

When we came home the clouds were extraordinary.  The weather this season has been very strange, with far more thunderstorms than we usually experience, along with the associated tornado events and very strong winds.  Presumably there's a lot of air movement creating those strange clouds. 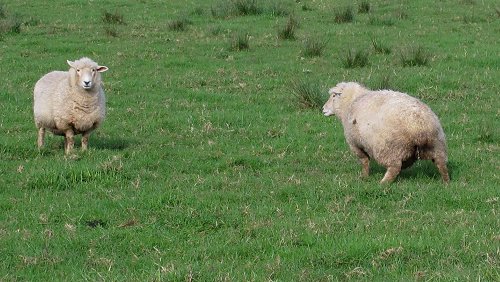 I went out to check on the cows out the back, and had to stop on the way to turn the ewe which is prone to being cast (stuck on her back waving her legs in the air) back over onto her feet.  The second thing she does, after staggering away from me as quickly as she can, is empty her bladder.  Sheep can't wee lying on their backs. 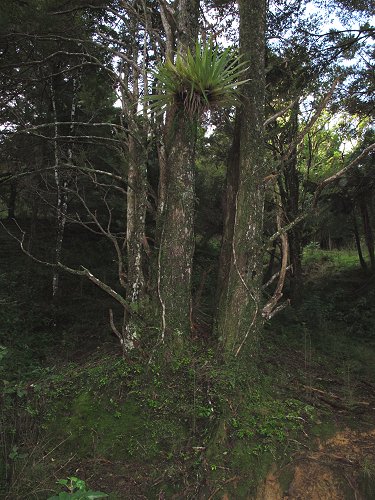 I walked up through the Big Back paddock, via one of the main gullies.  I was of course looking out for orchid plants.  To my surprise, I found a number of little Sun Orchid plants around the base of these Totara trees, despite this being a dim and damp area.  I'll have to remember to go back and check them later in the season, to see if they produce flowers - if they're not eaten by something first. 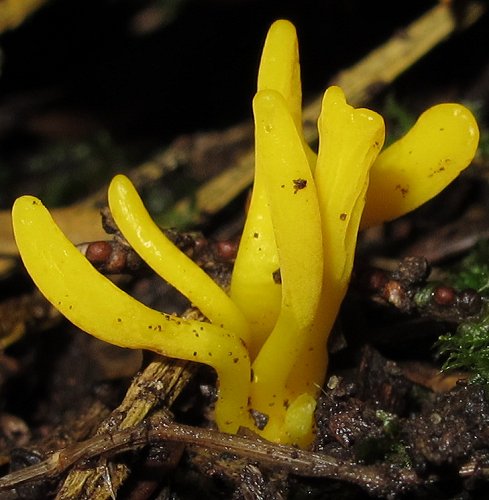 The colourful fingers of these little fungi have been appearing on the ground in the last few weeks, brightening things up beautifully. 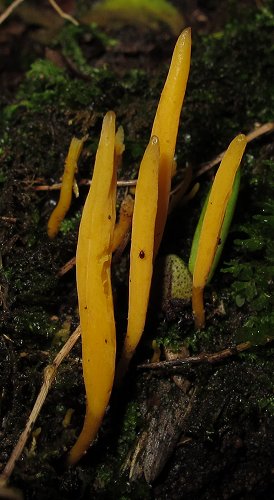 So far this year I've seen a couple of different shades of yellow, bright orange and beige.

They're quite small structures - the green behind one of the yellow fingers in this picture is a Totara leaf, which measures only about 1.5cm, or half an inch.

It is fortunate that the weather is so mild, because I wander around with quite wet knees, with all this close-up photography of things on the ground. 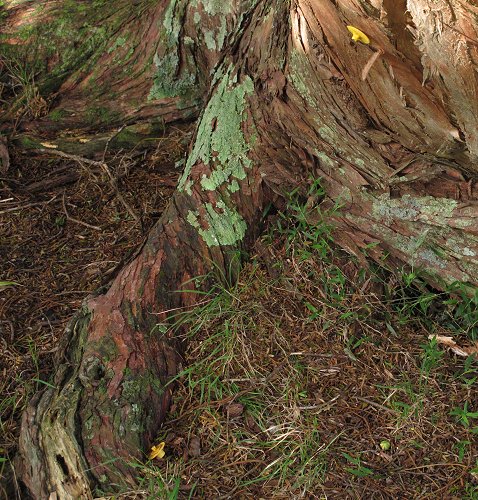 The cows were in the Middle Back, doing a nice job of getting the grass under control.

I went to have a look at whatever the bright thing was on the trunk of this Totara tree, and discovered half an ear tag, with the other half on the ground below.  Somebody must have been itching her ear, and broken the tag.

I had a look at all the cows which have these secondary tags, or rather I looked for the one which no longer had the tag she had been sporting last time I saw her.  It turned out to be 486, whose primary tag also broke some time ago, so now she has no tags at all.  There are a number of tagless cows and while I can tell them apart quite easily, Stephan finds it much more difficult when he has to check numbers in my absence, not knowing them nearly so well.

Most of the cows are looking pretty good.  But I've found what I suspect is evidence of another slipped pregnancy, this time for Demelza.  She has what looks like blood-tinged mucous on her tail.  She didn't calve last year either, so I'm probably going to have to make the hard decision about her this year.  Two abortions in a row is no good.  Her daughters Eva 81 and Emma 93, are both pregnant for the first time this year.  I hope they prove more reliable than their mother. 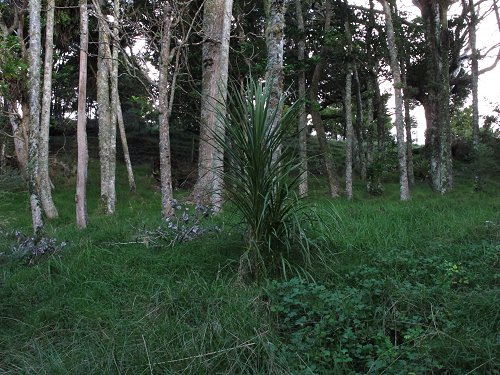 Just through the fence, in the reserve area at the top of the PW, there's a lot of grass under the trees because the canopy is so open.  Fortunately that seems not to stop everything from germinating and growing up through it, like this young Cabbage Tree.

It would probably be worthwhile doing patches of weeding, so that whatever tree seedlings are there can get a better start.  I'll put that on the list of things to do. 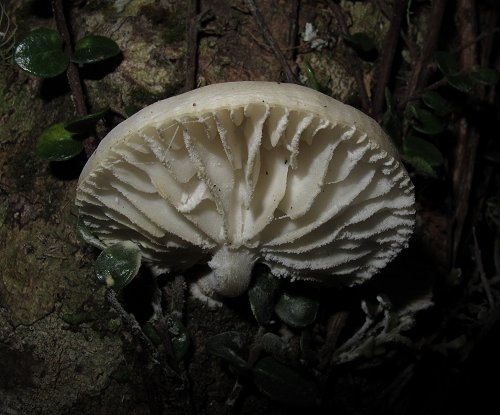 A little sideways toadstool, growing out of the side of a tree trunk, probably Oudemansiella australis. 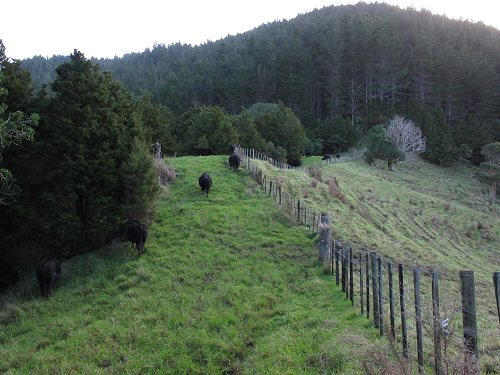 When I had finished wandering around looking at interesting things, and had ticked all the cows on my list, I opened the gate at the top of the paddock and let them into the Big Back.

This is the middle ridge at the back of the farm, between the Big Back on the left and the Middle Back on the right. 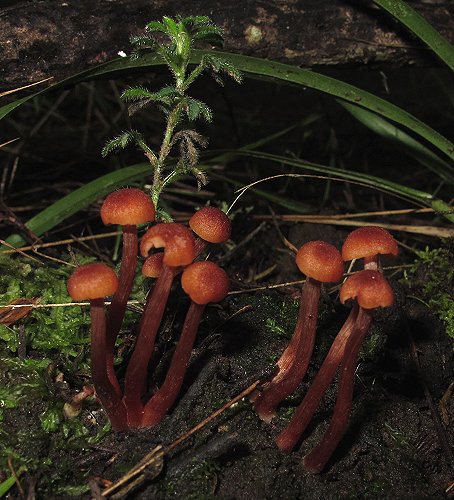 More pretty fungi, these on the PW hillside.  I haven't been able to identify them. 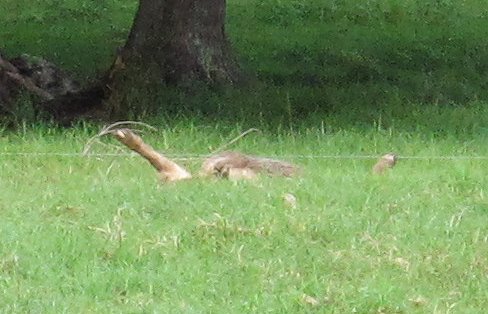 It took me ages to see this sheep, lying as she was just down a slope at the river end of Flat 1. 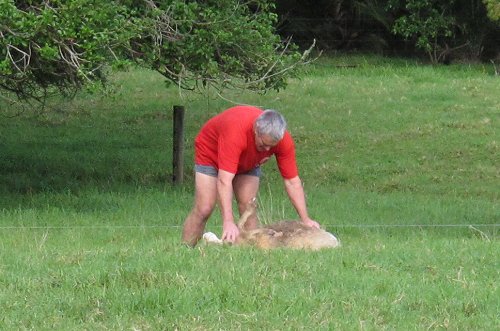 Having thought it was the ram which was cast, I asked Stephan to go and turn the animal over, but it was the usual ewe... 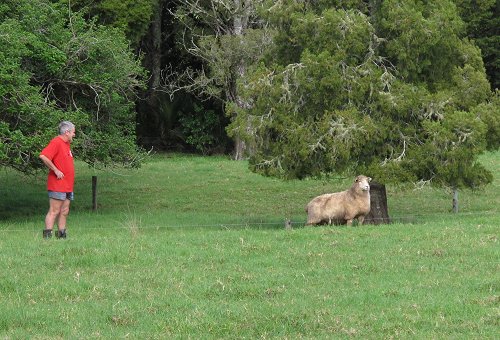 ...who did the same with Stephan as she does with me: staggered off to a comfortable distance, where she stood looking disoriented for a while.

If a sheep has been cast for many hours, it is best to hold it upright for a while before letting it attempt to walk away.  But this ewe is so big and heavy and on the occasions she's been cast lately we've found her quite quickly, so she's better left to run off as soon as her feet touch the ground. 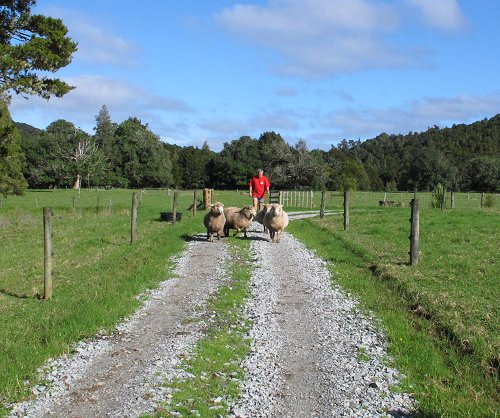 A little later we brought the three ewes and the ram in to the yards and redrafted the two mobs.  Now they're a mob of eight ewes and a separate mob of four wethers and the ram.

The ewes will have been pregnant for a while now and we could have taken the ram away from them some weeks ago, but didn't get around to it.  I noticed him bunting one of the ewes with his head the other day, so thought it would be wise to get him away from them. 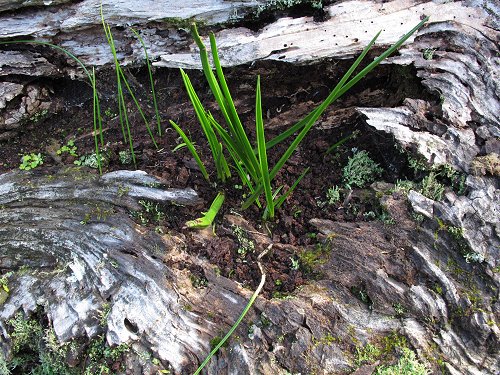 I'm trying to work out if I can predict their flowering time from their growth during the year.  They were about a week later in the first year I found them (2008), than they were in the next two years (2009 and 2010).  This year has been warmer than normal, so I wonder if that will change things?

The last picture I posted was in April. 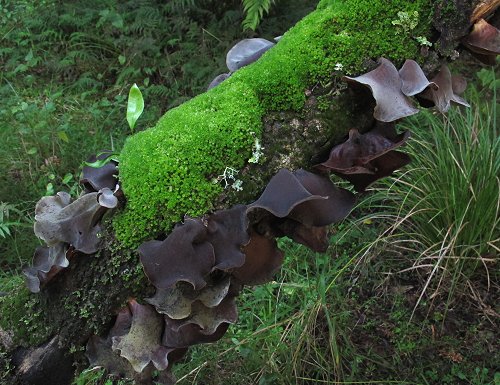 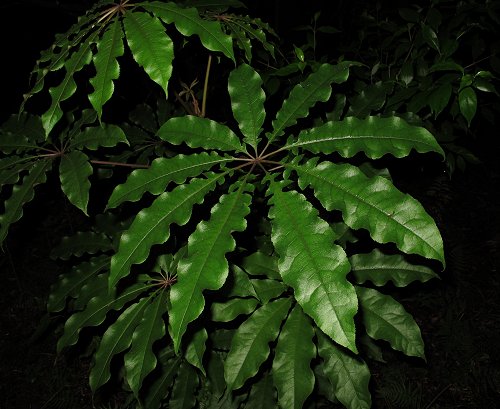 I believe this to be Pate, Schefflera digitata (pronounced Pah-teh, the eh like the e in egg).  The plants have become common in the reserve area in our Bush Flat Paddock.  They appear to grow anywhere there aren't cattle to eat them. 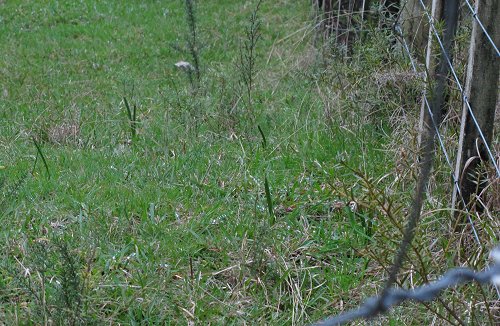 This is the top corner of the Mushroom 3 paddock.  Amongst the green grass you may see taller, darker upstanding leaves, which belong to Sun Orchid plants.  There are four plants in the open area and one more obscured by the Totara leaves in the bottom right corner of the photo.

In my orchid-fascinated lifetime I began by thinking orchids were quite rare and hard to find.  As I have become more familiar with their growing habits, I find they are all over the place and quite common, if you look for them. 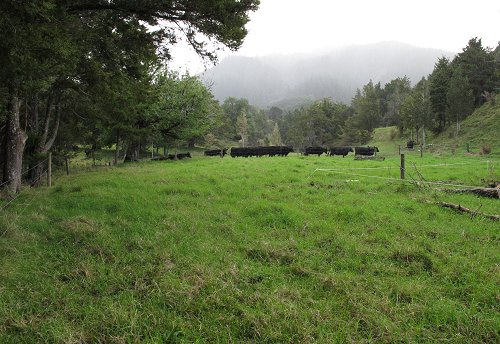 I went out to move the cows, and it immediately rained.  I waited under a Totara tree for a while for it to stop.  Afterwards the sun came out and the cows were all sparkly, with rain drops caught in their coats. 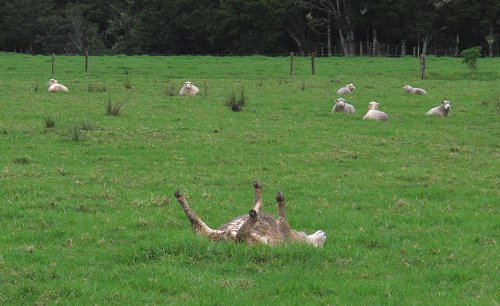 I've had to turn this sheep over nearly every day this week.  Hopefully we'll get some dry weather so we can shear them and she'll be less prone to getting stuck.  She's just a funny shaped sheep, I think. 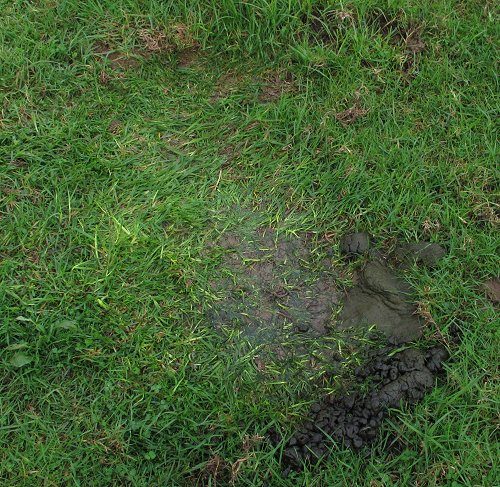 She'd been down for a little while this time.  They can't urinate while upside-down, but they can evacuate their bowels!  If you find a cast sheep with a whole lot of manure behind her, she's been down for a while.  This is not a great amount, but I suspect she's been lying here during some rather cold rain during the early part of the morning.