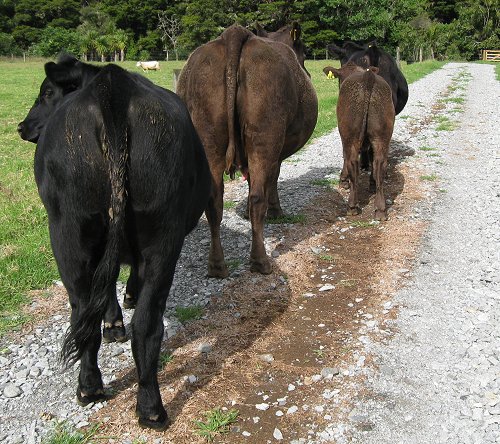 Our third afternoon walk to the yards with calf 647 for his injection.  He's looking much more comfortable again now, so the antibiotic is obviously helping him.  The muck around his rear is now dry, not wet and fresh, which indicates his faeces have firmed again and that he's not swishing his tail around in discomfort as he defecates. 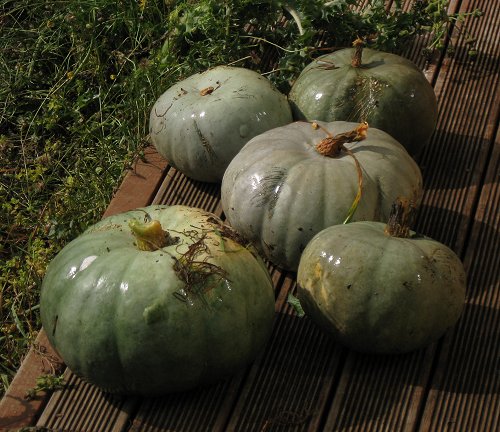 The crazy pumpkin vine has produced quite a lot of fruit and this is just a small portion of it.

Stephan says he will set up some sort of netting contraption to store the pumpkins in a dry place.  Pumpkin soup is a lovely winter treat! 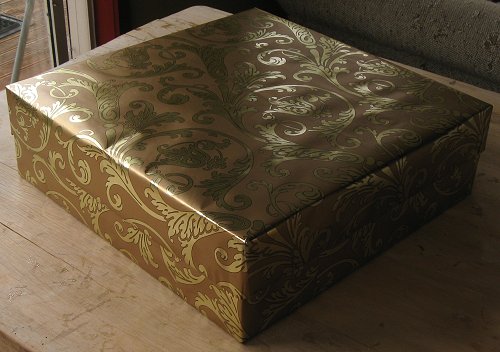 Today I added box-making to my skills.  I did not simply cover a box with pretty paper; I cut and pasted and taped a large quantity of cardboard into the correct shape and size, to make a box with a beautifully fitted lid, in which to place a gift for presentation to the departing CEO of Kaitaia Vets at a function this evening.

I never imagined that an extravagant gift from Jude to her daughter would have the spin-off of providing me with a useful box to recycle! 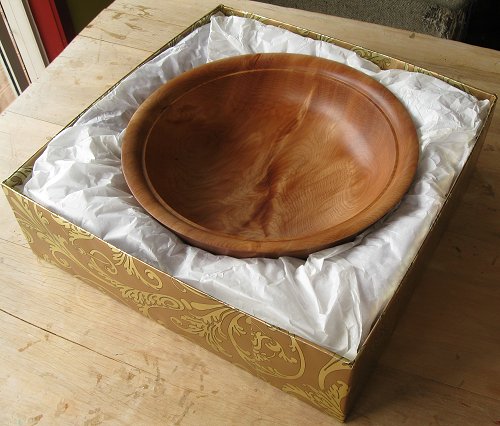 This is the stunning Kauri wood-turned bowl I found in Whangarei at Creative Kiwi Arts & Crafts, made by Granville Haworth.  Its form and grain were a delight to behold and I would happily have kept it myself, had my income been such that extravagance did not matter. 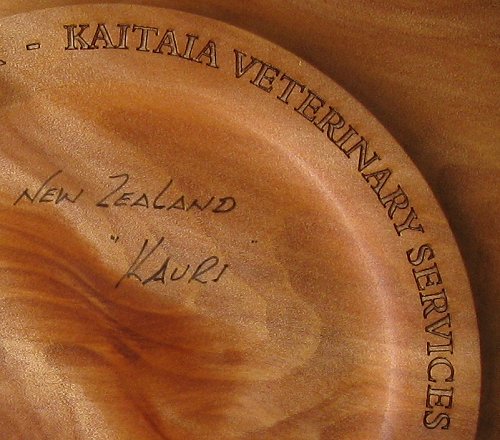 Julie and Mark at Creative Kiwi very helpfully took the bowl to Engraving Systems across the road and I arranged with a lovely woman named Rachel, to have the bottom of the bowl appropriately inscribed.  I was very happy with the finished effect and the bowl was presented from the Board and Members of Kaitaia Veterinary Services Inc. at this evening's function at Waipapakauri. 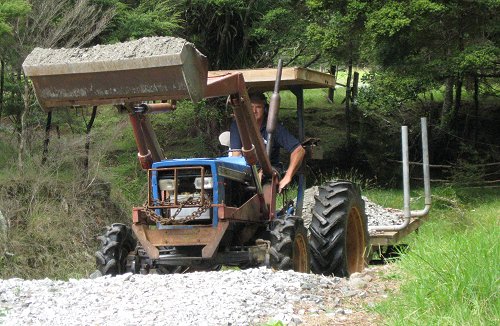 I suggested to Stephan that before the weather turns to its usual wetness, it would be a good idea to get some metal out to the culvert which leads from the Back Barn paddock to the Middle Back.  Over the last eighteen months or more I've been preventing the cattle having access to the crossing and working on the area by hand, filling in the holes in which water always gathered, and gradually smoothing the surface.  I've taken containers of river stones out on the back of the bike to help.  It has remained in this condition for a while now, with cattle only being allowed to cross it when the conditions are dry. 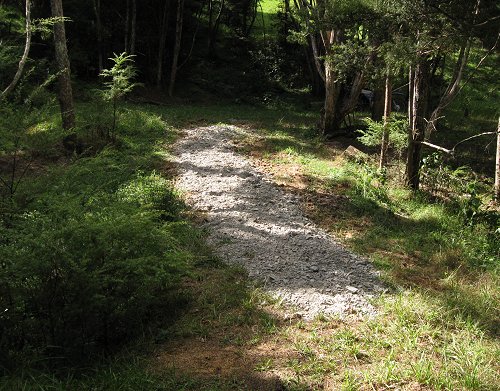 Now it looks like this, which will need a bit more work and a bit more metal, but we're on the way to getting it sorted at last.  I hope.  The biggest issue seemed to be that because the area is shaded by trees and the soil is sticky clay, any time the cattle walked through and the clay was soft, they left deep foot-holes.  The holes collected rain water which didn't drain or evaporate, so the next time they came through, the whole lot was churned into a slurry, with more water-filled holes and the situation continually worsened.

I started pushing the high spots into the holes so the area gradually dried out and every time the cattle had to cross the culvert, I went back and filled again, with lumps of clay or river stones, and so the water was excluded, the clay dried out, plants started to grow on the soil and stabilise it, and here we are with a surface Stephan hardly had to alter with the tractor before laying metal over the top. 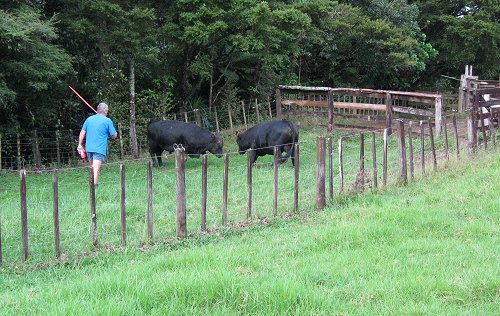 Virago Reality 89 AB is off to the works tomorrow.  This evening we brought the two bulls in from their paddock, sprayed some paint marks on 89's back and applied a Direct-to-Slaughter AHB tag to his ear - since he broke his official Primary ear-tag soon after weaning, he had to have another bar-coded tag applied to go to the works.

The bulls still move fairly well, but they're prone to pushing each other around.  The stick Stephan is holding is used for waving, not hitting, unless there's a safety-related need to remind a bull who's boss.  Cattle react well to visual cues, so that a stick waved in the air will usually get them heading in the required direction.

I forgot to take a tail hair sample from 89 last night, so had to put him up the race again this morning.  I have no particular concern about 89's genetics, but I have learnt my lessons over the last few years about ensuring I have a sample from each departing animal who leaves relatives here. 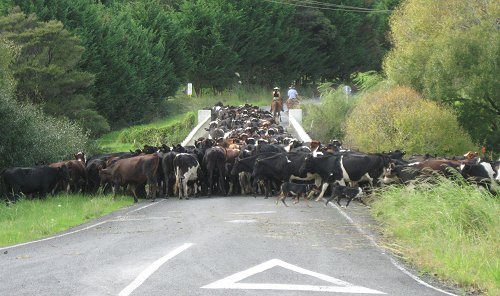 Just as the truck was leaving with the bull on board this morning, somebody went up the road warning that a mob of 300 cattle was on its way down past our place and that if the truckie didn't want to get stuck behind them, he'd better go.

We were due to go into town, so delayed our departure until we thought the cattle would have had enough time to pass.  As it turned out, our timing was perfect and the mob had just turned to go onto the Ruaroa Road bridge at the bottom of Diggers Valley Road as we got there.  There were lots of people ahead and behind the cattle and they were doing a nice job of moving them quietly along.  Fortunately we'd planned to take the left hand turn to town - one can go either way, one is shorter and unsealed and the other smoothly sealed all the way. 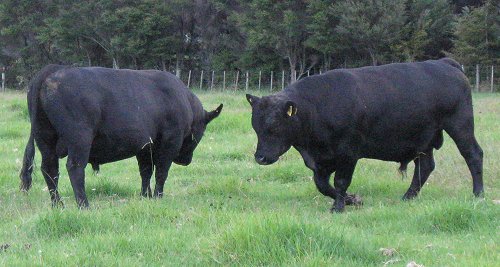 This evening I reintroduced 87 and 90 to each other.  They've been grazing in adjacent paddocks for a while in preparation, but there was no point mixing them until 89 had left.  89 and 90 are much more aggressive than 87 and I didn't want to put 87 in with two fighters!

You may recall there was a tremendous amount of fighting when I put 89 and 90 back together a few weeks ago.  But put a fighter with a non-aggressive companion and there's not much action.  The two of them sidled up to each other and did a bit of posturing, then they slowly put their heads together and pushed.  It didn't seem to come to anything though. 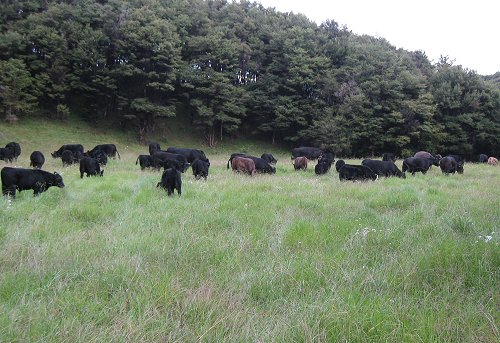 There's quite a bit of grass around for the cattle to catch up with!  This is a nice easy season to manage, with plenty for them all to eat. 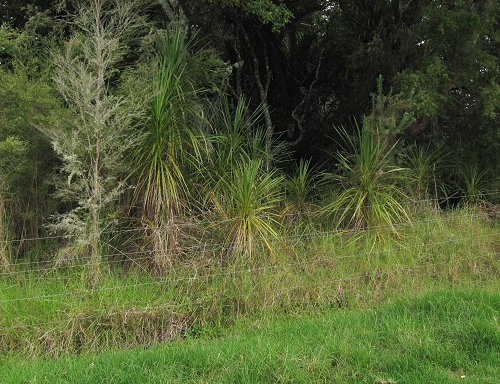 The water came over this bank from the river in the last big flood - this is the outside of a sharp bend.  I've noticed the Cabbage Tree seedlings here before, but they've taken a long time to get going.  The seeds may have been dropped by birds, but they probably fell from a very large old tree on the other side of the stream.  Perhaps the flood brought them enough water to really start growing.

The last two days have been dominated by Kaitaia Vets Board work.  As the long-standing CEO leaves to take up another opportunity elsewhere, we're busily making sure everything will continue to work well in the interim period until we appoint a replacement.  In ordinary times the Board has a strictly governance role, but for a short period we will have to be a little more involved in the day-to-day management of the business.  It is a very interesting time.