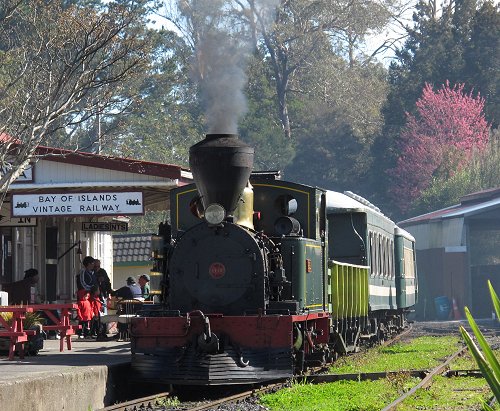 Yesterday Jill travelled back from Auckland on the bus, so we went down to meet her and stay with her on her first night home again after her weeks away in England.

Home again this morning, with a quick stop to look at the steam train in Kawakawa.  It's fun seeing it in operation.

Since we were travelling without urgency, we stopped in many places on our way so I could take photos I might one day use to illustrate magazine articles.  If I had more time, I might do a general scenes page in this site, but I don't. 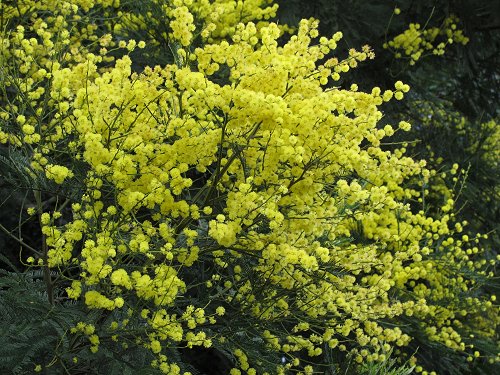 A noxious, although beautiful, weed: Wattle, an Australian immigrant.  They advertise their presence very clearly at this time of year, with their stunning displays of frothy yellow flowers.

The Middle Back Paddock on the left has a nice amount of grass growing in it, because I've been waiting for Stephan to finish his scrub-cutting and gully-filling job, which will make the paddock much safer for the cattle than it was.

The 26 cows are in the Big Back, where I was standing, but most were down the bottom in the sunshine.  I had walked all the way up the left side track to the farm's central ridge, then down the other side, eventually finding the six cows I was looking for, sitting in the sunshine without a care.  If I'd chosen to walk around the paddock in the other direction, I'd have found them within only a few minutes. 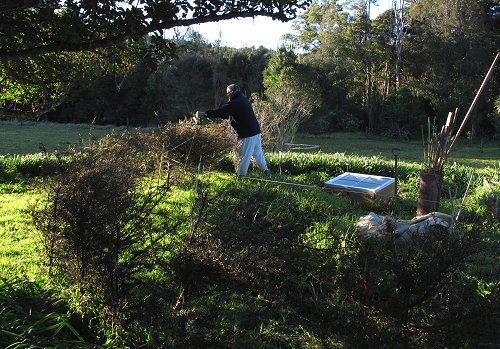 Stephan planted a circlet of Totara seedlings around the windward side of the vegetable garden some time ago, and we've been pruning them to the shape we wanted with secateurs.  Now they're big enough for him to do the job with a hedge-trimming machine! 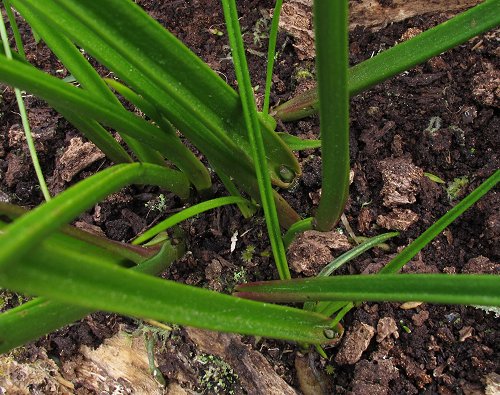 The sun orchid flower spikes are just beginning to show in the centres of the plants in the old Puriri log.  They're at about the same stage they were at the same time last year, but in 2009, they seem to have been a bit later.

I haven't worked out whether different sorts of seasons alter their flowering times to any significant degree.

This is the ovary of the second Anzybas rotundifolius I found, where the big pine tree used to stand. 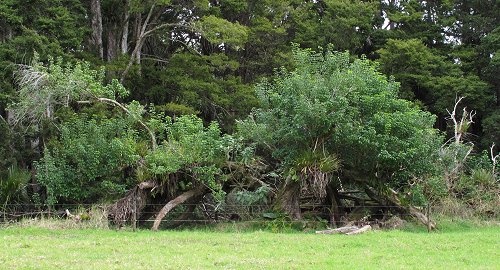 This is the Puriri tree which fell apart in 2007.  As is usual with Puriri, it has grown up again from anywhere it remained alive.  Its canopy of leaves is far smaller than the original tree's cover, but it's looking very healthy.

I set off early this morning to drive down to Warkworth, a little over three hours south.  Our ute's heater sprung a leak a week ago and so it was a very cold trip, even with a hot water bottle on my lap.

My destination was a Rural Women New Zealand (RWNZ) Leadership Seminar, held over three days.  I've been a member of RWNZ for many years, since joining the northland Women in Farming/Agribusiness group in 2003.  Apparently most of the members of that group did not remain with RWNZ after we disbanded, but my interest in the organisation was for its political and advocacy work as well as its local provision of group facilitation.

Most of the Warkworth participants were women older than 60, who had been branch members for years and saw opportunities for doing more within the organisation and their own communities.  There were five of us under 46, and the differences between the two groups were as fascinating as our commonalities.  Women are always so interesting!

There was a full programme of speakers, mostly women involved in community leadership of some sort.

The Leadership Seminar finished with lunch and I packed up and made my way north, with a wide detour out towards Mangawhai Heads.  I have never been there before, but it is where six of last year's heifers went to live, and I had arranged to see them.  Their new owners were not home, but I had good directions to find the right place. 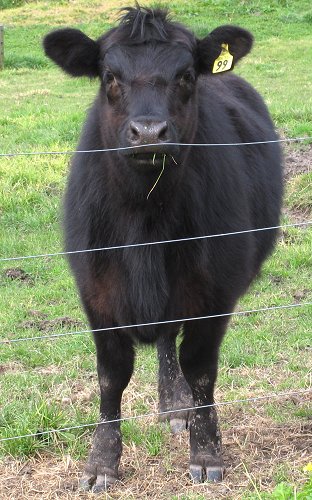 I always enjoy going to visit animals I've bred, to see how they've developed.  They obviously still remembered me; even 105, who wasn't very tame when she left but had begun to take Puriri from my hands, came up and licked my fingers when I extended them to her.

This is Abigail's daughter, one of the heifers I was quite sorry to see go!  She's a much better heifer than her elder full sister, Dinky 94.  But I enjoy sending good heifers away to people who will get similar enjoyment from breeding them. 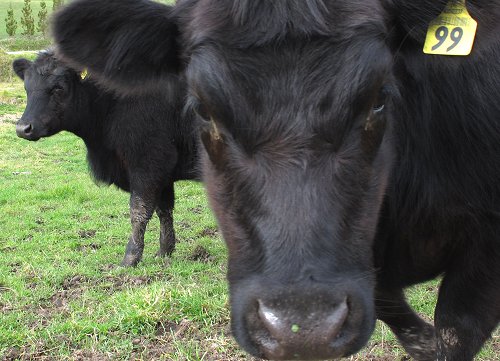 I knew this heifer would grow into a beauty.  Her elder sisters are 658 (mother of last year's twins) and 611, both animals I like. 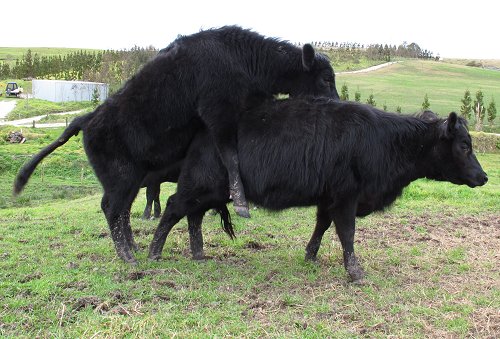 I've had a niggling concern for several months about 99, but her behaviour today allayed my fears.  Abigail and 99 spent longer with Imagen and her huge son than they probably should have.  I was reasonably confident that the bull calf would not be fertile but I had asked 99's new owners to look out for this indicator of her lack of pregnancy.

99 is the one on heat, standing still while the other heifer mounts her.

When I got back in the ute and drove slowly away, the heifers all bounded along the fenceline, calling out.  I often wonder what animals think.  I have no doubt at all that they do, although naturally entirely differently from our own language-based idea of thought.  Maybe they were as pleased to see me as I to see them! 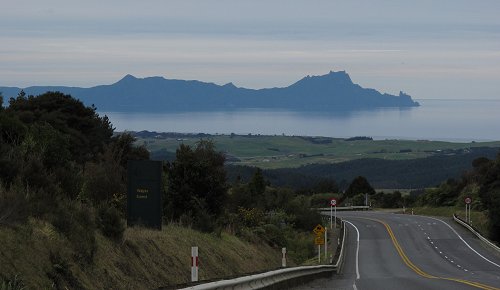 I had no map for the area, so wasn't quite sure of the best way back to the main road, but carried on along the road I was on and emerged at Kaiwaka.

Coming over the top of the Brynderwyn Hills, Bream Bay was still, and as there was little traffic around I stopped to take some pictures.

I arrived at Jill's place in Whangarei and as I had no pressing reason to continue on my way home, stopped to stay the night with her.  She pretended to have been expecting me, although I knew she wasn't.  I discovered a new word, when doing some reading recently about dementia: confabulation.  I thought it was a joke, but apparently that's the term for the thing people do when they have no recollection of something they know they are supposed to know, so they make things up.  The human mind is fascinating!