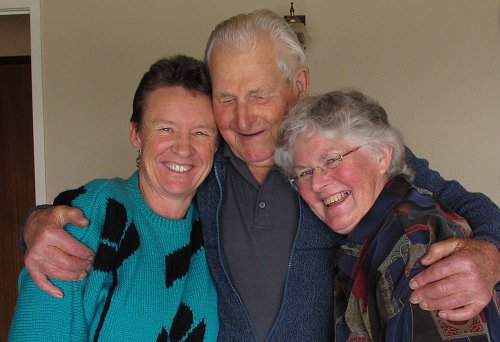 We went to a family party, for my Godfather Hack's 90th Birthday.  I enjoyed meeting some members of his wider family with whose names I've been long familiar, but whom I'd never met in person.

Here am I with Hack and Janet, another of his Goddaughters.

Godparents can be special people with special place in a life.  I'm glad I came from a generation of parents for whom that part of their Christian tradition was important, because without that early contract by my Godparents, I might not have claimed the same relationship with them as I have within that framework.  While the explicitly Christian aspect has not been an active part of our relationship, nurturing, caring and the sort of unconditional love one possibly finds in a parental relationship always have.  I've been very fortunate. 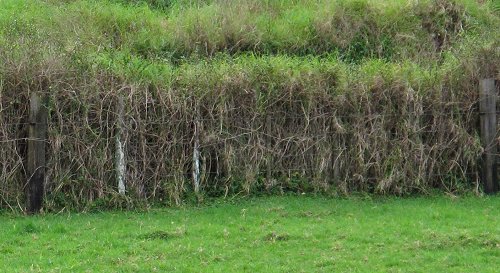 I spotted this fence as we drove away from the party.  This side is pasture and grazed, but the other side is along the road, where no animals eat the grass.  This is typical Kikuyu grass behaviour. 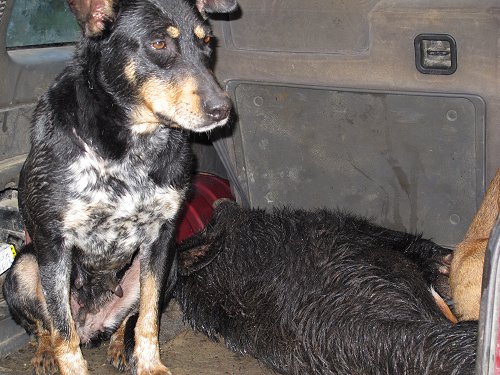 A couple of pig-hunters came out for a hunt this morning and within a couple of hours were back with grins all over their faces and a large pig to take home with them.

I was unfortunately too late to capture them carrying the pig and didn't like to ask them to pick it up again to pose.

The dogs all had GPS collars, which should be encouraged.  Too many hunters lose track of their dogs and leave them out in the bush unsupervised, until they wander out on their own - or don't. 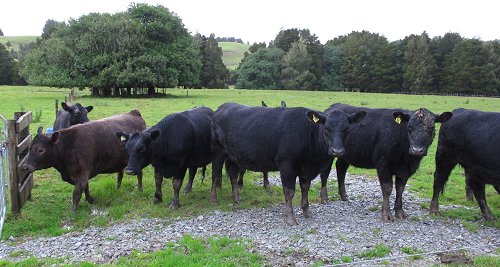 It was a cold, rainy day.

Now the sold bull has gone, I moved and mixed the others: the two R2 bulls from Flat 2 and the three R1s from Flat 1.  Little bulls don't dare to challenge big bulls, and the big bulls don't see the little bulls as any threat to their supremacy, so this sort of mixing is a fairly gentle process.

Once the bulls were in their paddock, I moved these ten heifers to their next one too.  Cattle movements are best done with awareness of how the animals will move in relation to each other.  If I'd moved the heifers first, they'd then have been in the neighbouring paddock to the one the big bulls were in, so the big bulls wouldn't have come out.  Keeping the heifers waiting brought them to their gate, which drew the bulls along the lane to the right gateway.  Maybe if one has a dog, such planning isn't as necessary, but I'd rather draw cattle in the direction I want them to move than have to propel them with threat and noise.

Today was extremely cold, with rain and hail: all very unpleasant.  The forecasts had even suggested the possibility of snow showers on Northland ranges, as far north as Whangarei!  The day's maximum temperature was a very chilly 9½°C.  I checked the long-term records to see if it normally gets this cold, and found that such cold days do happen from time to time in June and July.  This year we've been spoilt by very mild temperatures, so this cold spell really does feel bitter. 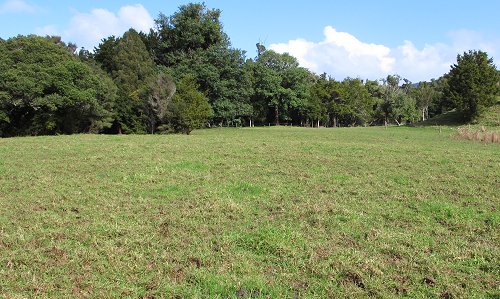 The Bush Flat paddock isn't particularly large, so I went out to see whether the heifers needed moving.  My sense is that all the animals are eating their grass very quickly, but it's probably more that the grass isn't growing much at all, and it has only recently stopped growing with the cold weather, so the change has been very quick.

The heifers took some convincing to move, but after a while they all came to the gate into the Big Back paddock - around the corner in the distance in this photo - and put their noses down to fresh feed. 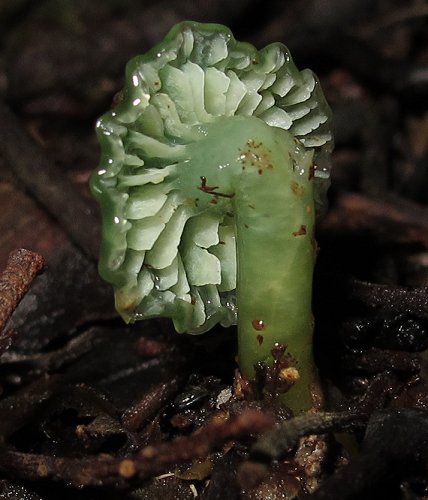 I found this weird jelly-like little fungus near the orchids this afternoon, as I walked into the bush by a slightly different path.  There were quite a few of them around - quite tiny and difficult to spot, and obviously about as sloppy and soft as they look.

It looks like something may have chewed on the stem of this one, causing its top to slump.  It is probably Gliophorus viridis. 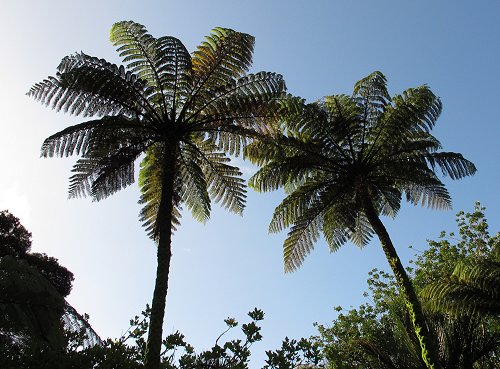 The sun was playing on these tree ferns which grow along the edges of the road.  Many of them have wonderful looking mosses and other epiphytic plants growing up their trunks; often other ferns, and lots of the little yellow orchid plants find a good home there too.

Our water went off in the flooding the other night, and so for the first time we had to rely on the big new tank.  We even switched the taps so it would fill the troughs around the flats as well, although the cattle don't drink very much at this time of year.  By today things had dried out enough for Stephan to venture up into the bush to see what had gone wrong - nothing serious, just too much water washing things out of position. 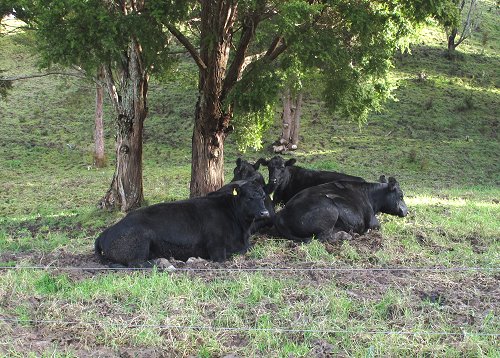 The cows are in the PW and they've eaten most of the grass, so I moved them.

When I arrived these four were sitting together.  I'm not sure of the identity of the cow closest to the tree, but the other three are Demelza at the back, her mother Abigail to the right, and in the foreground is lovely Eva, Demelza's daughter.

I checked on Demelza's rear and was surprised not to see any pink flesh protruding from her vulva.  It is quite possible that its appearance depends on how much grass she's eaten and it's likely she's not as full in this paddock as she was in the weeks when the cows were grazing the overgrown hill over the road.  But I also noticed that there was a lot of crusty dry stuff on her tail, more than I'd have expected to see by now and I wondered if something happened to cause the swollen mass to empty?  Demelza seems well enough. 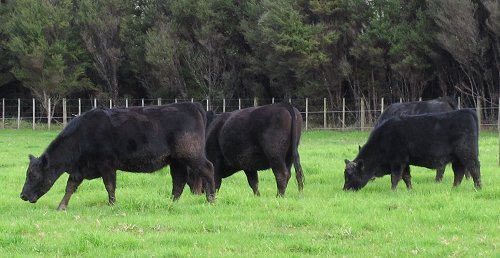 It is unusual and very nice to have grass like this for the heifers at this stage of the winter.  I'm pleased with their condition so far, all of them continuing to look about the same, which means they're getting enough food to satisfy their growth needs as well as their bodily maintenance.

The cows can be allowed to lose a bit of condition over winter, but pregnant young stock must not.  Eva 81 (in the previous picture) is the odd animal this year, being the only R3 first-calver.  She was well up to mating weight in the summer of her first mating season, but her earlier accident appeared to have affected her general well-being and she failed to get in calf.  Her growth from then on was good and she reached a hefty 570kg by mating the next year.  Since then she's tipped over 600kg and was getting noticeably fat, so when I weaned the cows and calves Eva stayed with the weaned, reduced-intake cows, rather than the youngsters.  She remains with the cows.

Last year I kept the R3 first-time calvers with the cows through the winter, only separating them for better feed provision late in their pregnancies.  This year, with a milder start to winter and a still-reduced herd, Eva is probably getting enough to eat with the cows, and she won't come out of that mob until she's due to calve.  At this stage she's still in very good condition and I don't want her too fat for her first calving.

The other R3 heifers are all pregnant for the second time (except for Damara 74, who slipped her calf earlier in the year) and they form a mob of ten animals, with Squiggles, who's a year older, but always behind by a year.

These are the cheeses Stephan began making a couple of weeks ago, now with their characteristic outer mould.  The left one has just been turned over, a regular part of the maturation process.

Today I spent many hours learning about databases which run some types of websites.  I didn't set out to do such a thing, but when I did something tricky to the discussion board I set up for Stella, I broke it!  So before the half a dozen girls and various other people noticed it was not there, I had to fix it, and it took me several hours.  Fortunately I worked out how to restore all of the material which had been there before.  I think I'll leave it alone now.

Lucky I didn't have anything really urgent to do today!

Today was GST day: Goods and Services Tax, for which we and the farm are registered.  That means that for every expense we incur in carrying out our farming, trapping, writing and related business, we can claim back the GST portion of our payments.  But we also have to pay to the government all the GST we collect on our various sales and incomes - all animal sales, contract income, and so on.  Every two months I have to account for the income and expenditure and calculate the GST, so that I either pay the balance to the government, or claim it back from them.  Some people do this monthly, others six-monthly.  We've always been on a two-monthly return cycle, which suits well enough, as long as I remember the return is due!  Today I spent a few hours tidying up and reconciling the accounts, which generally means some careful excavation of piles of paperwork I've left waiting to be sorted.

I spent most of the day keeping an eye on the sky, trying to work out when it would be safe to put some drench on the bulls.  I eventually got them in, but the clouds were gathering, so I left them in the Pig Paddock near the yards, hoping to do them tomorrow, if the weather looks more certain.

The bulls have all lost some condition; I have not been feeding them well enough.  They're not suffering great deprivation, but they're obviously not doing as well as the heifers during this winter.  A drench for their intestinal parasites will help, and then I'll have to keep a closer eye on their feed levels.

Mike and Chantelle came out for an overnight visit, and brought our dinner with them!  They'd invited us to go to visit them, but as it was the last Friday of the school holidays, we suggested they might like to repeat their adult-only mini-holiday away from the responsibilities of parenthood, and come to us again.