The week beginning the 24th of December 2011.
Saturday the 24th
Christmas Eve 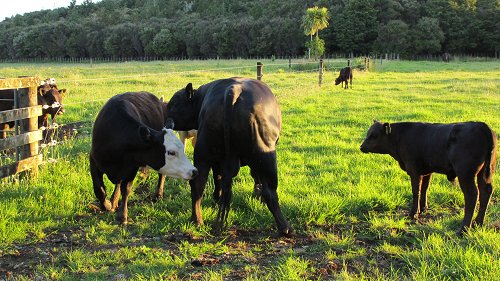 Today was the day I'd planned as the start of mating for the cows.  I brought some of the straggly small groups in and coppered those which hadn't been done before and gradually sorted them into two mobs for the two big bulls.

Yearling 660 was on heat and as soon as I put her into the paddock with the bull, he found her and the action began.

I watched for a while and noted that he was quite careful with her, which is a good thing to see in a bull.  A "wham, bam, thank you ma'am" approach can lead to injury for either party! 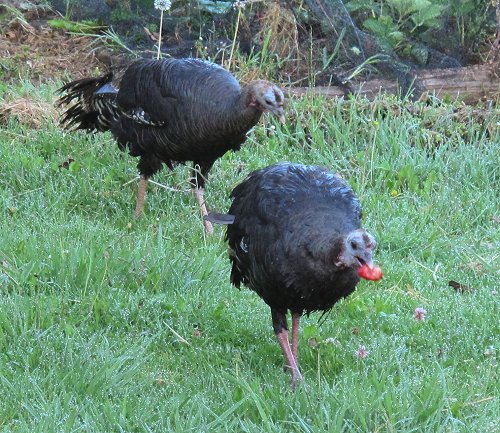 This is the most foolhardy turkey behaviour I've ever seen:
stealing strawberries from the garden on Christmas morning! 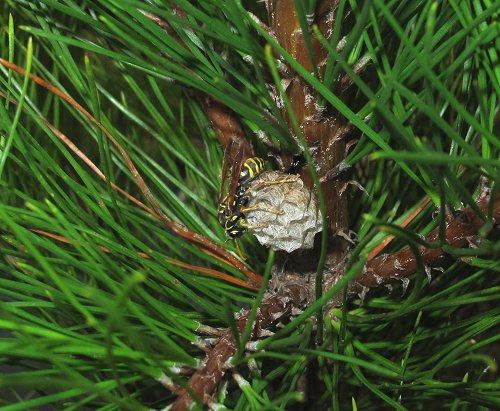 I wasn't going to bother getting the Christmas tree in, but then changed my mind.  I was stringing the little lights around it when I fortunately noticed this wasp just before I accidentally touched it.  It was evicted in short order and tree decoration recommenced.

The tree is one of the pine trees I accidentally grew from some seeds I thought were something else. 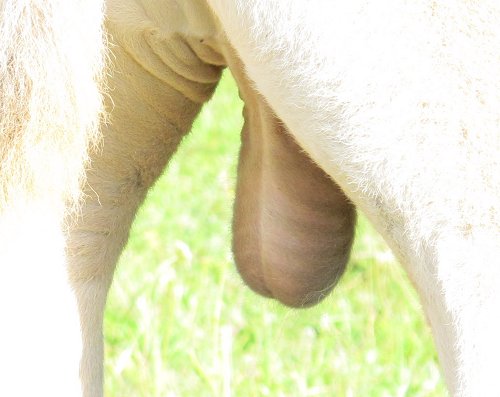 The prettiest scrotum I've ever seen.  Look at that beautiful striping!

Sadly it will have to go, but I thought I'd record it while still in its natural form. 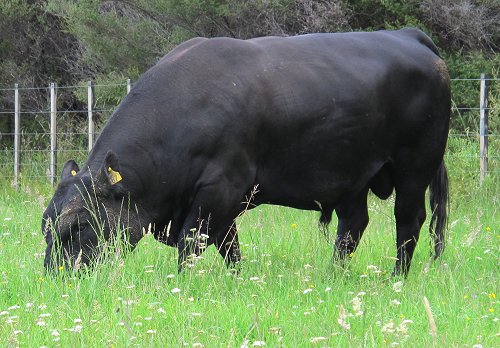 I've always found bulls intriguing.  That testosterone takes everything to an extreme not seen in the female of the same species, fascinates me.  Their necks and heads get so huge and heavy and they simply ripple with muscle when they move. 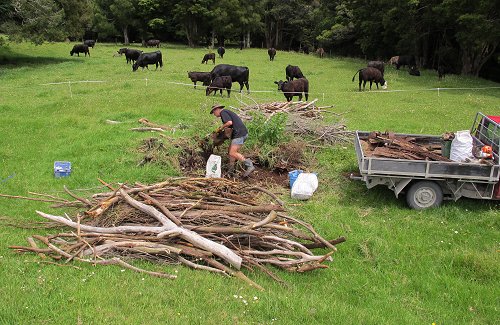 On most farms you'll still find rubbish piles.  Farmers used to creat their own land-fill sites for convenience, but without modern awareness of the risks of leaching into waterways.  On our land, there's the added complication of the way the land moves where water runs underground.

In our Windmill Paddock there is such a site.  At the time the rubbish was buried, it was viewed as a great opportunity both to get rid of some old rubbish which couldn't be recycled and to fill a hole which could create a stock hazard.

When some of the rubbish began to poke up out of the ground again, I suggested that we dispose of it in a more responsible manner, so today we began removing it from that site.  There's all sorts of stuff there, from an old car body to a broken television set.  Unbroken bottles and scrap steel are recyclable, but the rest will need to go to a legitimate land-fill resting place.  The prunings from Totara trees had been piled on top in an attempt to keep the animals from harm, but even that didn't always work.

It'll take some time to sort out, so in the mean time I will put electric tape around the area to keep the animals out of danger. 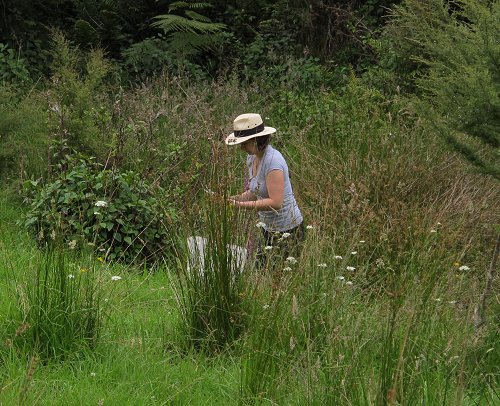 Miriam and Simon came out, as they often do on Boxing Day, although usually for a social gathering.  The four of us went walking with bags and cutting implements and made an assault on the Ragwort population in the Big Back Paddock. 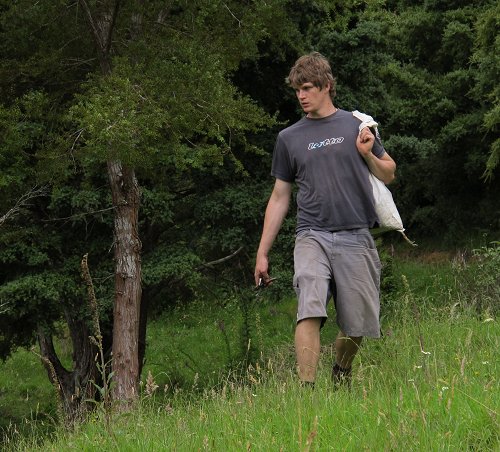 No Ragwort plant is safe when Simon's on the job! 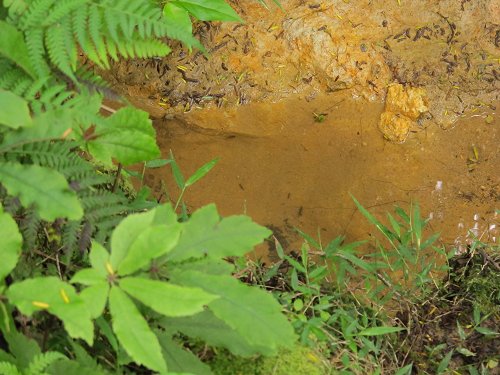 I was clambering along through the gullies on the northern slope and came across this little water-course. 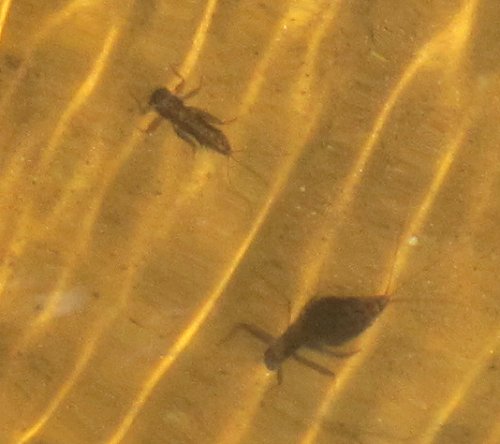 I don't know what sort of insects these nymphs might turn into, but they were a lively lot.

The bright stripes are the result of using the camera's flash and catching the ripples caused by the water trickling into the pool from up the hill. 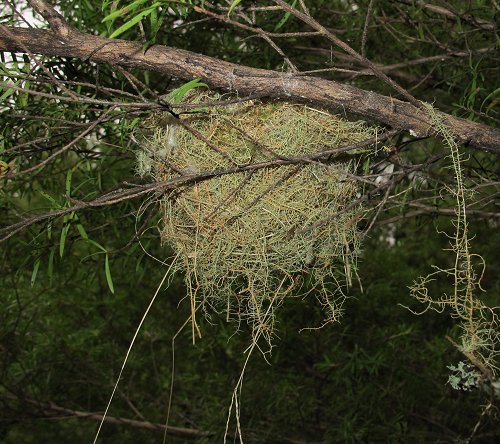 At just above my head-height, this tiny nest was held by the outer slender branches and twigs of a Manuka tree.

Its diameter was about four inches.  I haven't been able to find a matching description to identify the builder. 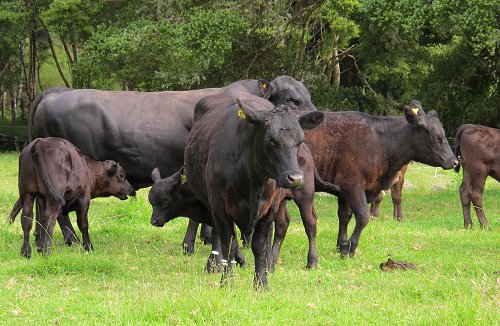 I check on the stock several times each day, looking out for indications of mating interest between cows and the bulls.

Today #90 was definitely interested in heifer Dexie 101, although she looks a bit nervous of his attentions!

Noting definite mating dates allows me to closely predict calving times in the Spring, which makes my life and farm management far easier than otherwise.

Eva is facing the camera. 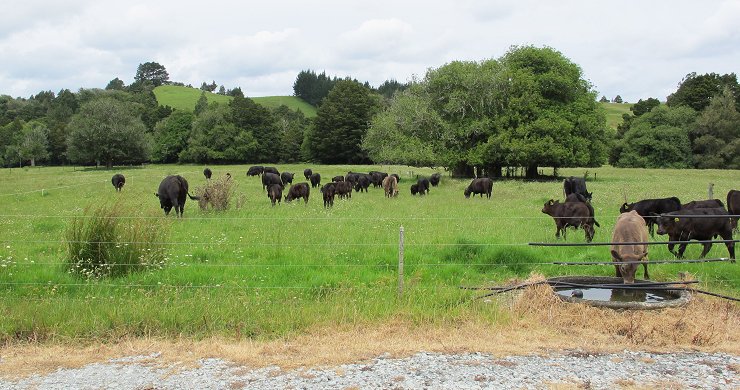 The abundance of grass and its ongoing excellent growth is making managing this mating season a breeze.  I'll be able to keep both bulls' mobs on the flats for an extended period, which means my observations are more constant because I can see indications of activity from the house for much of the time. 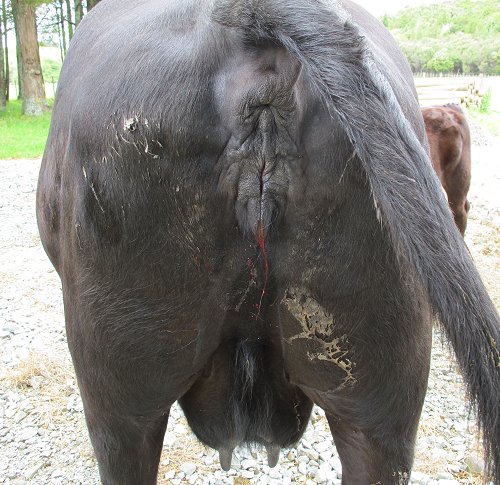 I watched #90 serve Queenly 23 this afternoon, but was concerned to see blood in her mucous afterwards.  With Stephan's help I drafted her and her calf out of the mob - a bit of a tricky thing to do when there's a thundering great bull with "intentions" very keen on going with her - and left her to rest quietly in the shade in the lane for a while.

Later in the day I took her down the lane and into the paddock from the other end, so she's still near the others, but not with them for the time being.  When she passes her heat phase, I'll put her back with the others.  She probably just has a vaginal graze, but I don't want to risk her being injured any more.  Hopefully she'll be in calf and not have to go through the whole mating process again until next year. 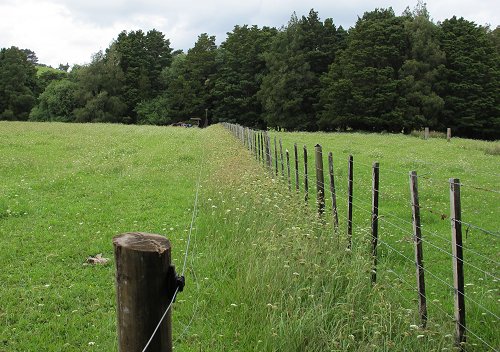 Stephan spent a few hours over on our boundary with the ten-acre neighbours, erecting a two-wire electric fence inside our boundary to prevent our cattle having direct contact with theirs.  There are two issues which arise on this boundary: the first is that the neighbours periodically bring in new calves and there is always the risk of their carrying BVD; the second that some of those calves aren't castrated and so there is sometimes a young bull on the boundary and since I occasionally need to run one of mine along there too, I need to ensure a safe barrier between the two properties.  There's already an electric wire along the top of the fence, and another lower down, but cattle can still get quite close to each other if they are careful.  I've had an electric tape along the fence for months, but my calves would often go under it and be closer to the neighbouring cattle than I wished. 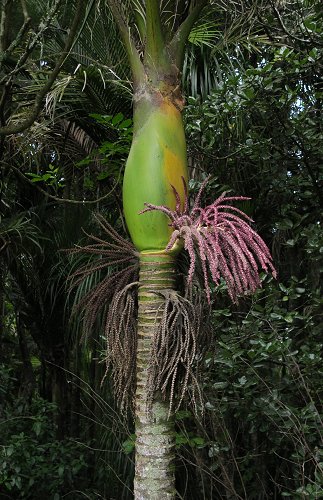 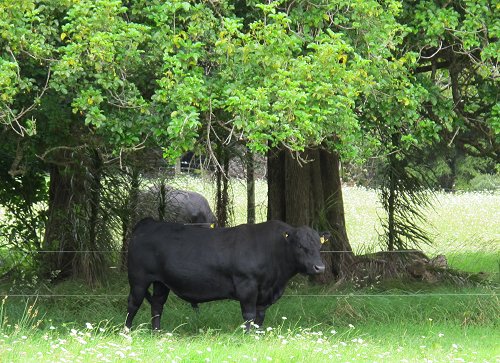 Bull #87 seemed to be spending quite a lot of time standing around in the shade, despite some obvious heat behaviour in a couple of his cows.  I had a careful look at him, checking for any penile swellings or lameness, but there didn't appear to be any problem.  It occurs to me that I've seldom seen him doing anything with the cows at all.  He's one of those shy bulls which do most of their work when nobody's looking!

A few minutes later he did go out and pursue one of the hot cows for a little while.  I think he does what he needs to, then goes and has a rest.  The cows presumably benefit from that approach, in that they're not continually hassled by the bull when he's already done what is necessary and less stress probably leads to better conception rates. 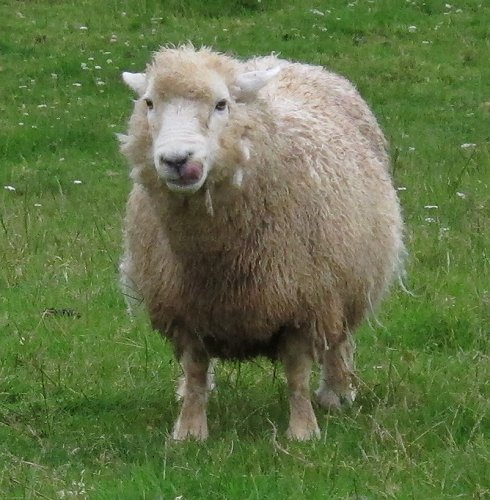 Lamb, beginning to look a bit bedraggled.  She had no lambs this year, since she's unable to produce milk in her mastitis-damaged udder.  She'll continue to live out her life here until she succumbs to infirmity, at which point we'll end it for her.  I've heard several people recently talking about letting animals live out their natural lives and die "naturally".  That horrifies me.  "Natural" dying is, in my experience, usually extremely unpleasant, following a period of suffering through whatever it is which brings the individual to that end.

I have regular discussions on Euthanasia with others who are involved with the care of animals and naturally the conversation ranges onto human Euthanasia, because we always end up talking about how we are legally obliged to humanely end the suffering of animals, but legally prevented from doing the same for people.

It's obviously a fraught issue for some, but having watched a small number of people through the painful process of disease-related death and had to make the decision on behalf of a number of animals in my care - and on a couple of occasions not made a timely decision - my own feelings on the issue have become quite clear.  I keep seeing a Listener advertisement for the Voluntary Euthanasia Society of New Zealand and have at last followed up my oft-stated intention to join the organisation and taken a life membership. 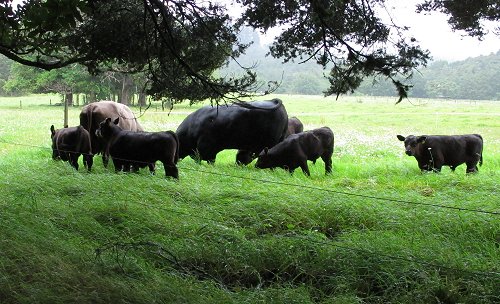 I had a very cross morning.  539 had gone through the tape in Flat 4 and wouldn't go back where I wanted her - in all that long grass, why would she?  (Later I worked out that she would have been pushed through the tape, so hadn't been the badly behaved animal I first suspected.)  Sometimes I work myself into a ridiculous state and on this occasion the cows knew it and as I approached her, young 611 kicked back at me!  (My cows hardly ever kick and those who do don't stay here for long.)  It's not enough to behave calmly around cows, you also have to be feeling calm.

Then it rained.  Actually it poured, for several minutes.  I sheltered under a large Totara tree and waited for it to clear and while there, this group drifted over toward me: Curly, on heat, with a retinue of seven little bull calves, and #87.  The male calves are mostly in this mob and they've been hassling the bull constantly; they're also an excellent indicator, for me, of any cow who's on heat, even if the bull isn't taking much notice at the time I'm looking.

Weatherwise this is a very odd summer.  As grass-growers we're very happy that the spring drought didn't continue, but as summer-lovers, we're a bit fed up with all the rain!  After commenting on the 15th that we never complain about rain at this time of year, I'd like to modify that and say that we do when it doesn't stop!  However it's still far better being able to shift fat cows and fast-growing calves into paddocks full of grass than it is to be watching thinning cows on little feed and contemplating how soon we'll have to wean the calves!