The week beginning the 24th of September 2011.
Saturday the 24th 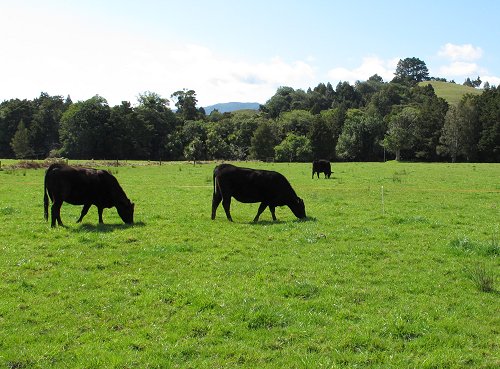 The four heifers are making their way down the Flat 2 paddock and today I called Squiggles over and let her through the tape before I set up the next break, so she has the rest of the paddock to herself for the morning.  She can eat for as long as she wishes to, and this afternoon I'll pull her back in with the others for the night.  She, like Imagen and skinny 545, is getting a few handsful of feed nuts with her nightly molasses and Magnesium.  Imagen is looking better than she did, but the other two aren't particularly altered. 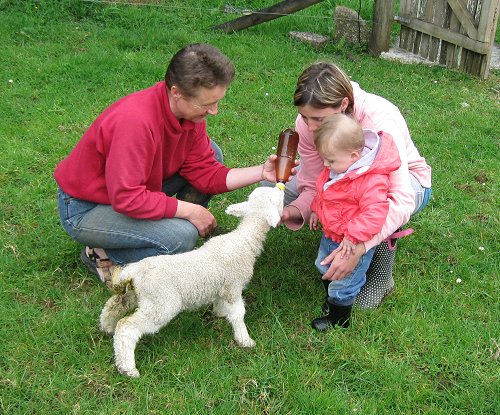 A very young visitor came for her first farm animal experience this morning.  Lola had never before seen a lamb.

Daylight Saving began this morning, so I could leave getting up to check things for an extra hour on the clock, although it made no difference to how much sleep I didn't get.  (I've been checking on the cows and heifers last thing at night, just in case.)

I moved the cows back from over the road and observed that 548 is another cow with udder development more advanced than expected.  I'll watch how things go over the next few days.

At around dusk this evening, both Stephan and I started feeling feverish and snuffly.  It's about 76 hours since we were both at the AGM on Thursday, the only place we've been together where we might have been simultaneously exposed to someone with a wandering cold virus.  Oh joy.

A few weeks ago I booked an appointment for today, thinking it would fall nicely between the end of lambing and the start of calving.  This morning 545 was standing looking pensive, and her udder was very hard.  I had to go, leaving Stephan with instructions to check on the pregnant cows regularly - between snoozing in bed with what had developed for both of us, into an unpleasant head-cold. 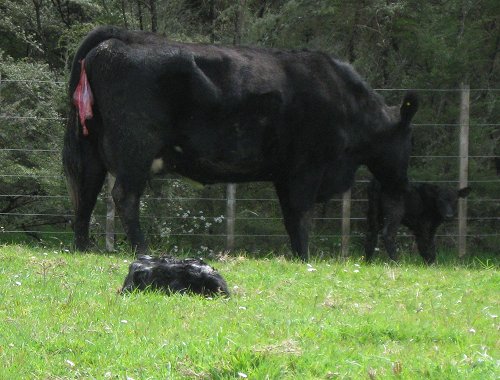 Between one and two o'clock 545 produced these two calves!  She did it, Stephan said, between checks.  I didn't hear about them until I phoned home a bit later in the day, but was very pleased to hear she'd calved both successfully.  Twins are more likely than singles to present for birth incorrectly, and some cows get confused and refuse to acknowledge one or both calves. 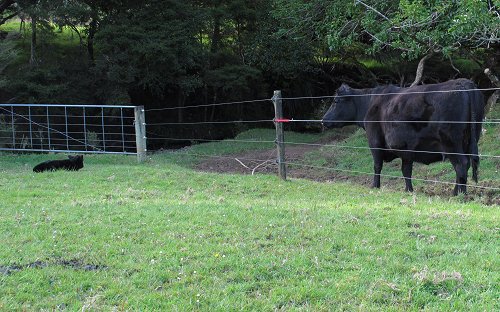 Before I left this morning, I asked Stephan to please remove Athena 72 (and 571 for company) from the paddock she shared with 545.  Last year Athena caused significant distress to 548 and confusion for 548's new calf immediately after its birth, and if she behaved the same this year with a cow with twins, she could really cause chaos.

Athena did behave in the same way (on the other side of a fence) and Stephan was very grateful I'd suggested the move!  Here she is, intensely interested in one of the calves as it sleeps in the corner of the paddock.  (She can't go beyond the red thing in front of her nose, which is the insulated handle of the electric tape in her bit of the Camp Paddock.)  This sort of behaviour is a cullable offence, except that knowing about it in advance this year has meant I can manage it with reasonable ease.  I'll just have to make sure that any other animal in Athena's paddock is due to calve after her.  Last year she was alright once she had her own calf. 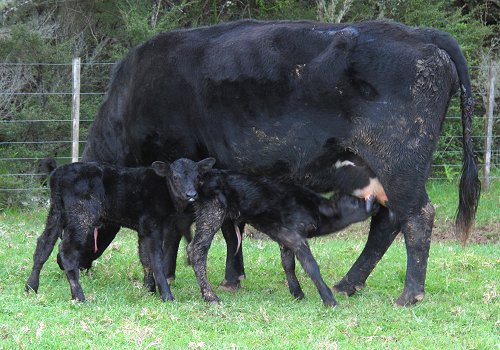 As soon as I arrived home I went out to have a look at the calves!  Stephan hadn't determined their sexes, since 545 wasn't very comfortable about him being nearby.  Both are heifers, which makes things easy.  The concern with twins (yet another concern) is that if they are one of each sex, the female has a greater than 90% chance of being infertile, called Freemartinism.  In cattle, during gestation most twins share their blood supply.  The development of the male's sexual organs occurs slightly before that of the female's, and his hormone production then inhibits normal development in his sister. 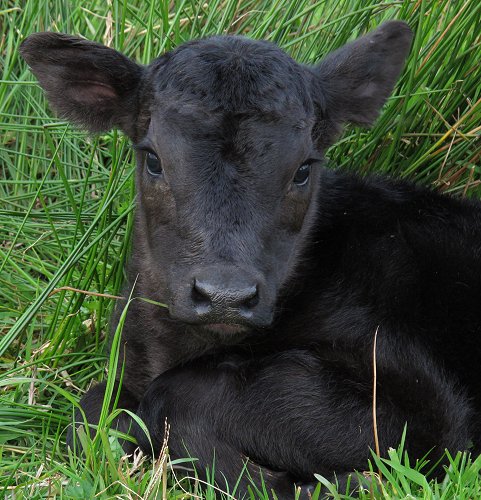 What a gorgeous face!  The twins were born on day 269 of their gestation, nine days earlier than their mother would normally calve.  They're very dainty, tiny calves.  I estimate that they weigh no more than 20kg each. 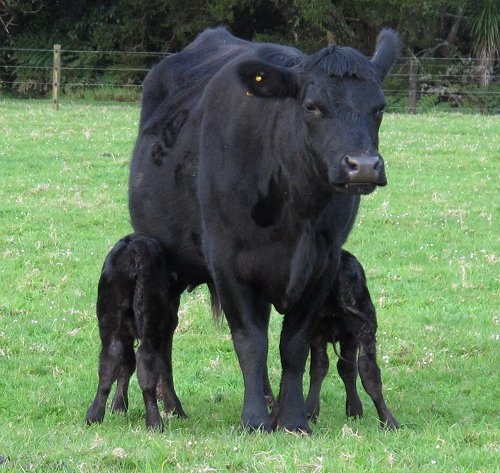 545 appears to be mothering both daughters well.  I watched for a while this morning, concerned that she appeared to be pushing one away, but eventually they settled down to feed.  The calves were some distance from each other early this morning, but 545 knew exactly where each was and that she needed two of them.  Cows can be pretty clever. 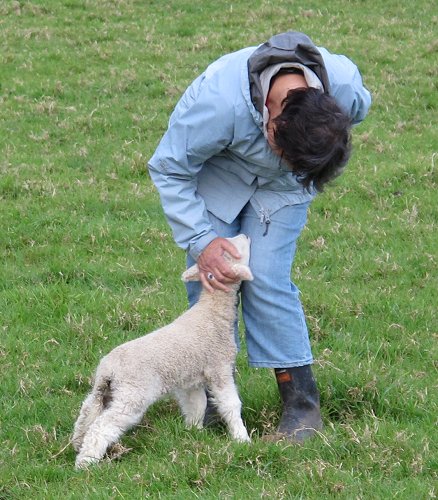 Jill wandered out toward me this evening, and as she crossed the House Paddock, was accosted by a small hungry woolly creature!

Some of the lambs are limping, not because they have navel ill (joint infections developed as a result of bacteria entering their systems at or soon after birth via the navel), but because of fungal scald between their toes!  I managed to catch Dotty's son this morning as he hobbled around, and carried him back to the house for some iodine sprayed between his toes.  He was a hefty little body, already, and more than a head-cold sick person should have been carrying around!  We'll have to get the others into a pen at some point and treat all affected feet.  Iodine usually solves the problem quite quickly. 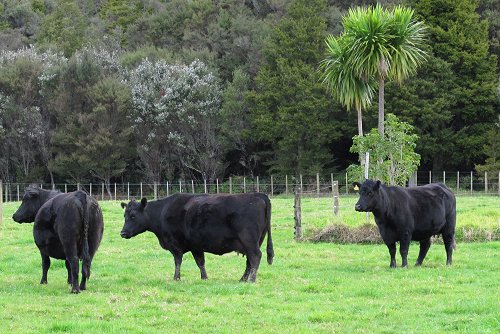 The cows get re-sorted quite a bit at this time of year, as I work out who's closest to calving, but also have to manage the only slowly increasing feed on the flats.  I leave the cows in the main mob grazing the back of the farm for as long as possible, before drafting them into smaller mobs on the flats.

Today I brought Eva 81 and 579 to join Athena, while 571 goes back to the calving group.  I think these two will both calve after Athena. 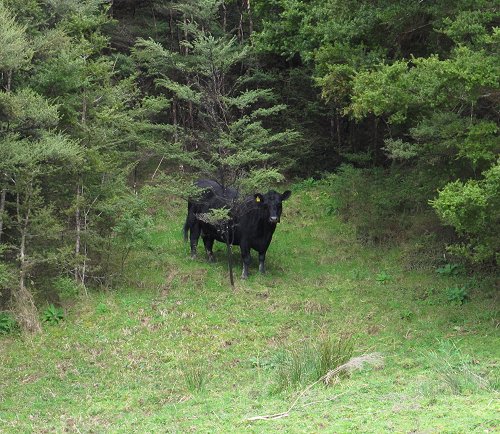 The main mob have spent a couple of days in the Camp paddock and this morning 16 of the 17 were standing or sitting quietly near the gate.  After checking them all, I worked out it was 456 who wasn't there, so went off to find her.

She was standing on the hillside at the edge of the trees, looking as if there was something not quite right.  She didn't seem to want to go anywhere. 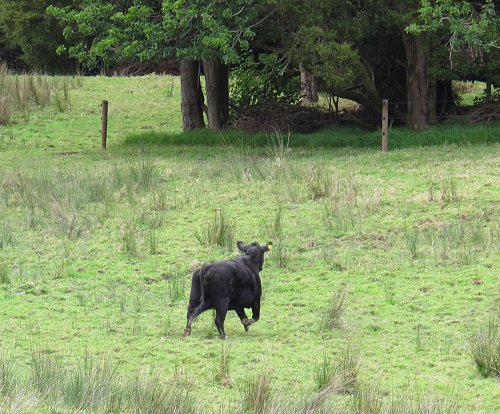 But there was nothing wrong.
I suspect she was just off grazing by herself when the others wandered away, and she was then disconcerted to find herself alone.  She went off in quite a hurry to find her friends.

At noon 548 started walking around with her tail held slightly out from her body, swishing it in an irritated manner.  Just after 2pm she pushed a big fluid-filled bag out.  Then this foot appeared, looking rather like it was up the wrong way. 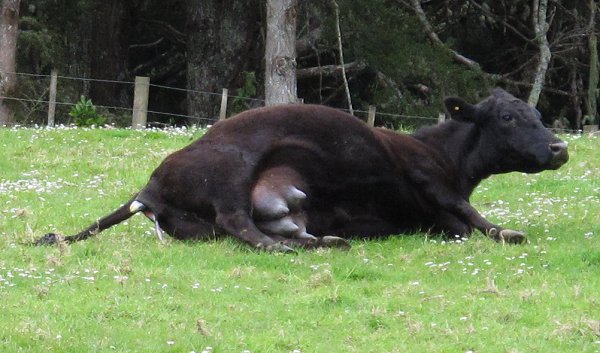 But the appearance of a second foot at a different angle, and held slightly back from the first, reassured me.  Front legs can twist quite freely; back legs, attached quite differently, can't move nearly as much. 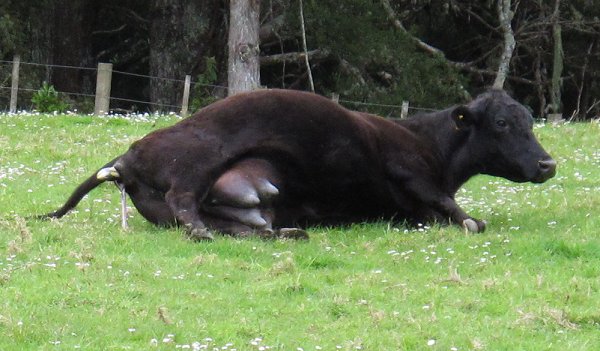 When she stood up, the first foot's angle looked much better. 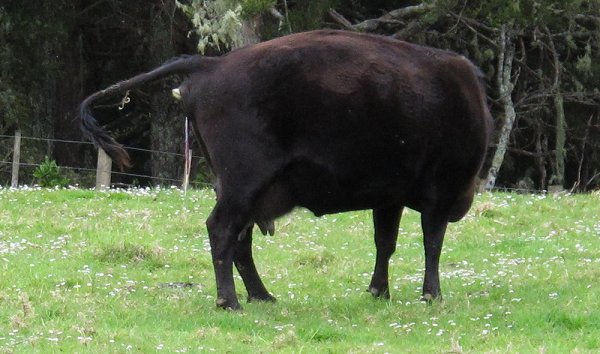 The appearance of the nose was the confirmation I needed that the calf's presentation was correct. 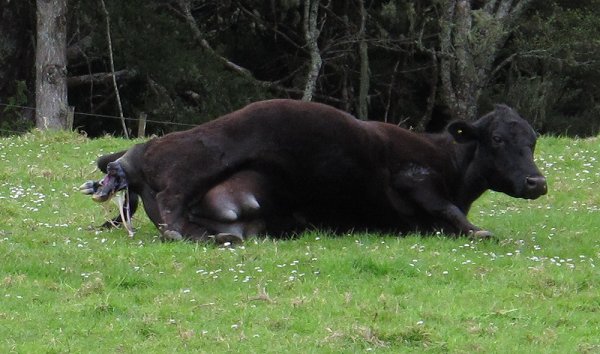 Birth positions, particularly in roomy older cows, can be all over the place.  When I first watched calf births, it concerned me if the nose wasn't tidily on top of two evenly-placed front legs, but I've learnt that all sorts of variations on that basic position will work. 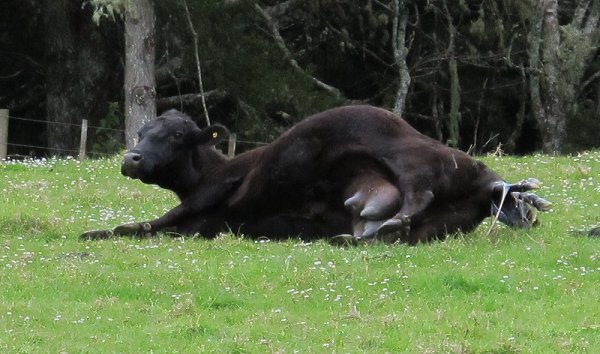 The calf's eyes looked pretty dead when it came out, from my position thirty metres away, but soon it moved, gasped and shook its head. 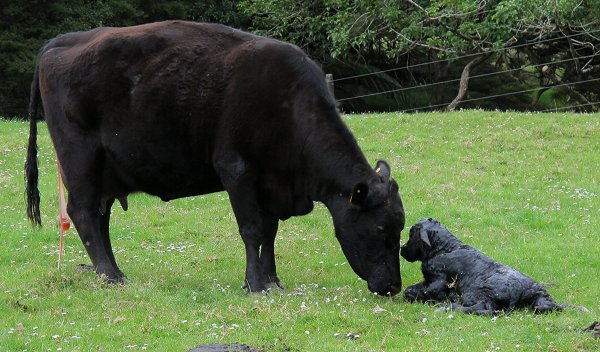 I wasn't expecting this calf for another eight days!  But it looks well-resourced, with the appearance of having quite a bit of fat under the skin.  It was born at 2.32pm, standing at 2.47pm and looking for a feed by 3.12pm - although it didn't quite manage to figure that one out, and both of them lay down for a rest for a while, before trying again later.  When I got closer for a look, I discovered the calf is a bull.  He'll probably be our biggest steer weaner in Autumn - 548 has copious quantities of milk! 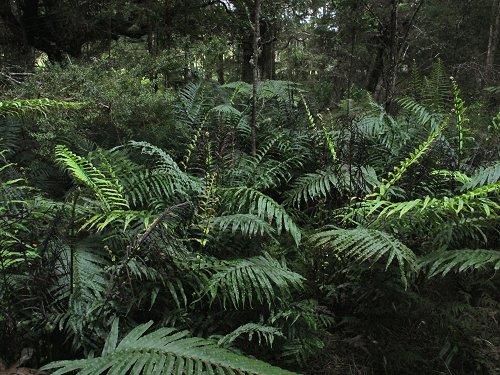 An area of thick ferny undergrowth in the Bush Flat reserve area.  When the cattle still had access here, the ferns were regularly eaten.  The undergrowth varies through the reserve: ferns here, lots of Hangehange seedlings on the other side of the stream, huge numbers of Coprosma seedlings throughout the main Kahikatea tree area.  It's lovely watching the variety of plants which are repopulating the area. 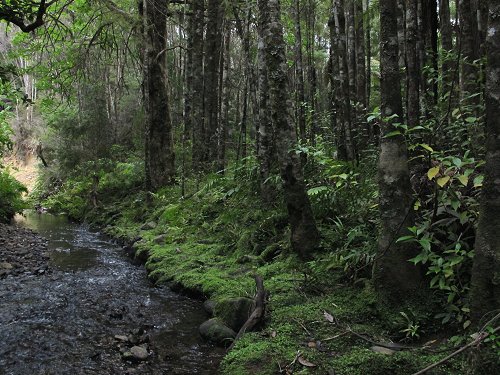 The edge of the stream on the other side of the Kahikatea stand.  The tree trunks are all Kahikatea, with a mix of mostly Hangehange and ferns growing from the moss-covered ground.

There's a slip in the corner at the left of the picture, which requires some attention from us with a chainsaw, to remove some fallen trees which are causing the stream to block and swirl there, making the slip worse. 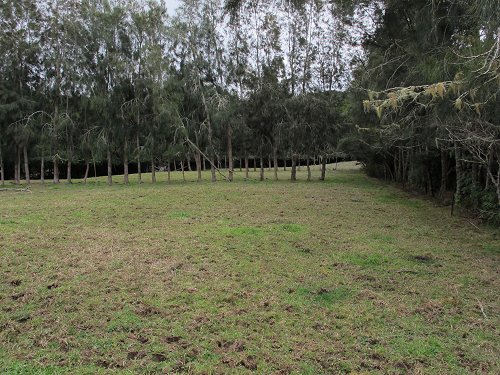 Nothing left to eat!  This is one part of Jane's place, where my three empty cows have been grazing during the winter.  They're a handy little group to keep over here to keep her place tidy.  There's no real grazing value here for my cattle, since we can't get a truck in to put fert or lime on, and because of Jane's occasional practice of throwing garden prunings over the fence, I no longer graze pregnant cows here.

But I left the cows a bit long this time, and they've eaten every last bit of grass.  They're all in pretty good condition though, so they're alright, but I should not have left them so long. 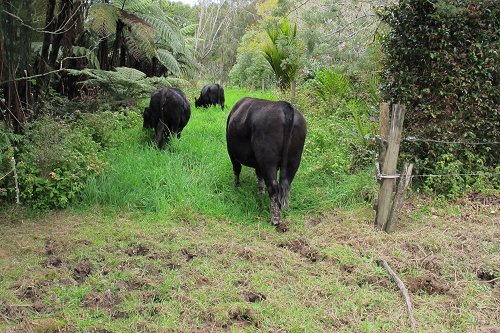 The three of them very happily headed along the alley-way to the other grazing area.  Sadly for them, the grass at the other end is nowhere near as lush as this bit between the two, which they only have time to graze as they walk along. 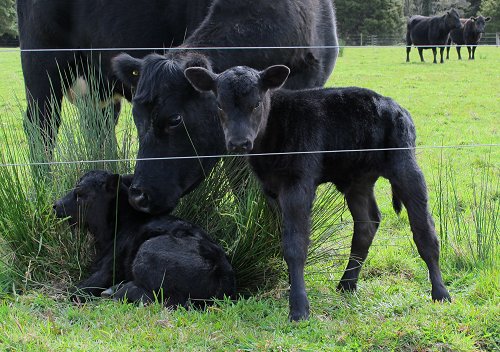 What a lovely family.

The standing calf is in mid-stretch, she doesn't normally stand quite so oddly! 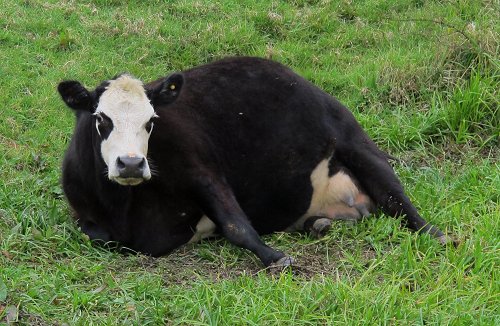 I had to go to town for a short appointment, so arriving home went straight out to the Windmill paddock and found 517 lying, moaning oddly.  Having no idea what her progress had been, that was a little alarming, but when I looked behind her, there were a couple of feet, and she was obviously just doing the early mother-talk vocalising to her yet-to-be-born calf. 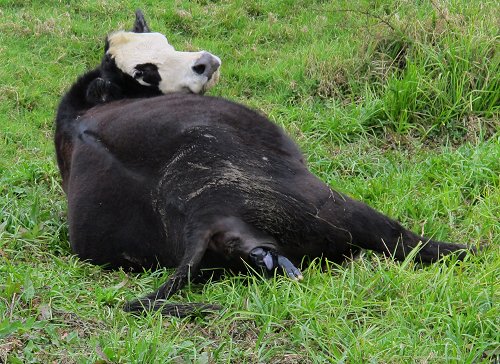 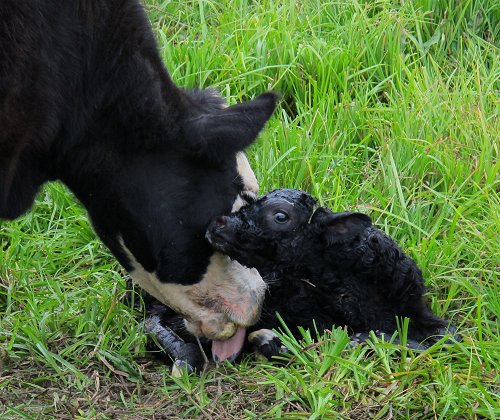 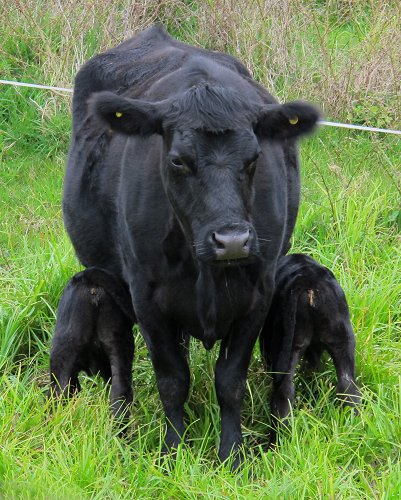 Have they grown yet?

Time for a Competition?

For ten years I ran the annual Isla's Calving Date Competition.  It was good fun thinking about other people thinking about Isla, especially when I was out in the middle of a rainy night checking on her.  It felt appropriate to give the idea a break though, after Isla died, and there wasn't anyone else who could really step into her hoof-prints.

But Eva has been a special individual, from her early obvious superiority during a season when I waited impatiently for U.S. scientists to come up with a test for the genetic defect her sire carried, so that I could know whether or not Eva was worth investing my enthusiasm in.  She was, thankfully, clear, and she grew well and was looking fabulous ... until she nearly died!

She consequently missed getting in calf as a yearling, but she's carrying her first now and the time for her "confinement" draws near!  It's your job to guess the date and time.  There might be a prize, or not; I'm still thinking.