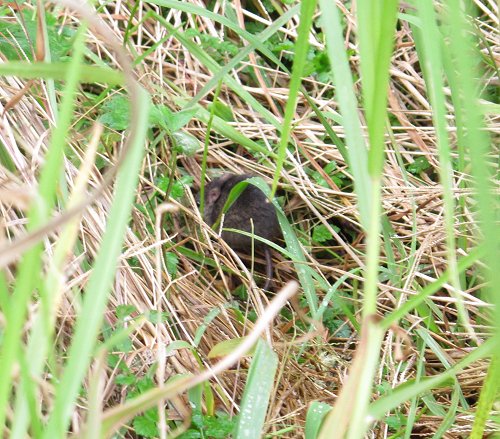 I find it slightly startling to see a mouse outside.  I always think of them as little cosy things which like to keep warm and this doesn't seem like the right sort of place.  I went skiing once and the one thing I can remember about the whole weekend, apart from the wet coldness of it all, was seeing a mouse bounding across the snow towards some rocks.  I fell over, although that probably wasn't from surprise.

This is the grass in the completely out-of-control Road Flat paddock.  I'm going to put the cows in here for a few days to chew and knock the grass down, and then they can go across the road. 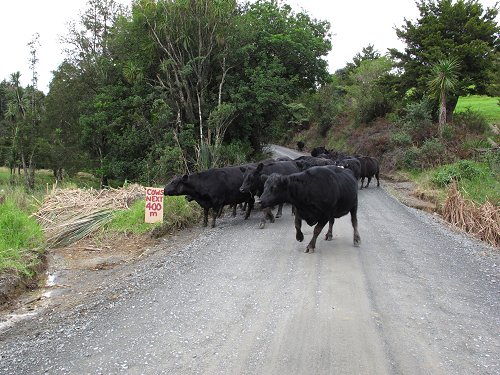 Feeling some trepidation about moving the cows up the road today, I decided to do something to make it a little safer: I made a sign to place on the side of the road.  While the cows waited in the driveway, I rode up the road on the bike and placed my sign near the gate to the Road Flat paddock, just before the road gets narrow and bendy.

I went back and called the cows out of the driveway, and Stephan moved around behind them to stop them heading across the road, as they're more used to doing.  They fortunately follow my calls very readily - a bit too readily by the time I got up around the corners, where the cows started to run!  I needed to stay ahead of them, which meant having to stop them running past me.  Fortunately I had a stick with me, to wave furiously above my head while shouting at them to stop!  I ran backwards most of the way along the last 150 metres, down the slope.  Fortunately nobody drove along the road. 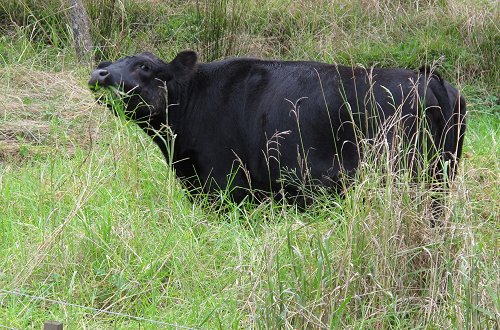 Cows are adaptable creatures, able to nibble the shortest pasture, or work out how to eat the ridiculously long.  The Kikuyu green tips are at the ends of some very long stolons, which the cows don't really want to eat, so they grab a green mouthful and pull up as far as necessary.

There was a violent thunderstorm in the early hours of the morning.  The first flash of lightning woke me, even though our bedroom blind was shut, and the thunderclap followed almost immediately afterwards, with a long period of echoing thumps which we could feel as we lay waiting for it all to stop.  I imagined the cattle being startled by the noise of it.  The fury of the closest electrical discharges and rain and hail storms continued only for about ten minutes at a time, with a couple of quiet periods between all the action - just enough time to drift off to sleep, only to be woken again. 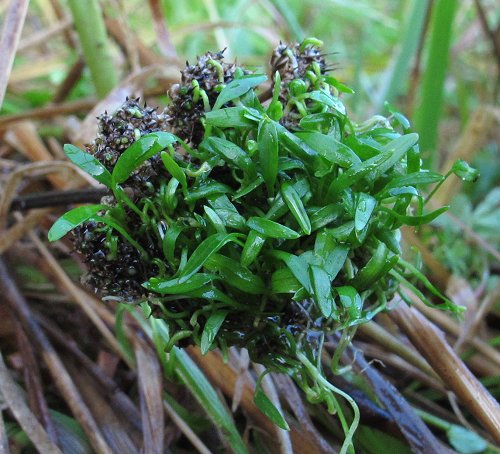 This morning I was not entirely surprised to find that my carefully erected electric tape bisecting the Road Flat paddock, had been broken and the cows were grazing the whole area.  I checked all their legs for any sign of cuts from the tape when they ran through it, but found nothing, thankfully.  I wound up the broken tape and took it all home again.

This little cluster is the germinated seeds in a flowerhead of Dropwort Parsley, commonly known as carrot-weed. 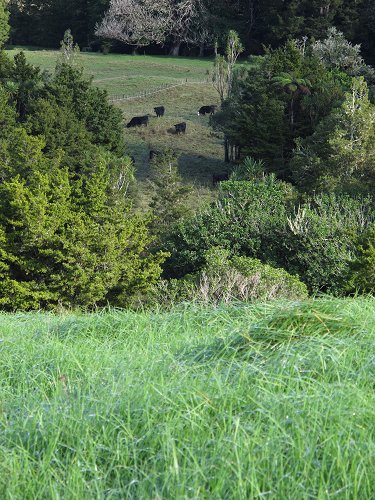 I began setting up the hill over the road for the cows' next move: the grass is so long, that I wish to break feed them - as much as I can on such terrain.  I'll break the paddock into three, and by the time they reach the last third, Stephan will have removed the remainder of the old fence wire and staples from the former boundary fence, so the cows can graze that bit of our farm they've never owned before.

In the foreground of this picture is the long Kikuyu grass on the hill, with the cows down on the Road Flat, where they're still chomping and trampling the overgrowth there. 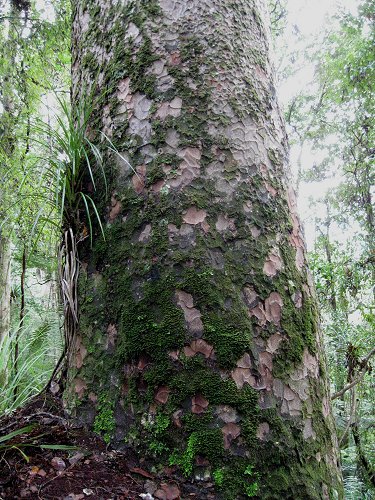 I said yes to a fabulous day out today ... and then realised there was a meeting I had to attend.  So Stephan and friend Lilo went to the NZ Landcare Trust's visit to Puketi Forest and I went to town.

This is the trunk of a Kauri Tree, with its flaking bark which is apparently the tree's defence against other climbing plants. 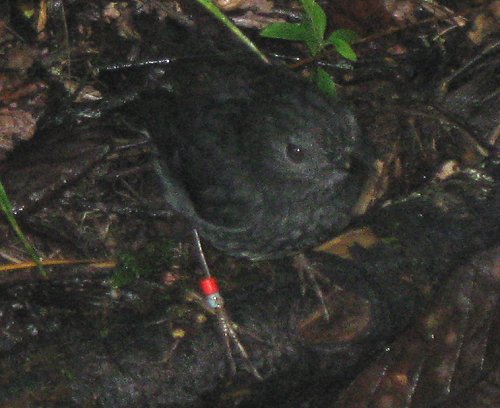 One of the recently released North Island Robins. 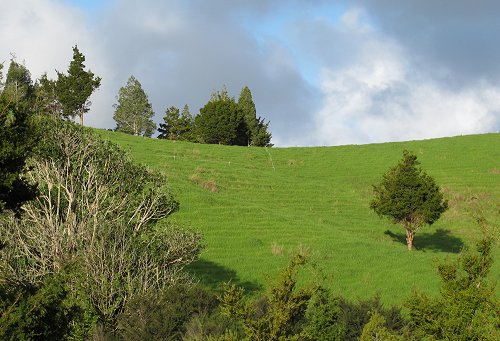 When I arrived home, I climbed again up the hill over the road with another load of electric fencing standards, to finish erecting my tape from the reserve area to the top boundary fence.  It's so nice to be fit enough to climb steadily up a hill without having to rest. 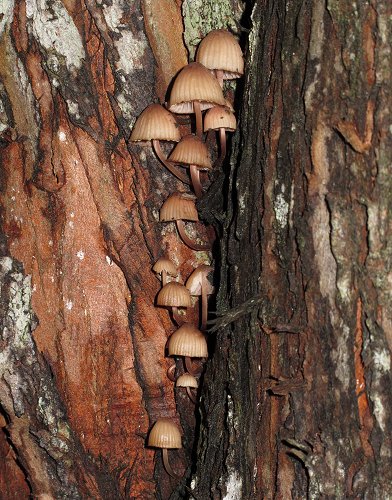 Back down at the bottom, while climbing over the wooden gate back out to the road, I noticed these little toadstools growing up the trunk of a live Totara Tree by the strainer post.

When Stephan arrived home we walked up the road and moved the cows from the Road Flat across onto the hill, which they ran up with great enthusiasm, into more grass than they've seen for a while. 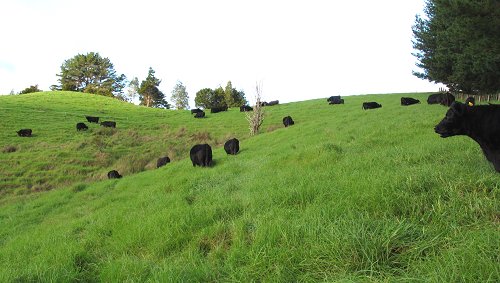 It was an easy job to check the cows this evening, because all 26 of them were visible on the hillside (although not quite in this picture). 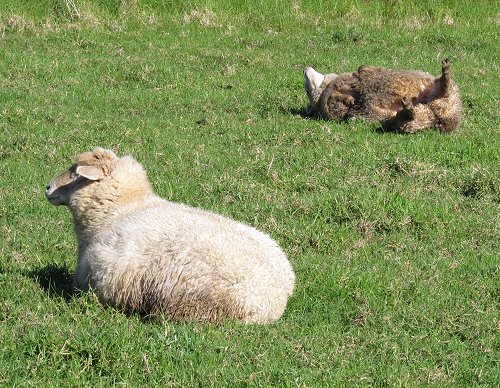 A predictable sight.  Dotty is sitting near her upside-down triplet daughter. 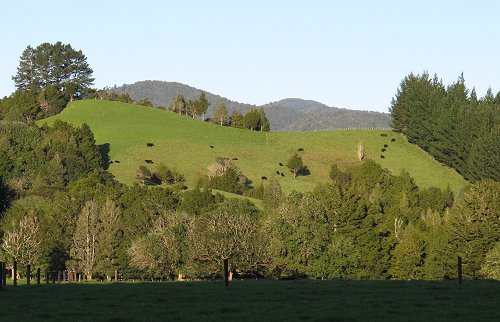 The cows are starting to make an impression on the colour of the hill over the road. 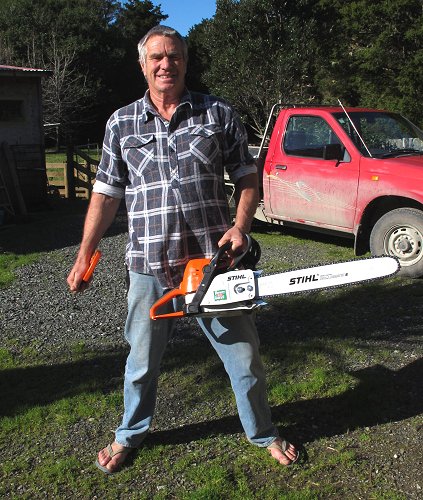 Stephan has a new saw!  And it's not even his birthday.

A few years ago we bought a smaller chainsaw for me to use, but its vibration caused pain in my shoulder, and I had to give up any idea of joining in that sort of work with Stephan.  He's used that saw since, and it's getting a bit worn out, so this is the more appropriately sized replacement.

If you were one of the early readers of this site, you might recall an earlier Stephan-and-chainsaw picture, but I resisted the temptation to encourage such posing again.  I shall only say that in the other picture he wasn't wearing much in the way of safety gear!  I'm sure you'll be happiest if I leave it at that.

Today is my godfather, Hack's, 90th Birthday!  I figured that today of all days he'd be well visited, so I'll go and have a beer with him a bit later.

A very nice visitor arrived this evening: Jess, who hasn't been to see us since 2005 when she was still a child.  We saw them again on their last NZ visit in 2007.  Now she's on an English "gap year" trip and managed to fit in a visit to us, about which we were very pleased. 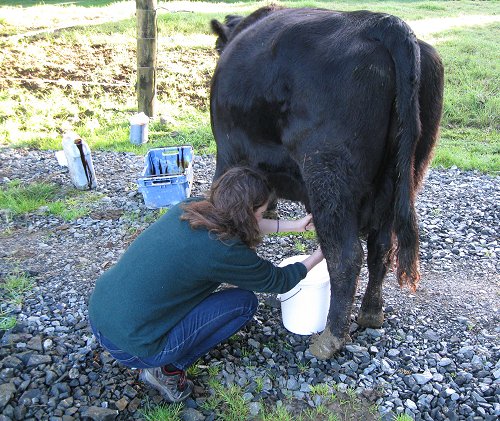 Jess and Stephan went to milk Imagen this morning, and Imagen, sometimes being a cooperative sort of cow, allowed Jess to have a go.

At this angle, the kink in Imagen's tail is obvious.  Ivy must have trodden on her when she was a calf.  Her elder sister Ida, had part of the bottom of her tail trodden off, pointing to a rather careless mother! 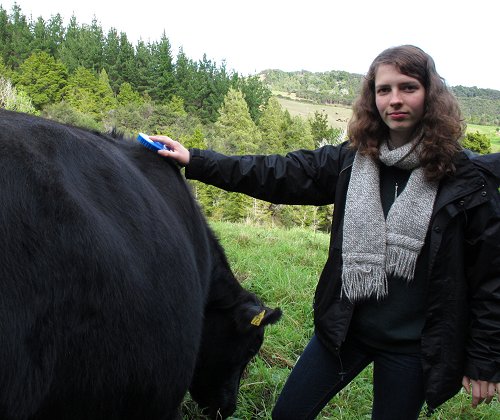 Later on we went for a walk to check on the cows, with brushes, naturally.  Here is Jess with Athena.  It's such a joy having animals which allow visitors to have close contact with them. 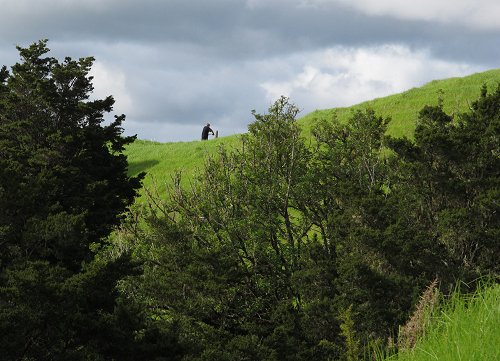 Over the other side of the hill we could see Stephan hard at work still, stripping the ancient not-boundary fence of its rusty wire and staples.  Working in very long grass is tricky, because no bits of wire or staples can be left in the grass.  Cows which accidentally eat sharp metallic things often eventually die because of them. 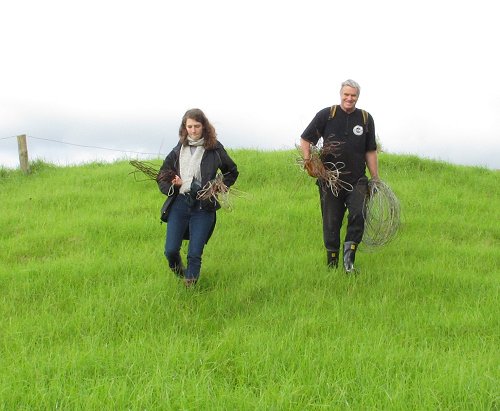 We walked across the hillsides and through a muddy gully and then both picked up some of the wire to help Stephan get it down the hill.  It's nasty stuff to carry, with sharp bits sticking out all over the place and the bundles hooking up with each other, so they're awkward to put down. 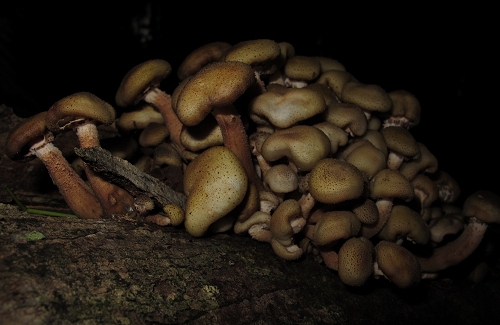 Isn't this an extraordinary photo?  It was one of several I took as I tried to get the light settings right for the environment.  I think I'll have it printed and put it on the wall!

The little fungi cluster was growing on a fallen and rotting Taraire trunk in the reserve area near our house, where Jess and I went to look at the big trees.