When the cows all gather together in the sunshine, they're warm and sleek and lovely.  I walk amongst them, leaning on them and running my hands along their backs. 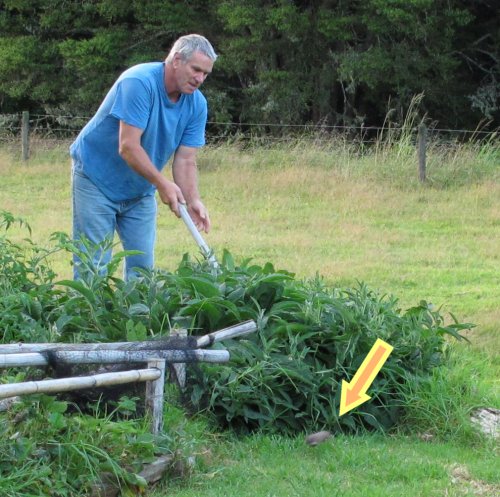 As I was sitting in our living room this evening, a movement outside caught my attention.  It was too small to be one of the cats, so I got up to look: there was a stoat on the deck, looking up at the window in Stephan's direction.  It would not surprise me if it had been thumbing its nose at the trapper!

I grabbed the camera, Stephan grabbed a stick and we rushed outside, where I saw the stoat heading for the vegetable garden and the Comfrey plants.

After a bit of plant beating, the stoat dashed out of the undergrowth and back across the lawn. 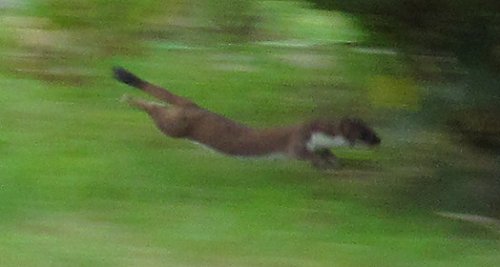 You can tell it's a stoat because it has a black-tipped tail. 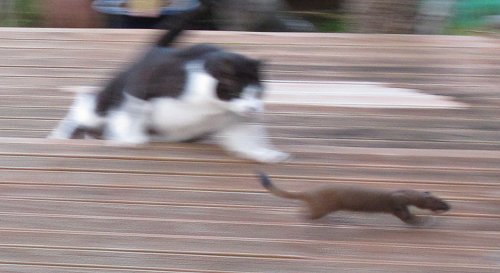 Foxton, even though she's getting quite old, moved pretty quickly in her attempt to catch the fleeing mustelid.  Finan looked very interested but not quite as brave.  Foxton nearly got it, but it hissed at her and disappeared into another part of the garden.

Stephan set a trap where we last saw the creature, but we didn't catch it. 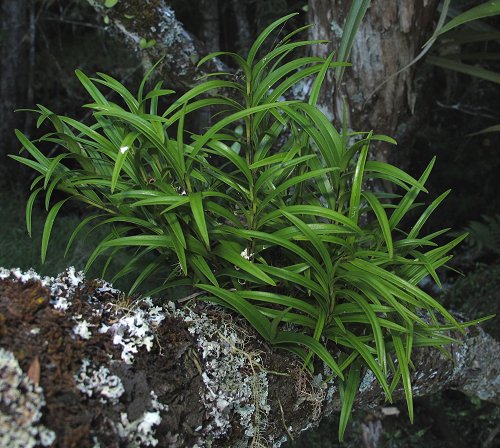 Another orchid to watch, if only I could remember where I took the photo.  There's a hole in my memory.

This is Earina autumnalis, Raupeka, and it will flower sometime during the autumn.

... A little later, in consultation with my cattle notebook, I've remembered: the plant grows on a Totara tree which is tilting into the river, in the Small Hill paddock.

Sitting and writing, having a fairly quiet and pleasant day, I was surprised by an email from a young relative.  It was not a pleasant communication.  The young woman is someone we've had some significant contact with over the years and she had recently been in touch to ask if she could come and visit again.  But it seems she has interpreted kindness as condescension, concern as interference and entirely misread a number of past adult interactions between me and her parents.  She was on the attack in a most unpleasant fashion.

I continue to be surprised by the vehement rudeness of many people in the world of instant electronic communications, particularly of some young adults.  I cannot imagine ever writing such a message to anyone, particularly a person older than myself, even now.  If I were very cross about something, I would still be at great pains to express it politely.  Now she's got that off her chest, I hope not to hear from her ever again!

I put the cattle into the Pines paddock yesterday.  They also had access to the stream, so they could come out of either of the bottom gates and walk along to the other, avoiding having to negotiate the swampy bit at the bottom of the paddock if they chose - we'll have to culvert it at some point.  When I went out to check them this afternoon, the one trough in the paddock was empty and filling very slowly.  I didn't have any tools to investigate, so rode home to ask Stephan to come and sort it out.  There was a tiny stone in the ballcock valve, and once cleaned out, the trough filled normally again.

The cows all stood in the lane, expecting to be moved to another paddock.  They were disappointed. 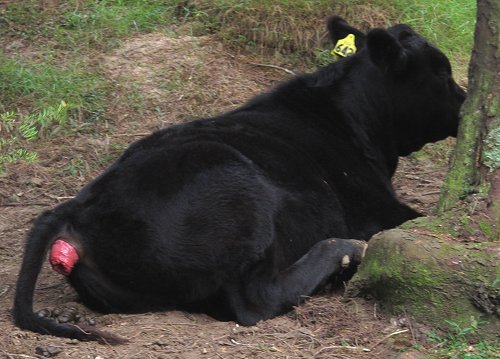 This is 548's son, with a minor rectal prolapse.  I have noticed this in her steer calves before, and her brothers had the same issue.  When the calf stood up, the prolapse remained, but then as he moved, it disappeared back inside again.  I'm not worried about him, but it's not something I really want to propagate in my herd!  548 is a good cow in terms of the size and growth of her calves, but perhaps carrying on with her niece is as close as I want to get to this particular trait. 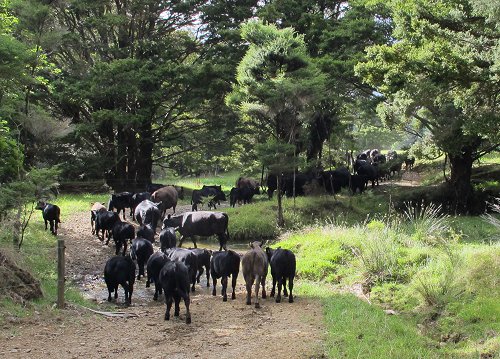 After completing the attendance roll check, I let the cattle out and sent them on their way down to the flats, where I mixed them with Demelza and the bull.  I want to catch any late cows which still aren't in calf, Abigail being one I know of.

We went to the Dargaville Field Days.  $10 each to get in to a huge site full of manufacturers and retailers peddling their wares.  It was nicely cool, with a few showers, all of which fell when we were standing under somebody's shelter.

We were looking particularly at cattle headbails and yards, water tanks, and Stephan spotted a very nice wood stove which he'd really like to put in the kitchen.  Rather sooner than we expected it was after half past four and most of the stall-holders were packing up!  We hadn't got off to a tremendously early start because the weather was pretty horrid in the morning, but I couldn't believe the day had passed so quickly.

There were many things we meant to investigate which we missed, but we had some very good conversations, along with a couple of complete time-wasters.  I caught up with entomologist Jenny Dymock, who visited here once several years ago with a Women in Ag group and has recently been celebrating the approval of the introduction of dung beetles to New Zealand.  We found Tony Corcoran of NAIT, who gave me some excellent assistance in writing an article on the new system last year - which was unfortunately slightly outdated by the time it was published, as the rules and plans for the NAIT system were changing so quickly still.  We found TBFree NZ and conversed at length with Hugh Black, the veterinarian who led the lamb post-mortem workshop last year, and does most of the possum and pig post-mortems looking for TB, and Frank Pavitt of the Animal Health Board, who was another very helpful contact in writing an article on Bovine TB last year.

I still don't like most vehicle sales men I've met.  They're far too ready to be unrealistically negative about one's current vehicle and vastly overstate the benefits of a new one and understate the expense of the money one might need to find should one decide to upgrade.  We've been toying with the idea of trading up to a ute with more space in the cab.  But bearing in mind that we said we'd use our current ute until it stopped going, and that it would be vastly less expensive to buy a waterproof, lockable box for the back, and that it doesn't rain all the time anyway, I think we'll leave that possibility for another year or four.

I went to see someone else's herd today and was delighted to find they had cows as quiet as mine!  They, also, had no dogs.

I have been asked a couple of times recently whether we have dogs, and if not, how do we muster the cattle?  Cattle are creatures of habit, they learn their way around their environment, they learn that a call to the gate generally means they'll be moved to a new paddock, so that's how we do it.  If an animal doesn't show up when called, then we go looking for it - we walk around a paddock, around the hills.

Moving the cows and calves this afternoon, I saw the bull was "playing" with some animal behind the trees further down the paddock, and when they ran to the gate, I realised the white-faced animal I'd seen nearest to him was 470's calf.  As they went through the gate, the bull attempted to mount her!  The calf is just five months old, and around 220kg, but this is still quite early puberty.  Fortunately I had the gates arranged in such a way that the cows had access to two of the Flat 5 paddocks and they all headed up to the far part.  I was able to draft little 660 out into 5d without much bother, so she was then safely away from the bull.  I'll have to watch her for signs of heat again in three weeks, and if I don't see any, I'll have to have the vet check her.  She is far, far too young to be in calf, although obviously not too young to become so.  Any sign of mating or pregnancy in animals under a year old should always be investigated and any pregnancies should be terminated on welfare grounds.