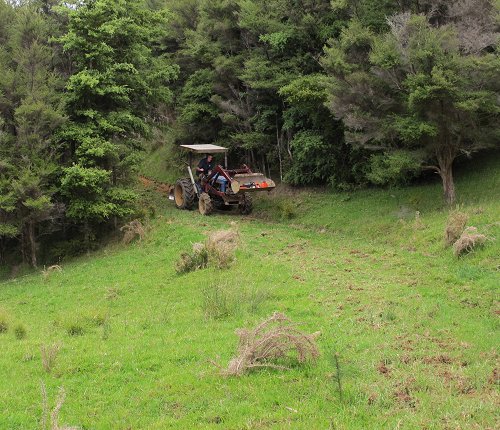 Stephan's been doing some work on the track up the left side of the Big Back Paddock, so I can ride up there to check on the orchids at the top of the wetland.  This year hasn't been sunny enough to see many of them flowering, but if it is warm enough for a little while, I want to be able to get out here quickly! 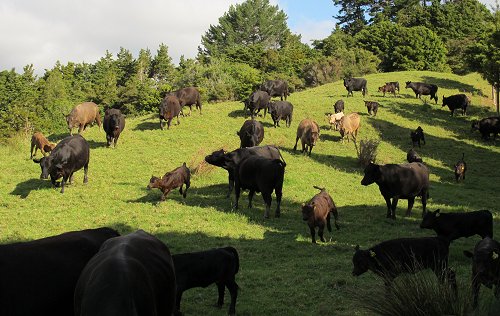 I have some gaps in my cattle notebook, having abdicated some responsibility to Stephan while managing the exams in town, but we moved this lot from the hill over the road to somewhere else, this afternoon.

Eva came thundering towards me and I had to move to avoid being knocked over!  I presume she didn't intend such wickedness, but when you're over 600kg, it's probably quite hard to change your down-hill direction if you get it slightly wrong. 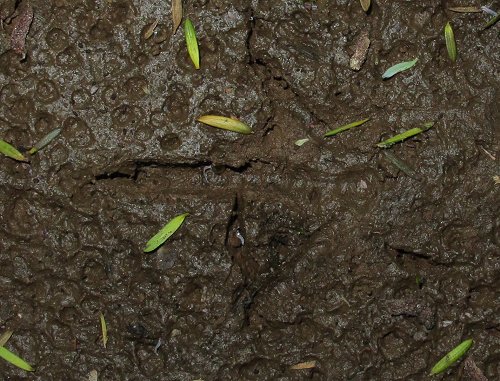 We went for a wander in an area of mature bush which has been fenced off from the cattle for many years.  There are some sink holes full of water, and other places like this where water sometimes sits, then drains away leaving sticky mud.  In several places in the mud were the footprints of a Kiwi!  These are not very far from where we live, and I suspect that if we spent some nights sleeping outside, we'd probably hear Kiwi calling nearby.  Cool! 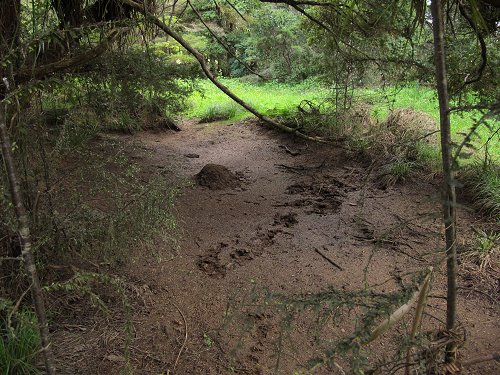 We looked in a couple of other places like this in Jane's part of the bush and found one more lot of prints.

Most of the mess in this picture is our gum-boot prints, not those of a monster Kiwi! 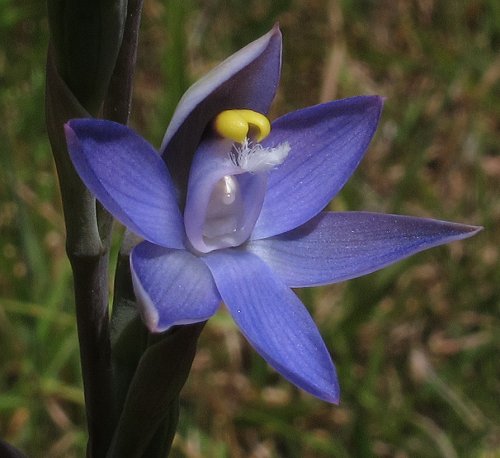 I love this colour!  What a stunning flower.

There are lots of these plants in the Mushroom 3 paddock, on the cows' side of the Bush Reserve fence.  I put an electric tape around them so the cows wouldn't chew them off this year, so I'd get to see what colour the flowers are. 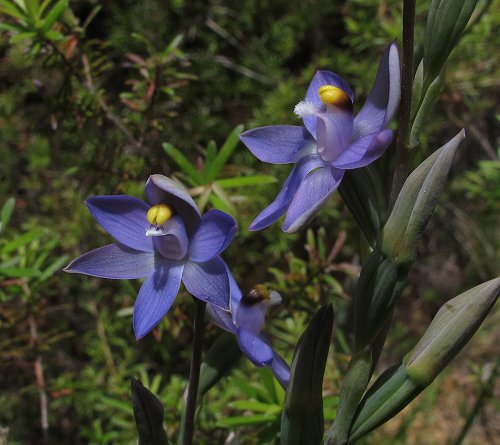 I gather it's more common for Sun orchids to have stripes or spots on their petals, but none of ours do. 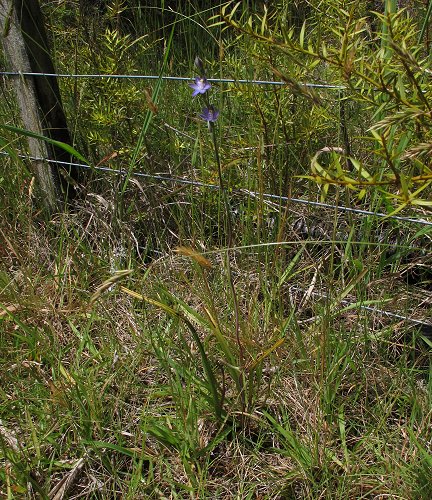 It would be very easy to miss these plants if you weren't deliberately looking for them.  They're very slight and the flowers, unless blooming in great numbers, aren't big enough to be visible from any distance. 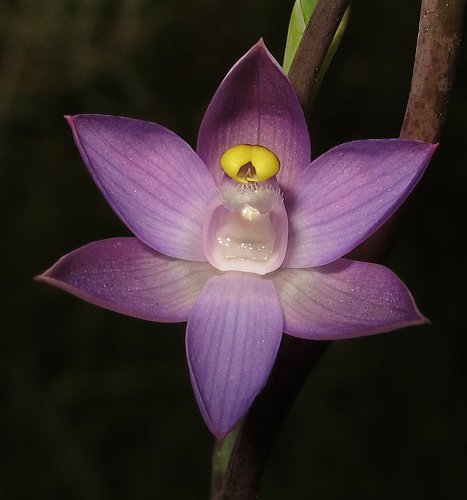 This is one of the flowers up in the Big Back Paddock.  Most of the plants I've found have been of this pinky-purple hue. 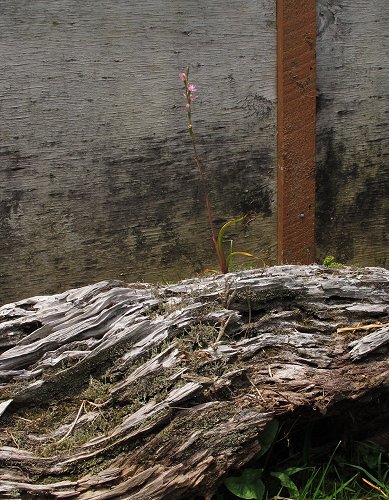 Back at home the orchid on the small piece of Puriri which I moved last year, is a delicate pink.  I'm glad I spotted the plant and brought it to safety! 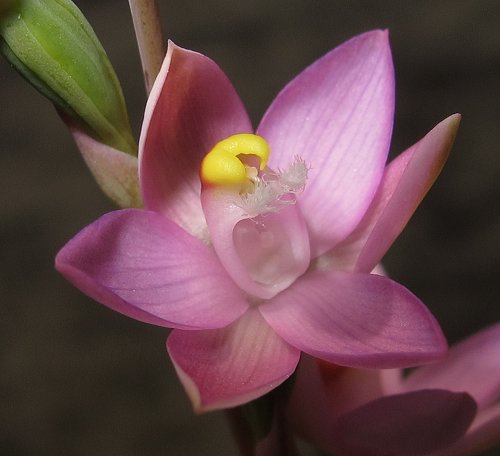 A close-up of that flower.  It appears to be similar in every respect other than colour, to the purple and blue flowers.  Its column is quite different from the one growing on our Puriri log. 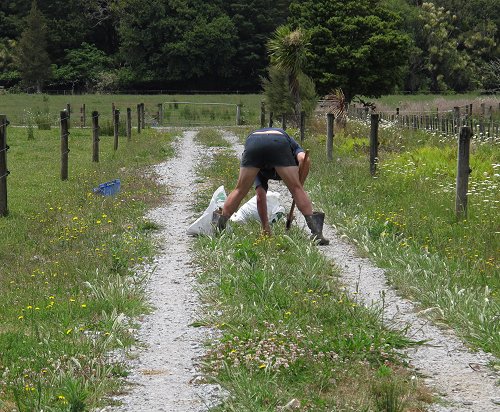 While I was off looking at pretty flowers, Stephan had started working on the weedy track.  We need to get rid of this weed before it has a chance to seed.

After a bit of research, we think it is probably Annual Beard Grass.  It'll take hours to pull it all out. 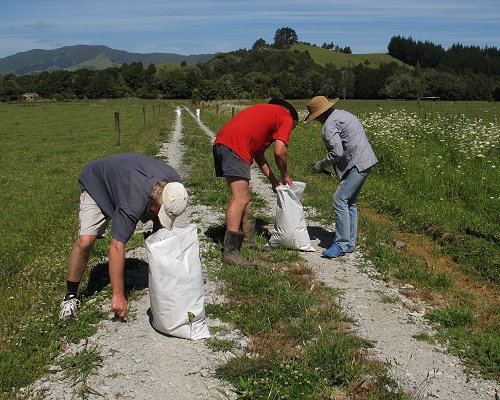 But then we had a phone call from Christine, who has intended to visit for the last year, but neither of us got round to organising it.  I suggested it would be very helpful to us if she and her brother Bruce brought a gardening glove and trowel each with them, to help us deal to the weed infestation.

We wandered up the track with bags and conversation and the whole lot was gone in about an hour, instead of it taking Stephan and I at least twice as long!  Help from other people is so very much appreciated!  (Stephan went out and sprayed the tracks in the evening, when the wind died down.)

Afterwards we continued out to have a look at the cows and calves and talked with Bruce about cattle, breeding, house cows, milking and all manner of questions he had regarding his own newly purchased calves. 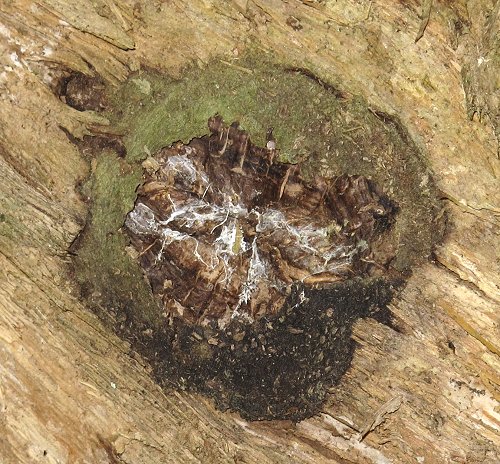 I noticed this scar in the Puriri tree outside our house, where I hang the washing.  It was the hole in which a Puriri Moth Caterpillar lived its hidden larval life for several years, which it vacated as a moth in February 2010.

The untidy remains of the caterpillar's silken door will eventually disappear, leaving the circular scar in the bark.  Most of the Puriri have such scars all the way up their trunks. 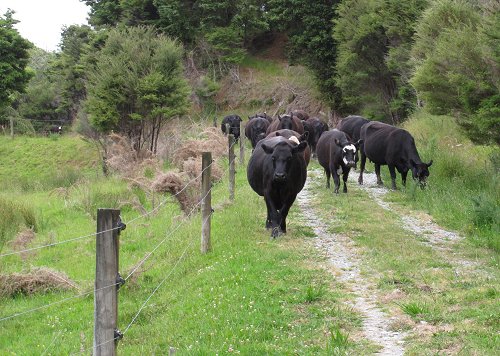 The exams ended early this afternoon and I packed everything up and sent things off to the NZQA, handed in keys and thanks to various people at College and happily returned to farming.

To celebrate, I took the cows for a walk. 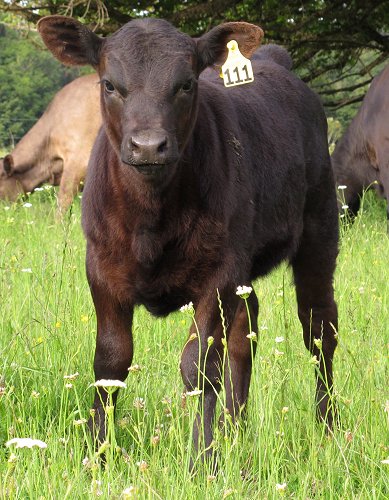 (For those not resident in Aotearoa, 111 is our emergency telephone number.)

When I was organising the tags for this year, it was obvious which number this calf would get, since she wouldn't even have existed without the aid of the wonderful members of our local Fire Brigade!