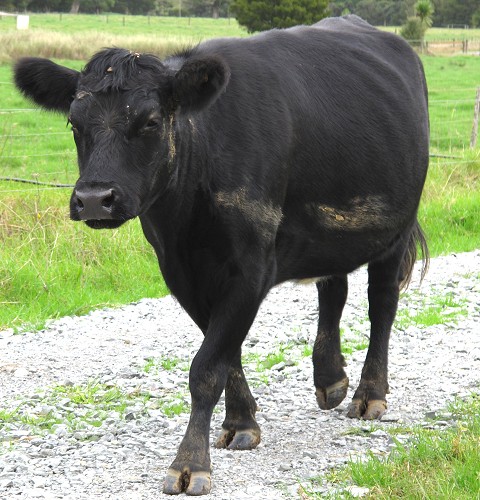 After their very late night watching the royal wedding on television, the girls were a wee bit tired this morning when I woke them not long after seven.  They needed to be up and dressed and ready to go to town to catch the bus back to Auckland.  It was good fun having them to stay.

Later in the day I brought the 16 weaned cows from the Small Hill paddock and then the latest five to be weaned from 5d and created a 21-cow mob.  This is 545.  I wondered where she'd been to scrape mud onto her coat like that.

Eva was with the mob when I put them into the Small Hill paddock, but she didn't turn up when I called them to come out.  I decided I just wasn't going to worry about her this time, and left her to come down in her own time, which she eventually did.

We took the weaners to the yards, weighed them again, then put them in the House Paddock for the night, ready for the first lot of them to go off on a truck in the morning.

They are a lovely looking lot this year.

Sunday the 1st of May

Aubin came in his little truck this morning and took ten heifers off to their new home, then came back for the four steers, which will go to a different block a little further away.  The weather wasn't particularly nice, but it didn't rain on us as we sorted and loaded the cattle.  There was a lot of gusty wind!

The remaining four little heifers walked back to the House Paddock.  I'm keeping the white-faced calf and the other three are to go elsewhere a bit later.

The power went off at 8am this morning, and won't be back on again until 5pm.  When it went off, I discovered that my Uninterruptible Power Supply (UPS) isn't uninterruptible any longer.  As we're approaching winter, the time of power cuts and voltage fluctuations, I shall have to do something about replacing it with a better model. 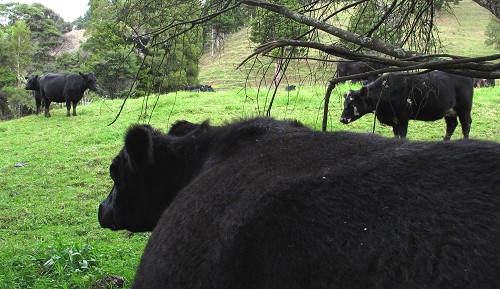 This is what cows do on a blustery, slightly rainy day: they stand around looking bored. 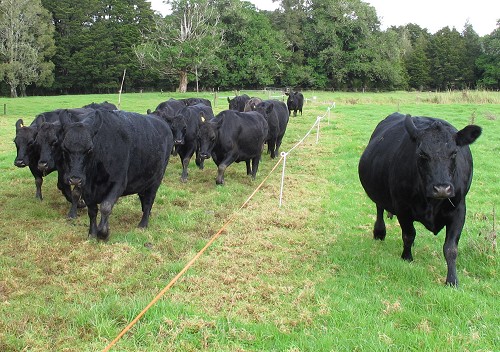 The weaned cows are now the Kikuyu pasture clean-up crew.  I make them eat the grass down as low as possible before giving them the next strip of green.  Care is needed, because I don't want to give them less feed than they need to remain healthy, but it is possible to give them chunks of the paddock so that they get enough to eat overall, but perform the pasture maintenance function too.  If they had the whole paddock all at once, they'd only eat the top bits for a while, so they'd have heaps to eat to start with, but very little of value by the time they'd finished.  This is a bit like making unwilling children eat vegetables: mix up the unattractive stuff with the nice bits, rather than leaving all the unattractive stuff to be eaten in a lump at the end.  The cows are allowed to spit out the dry bits though.

Abigail is the cow on the wrong side of the tape.  There's something not quite right with our electric fencing at present, and the shock they get when touching any part of it isn't sufficient to deter some of them from pushing through such barriers. 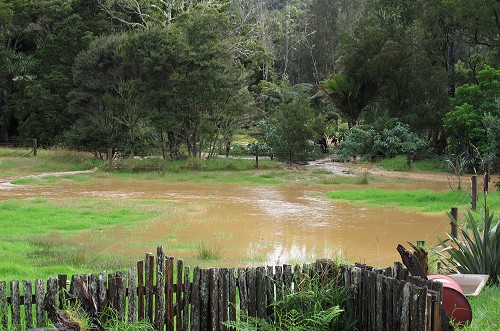 I was doing dishes and tidying things up this morning with the computer turned off, because there was a significant thunder-storm, with extremely heavy rain.

I was listening to the radio and going about my business, not taking much notice of what was going on outside until something about the colours out the front windows caught my eye: there was far too much brown! 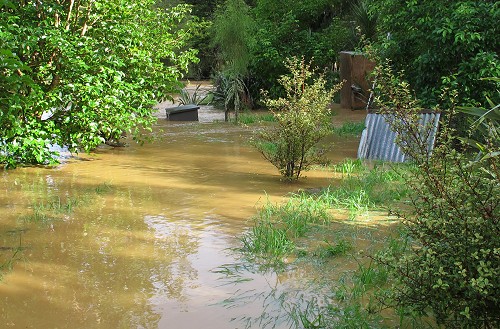 Fortunately for the two new young hens, I got them out of their cage before they got too wet - that their little rectangular house in the middle of the flow.  I also had to rescue the bantams from the A-frame cage to the right, as the water continued to rise.

I'd initially fumbled around trying to put my boots on, but quickly realised that was a bit silly.  I had to wade through water up to mid-thigh to get to the hen cages and then back around the pond again. 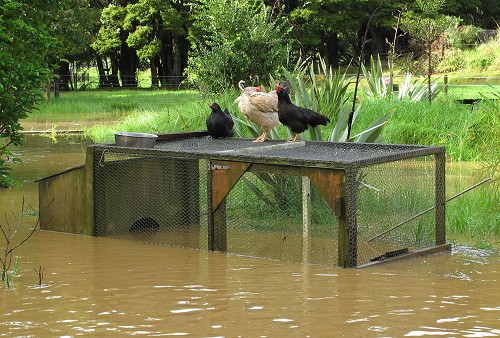 These hens were inside their nesting box area when I rescued them, and they flew from the decreasing bit of "dry" grass I put them on, onto the top of the cage, where they spent the rest of the day, as if on an island. 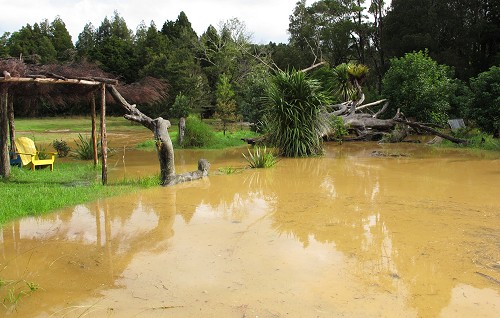 The water came up very quickly and kept on coming for a while.

Because it wasn't raining any longer, once the water had drained from where it fell in the hills, there was no more to follow it and the levels quite quickly dropped again.  Strangely, even though this is our water source stream, our water kept running.  It got a bit cloudy for a time, but there was no other problem with it.  The pond was all muddy again, presumably more of the silt coming down from the big slip.

The front which caused this major rain-bearing thunderstorm continued south and later in the day caused a Tornado near Auckland which killed one person and injured many more! 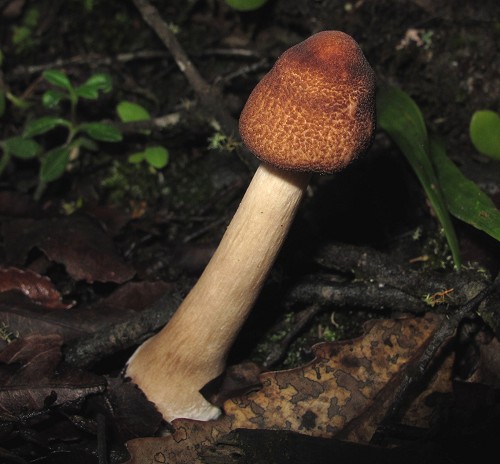 Later, when the streams had gone down, I went out to check on the cattle in one of the paddocks where there would have been quite a bit of water.  They were all fine (except for 93, in the next photo).  This is a little toadstool I found growing from under the base of a fallen Kanuka tree. 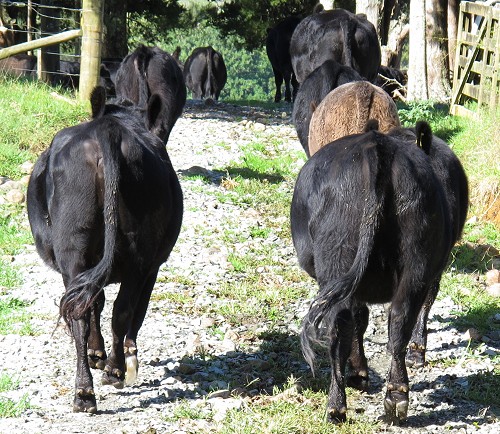 Emma 93 is the heifer on the right in this picture.  It's not immediately obvious, but there's rather a lot more mucous around her rear than there should be.  I think it's highly likely she's slipped her pregnancy.

She's well enough, but I'll keep an eye on her over the next few days.  I think I'd better do some blood testing, to make sure there's nothing really untoward going on here. 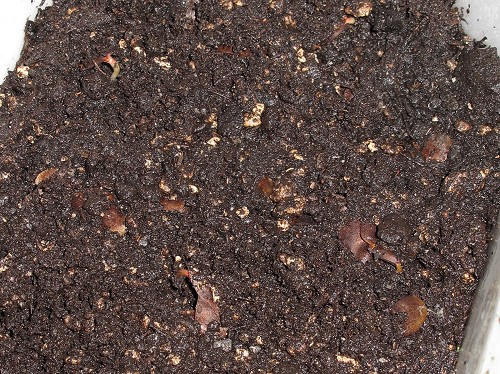 Stephan brought a green Kauri seed cone home with him from his trapping walk a few weeks ago and when it fell apart, we sorted out the good seeds from it and I immediately planted them.  Kauri seeds don't last very long after they fall from their cones.  Viable seeds are solid, but the others are hollow, squishy or flat.  They're a bit like pine tree seeds, with a little wing on them.

I only planted these a few days ago, when the girls were here, and already they're germinating.  You may be able to see the bent stems of three of the seedlings in this picture.

I did some more weaning today: three of the four little bulls, four steers and seven heifers.

When I put the newly weaned seven heifers in with the four which are already weaned, there was a big fight!  It's not nearly as alarming watching 250kg calves fighting as it is watching their large mothers. 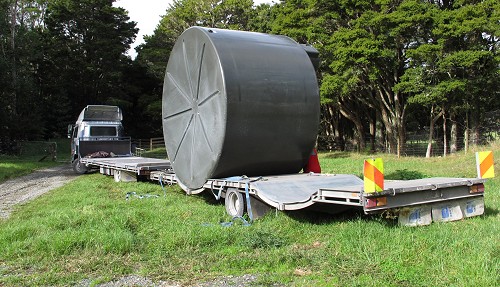 This afternoon, the 30,000 litre tank we ordered a few weeks ago, arrived.  The weather forecast had been for gale-force winds and rain, but fortunately the weather was reasonably calm.

Stephan and the driver pushed the tank off the trailer and it thumped to the ground, where it sat, looking huge and immoveable.

But Stephan can move anything!  With the tractor, I pulled the tank back over onto its round side, and then we began to roll it along the ground.  We started out rolling it on old bits of carpet, but that soon became tiresome, and it seemed that the tank wasn't suffering much scratching on the track gravel, so we only put the carpet down when we needed to push the tank around on one spot to turn it in a slightly different direction.

We tied some padding onto the tractor's front end loader bucket, so that I could drive along as a back-stop to the tank as we went up the slope from the driveway to the first part of the farm track.  The tank weighs somewhere around 500kg, so it's pretty hefty, but it rolled reasonably easily. 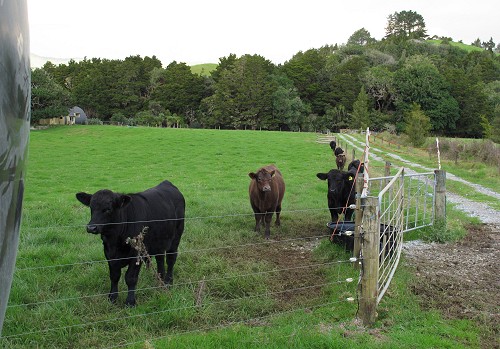 Stephan did most of the pushing, while I went ahead checking for and removing large sharp bits of gravel - thinking that 500kg of plastic rolling over the top of me would feel quite heavy, even though it looked lovely and smooth!

This picture looks back down the track along which we'd rolled the tank from down behind the house.

None of the cattle seemed bothered, probably because the big round thing was moving so slowly. 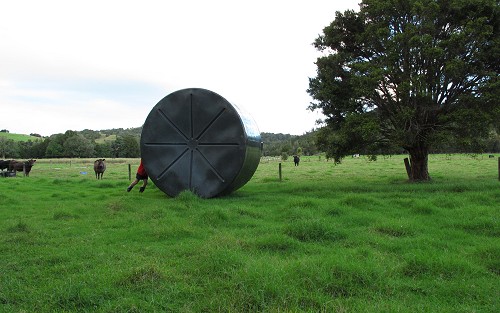 Stephan rolled it along to rest for the night in the lee of that Totara tree, where he tied the tank to the fence and to the tractor where I parked it as a stop for the tank on one side.  The gale-force winds having failed to arrive during the afternoon, we wanted to make sure the tank wouldn't go anywhere if the weather changed overnight.

Stephan said he was quite tired.  I don't know what's the matter with him!