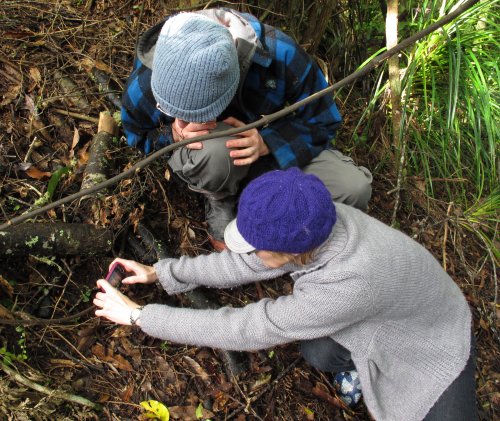 We took Mike and Chantelle on a short orchid tour before they left us this morning.  I think Mike might just about be hooked.  They're fascinating plants, although generally most impressive when you get home with the photographs and put them up on a big screen.  They're quite hard to see in their minute, ground-level state.

The weather looked like it might be alright for drenching the bulls... until about two minutes after I put the pour-on over the backs of the two older bulls.  The drench is like liquid gold, at just under 20c per millilitre.  The bulls, both weighing around 560kg, had 56mls each, costing a bit over $10 each for them.  Fortunately the rain was really only light drizzle, only wetting enough to create droplets in their hair. 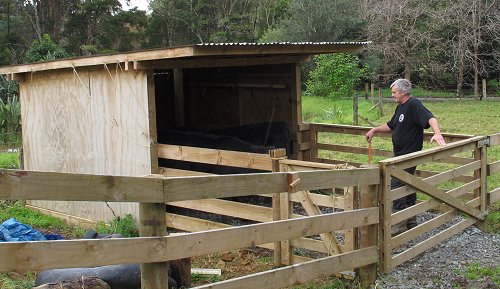 When the sky cleared again, I did the small bulls, after drying their backs with an old towel.  I really wanted to get them done, so afterwards we herded them into the little milking shed, where during two more minor showers, we took turns in standing with the bulls to keep them in under the shelter and dry for the requisite minimum two hours after treatment. 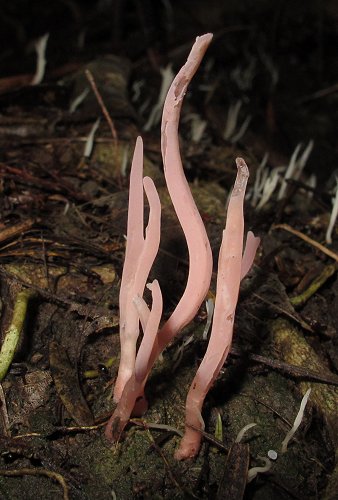 Cute: haven't found a pink one before!  Another of the Clavariaceae again I think, but without serious microscopic study, I can't tell you which one. 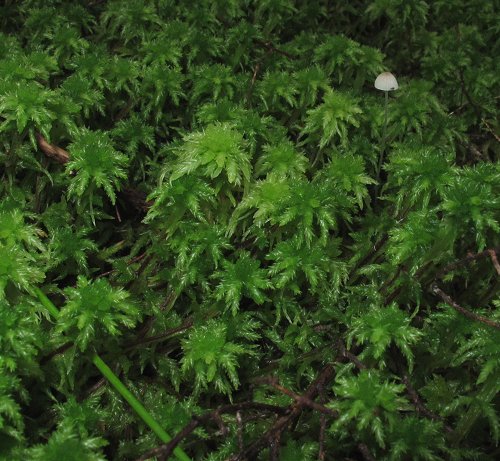 This moss forms great spongy clumps on the ground in damp places in the bush.  It's very pretty.

Monday the 1st of August

On a lovely fine day I washed windows.  I do them once a year, whether they need it or not. 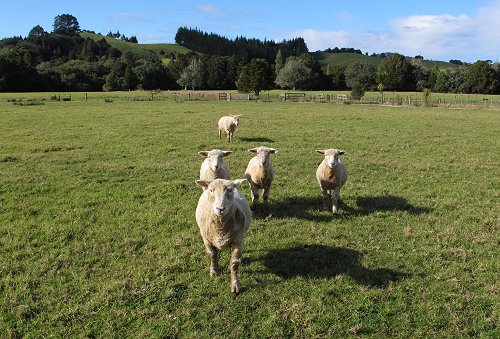 I don't know what this lot thought I was going to do for them.  I walked across the paddock because I could only see seven and the missing ewe was Yvette, now quite old and frail, and I needed to check she was alright.  She was sitting down in a dip, out of the breeze, quite happy. 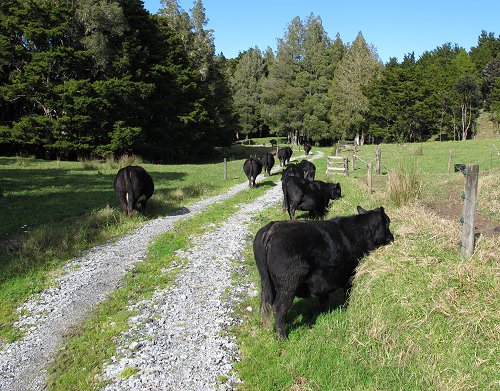 I fetched the cows from the Back Barn paddock to give them their second copper shot for the winter.  It's two months now since the first one, and I needed to get this one done so there's time for one more before they calve at the beginning of October.

Demelza, fat and slow, wouldn't move along the lane, so I gave up and left her to come in her own time.  Since I'm pretty sure she's no longer pregnant and I might send her to the works, it's not vital she gets the copper this time.  She caught us up along the top of the Flat 1 paddock.

After I'd finished in the yards, Demelza again dallied behind the others, so I drafted her off and put her across the river with the other two empty cows.

I found the first tick of the season, in its first tiny feeding phase, on one of the cows.  I'm not sure if they're early this year, but I have no doubt they'll be numerous, after such a mild winter.  I've been toying with the idea of attempting to eliminate them - putting an insecticide on the cows to kill them, at the time the new ticks need to feed to progress to their next life stage.  Theoretically we might at least lower the numbers of ticks considerably if we got the timing right.  I'll have to do some research and talk to the vets. 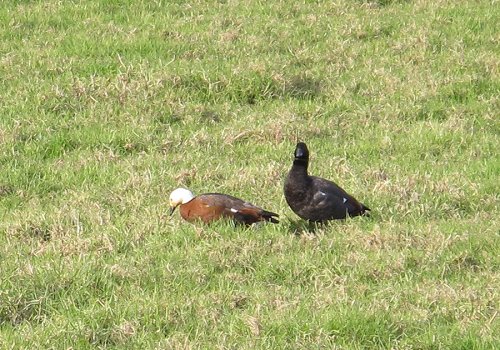 I reckon these two are looking embarrassed, because I caught them up to something!  Putangitangi, Paradise Ducks, are probably about to start nesting, so it's mating season.

The dark bird is the male. 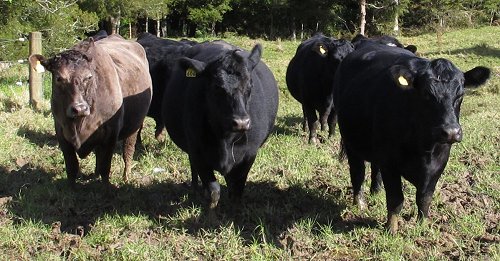 Another fine and mild day, so in the early afternoon I called the pregnant R3 heifers down out of the Big Back paddock.  They've all gained a bit of condition since I separated them from the cow mob.

When they'd been done I put them into the House Paddock with the ten yearlings and R2 heifers, because I'm running out of good grass to feed them separately and the easiest area to keep them now is the hill paddock over the road.  Before they go there they need a safe flat paddock in which to get reacquainted.

The best place for the pregnant heifers to be, coming up to calving time, is over the road where they have to climb up and down the hill regularly for water and grazing.  Long-time farmers are convinced that keeping heifers physically fit is an important contributor to trouble-free calving.  Some research was recently carried out on heifers being used to monitor pregnancy feeding effects on calf size and calving difficulty, in which one group was regularly exercised by making them walk a specified distance every day.  The research failed to find any difference between the exercised group and the control heifers.  However, the experiment only walked the heifers rather having them clambering up and down slopes, so the effect may not have been the same. 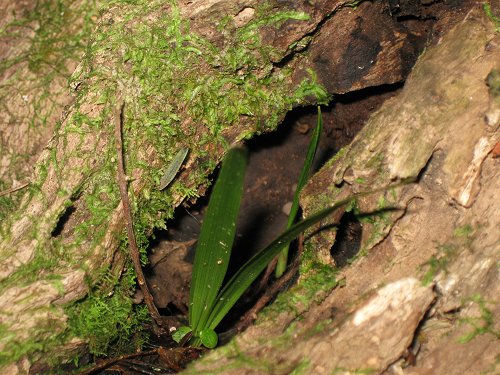 Stephan brought this picture home from his day out trapping, proving that he too can now spot an orchid plant! 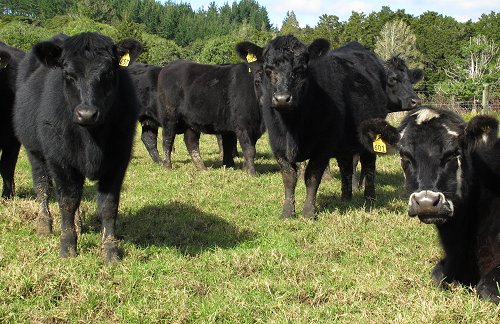 After mixing the two mobs of heifers, I was pleased to observe that these two, mother 605 (right centre) and her daughter, 657 (left), didn't spend much time together and hardly registered each other's presence.  They were weaned on the 5th of May - three months ago - and I thought the calf might attempt to suckle her mother.  I'm glad she hasn't. 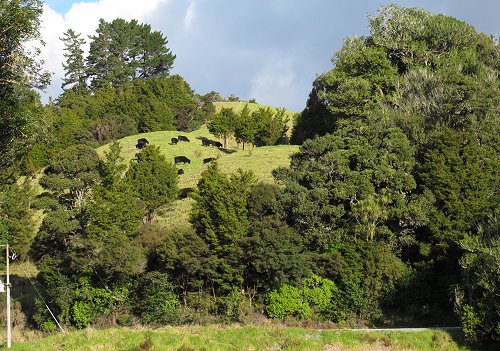 The heifers having settled down nicely together, we took them over the road.  I always like looking back up there as we walk back along the driveway, to watch them heading up the hill to see where the best grass is. 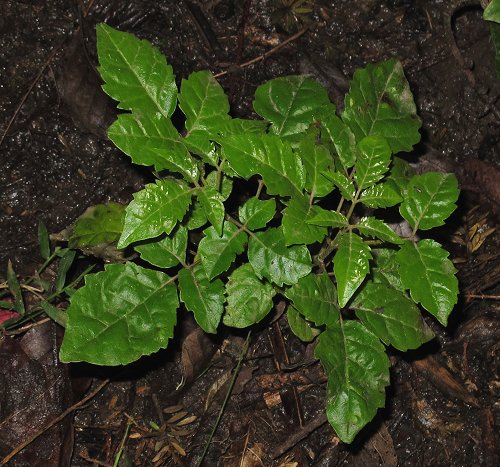 I went to check on the heifers over the road and on my way back down the hill, went through the reserve area, looking to see what was growing there.

There are lots of Taraire seedlings as everywhere else around the farm, but also quite a few Puriri (pictured), which would never have had the chance to grow when the cattle had access to this area. 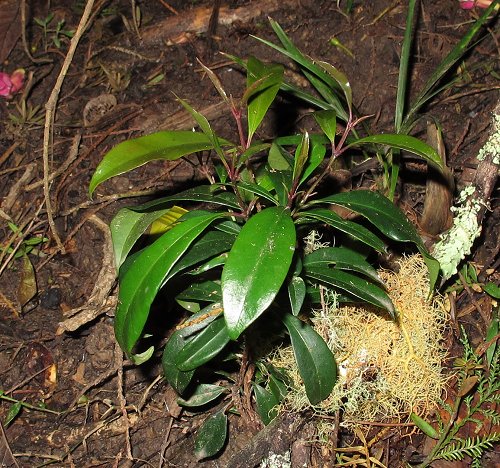 Unfortunately there are also quite a few of these: Acmena smithii I think, commonly called Monkey Apple.  They're a pest species which used to be planted regularly as hedges and shelter belts.  On Jane's place next door, and at the original farm house where Muriel, Patrick, Andrew and Stephan used to live, there are quite a few of them and these plants are no doubt their offspring.  The trees have marble-sized berries which the native wood pigeons happily eat, then expel the seed after digestion of the fruit.  I find the seedlings mostly in areas quite close to the parent trees - within about 150 metres.  What is alarming is that we won't find all of the seedlings to destroy them and when they grow up and fruit, their seeds will spread and gradually those trees will populate the native bush areas.  They are faster growing trees than most of the natives.