The week beginning the 3rd of September 2011.
Saturday the 3rd 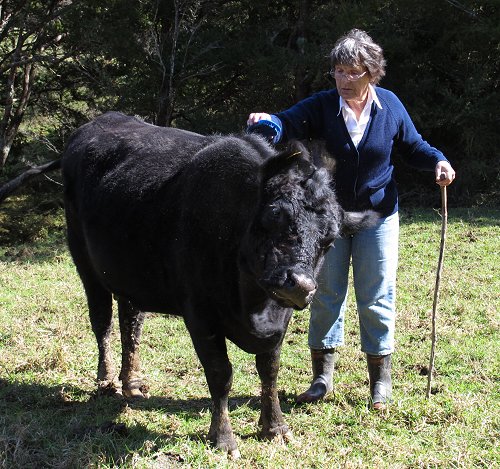 Jill and I walked out to check on the cows in the Back Barn paddock, carrying brushes.  456 was quite happy to receive some attention.  456 is a daughter of Onix; she is a productive and pleasant cow. 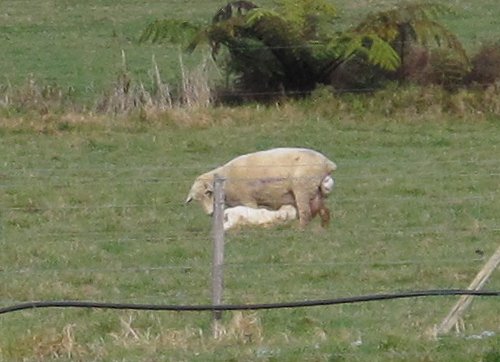 I blearily looked out of the window when I got up this morning and had to look again to figure out what I was seeing!  At that moment the already-born lamb wasn't visible, and it took me a moment to work out what the extra bit of sheep at the back of the ewe was: the head of her second lamb.

We walked out to the paddock, and the easiest way to catch the ewe was to pick up her first lamb and carry it, calling to its mother, to the gateway, which forms a little enclosure. 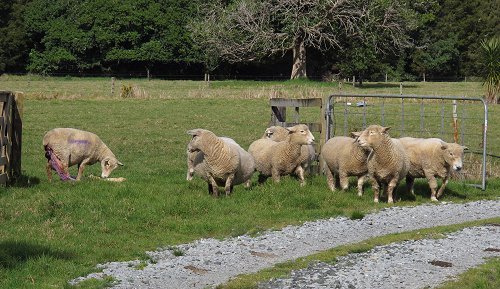 Stephan tipped the ewe over onto her side, I glooped a good amount of lube onto my (prewashed) hand, and investigated inside the ewe.  Both of the lamb's legs were back inside the ewe, but since there was room for me to get my hand in beside the lamb, I was able to gradually work one leg forward and out, and then pull the lamb free.  With it lying on the ground, I lifted one back leg and noted a scrotum (I like to know what sex they are) and took the lamb to the front of the ewe for her to clean it up.

My lambing date calculations were awry: I ought to have expected this event today, and have moved the ewes to the House paddock already!  We called the others down to the gate and encouraged them to walk out past the new little family and along the lane, then we picked up a lamb each and carried them along to the House Paddock, with the ewe nervously in attendance.  We put them down on the grass directly opposite my office window, and I was able to watch their first feeds and know all was well, without having to get up and look for them. 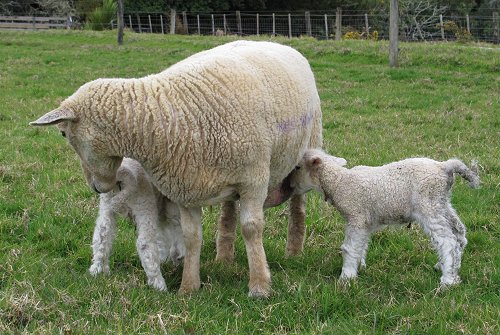 The ewe and lambs are looking good today.

This is the ewe which was cast and about which I was worried last week, so I'm pleased all is well with the three of them. 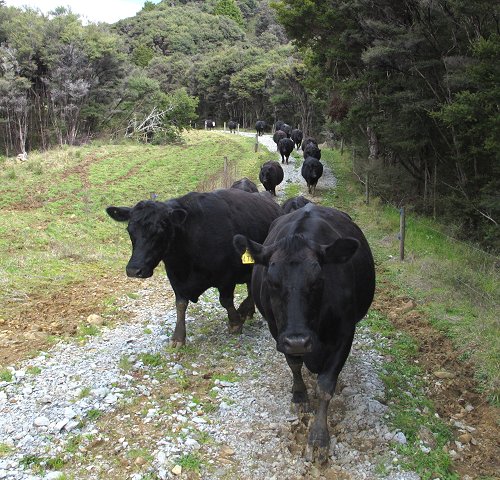 Jill and I walked out to see the cows again and this time led them back through the Back Barn Paddock, where they were last on Saturday, to the Middle Back, which hasn't been grazed for a few weeks while Stephan was doing some pruning and clearing work there.

The Middle Back paddock is one of two on the farm which doesn't have direct access from any of the lanes.  We have a plan to fence a lane along "Route 356", which will also fence off a wetland area formed by small water runs from several gullies, and will end at a gateway into the Middle Back.  When we subdivide the PW, that lane will also serve those paddocks. 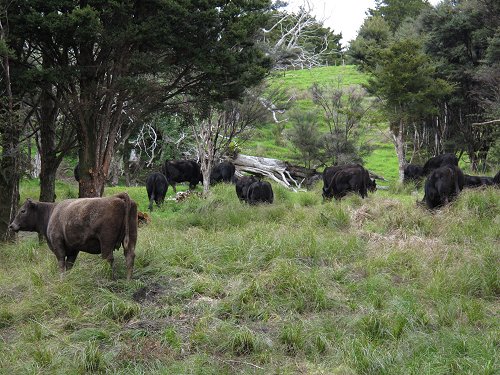 Unfortunately most of the green stuff in the foreground is sedge, rather than palatable grass.  It has finely serrated, cutty edges, so it probably isn't very nice to eat, although the cows will do so.  We've been waging a slow war on it for a while, although we've let it advance far more than we ought to have done!

Beyond the cows is a fallen Puriri trunk, upon which grow a number of Sun Orchid plants.

We spent the morning in the garden, Stephan weeding things, while I pruned roses and Jill washed some windows.  How industrious!  We're not very good gardeners - at least I'm not; Stephan grows vegetables, succulents, herbs and other useful things, but I figure I have 240 acres of garden and I don't like weeding.  The roses I grow may have names, but I can never remember them, and the only ones which remain in the garden are those which can cope with, or don't attract aphids or diseases.  Anything fragile has already died. 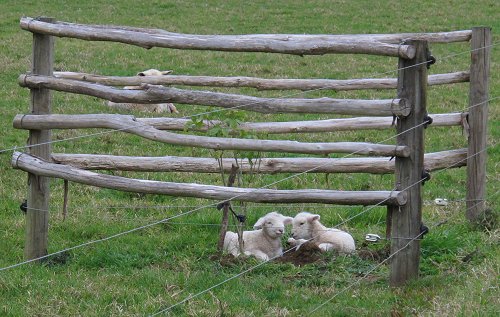 Two little lambs, sleeping on the grave of their sort-of-Uncle Damian.

There is a Puriri Tree planted there now, the earlier Pohutukawa having succumbed to its first winter's frosts.  That Puriri seedling was growing in the vegetable garden, the seed dropped from the tree outside our back door.  Hopefully it will survive. 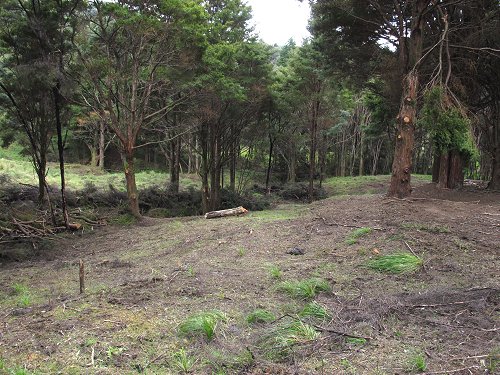 I checked the cows in the Middle Back paddock and wandered around to inspect all the work Stephan had done there.  Pruning the lower branches of the big Totara trees makes a huge difference to things.  Lots of little scrubby regrowth has also been cleared here, so with more light, we should see more grass - or more sedge, which we'll have to control so we can have more grass.

The prunings are all piled into the gullies to stop the cattle getting stuck in them.  The water will still run freely through, but we're experimenting to see if we can slow some of the scouring out of the soil in these areas. 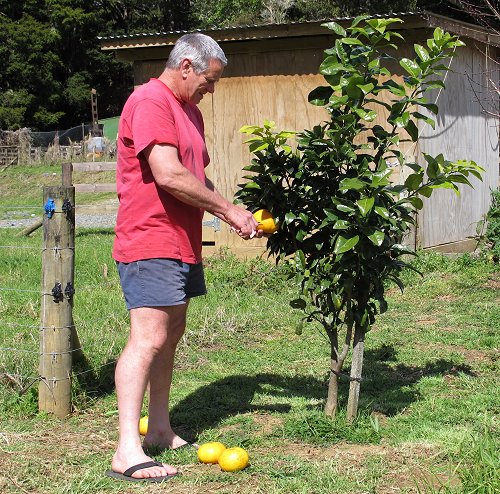 The first grapefruit on our tree have ripened enough to attract the attention of something which ate most of one of the four, so Stephan harvested the other three this morning. 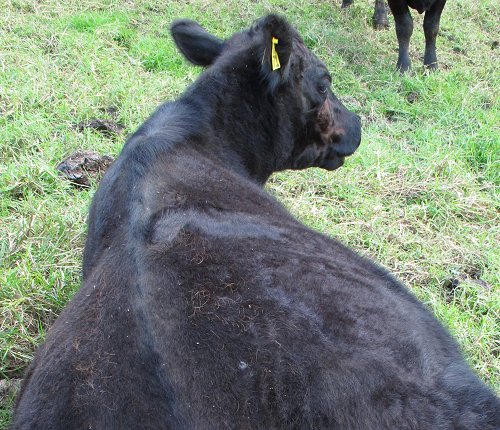 This is 571, first daughter of 456 at the top of this page, and the cow which produced her calf backwards last year.  I noticed that she has strange long sunbleached hairs growing on her back, on either side of her spine.

Watching Athena 72 in the same paddock, I could see the effects of violent kicking by her calf inside her!  It's fun seeing them moving at this stage of pregnancy.