The week beginning the 6th of August 2011.
Saturday the 6th 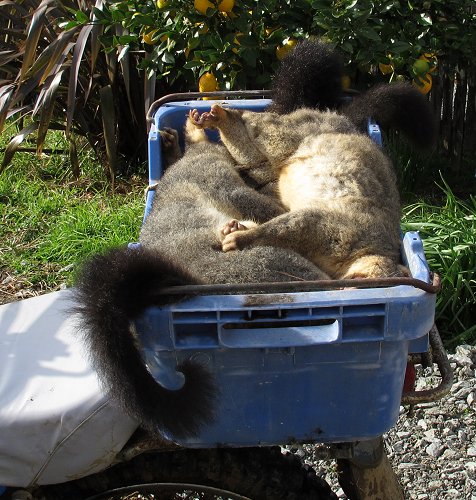 Stephan's been setting poison to kill possums, and will go out each day to pick up bodies.  It may sound rather gruesome, but they're a dreadful pest in the New Zealand environment and the toxin (cyanide) causes a quick death. 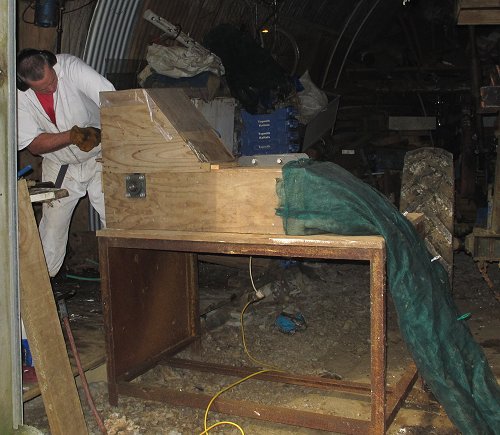 He borrowed a possum plucking machine, and set it up ready for his first experiments in plucking.  The possum is held over a set of fast spinning rubber paddles which grab the hair and pull it from the skin.  Then the fur blows out into the net to the right.  With only three possums to do, not much blew anywhere at all.

Possum fur is quite easy to pull from the skin when the possum is still warm (when one has just shot and killed one, for example) but when their bodies cool, it's very hard work to pull the fur out by hand.

Almost every part of these possums will be used: their fur is currently worth about $130/kg, and their bodies will be chopped up and used to bait traps to catch pests on Stephan's trapping runs.  He and Terry have run out of chicken, rabbit, hare and anything else they usually use, and are now having to resort to possum, which does apparently work. 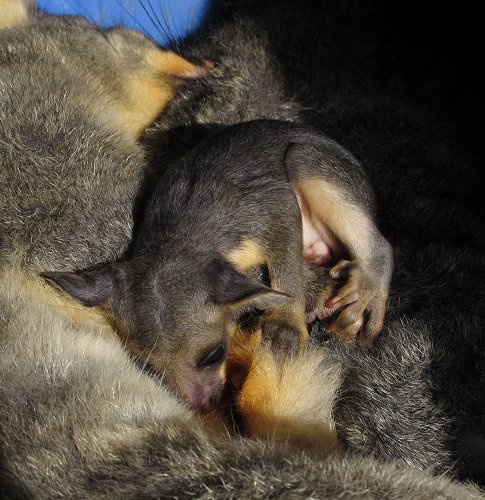 This is something to be aware of when poisoning and trapping possums: the females are often carrying a baby of some size.

This one is still reasonably young, and in two or three weeks I imagine it would have begun to ride around on its mother's back, rather than spending all its time in her pouch attached to a nipple.  This one still has its mother's long nipple in its mouth, although by now the mother was cold.  Stephan humanely dispatched the baby.  They shouldn't be left to just die. 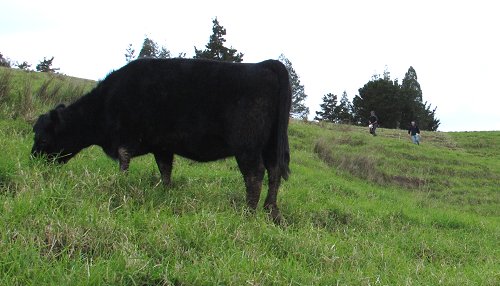 Kees and Lynn came out for a walk and dinner.  I don't recall ever taking them up the hill over the road before.

Stephan and Kees climbed up to the boundary and wound the electric tape onto the reel, collecting the standards as they walked back down, so the heifers now have two thirds of the paddock. 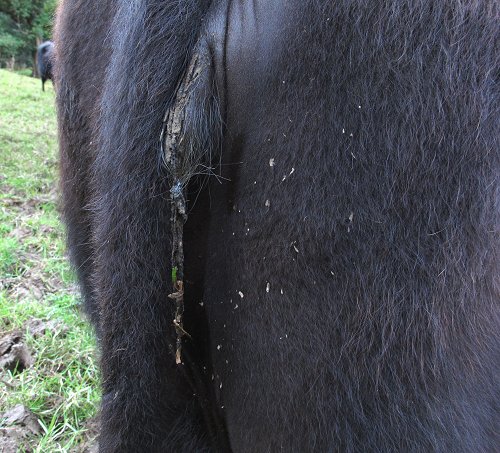 Somebody asked me what to do about something they'd seen hanging out of the back of their cow.  It occurred to me that you can see a lot of different things hanging out of cows and some of them are entirely benign, like this.  Pregnant animals produce mucous in varying amounts, usually gradually increasing as pregnancy progresses.  In cattle it often picks up dust and other debris, then dries to a sticky, then hard consistency and cements itself to the vulval hairs or the skin itself, as in this case. 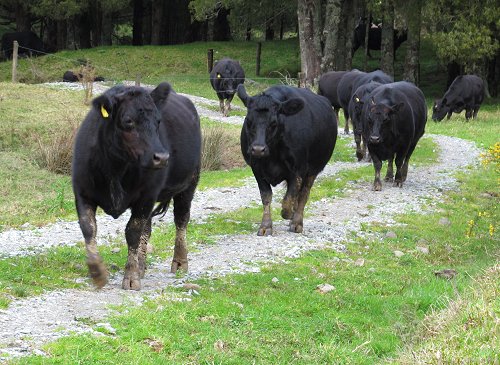 I opened a gate into the Pines Paddock, let the cows out of the Frog to go to it, and all but one of them walked straight past it and on toward the stream and the grassy area there.  After I'd coaxed a few of the stragglers into the Pines, the others noticed that there was something going on which they were missing out on, and most of them came back along the lane with that urgent sense of needing to beat everyone else there.

I spent the day getting parts of my house in order.  There are quite a lot more parts in disorder and the whole job will take quite a lot of days, probably a time-frame which will exceed my enthusiasm for the task. 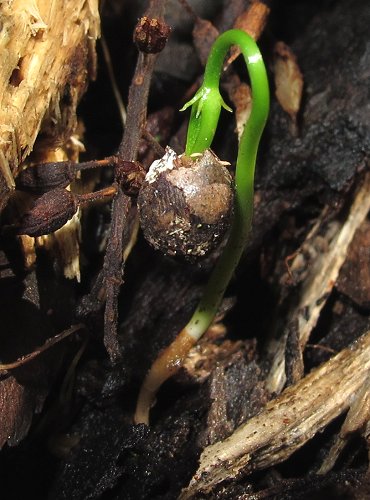 The forest floor is alive!  There are all manner of seeds germinating.  I believe this is a Kahikatea seedling. 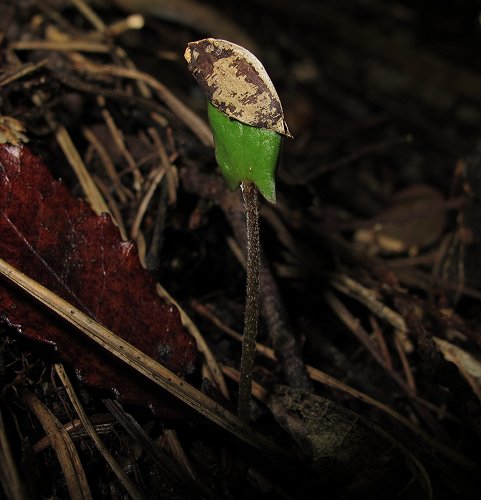 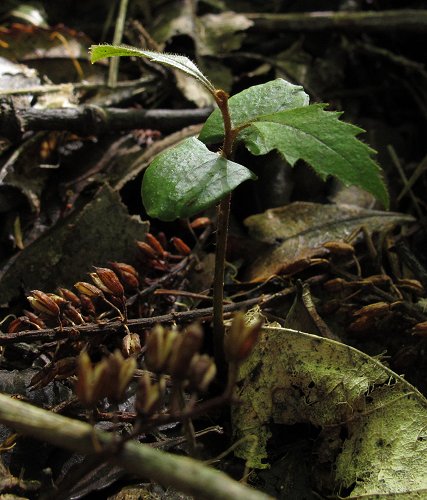 Another Rewarewa seedling, this one a bit further on in its development. 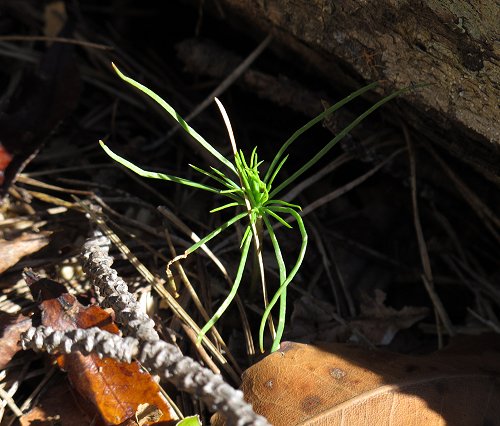 Looking around where we felled the big Pine tree, I found a few of these pine seedlings and pulled them out.  That enormous tree probably started from a stray seed, which was just this size to begin with. 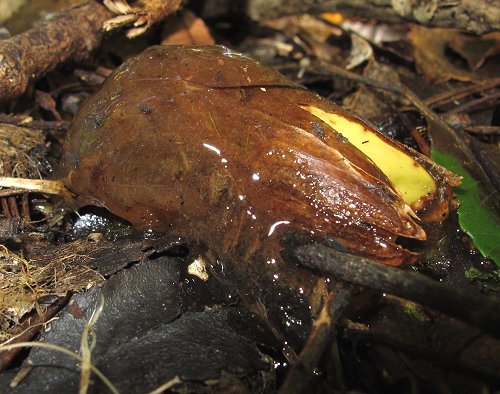 This is a Taraire seed, with its characteristic jelly.  It makes them unpleasant seeds to pick up and carry, which I did, so I can grow a few on, to plant in other locations. 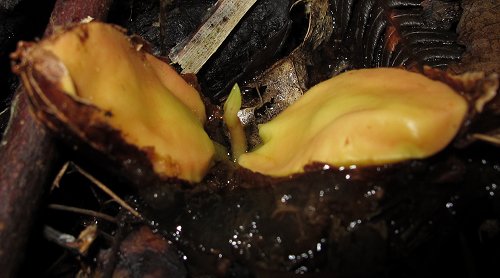 A Taraire seedling beginning its life. 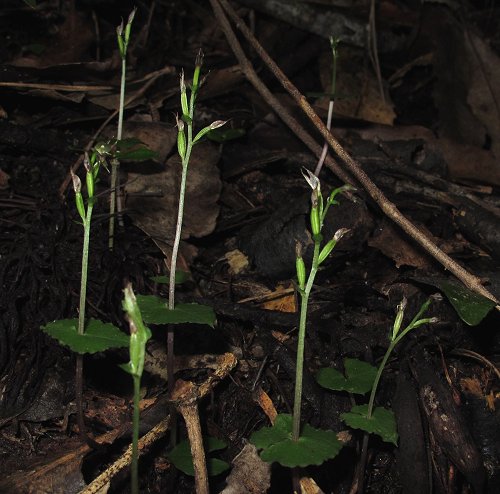 Many of the orchids I've been photographing are now fruiting, their fleshy green ovaries swelling beneath the wilted petals of the orchid flowers. 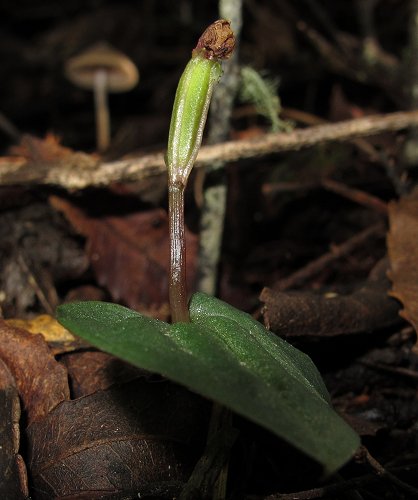 This is the ovary of the Anzybas rotundifolius. 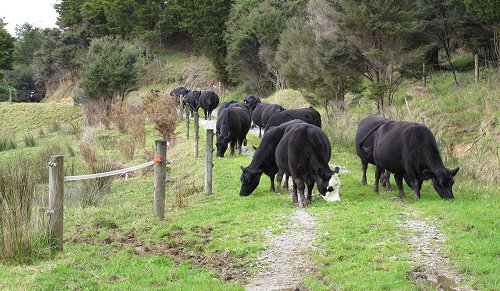 There's something quietly satisfying about leading cows from one place to another.  They quietly make their way along behind me, and I call from time to time to encourage the stragglers to keep up.

You might see 470's white face as she's rounding the corner in the left of the photo. 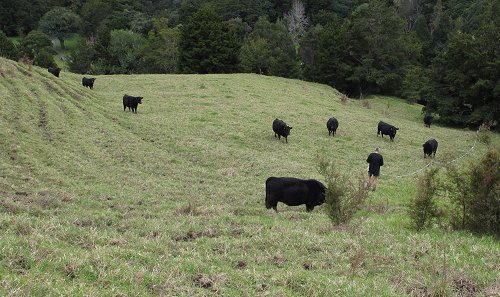 The heifers are chomping through the grass over the road, a bit quicker than I'd hoped, so we took out the last electric tape break this afternoon. 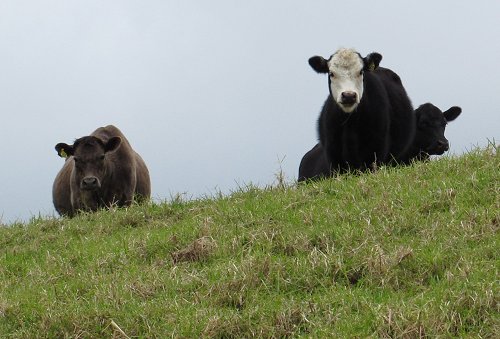 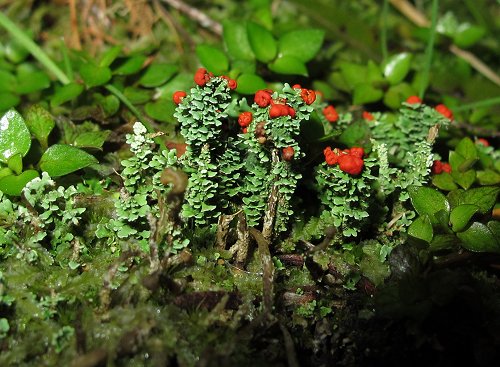 I had time for a walk out to see the cows (rather than a quick zip out on the bike) and slowly wandered back via the wetland area in the paddock we call Swamp, where we fenced off a reserve last year.  There are tiny islands of dry ground where trees are growing - Kahikatea, Kanuka and gorse - and on one of those islands I found a pretty collection of plants.

Lichen when it fruits is very colourful. 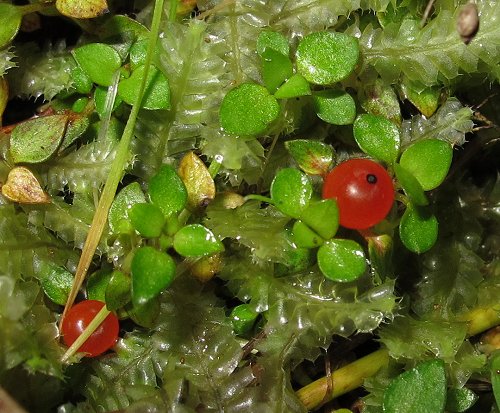 These red berries and tiny leaves are probably Nertera dichondrifolia with a leafy liverwort growing amongst it.

There were a few very small Sun Orchid plants growing on the edge of the hard soil, so I shall have to go back there and inspect them again later in the season.