I forgot, when writing the last page, to mention the arrival of some much-anticipated news.

I noticed this new plant in our pond a couple of days ago, before its floating leaves (at the top of the picture) reached the surface of the water - the submerged leaves have quite a different structure.  I worked to find out what it was, in case it's something we should quickly eliminate, but discovered it is the native Potamogeton cheesemanii. 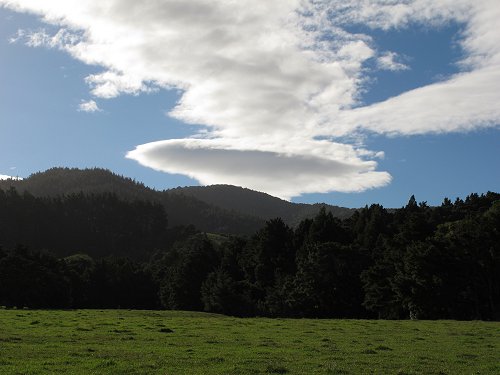 I was struck by the appearance of this cloud over Puketutu as I rode out to check the cattle this afternoon. 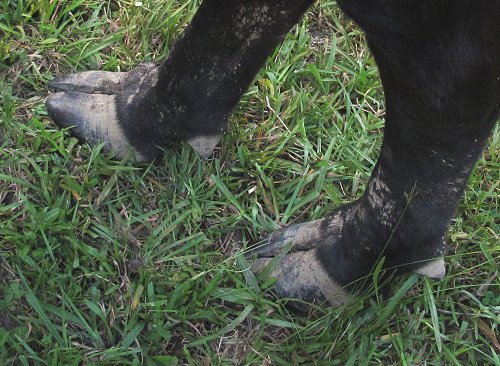 601 has horrible feet!  I had hoped she'd avoid following in her mother's footsteps in this regard, but I suspect she may have inherited a bit of it from her sire as well, since Queenly 09, her great aunt, had a son with overly long toes.

601 is a carrier of the NH gene, so I've had to test her calves each year (at $50 a time).  Last year's daughter was a carrier, so she's gone off to grow up to be beef, not a breeding heifer; this year's daughter, 714, has tested NHF, free from the defect, so I'm tempted to keep her and cull her mother.

Another cow added herself to the cull list this afternoon: Dexie 46 was standing to be ridden by 545.  I saw Dexie with the bull twice, but obviously she did not get in calf.  Dexie 46 is AMC, a carrier of the AM defect but her daughter Dexie 101 tested clear of the gene last year.  Now that I have a clear daughter, I think it's time to let Dexie 46 go. 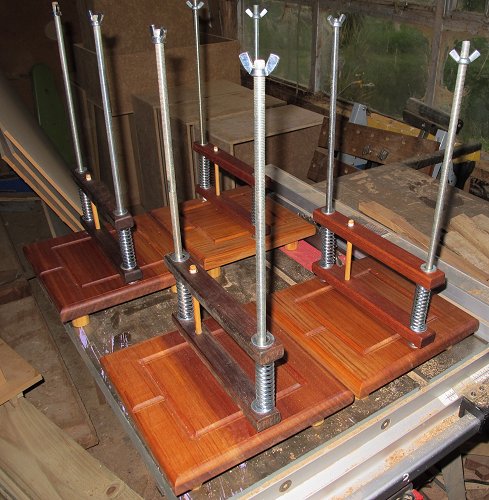 Stephan's been making cheese presses for friends Peter and Lilo, which they sell through their Cottage Crafts website. 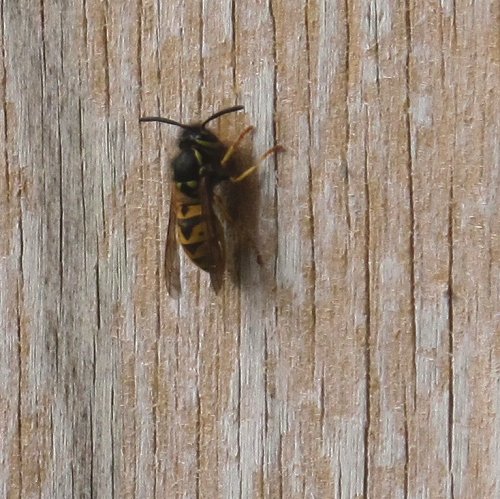 Everywhere there is unpainted wood, including treated timbers, wasps are harvesting wood fibre for their nests.  The mottled colour of this plywood shows where wasps have already been working - the light grey is the weathered appearance and the browner colour is where the wasps have removed the surface.

I walk up and down various parts of this hill every afternoon, checking on all the animals to ensure nobody's fallen in a hole and that none of the cows are on heat.  (The cow in the foreground is 601.)

Stephan will obviously need to walk up and down here with the gorse spraying hose before the end of summer! 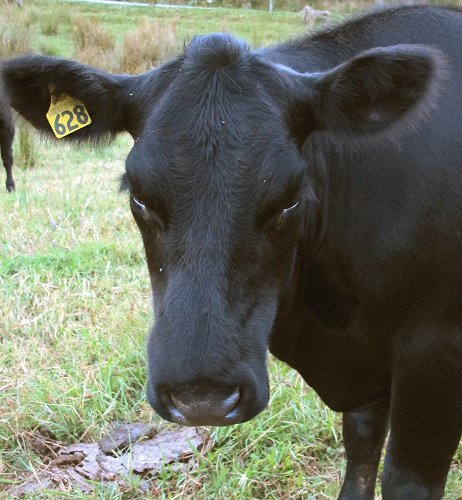 I think 628 may have encountered a bee.  The right side of her nose was quite distorted by a large lump.  I wasn't sure what was wrong with her, but hoped it was something simple like that, because the swelling had appeared so suddenly.  She was chewing her cud and I saw her lick her calf a bit, so she didn't seem to be in pain. 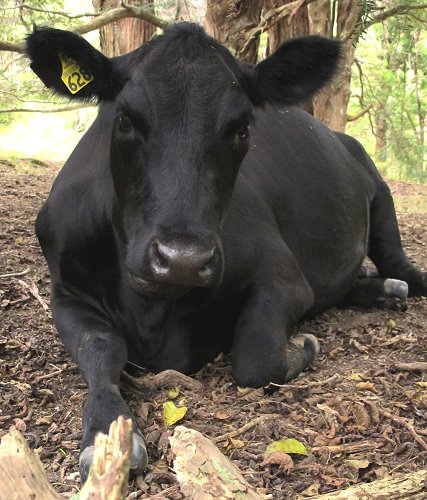 It took me a while to find 628 this morning, tucked away under a tree on a hillside away from most of the others.  She's fine, with a normal-looking nose again. 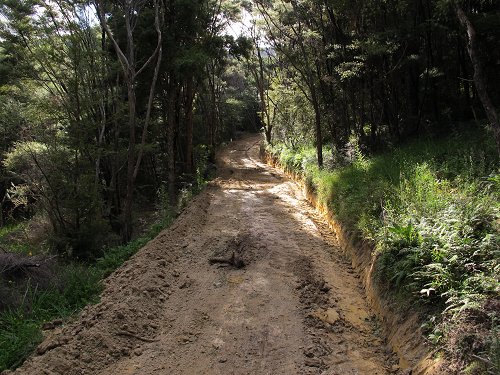 Before me, a new road!

Four of us were out walking, as we took our just-arrived visitors L-J and Fran for a walk around some of the farm.

Stephan created a track here during last summer, to get some firewood out of the area he cleared for the wetland conservation fencing and this summer he needs to get back in again to collect the rest.  The wood was all cut the year before, so by now will be beautifully dry for the coming winter.

I had a close look at 108, the calf we had to treat with Penicillin recently, to make sure his castration wound has continued to resolve and noticed that it is still weeping a little pus (as it has done for the last two or three days).  I'm not overly concerned, because he remains in good health and if the remaining wound is able to drain, it will probably heal faster than it would otherwise.  I specifically check on him each day to watch for signs of infection.

Our apples, all three varieties on that tree, are starting to look very appealing!  The Peach tree behind it has a lot of fruit too. 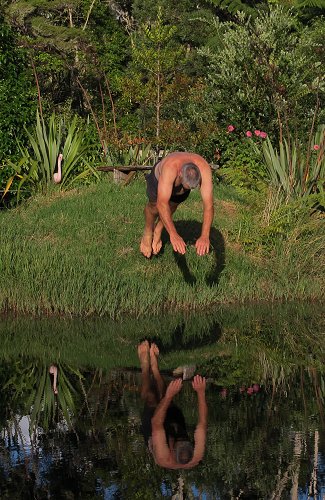 There's a Flamingo nesting on the Island (in the Flax bush on the left).

There's a man flying over the pond.

The Kauri tree in the centre looks very healthy, although there's a little sap leaking around the base of the trunk.  I am crossing my fingers that it's not a sign that we have Kauri Dieback here now but rather that Stephan might have accidentally passed a little too close with the grass cutter. 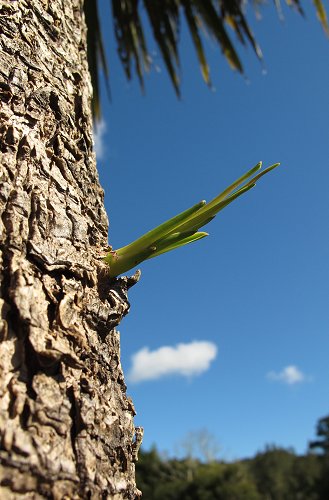 What makes a Cabbage Tree suddenly do this?  It has been really interesting watching the two trees by our deck, seeing when and why their crowns have split and now to see this new growth straight out of the trunk.

Fran and L-J went up to the Cape today on what turned out to be an extremely hot day.  I was tempted to go along for the ride, but decided that several hours in a car was not quite my best option for the day, regardless of the promise of great company. 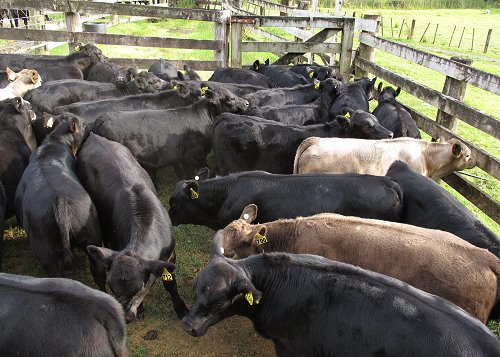 When our guests had come home and the day had cooled a little, we got the cows and calves in and weighed all the calves again.  They were all in this pen together, but I couldn't quite fit them all in one picture.

The pressing reason for getting them in today was the arrival of an email this afternoon with the results of 110's test for the AM gene, showing that he is a carrier.  Damn.  We got the elastrator and rubber ring ready for when he came up the race.  His testes are just small enough for him to be effectively and humanely castrated by that method, but wouldn't be for much longer.  I'll have to check him regularly over the next few days to ensure we've done a good job.

Not counting Abigail's December-born son, the calves now average 193kg ranging from 155 to 271kg.  The huge calf is 548's and the next heaviest calf is 236kg.  Their daily growth rates are around 1.2kg, which is very satisfactory.