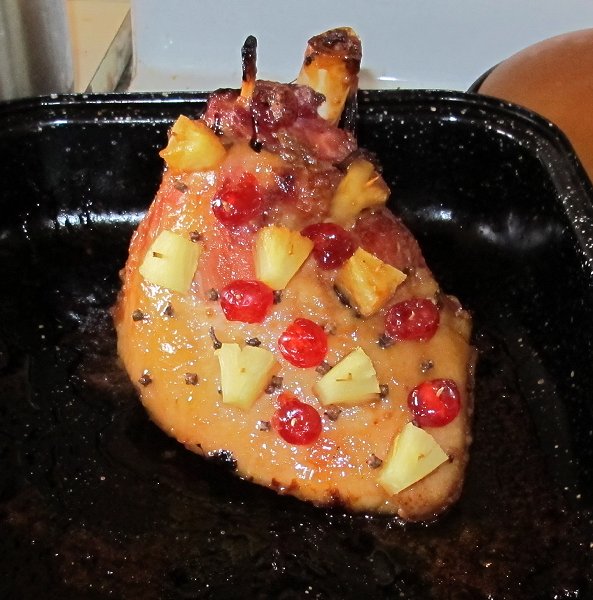 We were expecting a guest this weekend but when she suddenly couldn't come, the ham Stephan had out of the freezer was already thawing so we had to eat it all ourselves.  We did not feel hard done-by, but we were sorry not to have had the company of our visitor. 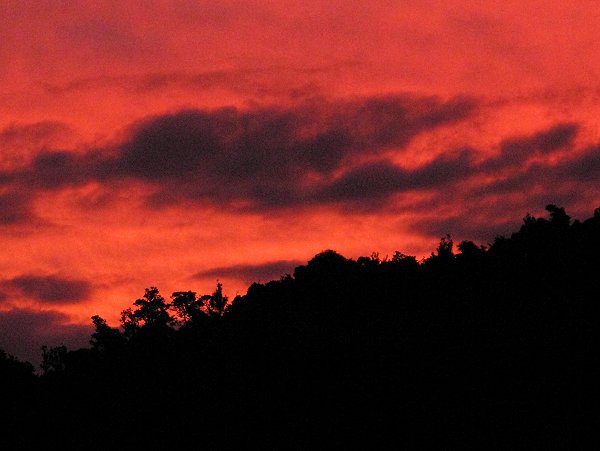 The strange colour of the light over the pond made me look back to the south to see this stunning sky.

I like being able to see those ancient trees on the skyline.  I need only turn my head to the left as I sit writing at the computer, to see them across the flats. 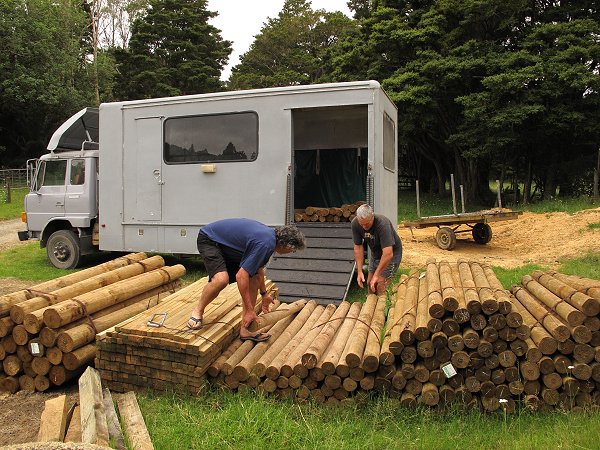 When we had the fence-posts delivered, they included a bundle for Kees and Lynn, who came today with their truck to collect them. 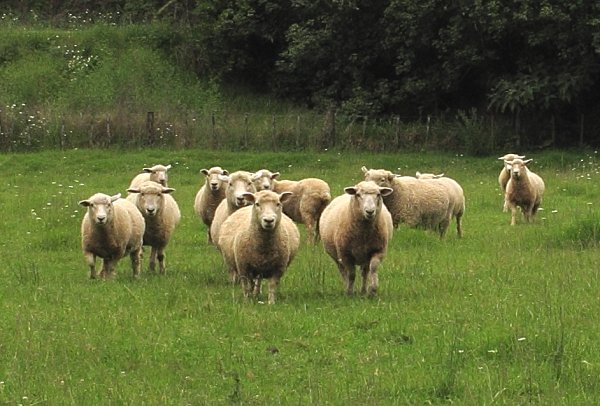 Sheep are so trusting.  Fourteen ran in to the yards and only twelve ran out and they'll still come in next time.

We arranged with Sniff, our lovely butcher, to make sausages out of the little nearly-ram and to chop up a mutton at the same time.  This is why we have these sheep and there are still too many of them in the flock.  The mutton animals are now two and a half years old, so they need to be eaten soon, before they get much older.  The last lambs are big enough to eat as well, with a few of them having already been eaten, when lamb/hogget has been required. 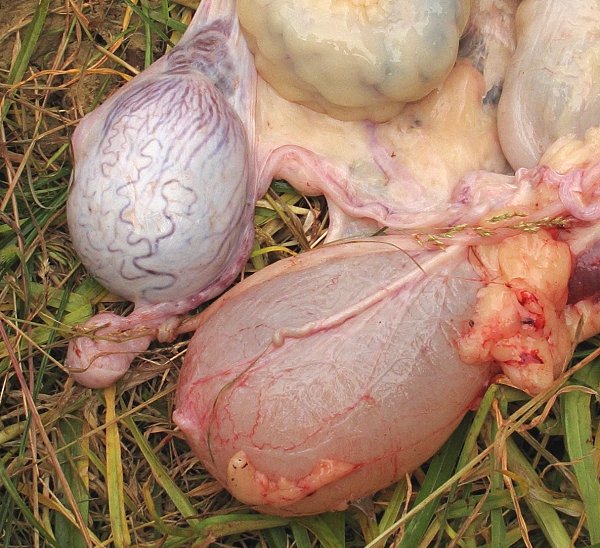 The missing testicle (on the left) of the cryptorchid wether/ram.  When this sheep was a lamb, I could only ever find one testicle when I was preparing to castrate him.  We left him to grow for a while, hoping the other would come down, but it never did.  Eventually I put a ring on him with only the one in his scrotum, which at least made him infertile, but his behaviour as he's matured has shown there was definitely still a source of testosterone in him somewhere and here it is.

Pictured are his testicle on the left and bladder on the right.  The testicle is far smaller than would be normal, so not descending into the scrotum was not its only oddity.

I'm aware the sight of such innards may disturb some sensitive readers, but isn't it interesting that there's never as much blood as you might have imagined there would be?

We brought the 15 animals from over the road back to this side this evening, so I could weigh the heifers in the morning.  I want to know how many of them have reached minimum mating weight.

It rained this morning and the battery we use for the cattle scales would no longer charge up, so I had to give up on the cattle-weighing plan and take them out the back to graze instead.  We'll need to buy another battery.  The display has an internal battery, but it's never been very long-lasting in use so we've always attached a small gel battery by a cord, to provide reliable power. 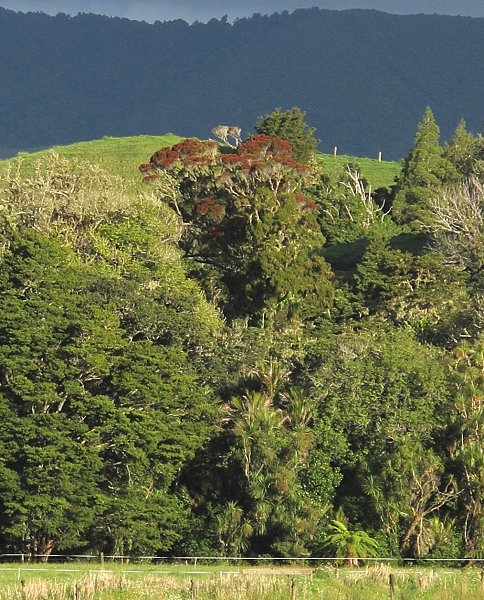 We had a useful 20mm of rain over night and drizzle until 11am.

At noon we went to town and, among other things, picked up the semen bank I use when inseminating cows.  The semen I bought this year was still in a bank in Mangatoetoe Road at Fairburn, so we went there next and collected it and brought the whole lot home.  Everything is ready to go.

The air temperatures are very warm, much more like the summers I remember as a child, than those we've had for the last many years.  It hasn't been hot really early in December for a long time.  So far this has been an excellent summer, after such a cold and unpromising spring. 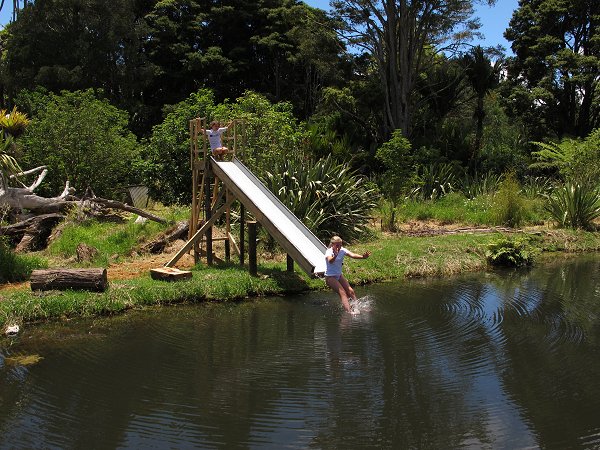 Sniff brought the meat and sausages round this afternoon, with his daughter and a friend already in their togs (swimming costumes) and itching to try out our water-slide.

There was some trepidation before the first go, but then it was all on and they were down the slide, across the pond, up onto the jetty and running back around in a continual stream of dripping excitement.

I told them they'd go faster down the slide without togs on and they gradually cast off their clothes and by the end of their visit were both nude sliders!  They were lots of fun to watch, having such a good time. 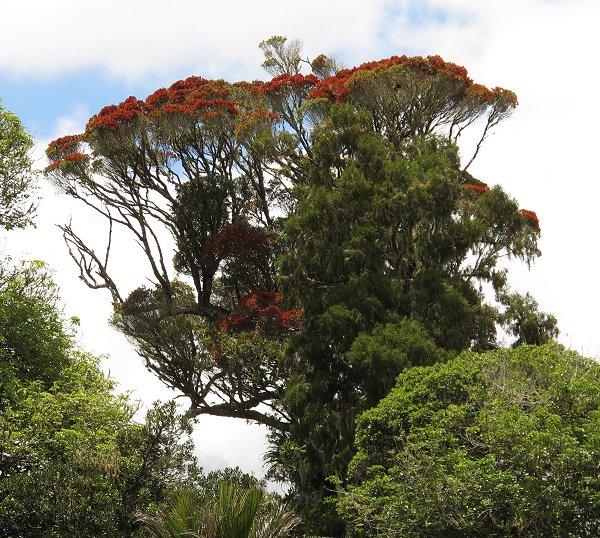 I urged Stephan to make some more tractor inquiries today.  The old tractor still goes, but the sort of work we expect it to do means that it's starting to suffer from physical stress and keeps needing to have things fixed.  It needs to be retired to an easier life.

We spent some weeks setting up a deal on a nice little tractor owned by an acquaintance, but in the end the man decided not to sell it, just when we thought all that remained was to settle the price.  Good second-hand tractors of the size we need are very hard to find.

We have a number of reasons for not being particularly comfortable about using the local tractor merchants, so Stephan phoned a similar vendor in Whangarei and was referred to a man in Kaikohe.  If we buy new, most deals come with financing options - and you know they do want to sell!

When the Kaikohe man returned our call, I spoke to him and he said he would come and see us this afternoon, since he had to come north anyway.  After getting lost a couple of times, John eventually arrived and we talked through the possibilities with him, deciding on the appropriate tractor model and the arrangements which could be made to purchase it.  We are going ahead! 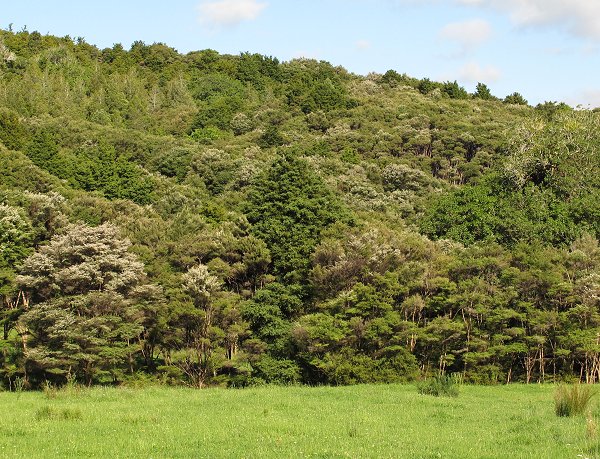 The Kanuka trees are in flower, giving the bush canopy lovely highlights.

The flowers are much smaller than the Manuka blooms.  I'll have to find a low tree and get some close photos.

I brought the heifers in from out the back to weigh them and put Kamar heat detectors on their backs.  They range in weight from 374kg (the lovely 701, first-born last year) to a puny 283kg (Squiggles' suddenly poor-looking daughter).  The rest of them are between 320 and 345kg, except Demelza's daughter 115, who was only 312kg, but I'll let her sneak through for mating.  Squiggles' daughter looks like an animal under stress.  She's been regularly cycling for months, so in terms of fertility she's ready, but her weight and condition will eliminate her from mating this season.  I don't think she's unwell, but she's certainly not doing well at present.

Twins Gem and Meg are still jumpy, flighty heifers and I had to get Meg 699 up the race a second time, with Curly in front of her, because she tried to jump over the rails the first time around.  I'm only persisting with them because they're identical twins.  If they don't quieten considerably in the next few months, I'll have to reconsider.  Putting aside their behaviour, I am delighted with their growth, weighing 344kg and 338kg respectively.

Most of the cows had their indicators applied (they're glued on to their tail-head area) while they stood around waiting by the house.  It's very convenient, having such placid cows.  The heifers should be equally quiet by the time they're adults. 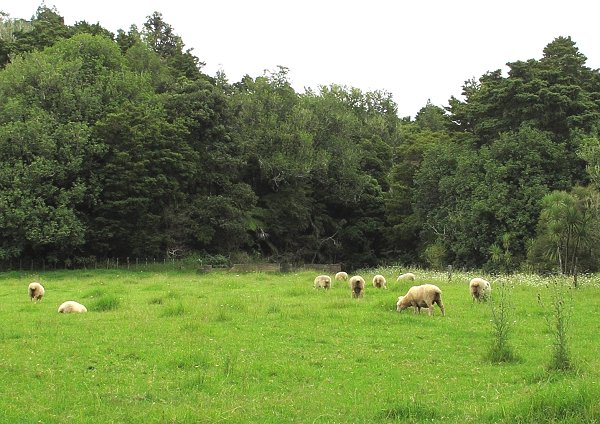 Twelve sheep in the Pig Paddock: still too many.

I'd planned to start the cattle mating period yesterday, but was disinclined to work hard enough.  Today I weighed all the calves (except the housecow mob of two calves), although rain interrupted the job for a while.  I wore my cricket shin-pads while pushing the calves up the race, in case anyone kicked me.  I bought them a few years ago for that job and they're very reassuring, even though they're hot to wear and make climbing over the rails a bit of a cumbersome task.

When both mobs of calves were weighed, I drafted the cows into their mating groups.  All the heifers are to be inseminated; several of the pedigree cows have semen bought for them, to bring some different blood-lines into the herd; many of the cows have not yet produced a daughter with Joe 90, so they're going off with him.  When the calves have had their vaccinations and NAIT tags, I'll split the bull mob up a bit more, sending a small group of cull cows (those I probably won't keep after weaning) out with the youngest bull, #116, and those which have by then been inseminated, I'll give to bull #106.

I spent quite a lot of time trying to work out a budget, cash-flow, how much we earn and spend each year, to decide whether or not we could safely enter into the tractor deal.  It looks like we will, like some countries, need to adopt budgetary measures of extreme austerity.  We do not have a very high income, being made up only of Stephan's trapping, my writing and website work and the income from the cattle.  While the farm business subsidises some things like the rates and a bit of electricity and communications, and we have the ability to produce some of our own foods, our disposable income is comparatively small.  It is beyond adequate for the way we normally live, but that is primarily because we choose not to be voracious consumers.