The week beginning the 22nd of September 2012.
Saturday the 22nd 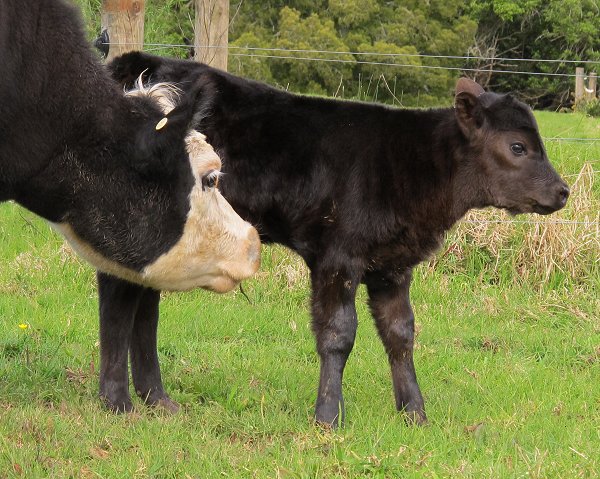 660 and her calf appear to be doing well. 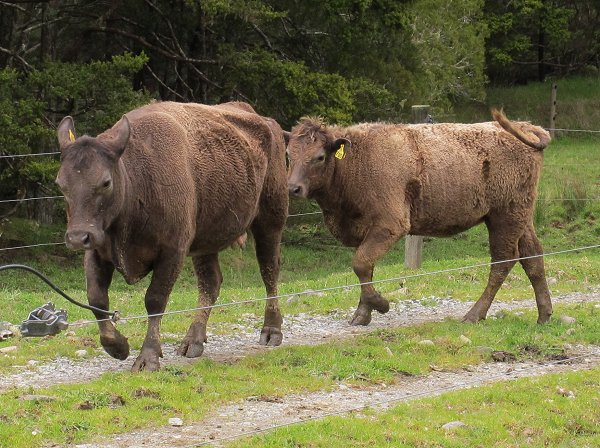 Curly (who isn't in calf, but I couldn't bring myself to send her off on a truck this year) and her daughter, Endberly.  Cows which produce calves from two-years-old, get a second chance if they miss a year here.  Besides, Curly was Stella's favourite, so how could I send her away?

I sent the heifers out to join the two empty cows (528 is the other one) and they all went up into the PW.  The grass must surely be growing a bit by now, so they'll be alright in there for a bit, out of the way. 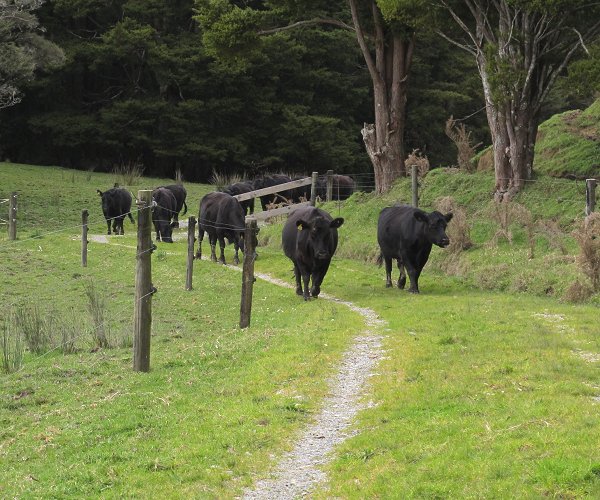 I drafted five cows out of the main mob this afternoon, so I can give them Magnesium every day and keep an eye on them easily on the flats.  They all have advanced udder development, beyond that which I expect for their calculated gestation.  I am suspicious and would prefer they didn't surprise me with calves out the back somewhere.

The rest of the cows (21 of them) weren't that happy about their mates being offered nice grass while they were drafted out into the lane.  With a bit of calling they did slowly follow me, but were quite unwilling until we'd passed the Frog Paddock, from which they'd come last night.  I think they thought I was taking them back there again and they were not happy!

They followed me all the way out to the Back Barn, then through that paddock, across the stream, up a track around the back, to the gateway to the Middle Back.  I wrote all the numbers down as the cows passed me through the gate, counting 19.  Ranu 31, who's often last, and Eva, who also frustrates me by not turning up when she's supposed to, were not there.  They eventually figured out where everyone else had gone and found their way to the gate, which I shut behind them.

Cows are interesting to watch when they're left on their own.  They track where the others have gone by scent, so as they walk they regularly put their heads down to sniff the track they're taking, to ensure they're still going where the rest have already been. 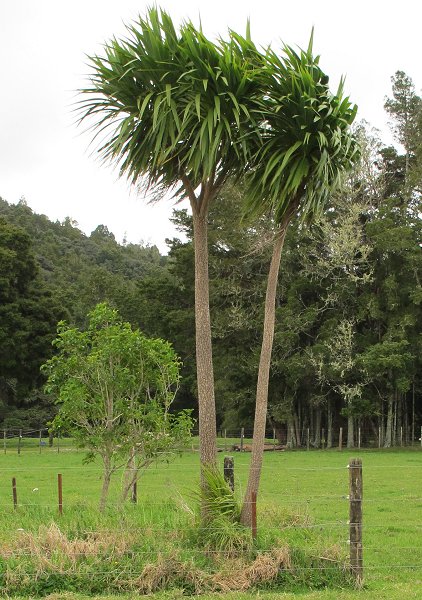 It appears to be throwing out another shoot, or there's a seedling growing at its base.

The Puriri, which was planted at the same time, has never done very well.  It was one dug out from another location and has never been a happy tree.

Stephan finally came home, arriving just after 9pm.  I asked him to cook me dinner.  Eight days, he's been away; unbelievable neglect! 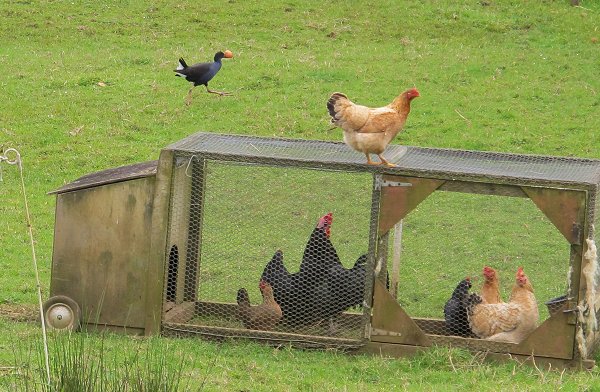 Somehow the egg-box end door of the other chicken cage fell open.  The hens got out, which doesn't matter very much, but the thing which attracted our attention was this opportunistic Pukeko making off with one of the eggs!

The bird (or one of its mates) came back again after stashing the first egg to have a look for another one.

I think we can spare an egg.  We have about five or six dozen to eat, so omelettes are on the menu this week.

It would have been nice to get a birth-weight on this tiny calf - probably no more than 22kg - so I can measure how fast she's growing.  I'll settle for watching her being content and getting bigger.  I'll weigh her when she has some other little friends to walk with to the yards. 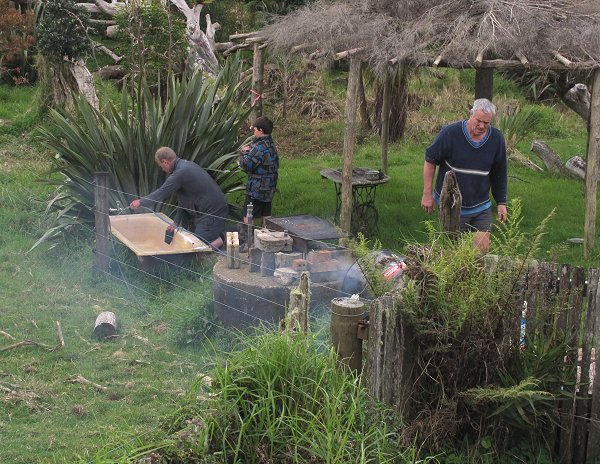 Cousin Doug and Tomas (with whom we stayed near Queenstown) came out to stay for a night, after spending several days in town with Doug's sister, Christina.

They decided an outside bath would be a nice idea, so cleaned out the collected grime and leaves and Stephan lit the fire and filled up the hot-water drum. 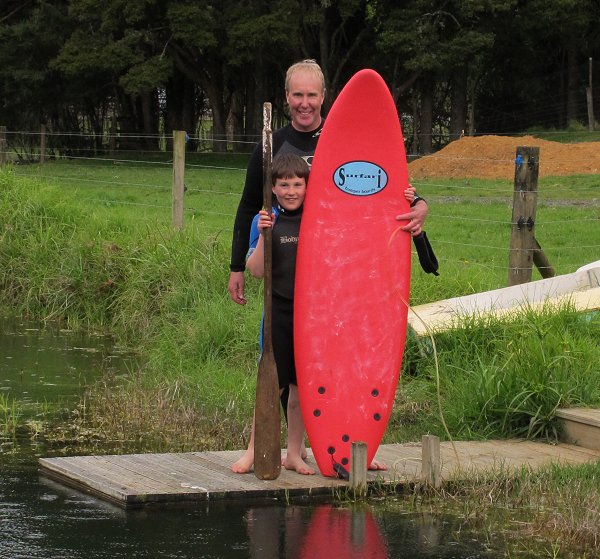 Stephan chickened out of the swim.  These two had wet-suits, which would have insulated them from the cold.  There wasn't a lot of surf. 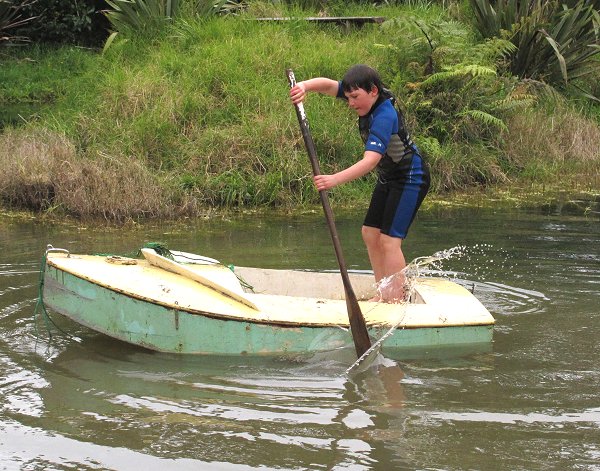 The leaky boat stayed afloat for long enough for Tomas to have a bit of fun in it. 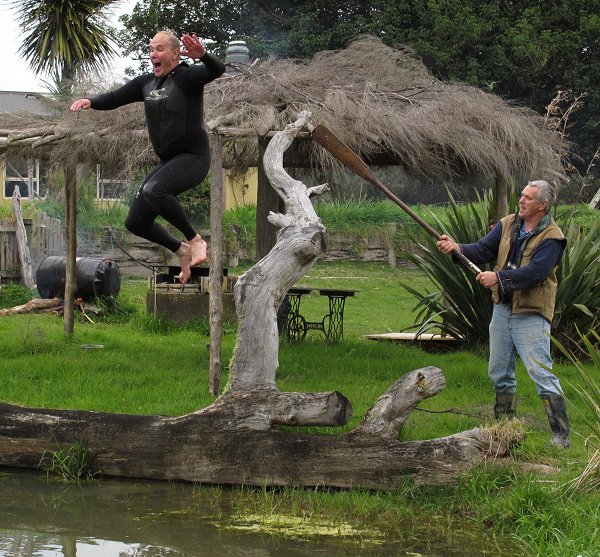 If you hit it hard enough, it'll go a long way!

(No actual violence was performed, nor anybody harmed in the production of this photograph.) 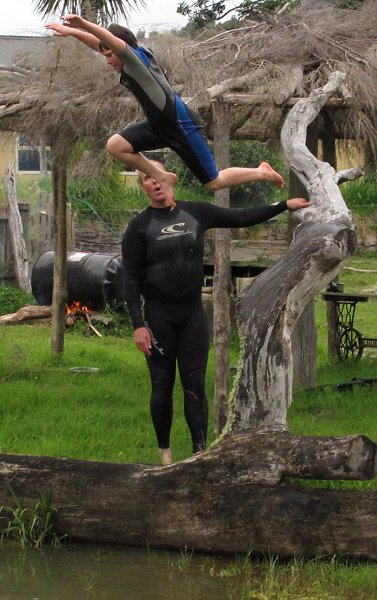 Tomas was keen to have a go too. 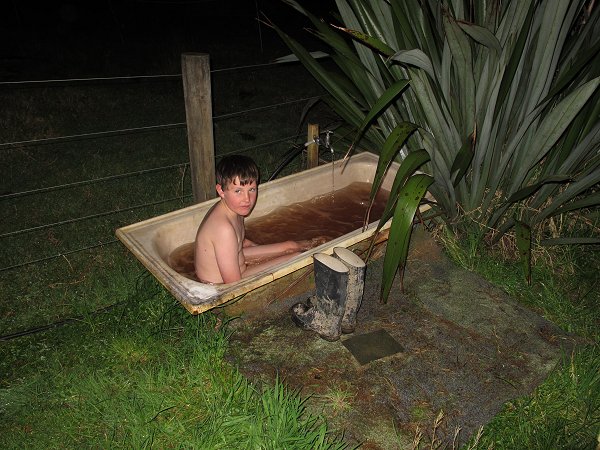 After dinner (roast mutton from the birthday party in May) Tomas and Doug ran the bath and had a lovely soak - with a short intermission, as Tomas jumped into the pond for a quick freeze.

Two weeks ago I posted a picture of some trees whose identity I've wondered about for some time.  A helpful correspondent suggested Tawa (Beilschmiedia tawa) and confirmed that these pictures look like Tawa is the answer.  Thank you, Gary. 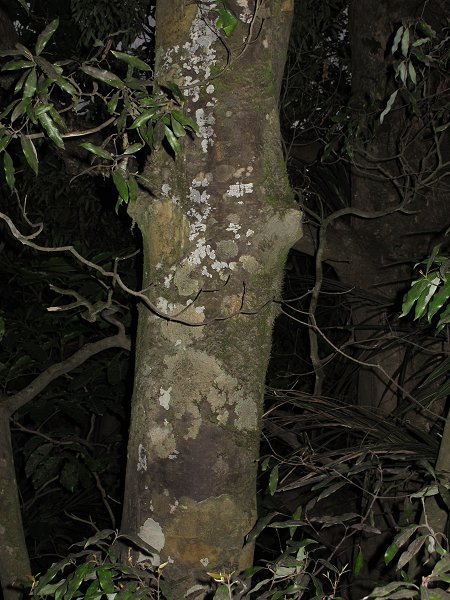 One of the trees' trunks. 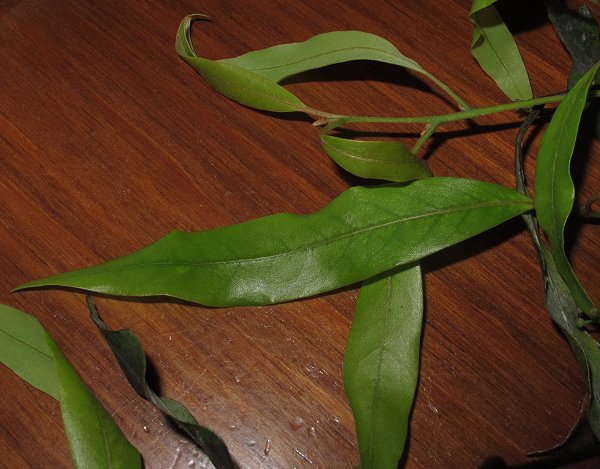 A close-up of a new leaf. 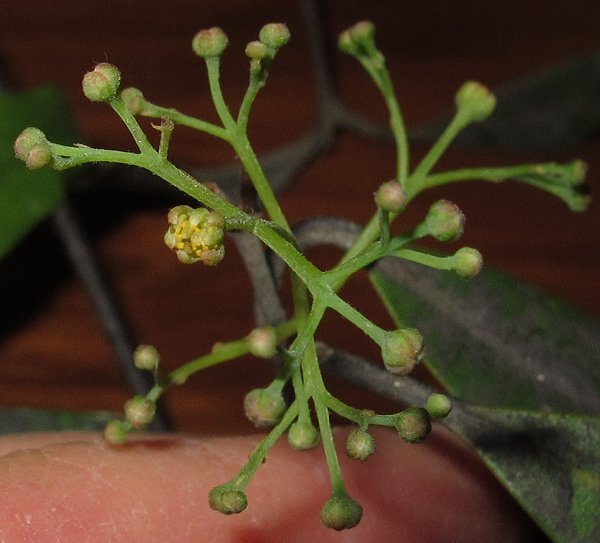 A flower panicle with one flower fully open.

It's nice to identify another species I didn't realise was here. 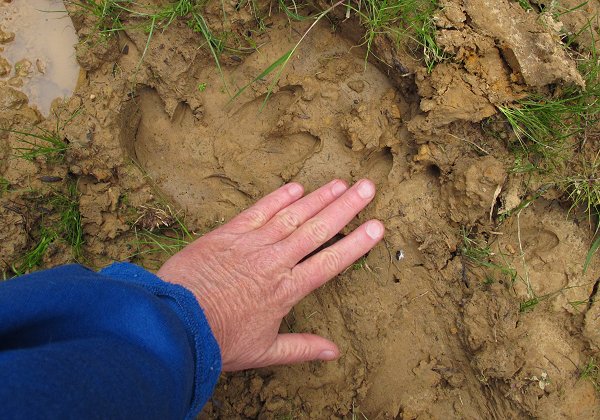 Walking up through the Big Back to check on the cows over in the Middle Back paddock, I noticed a large number of pig foot-prints, from these big ones right down to those of tiny piglets.  Maybe they're eating all the grass I don't seem to have.

This print belongs to a fairly sizeable pig. 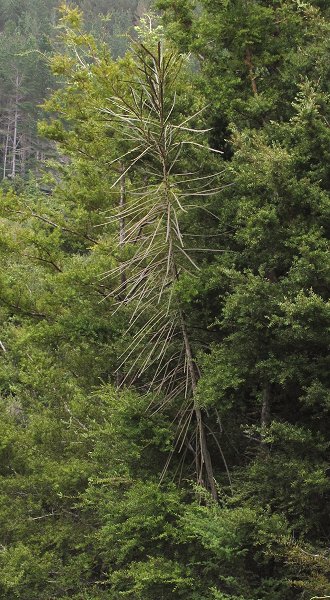 A juvenile Lancewood (Pseudopanax crassifolius), beginning to change into its adult form.  The juvenile plant's leaves all hang down.  The adult's are broader, shorter leaves, growing upwards.

While I was out walking, Stephan went to town and then the airport to collect Ella from the plane.  This time she's to stay for six nights.  She must be growing up and getting braver. 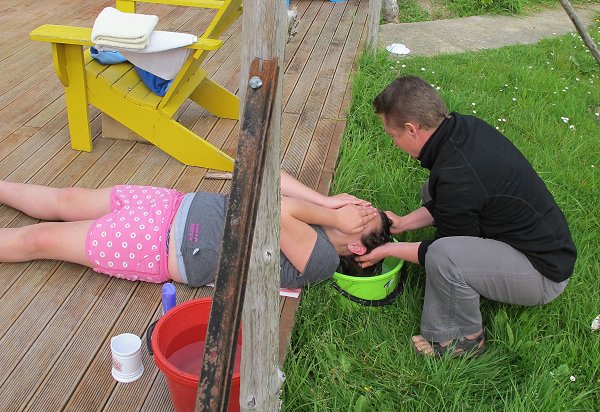 Ella has a most interesting hair style, closely resembling a rats' nest at the back of her head!  Somebody hasn't been brushing her hair properly for some time and it's obviously got well out of control!

I tried working on it for a while, but then decided a wash and some conditioner to comb through might be the answer.  It wasn't, but being cleaner and silkier did help a bit. 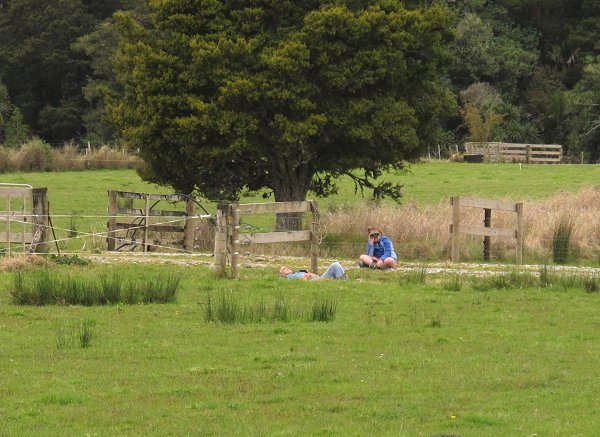 Dinky 94, daughter of Abigail, was in labour, so I called Ella and Stephan on the radio and suggested they came to watch.  They waited for a long time and although we could see front feet and a tongue, they didn't seem to be moving a lot. 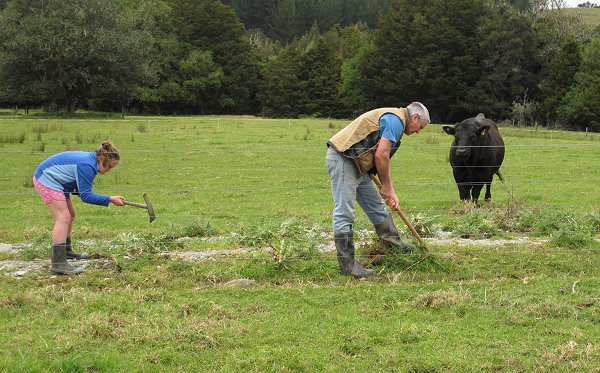 To pass the time, Ella and Stephan chipped thistles on the track and even went into the bush to check for dead possums, killed by the poison Stephan laid a few days ago. 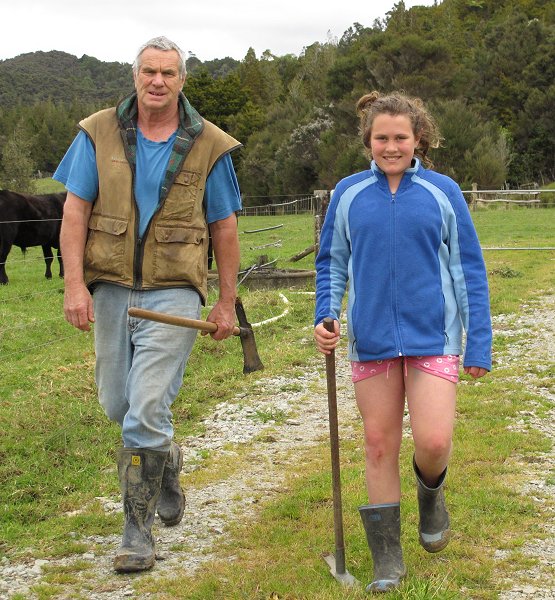 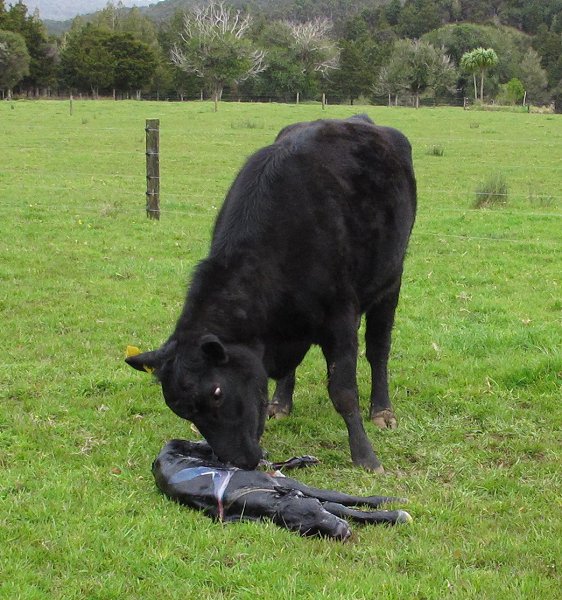 Ella and Stephan went off out the back of the farm to check some traps and Dinky promptly had her calf.  As I watched, the head jolted forward, as if something which had been stuck for a while had finally given way and the calf was born very smoothly and easily.  This one was born at 270 days' gestation.  No wonder these calves are little! 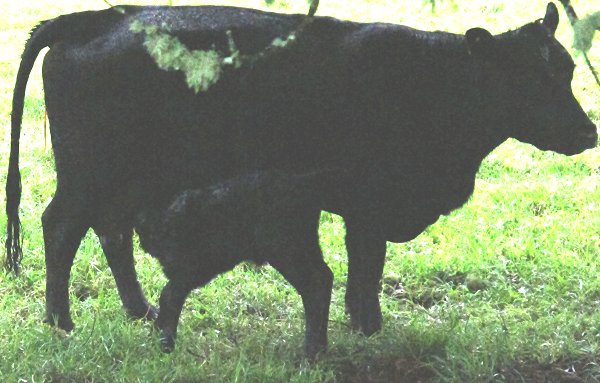 Athena looked pensive last evening at dusk, but relaxed when I checked at 10pm.  This morning she was quietly feeding her new daughter. 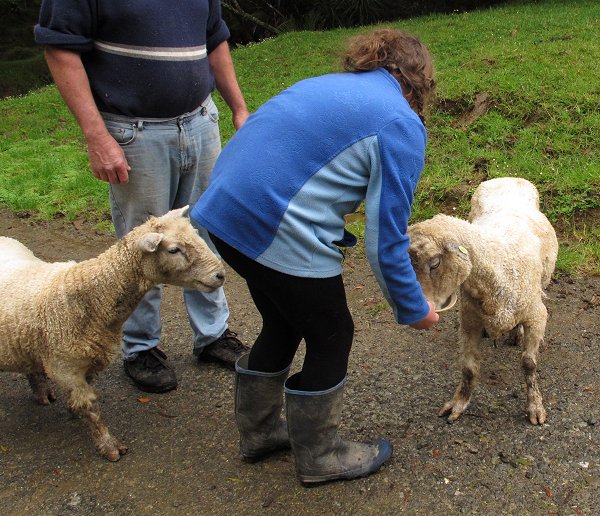 We moved the sheep and Ella fed Yvette her daily feed-nuts, skilfully keeping Lamb's face out of the bowl. 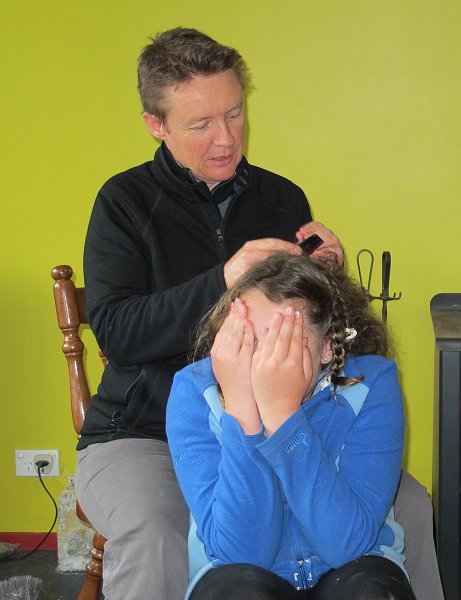 Time for some more hair teasing.  It would have taken weeks to pull it all apart, so I chopped into the mat, dividing it into quarters, which made it possible to pull the hair free.  A lot ended up on the floor and I wasn't quite sure how long her hair would be at the end of the process.

We worked on it for several hours all together.  Ella had to put up with quite a bit of accidental pulling, since it was often unclear which end of strands of hair were attached to her head and which ends to the mat.  Eventually I could pull a comb through the whole lot, so applied water to de-frizz the bits which had been most tangled, and the end result was quite pleasing - lots of length still, although there will be short bits all the way through it.

A hair-dresser would presumably have cut it short, because of the time involved in untangling it, but little girls all seem to want to have long hair, so that wouldn't have done at all. 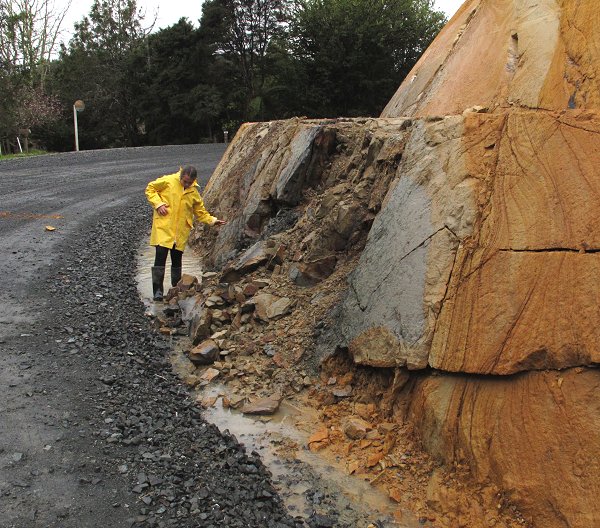 Ella and I went for a walk around to see the heifers and have a look at the corner, including investigating the cracks and the slumped bits. 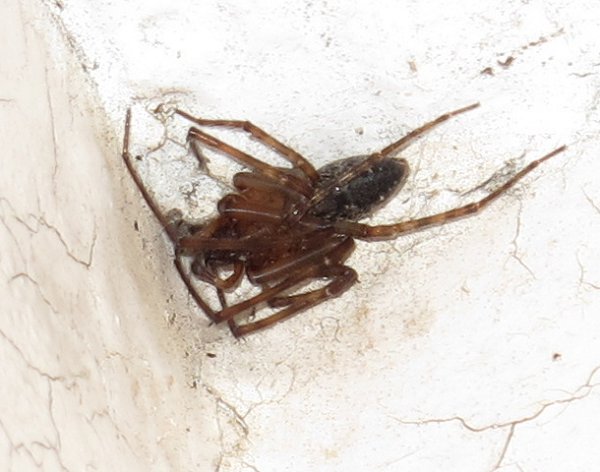 A new spider has appeared in the bathroom: a sheet-web spider, so perhaps it will stay and make a huge web like our former spider friend. 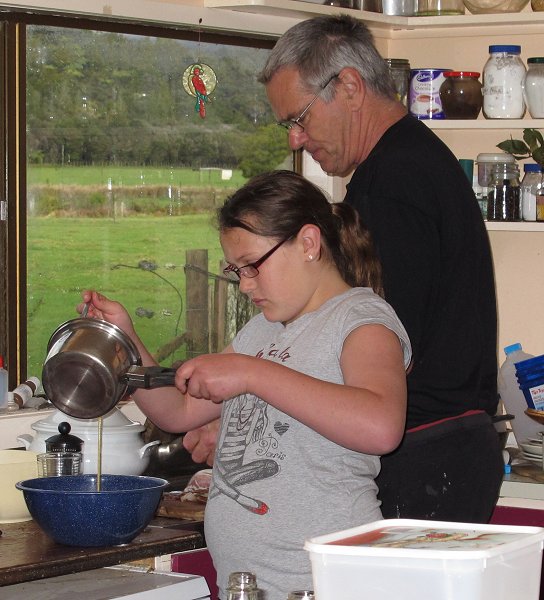 Ella and Stephan cooked ANZAC biscuits for morning tea, because Kees was coming out to help Stephan repair the tractor.

Ella came out with me to move the cows from the Big Back paddock to the Small Hill.  Twenty of them showed up: 548 was missing again.  I decided to shut the others into the new paddock and leave the Big Back open to the lane, where 548 could graze and find water, whenever she came down out of the paddock.  I will move them again tomorrow, drafting out another few of the expected soon-to-be-calving cows. 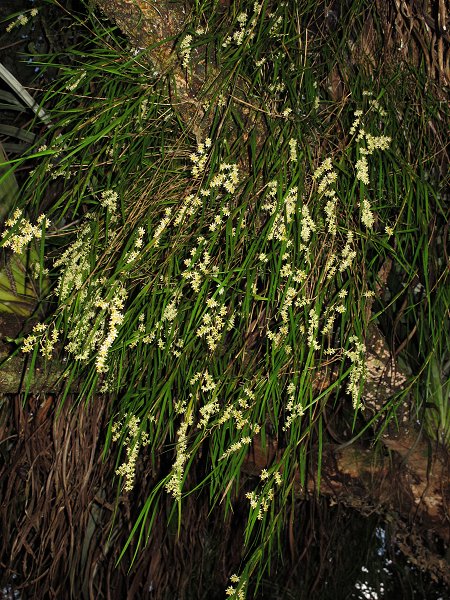 Earina mucronata.  I noticed some of these orchids flowering in profusion on the side of the road through the Mangamuka Gorge back on the 10th of September, so have been watching these ones.  Three or four days ago, they were not yet blooming.

They're all above my head, so photography this afternoon in a stiff breeze, was challenging. 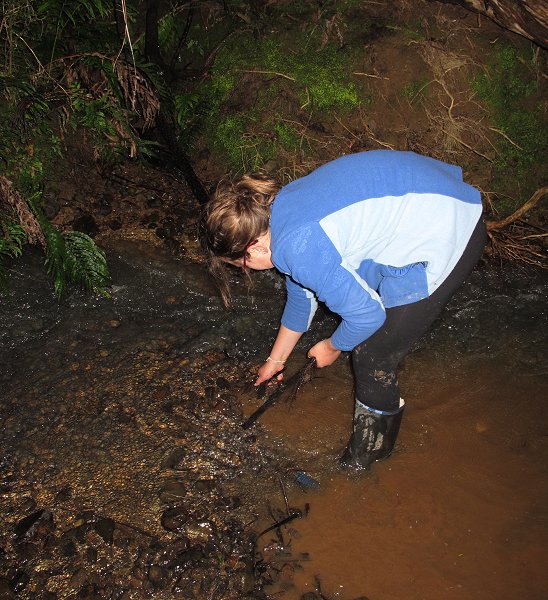 While I took my pictures, Ella clambered around on a huge fallen tree trunk, then set to undamming a small blockage in the stream. 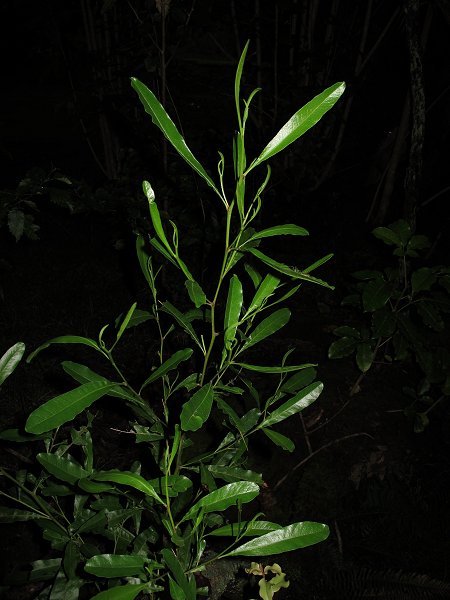 This is a young Akeake tree (pronounced ah-keh-ah-keh).  I found another one of about this size upstream a couple of years ago, but haven't seen it since.  Hopefully this one will survive - although there must be a seed source somewhere nearby, so no doubt there'll be more of them.