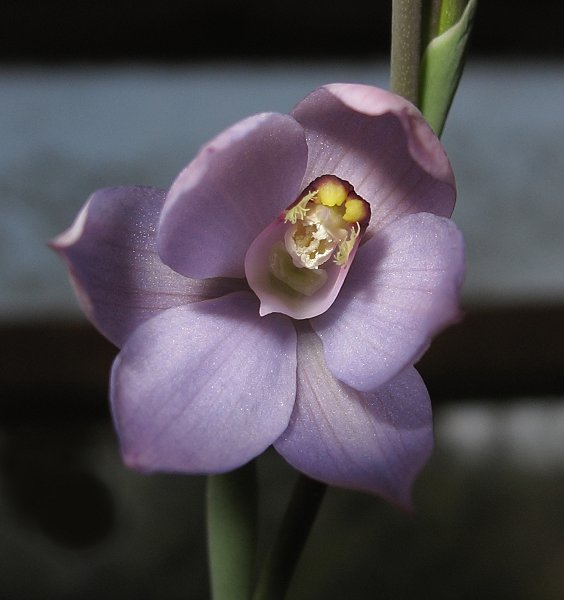 The weather was absolutely beautiful today, sunny and warm with a Northerly breeze.  Lovely.

In my greenhouse one of the Sun Orchid plants I moved from the Puriri log outside is already flowering.

I've been really slack about individually identifying the orchid plants I've "rescued" from various places around the farm, but in this case it's quite easy to tell which population the plant came from, with its characteristic lemon-coloured cilia and the shape of the mid lobe (the dark and yellow top of the column). 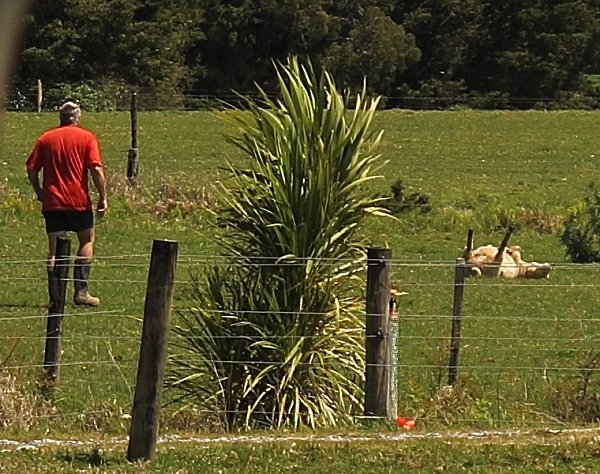 There's something about a sheep waving its legs in the air which draws one's attention.  We generally gaze across at the sheep when they're on the flats, looking out for odd movement, and when they're somewhere we can't easily see them, they get checked each day, so that should they end up the wrong way up, they don't have to stay there for too long.  Sheep will eventually die if not helped up out of this position.

It's such an easy fix: you just nudge the animal over so she can get some purchase on the ground and she'll be up.  If a sheep has been down like this for a long time, it pays to keep hold of her until she stops reeling dizzily, or she'll run off and fall over and if that's into a drain or other unsatisfactory terrain, the problem gets more complicated and time-consuming.

If a sheep really doesn't like people, it will often struggle so much as you approach, that it works its own way to its feet and you wonder why it didn't just do that in the first place?

Only a cute calf picture today.  Some people have been (teasingly?) telling me there are far too many cattle on these pages.  I think those sorts of people probably complain about sand when they go to the beach!

I told some students today that if, when they left their senior exams, they made any noise outside the Hall the teachers would Taser them.  A couple put up their hands when I asked for questions and asked if that was for real, were the teachers really allowed to do that?  The Principal said yes.  The Far North (or probably NZ) sense of humour is such a hoot.
Running the exam centre is quite a lot of work, but it's lots of fun working up at the College each year, for the few weeks during which I do the job. 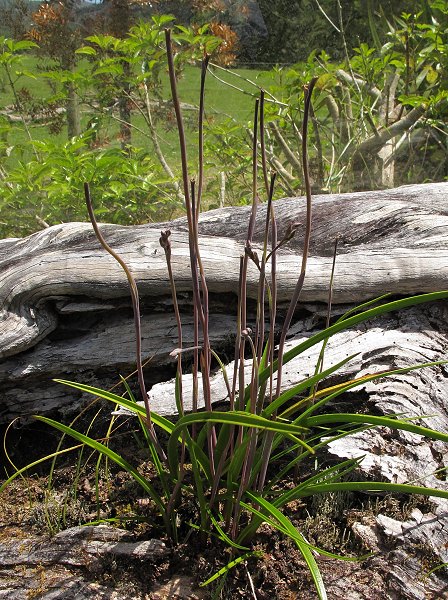 I was - devastated would be slightly overstating it, but not by much! - extremely disappointed when I went to check on the orchids today, to find that something else has been checking how they taste.  There were 15 flower spikes nearly ready to bloom and now there are only five left on the main colony of plants.

Every year the show of blooms increases and this would have been a splendid year.  However, I have had four years of photographic opportunity, so I shall just have to accept what's left and hope next year is better.  There was a tiny bit of slug damage one year, but this is the worst assault on the plants since I found them in 2008.

Theresa and Mary-Ruth came to visit, bringing wine and Hereford steaks.  They'd challenged us to a cook-off, a comparison of their Hereford meat with our Angus.  I don't think any of us minded who won, since we were guaranteed a good meal in any case.  But our steak was markedly better - which may have had a great deal to do with the age of the Hereford animal, as we were eventually told, i.e. some people eat their cull cows.

I've never quite understood that preference, although I quite understand the desire not to have to send an animal off on a truck to the works.  But if you're growing great beef, I can't see why you'd want to eat a tough older animal when you could arrange to have a young and succulent one processed in the same way.

After Mary-Ruth and Theresa had left us, we walked out and moved one lot of calves and cows whose calls we'd been listening to while we had our visitors - all were fine - and then continued out the back to check on the big mob, none of which we saw.  We heard a few of them call, just as we were leaving the paddock in the dark.  Then I'm quite sure I heard a Kiwi, so we stopped and waited for a while to listen for more calls, but didn't hear anything.

The streams really come alive at night.  This is one of the native Crayfish or Koura.

There are three fish in this picture, but there were a lot more in the area we were looking at with the torch.  They are presumably Bullies.

The maximum temperature hit 20°C today, for the first time this season.  This spring has been horrid.

Some time ago Stephan acquired a piece of roofing tin, a moulded gutter for a roof which was incorrectly ordered and was going to be dumped.  He saw that it had potential and brought it home.

Now he is transforming it into a slide for the pond.

There are a few problems to be overcome, including working out how not to have sharp bits where the tin needs to be folded.  He'll work it out and hopefully it will be a new, fun swimming feature this summer. 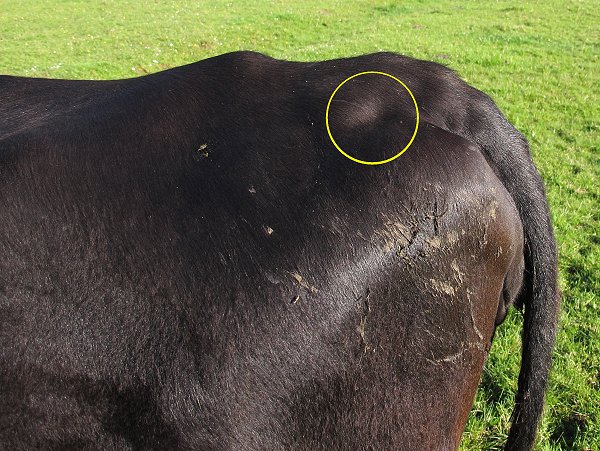 Zella's getting close to calving.  On my calendar, for months now, I've had "Zella due, calving end" written on Saturday, 3 November.  I thought she might perhaps calve a few days earlier since her mother, Imagen, with the same bull as sire for her calf, calved about four days sooner than I expected.

As a cow approaches calving, her pelvic ligaments stretch and soften and the outward evidence is various changes in her shape.  The tail head rises and dips (circled) appear in front of the pin bones.  In some cows these changes are very marked and in others, barely noticeable.

Thursday the 1st of November 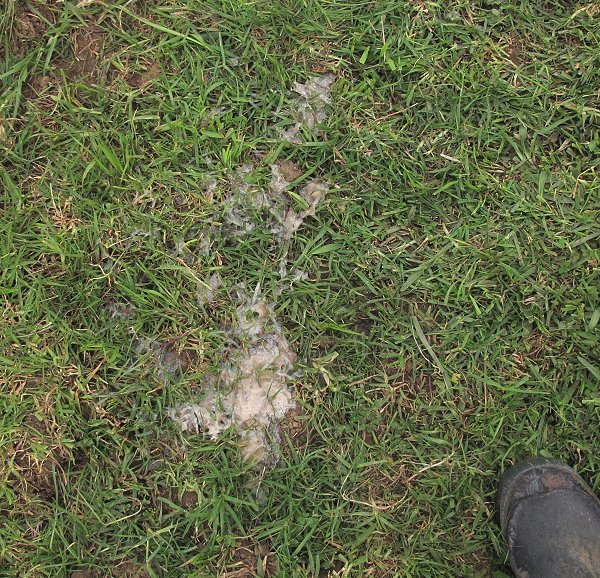 Calf scours, the early stage of the diarrhoea caused (probably) by the protozoa Coccidia.  As long as the calves are still looking lively and feeding well, I let it run its course.

Two-year-old 657 and her daughter.
657 was herself the daughter of a two-year-old heifer, 605.  Some people won't keep the heifer calves from their two-year-old heifers, because they're often a bit small - the first lactation isn't always adequate to fully meet the calf's needs.  But if one is making deliberate genetic progress, these heifers represent the best genetic potential in the herd, so if they're well-grown, they're well worth keeping.

It'll be interesting to see how this calf develops.  She's a Joe 90 daughter. 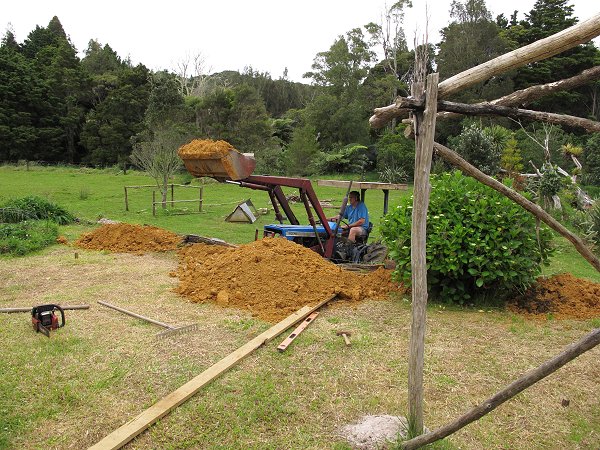 Before Stephan built the retaining wall and created the lawn, it was just a gently-sloping bit of the paddock.  (There are some pictures of bits of it in 2005.)

The fill he used to raise the lawn behind the retaining wall has settled over time and, as we're to host some major part of the family Christmas gathering this year, Stephan decided it was time to complete the levelling.  The big pile of soil from the road corner was very useful - except that being clay, it is a bit sticky when damp. 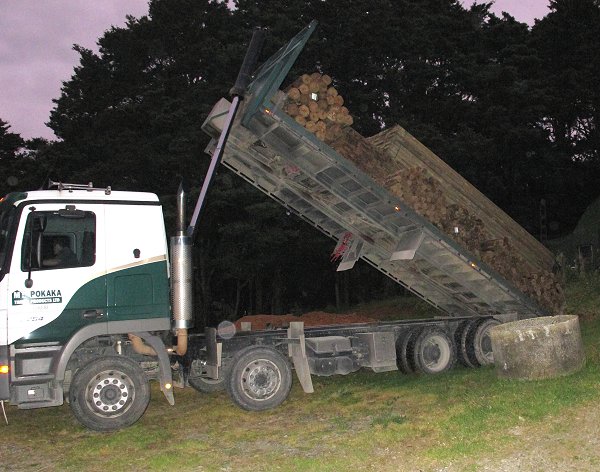 A very early delivery from Mt Pokaka timber, at just after 6am.  If you order a truck-load, they'll deliver it for free.  This is the second lot we've had from them - the first for the new boundary fence Over the Road a couple of years ago.  Their posts are excellent.

I still find it rather exciting to purchase great loads of materials like this, rather than having to do it in dribs and drabs as we did when money was tighter.  We didn't win Lotto or anything, but improved cattle prices have meant the farm has more income to pay for maintenance and development.

Buying in bulk is always cheaper and it's great to have the materials on hand when a job needs to be done.  We're planning quite a lot more conservation fencing over the summer, to protect more of the stream banks and wet areas.  Hopefully the weather and ground conditions will be good for such works. 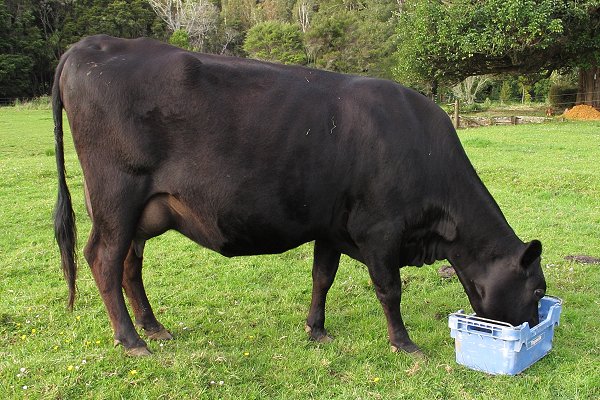 Zella, still holding on ...  She's had molasses and Magnesium for longer than any of the others, but that's not a bad thing, considering her milk production levels should be higher than the rest of the herd.

Two of the remaining five orchid flower spikes were nipped off this morning, so Stephan put up a protective structure around the plants, to deter whatever creature it is which has developed a taste for my beautiful plants.  Lots of the toxins laid around them have been taken, so we're wondering if it's rats?