The week beginning the 2nd of June 2012.
Saturday the 2nd 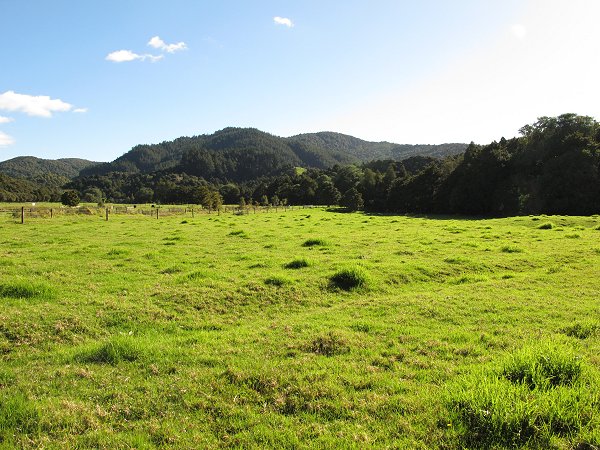 I can't yet see any difference in the House paddock, between where I sowed the rye-grass seed and where I didn't - I left an area so that Zella (housecow) could graze in here, and also because there wasn't any point in sowing the low wet area, nor the bit in front of the house where the birthday party bon-fire was to be. 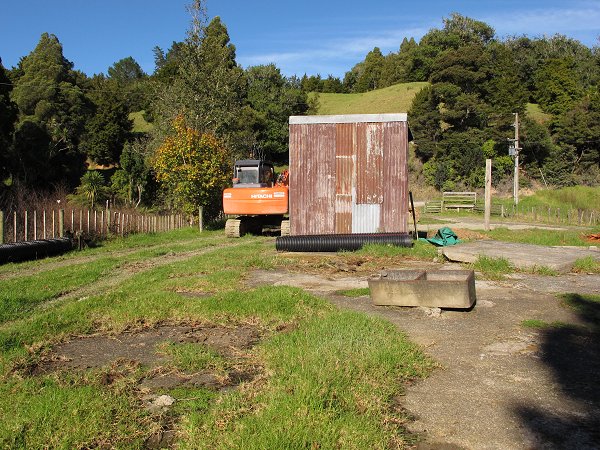 On Friday, someone came and removed the dilapidated Oliver 6 Bulldozer which has sat beside the shed, rusting away, for several years.  Happily for us, the day before that same person had given Stephan some cash for it.  Both of us are very pleased it's now gone; Stephan because it's been weighing on his conscience for years, and I because I worried that a cattle beast could get hurt by being pushed against its front blade's sharp corners.

I haven't really thought about what to do with this area in the long term.  We plan to build new cattle yards because the old ones here are beginning to break down and it would make more sense to have yards in the middle of the farm.  We'd not remove anything from here, because cattle would still need to go up the loading race onto trucks.  A bit more fencing to have holding yards for cattle about to leave the farm would be a sensible addition which I'll give some thought to.

The digger on the left belongs to the road-work contractors; they've been parking their vehicles and various machinery in here when not at work on the corner realignment.  The little shed is all that remains of the earlier woolshed, which covered all the patches of concrete now being over-run by Kikuyu.  Originally there was a walk-through milking shed. 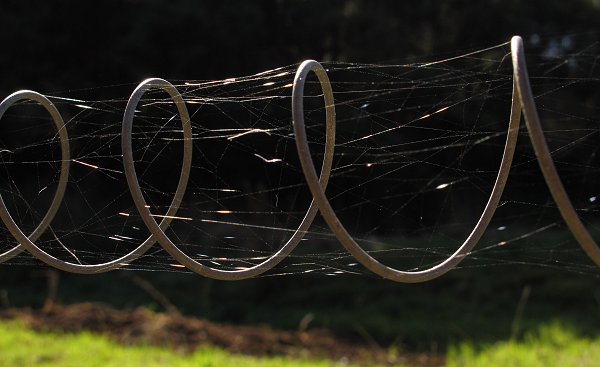 Walking out to collect the cows this morning, the light glinting on this spider's web in a spring gate caught my attention.  It's lovely to have some sunshine to do that! 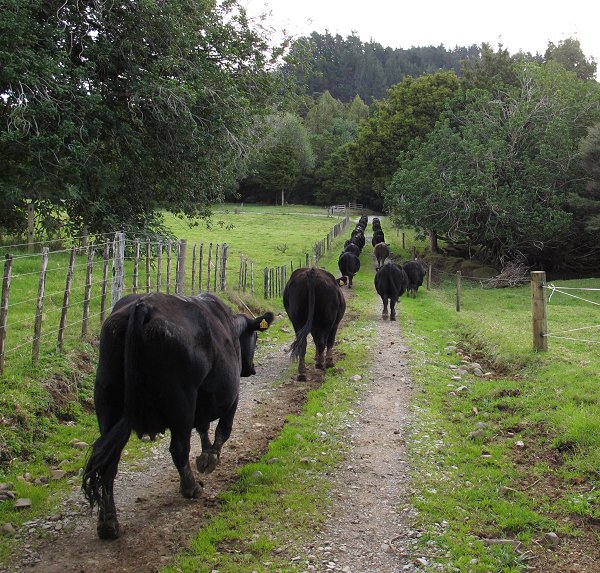 I took the cows in to the yards to put some pour-on drench on their backs, since the weather appears predictable today.  I left sore-footed Irene and a companion in the Swamp Paddock on the way, because I didn't want her to have to walk so far.

I had intended to drench only the lighter cows, but as a number of the herd were heavily rained on last year before the specified waiting period after drenching, I decided to do them all - it is the Liver Fluke which must most importantly be controlled.

I had marked five cows on my list to be weighed only, not drenched, because they're on my cull list.  One of them is Abigail and I have been having a hard time coming to terms with the need for her to go this year.  This is the hardest part of this life for me.

When 542 came up the race, I marked her as well.  I've been tossing up whether or not to keep her in the herd, but she's had two heifers in the last two years which I decided not to keep as replacements because they had too much Jersey (dairy) appearance.  I want to breed thick-bodied beef cattle, not light-boned little things and 542's daughters are my third-cross attempt at that in her family line and still I've failed.  "The force is strong with this one."

I sent the main mob back to join the other two cows and kept the six cull cows by the yards for further consideration. 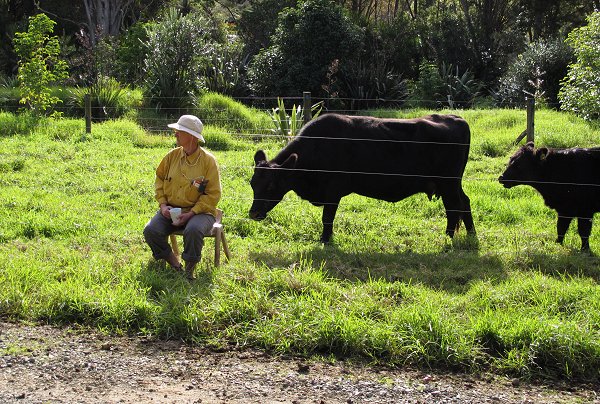 It being fine again this morning and likely to remain so for the whole day, I went out with thirteen plastic pottles in a bag and started collecting poo.  I wanted to do a Faecal Egg Count Reduction Test (FECRT), which involves doing an egg count on samples from the young cattle before and after drenching them, which will then tell me if the drench is still killing the internal parasites my animals carry.  There's an increasing problem with drench resistance in those parasite populations, so a FECRT is something all farmers should do periodically.

The bovine immune system responds to the onslaught of internal parasites, so that by the time cattle are around nine months old, their bodies are able to suppress, to some extent, the activity and effect of the parasites.  Faecal egg counting after that time becomes unreliable because any adult worms may not be able to produce eggs as a result. 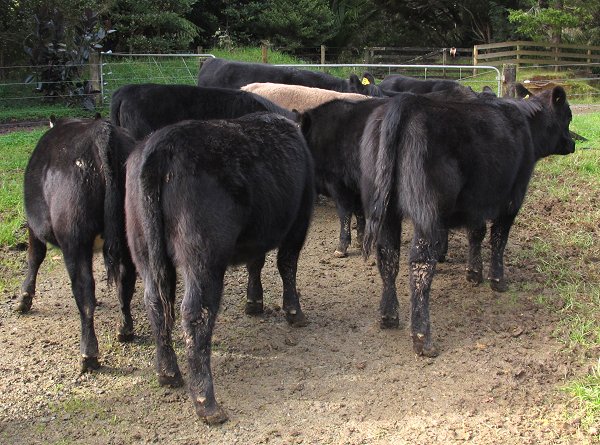 Waiting for thirteen heifers to poo is a job requiring much patience and attention - the slight lifting of a tail must be observed, and then any issue collected while ensuring one has clearly seen the number of the eartag on the animal making the contribution.  Picking up warm poo is no big deal.  Much of it was quite firm in consistency and I just scooped a little up on my finger and popped it into its pottle, writing the animal number, the date and my surname on each one.  I could have worn gloves, but had not thought of it as I went out to do the job.  I wiped my finger clean on the wet grass between each sample and dried it on my trousers.

When I was waiting for the last three, I managed to get close enough to one of the heifers to apply a little digital stimulation, which prompted the appropriate response.  The last two obliged as they went through the area where we had #86 slaughtered a few weeks ago - cattle will generally open their bowels when their feet are in water, or when sniffing something alarming and I probably ought to have taken them all there to start with, except I wouldn't have been able to keep track of whose poo was whose. 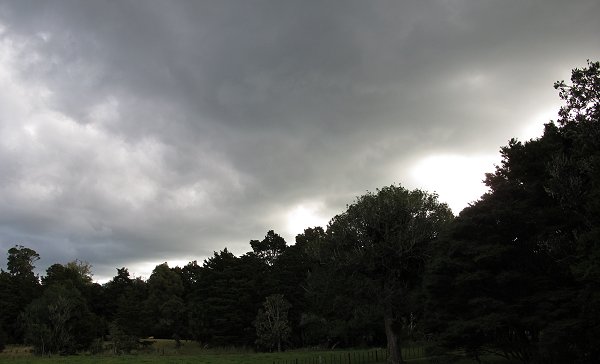 I then put the youngsters over the scales and applied the pour-on drench.  These thick clouds gathered as I worked and I was horrified when I thought I felt a wet drop on my cheek.  But the forecast had been reasonably "safe" and these clouds gradually passed by without any precipitation reaching us and the sun came out again for the rest of a warm afternoon. 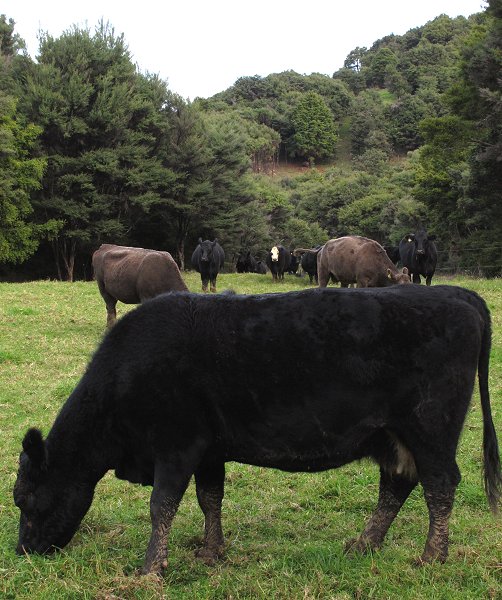 The cows are in the Swamp paddock and this is looking back from near the boundary, to the PW, where Graham has been cutting firewood - he cuts in the winter, comes back in the summer to take it out to sell; we get cleared land, he makes a bit of money.  The brown patch on the hillside is where he's been working. 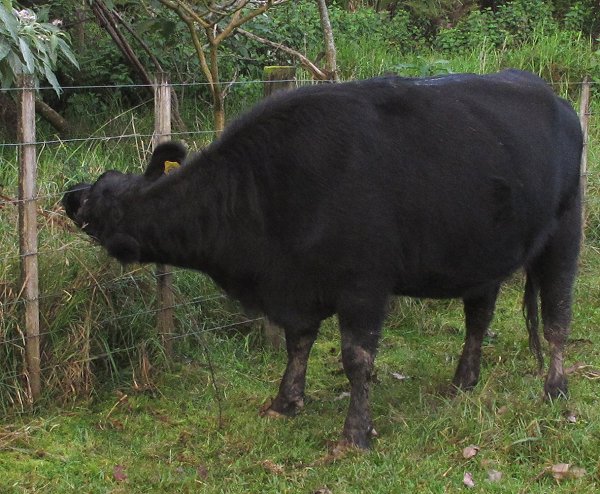 Emma 93 is the only cow I've seen do this in recent times.  Her aunt, Delilah, had a similar bad habit.  These things certainly seem to run in families.

Stephan will eventually put a hot-wire along here, which will discourage such wickedness.

There are some big pigs around somewhere, evidenced by patches of bare earth in the Swamp and Back Barn paddocks, where there was grass yesterday.  We need some more pigs killed! 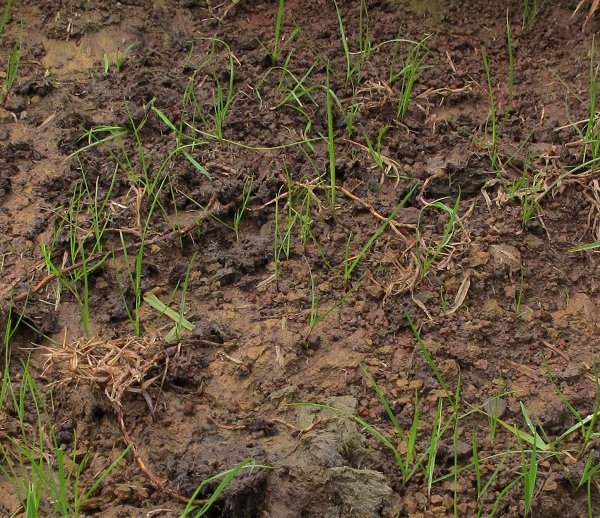 When I sowed the Rye seed in the House paddock, I threw some over this little patch of bare earth, so I could see how fast the seeds were growing.  The plants now have at least three leaves each, so they're going well.

My stock agent phoned to say the cull cows and bull could go tomorrow, so we went out to get Athena's son, #97, out of the little mob in the Windmill Paddock.  He's a strange looking animal and I ought never to have kept him as a bull, but thought he might perhaps grow out alright.  But when Athena continued to behave so badly around calving time, I decided it would be irresponsible to use any of her sons for breeding, in case they were to pass on her overly intense mothering instinct.

Stephan commented, as he walked behind the bull down the lane, that he was demonstrating once and for all that red doesn't enrage bulls! 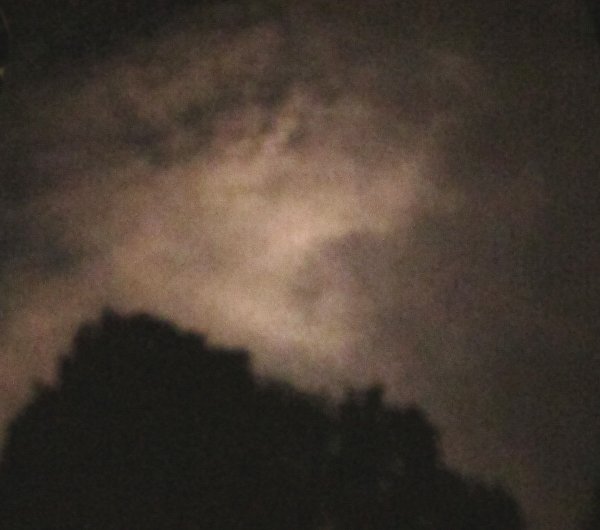 I've been looking forward to seeing the Transit of Venus, but the clouds were almost unrelenting today.  When the sky brightened and the sun came through for a few seconds at a time, I went to our observatory and watched all the suns on the wall, shining through the multiple nail holes in the corrugated iron.  I held a bit of card in front of one of them and thought it looked rather arty. 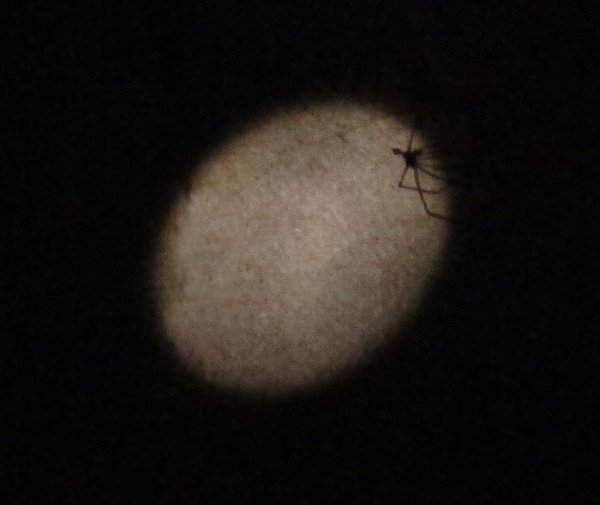 I thought I saw Venus at one point, until I realised the dot had legs: Transit of Spider.

But walking back down the driveway, I happened to look at the sky's reflection in a puddle at a moment when there was enough thin cloud across the sun to reduce the brightness enough to see it clearly and am fairly sure I saw Venus, for one fraction of a second.

I still clearly recall my previous "encounter" with that planet some years ago, probably 1996, when Venus was visible well into one morning and I could see it clearly, until it got too near the sun to look at any more, which wasn't until around 11 o'clock.  It appeared the size of a pin-head, like a tiny white moon.  I knew to look for it on that occasion because we were in the habit of listening to the radio in the evenings and an astronomer had said it would be so.

Mid-afternoon we brought the cull cows up into the yards and put them one at a time over the scales, sprayed R.M. on their backs (and "Old Fav." on Abigail, in the hope that people might be kind to her on her journey) and put Abigail's first-ever ear-tag in her ear: a Direct To Slaughter fold-over tag.  Dexie 46 needed one too, as did a couple of the others who have lost their tags over the years.


I then stood around with them for an hour or so, grooming them all.

The stock agent phoned this evening and said the cattle won't be going to the works tomorrow.  This is an emotional roller-coaster!

The Pine forest logging operation appears to have ceased up the valley.  Today we saw the enormous digger we watched go up the valley in January, being carted back out again.  Yesterday down at the bottom of the valley road, we came upon another enormous machine on another huge truck which had presumably also come down the road, although we had not heard it pass.

Today we drove to Whangarei to pick up the Vasa from Jill's former neighbour's garden shed.  Stephan also had a gift voucher to spend at a bookstore, given to him for his birthday, with which he bought a small World Atlas.  We don't have one and have often wished to refer to one; even though the internet will answer most questions, sometimes a book is a far more appropriate, comfortable or immediate source of information.

At an op-shop (second hand stuff, raising funds for good causes) we found plates to match our crockery, of which several pieces have been broken on our concrete floor and some useful items of clothing.

At 3pm we went to pick up the ship and met with both of Jill's former immediate neighbours, and the woman who now lives in Jill's old house, who took me in to show me how comfortably she is living there.  We had tea and biscuits with the lovely woman who has accommodated the model ship for a while, set a mouse trap for her when I spotted a small rodent sneaking in behind her dresser (and she told me the mouse was caught by the time we reached home), then with the ship carefully secured in the display case Stephan had made for it, we drove home.

Arriving with still just a little light in the sky, we could see that the contract fencer has wired up the replacement fence on the corner over the road, and had left his large tractor near our house for overnight safety.  Presumably he'll be back tomorrow or on Monday to batten the fence.