The week beginning the 3rd of November 2012.
Saturday the 3rd 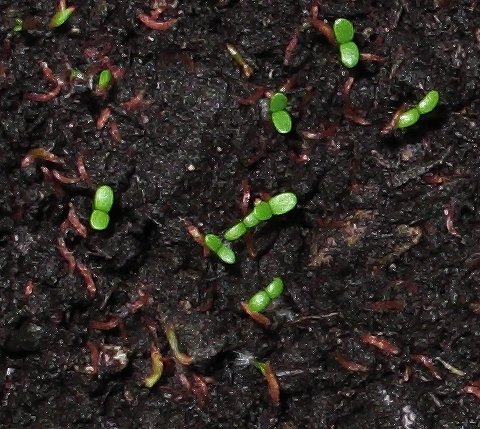 These are the germinating seeds of the pink Manuka out in the Swamp.

The seeds are tiny things, thin, about 3mm long and their seedlings are correspondingly small.  I'll have to wait quite a while for them to be big enough to transplant.

It'll be fun to see what colour they flower.  I presume white is the dominant colour, although there are quite a lot of light pink flowering plants around.  I wonder what is written of Manuka flower colour? 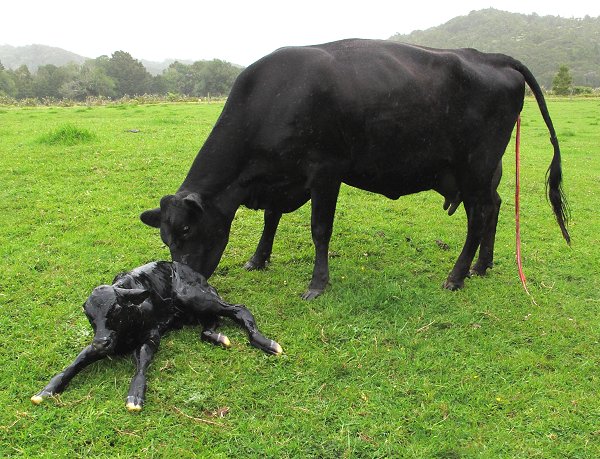 Zella calved this afternoon, with a little help from me, because I'm inclined to interference - the less effort she has to expend, the quicker she'll recover and get on with being our nice Housecow.  The calf is a bull, with very soft little white feet.  The white is the soft covering over the bottom of his hooves, but it seems brighter and longer-lasting than on the other calves.

That's calving finished for the year, right on schedule and for the first time in ages, a 100% survival of all calves from the pregnancies in progress.  In other years there have been slips (abortions) during the year or calf deaths at or around calving.  So far, so good!  There are still some hazards in their way, but it's good to have such a good result to this point. 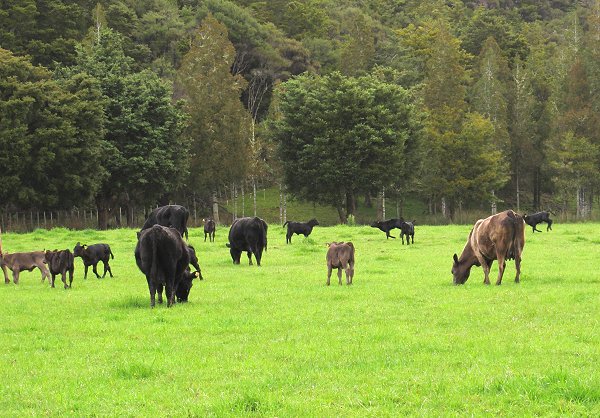 Whenever I move the cows and calves into a new paddock, the cows get straight down to the important business of eating, and the calves explore their new space, often at a sprint.  They obviously have a lot of fun racing each other across the paddocks, then gathering in playful groups before setting off again. 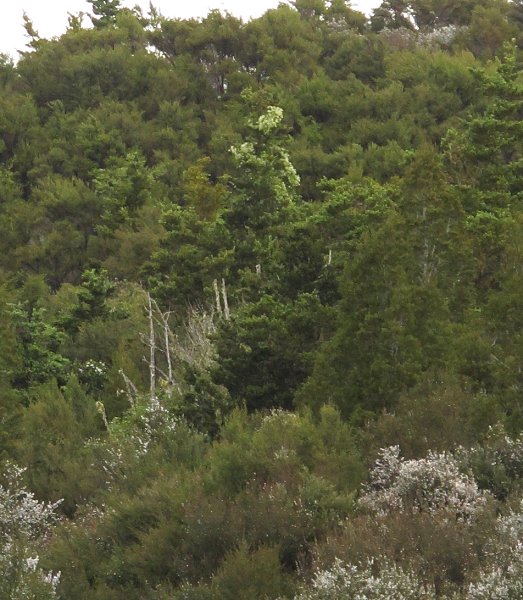 The white at the top of the tree in the centre of the picture is presumably the fibres of the seeds of the Clematis vine which flowered there a few weeks ago.  I'd like to get hold of some of those seeds, but they're a long way up a thin tree. 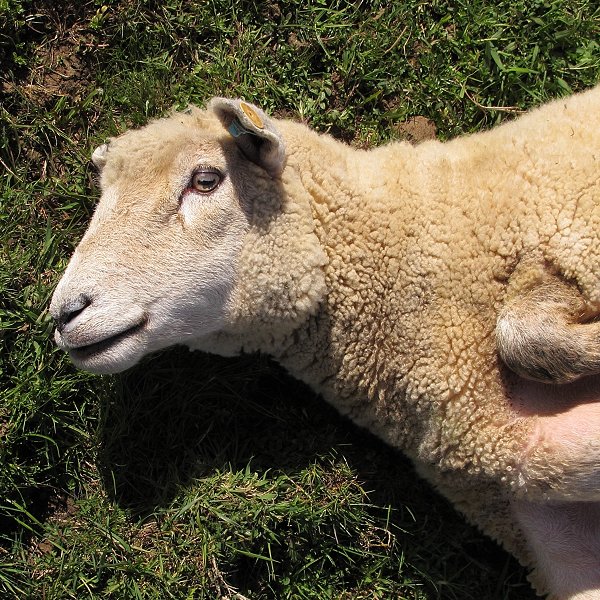 This is not a particularly tame ewe and she doesn't like me getting this close to her; so perhaps she shouldn't keep rolling over onto her back and needing help to get back onto her feet.

She is the animal I refer to as Tag-ewe, a triplet daughter of Dotty.  There must be something odd about her physiology which causes her to roll onto her back so frequently. 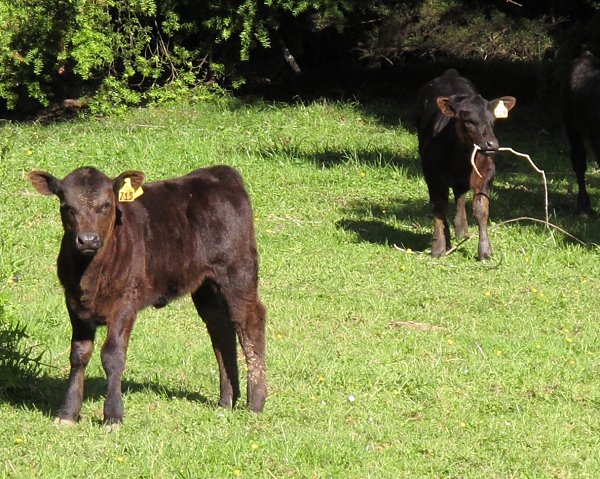 Maybe chewing on sticks feels good when you have new teeth erupting? 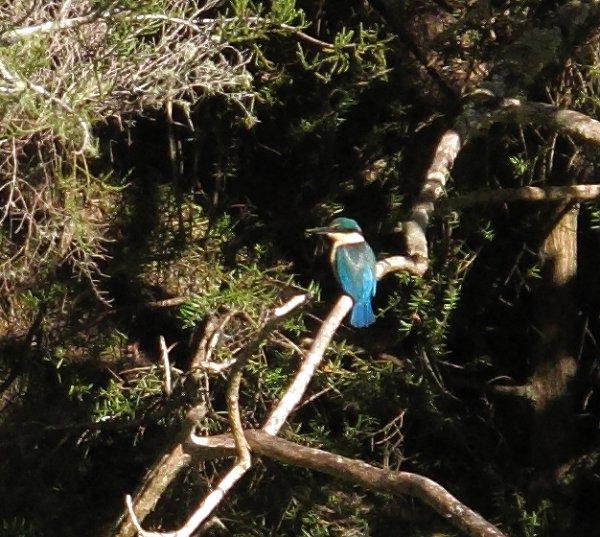 The jewel-like colours of this Kotare (Kingfisher) caught my eye in the sunshine this afternoon while I was checking the cattle. 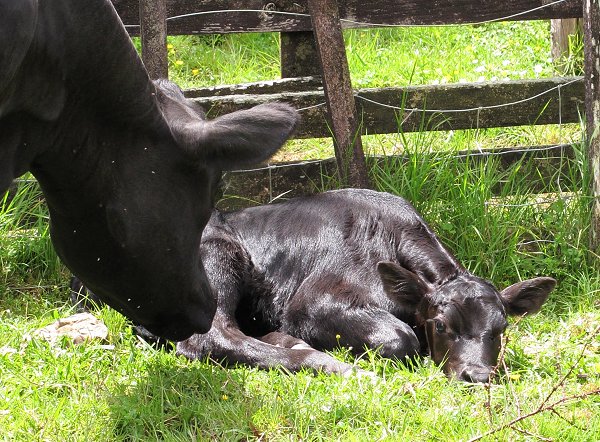 I spent my day working on Exam organisation.  Somebody drove in to visit Jane and I went out to check that Zella, 657 and their two calves were not disturbed.  Zella had gone off, leaving her calf sleeping in the grassy yard.  He lay with his eyes open like this when I approached him, so I called Zella back to collect him.  A calf which is this watchfully still when you approach it is likely to leap up and take off in panic if you get too close.  Once Zella was there with him, I could safely prompt him to get up and follow her away to where she had chosen to graze. 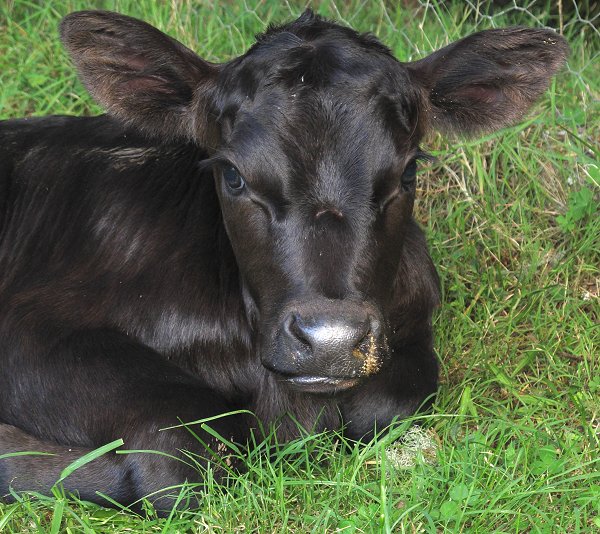 Later on the calf looked a bit less likely to bolt, so I took some pictures of him before stroking him to get him up to go to the yards to be weighed and have his numbered ear-tag inserted.

His coat is so soft and silky.

I trained my exam supervisors this morning.  Stephan baked a couple of cakes (one for the wonderfully helpful College Office staff), biscuits and Ginger Crunch and organised all the teas and coffees for the morning.  It's lovely for me, not having to think about that side of things.

Each afternoon there is a short period of heavy showers.  It's not a pattern I enjoy. 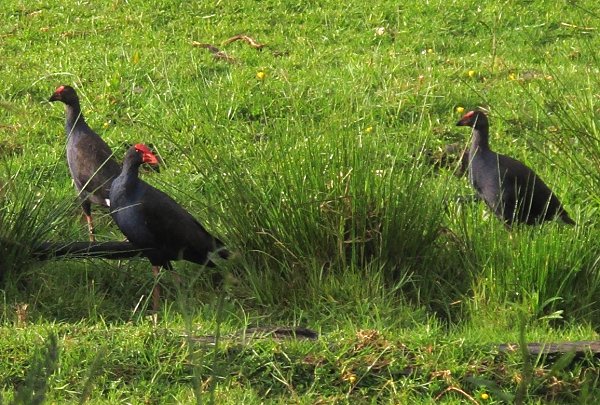 The Pukeko family roam around the House Paddock, the driveway and yards and the Pig Paddock out the front.  The chicks are now almost as big as their parents, with their head shields and bills beginning to turn to red. 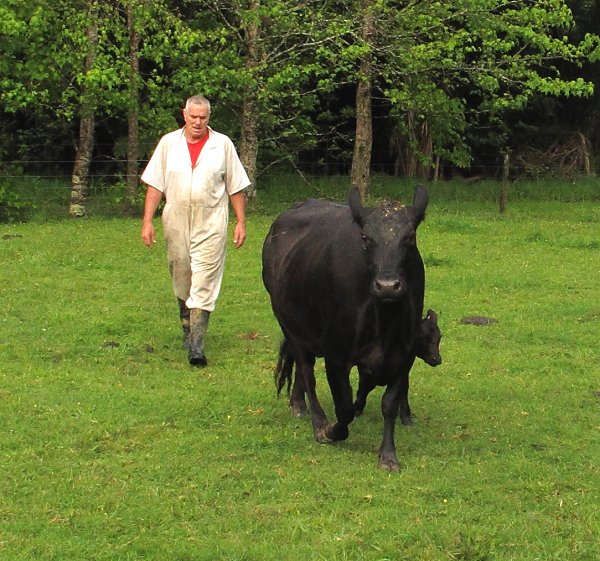 Zella is getting into a routine for milking.  It is taking her a few days to settle down after calving and she's still a little anxious about being separated from her calf, even when he's just on the other side of the rails in her milking bail.

We've been milking her twice a day, partly to get her used to the process again, but also because her milk production is far greater than her calf needs and she'll be uncomfortable and her production will adjust if we don't take what she has available.  I've frozen quite a bit of colostrum for emergency use next season. 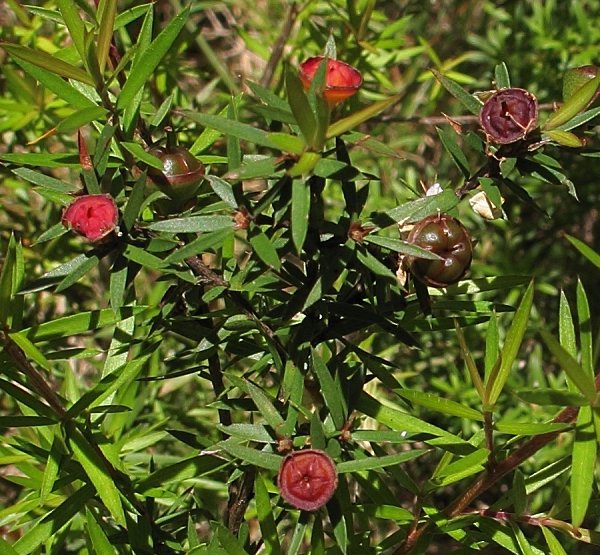 These are Manuka seed capsules on a small plant which has already finished flowering.  In a few months they'll mature to a dried bark colour and be ready to open and release their tiny seeds. 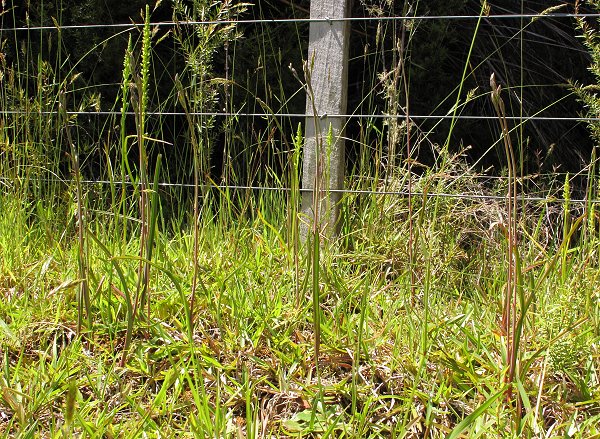 These are Sun Orchid plants along the fenceline in the Bush Flat paddock, at the base of the Bush Block.  I put an electric tape around them back in August so the cows wouldn't eat them and there are now many plants with flower buds - the buds are visible between the top and second wires in the picture.

They take such a long time to prepare for only one or two days flowering. 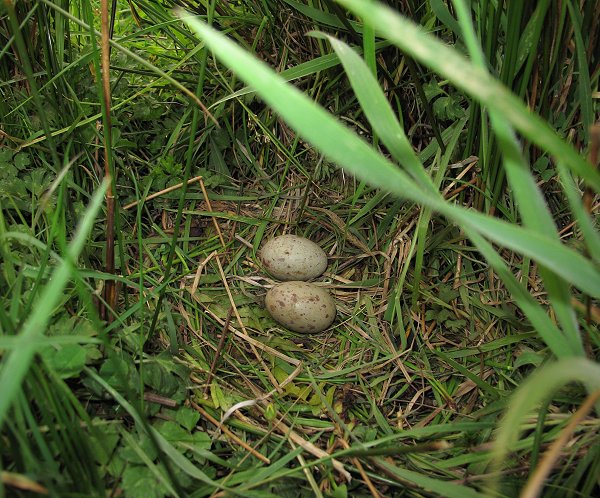 Each time I ride along the track near Flat 5a, several Pukeko dash off from some rushes near one of the drains.  This is why.

Pukeko breeding season is long, from early in the spring through until at least mid-summer.

This nest will presumably have a few more eggs laid over the next few days. 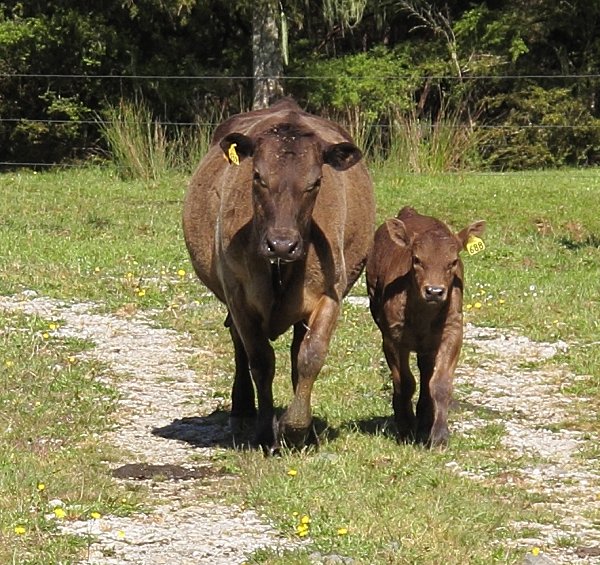 I moved the mob of 17 cows and their calves this morning, except I wasn't quick enough to ensure all the calves went through the gateway and across the stream with their mothers and three got confused and turned back into the paddock.  Eventually two of them worked out where they should go, but this grey calf, son of 639, is not a calm little animal and panicked, running away into the paddock on his own.  There is a point at which it becomes obvious that nothing I can do will work to get such a calf to go where I want him to, and that only his own mother will be able to calm him down, so I went and brought her back to find him.

She wasn't convinced that I was taking her in the right direction, but she obviously knew her baby was missing, and eventually, after a lot of calling from her as she dashed into the paddock, he answered and then they came out together and along the lane. 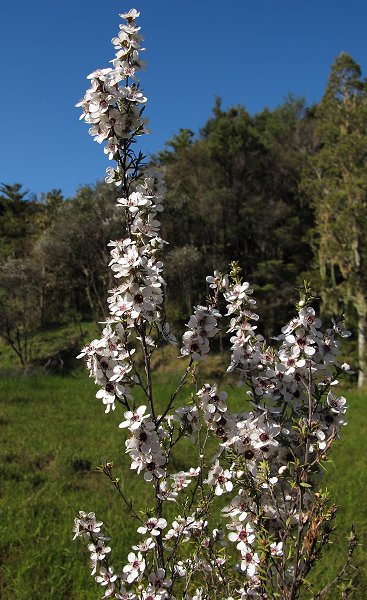 This is a young tree.  They often appear to be all flower and no leaves when they're small and in bloom.  They're very pretty.

The three Pukeko chicks from the House Paddock happened to be together in the yards as I rode out to get the mail this evening, so that I could take a photo of them all in one shot (I've cut it to pull them closer together for easier viewing) and the size and shape differences are fairly easy to see: the two on the outsides are female and the middle one is male.  When seen on their own it's quite hard to tell male from female, but together the larger males can sometimes be distinguished.

It has taken eight weeks for them to grow from tiny chicks to almost-adults.