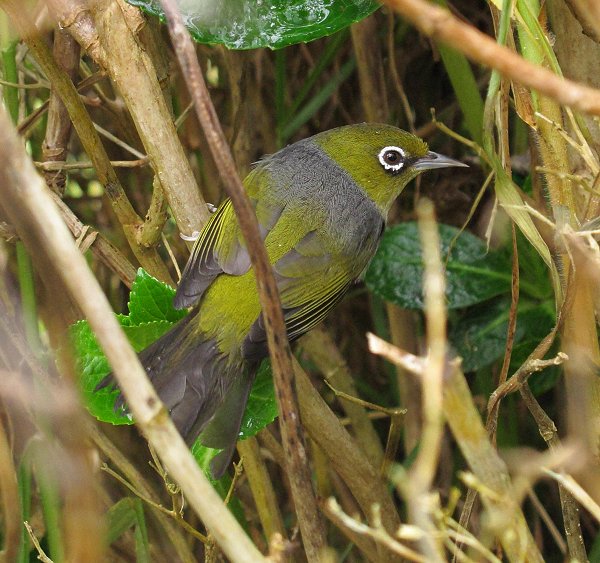 Another near-victim of the window glass this morning, but this time the bird had flown into a wonderfully dirty window, so perhaps my cleaning them or not is of no consequence.

I heard the bang and so did Finan (the cat) who ran out the cat door and headed around the front of the house to see what he could find.  I beat him there and the little bird flew off the windowsill where it had perched, stunned for a minute, to the Hydrangea bush on the lawn.  I stood guard for a while to ensure Finan didn't try and find its hiding place while it recovered further.

Normally I'd not be able to get so close to a Waxeye (Zosterops lateralis), but this one was still not ready to fly away yet. 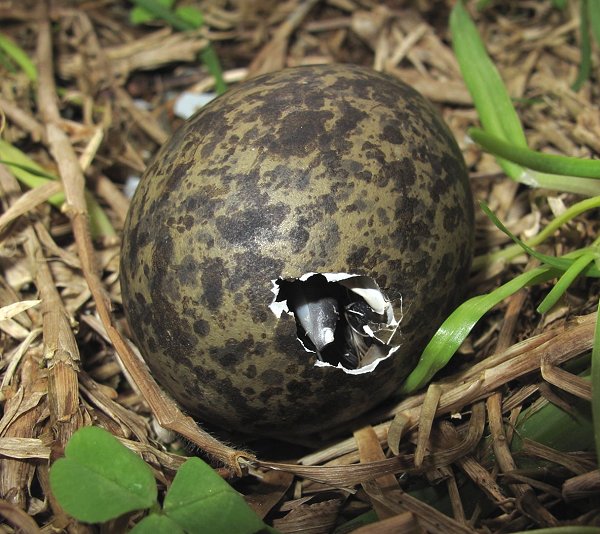 The second Spur-winged Plover egg is hatching.  The white bit on this chick's bill is the "egg tooth" a hard, sharp, temporary extra, used to score the inside of the shell so the bird can hatch out.

There are only a few shell fragments left in the nest from the first chick's egg.

I found a Plover chick several years ago, back when I still did wicked interfering things with birds I thought needed my help.

I doubt I'll see these chicks again.  The only indication that they're around somewhere is the frantic behaviour of their parents, any time I (or a hawk) appear. 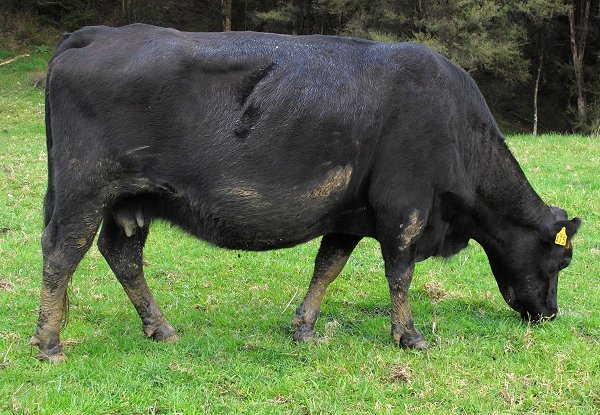 The two skinny cows now grazing on their own: 475 and 602.  I recall 602 looked a bit off-colour a few weeks ago.  Whatever ailed her may have taken a toll on her condition, or her ability to improve it, since most of the others have been storing fat recently, gradually smoothing out their bony bits. 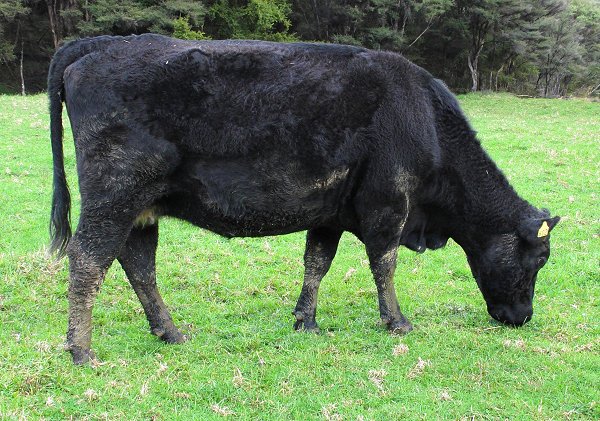 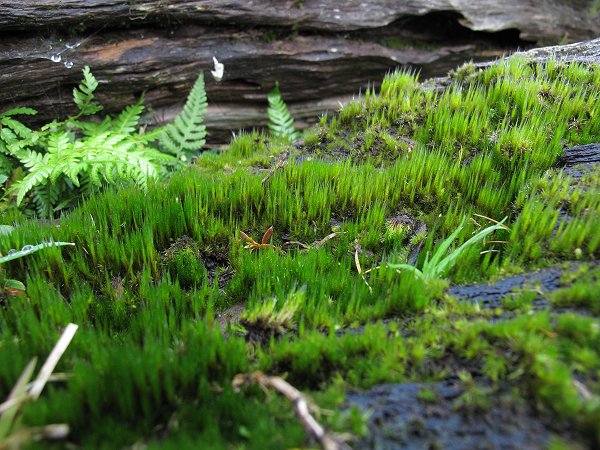 If you were very, very small, this would be a significant forest!

There are some pretty mosses around. 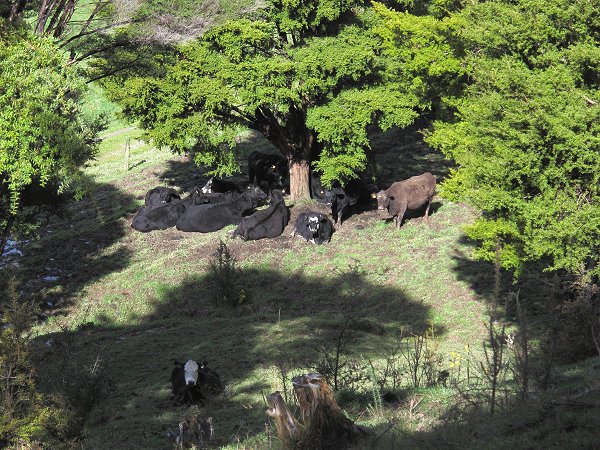 I walked right out to the back boundary today, then up the hill to open the gate for the cows in the PW to come into the Middle Back.  I called for a while, hoping they'd make their way up to me, but heard no response.  They were all lying in the sunshine in the front corner of the paddock when I came down the steep hill. 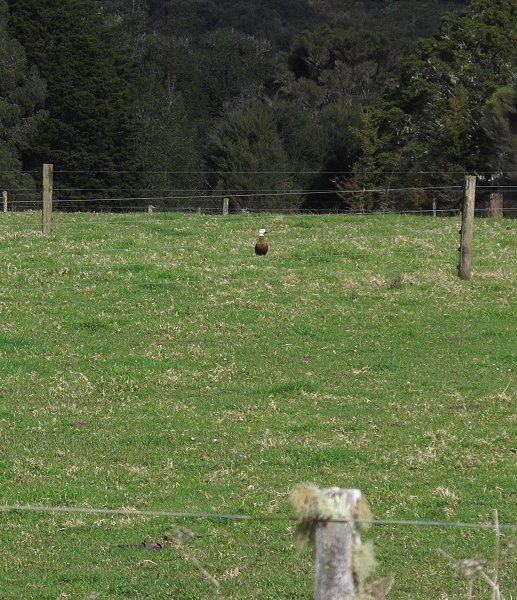 This very noisy female Putangitangi has arrived home in the last couple of days.  I have a strong suspicion she's the duck whose partner's leg was torn off last year and that he has not survived.  She seems quite lost and distressed. 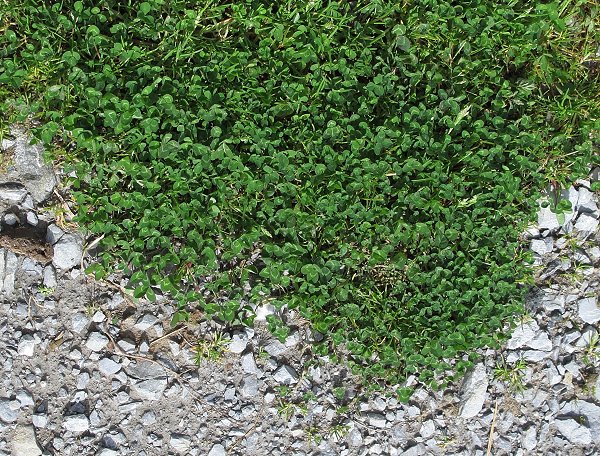 Clover is growing in thick mats all along the Windmill track.  That's probably a very good sign of something.  Clover has had a hard time over the last few years with the incursion of the Clover Root Weevil and the Clover Flea which have seriously challenged its survival in some places.  I don't think we have either in great numbers, and there's generally a fair amount of clover in the pastures, but we could always use more! 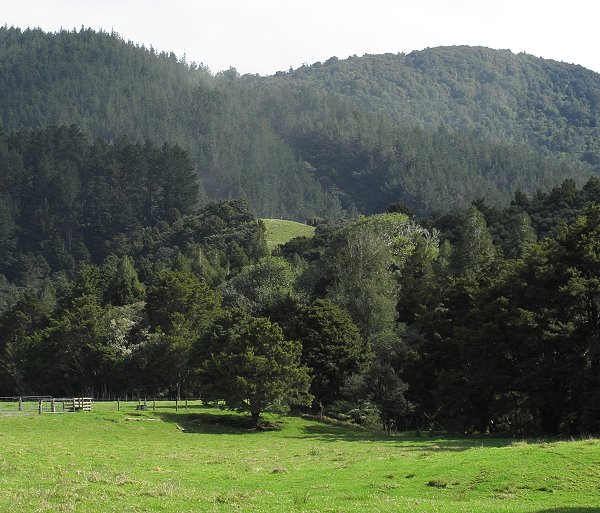 Pine pollen has been floating on the water in the troughs over the last few days, so I wasn't surprised to see a faint mustard-coloured mist emanating from the big plantation on our back boundary. 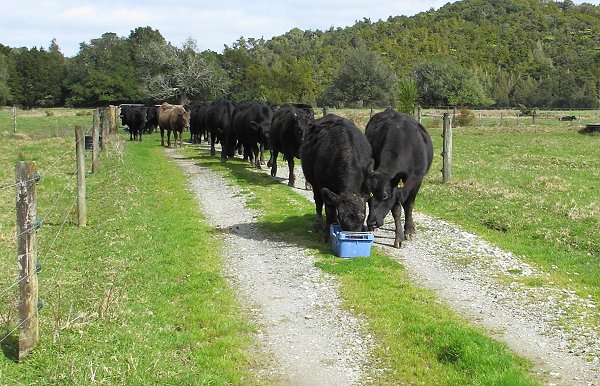 The heifers are really spooky when I walk them past the house.  The best way to stop an animal being scared of something is to give it something nicer to think about, so I got a container with a bit of Molasses in it and showed it to the most willingly curious animals.  The twins know about blue containers already, from their youth, but it was 701 who really became keen on the idea very quickly and led everyone else past the house as I carried the container ahead of her. 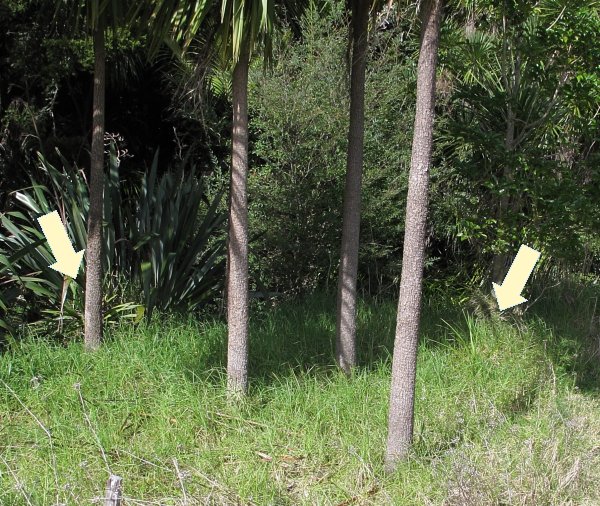 The Cabbage Tree which fell down last year, has sprouted again from its base, as well as appearing to remain alive at the top (left arrow pointing to the top of the tree and the right to the new growth at the base). 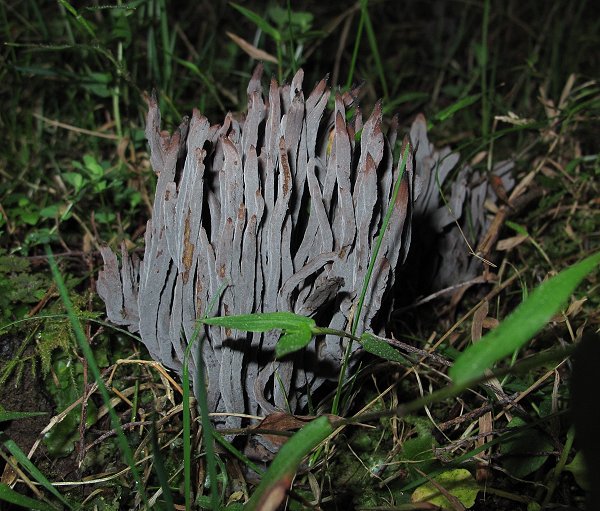 Climbing the south (damp and cold) side of the hill in the Back Barn Paddock, I nearly trod on a couple of these impressive fungi.  This is the most multi-branched of its type I've yet found.  The brighter coloured versions of the Coral Fungi mostly grow as single fingers from the soil, or occasionally a few fingers together. 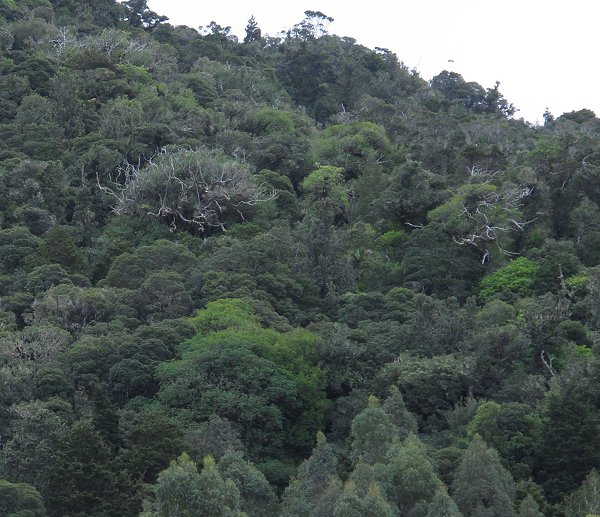 I heard someone on a quad nearby, probably on the track which comes along through the forestry land amongst the gum trees (whose tops are at the bottom of the picture), so lay for a while at the top of the hill to listen for more noise.

The old Puriri trees in the bush on the hill all show signs of significant damage, with their dead branches extending nakedly beyond their current canopies.  They are presumably vastly older than a lot of the surrounding bush, since those hills must have been grazed to some extent in decades past - there are still old fences in there in places.  I wonder if the damage was caused by stock pressure around their roots, as has happened on our place, or by possum damage over the years? 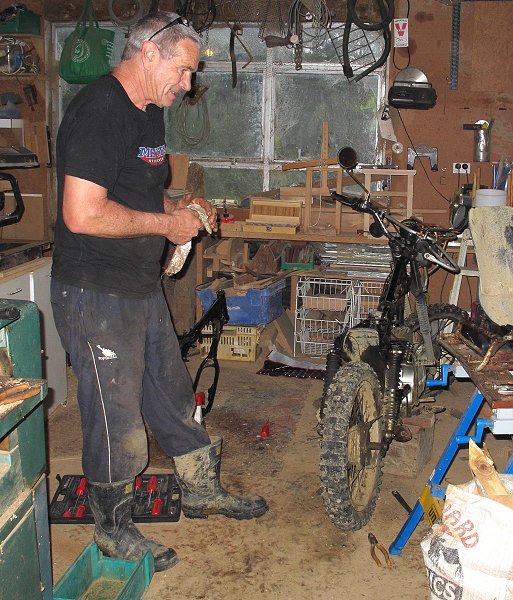 Last week I looked on our local internet auction website to see if I could find anyone wrecking and selling parts of an AG100 motorbike, since my frame has now collapsed to such an extent that I can't safely ride it at all.  There was one down in Taumarunui and we ended up getting the frame and seat for a very cheap $150 freighted to Kaitaia!  It's a perfect frame with no more than a little surface rust here and there. 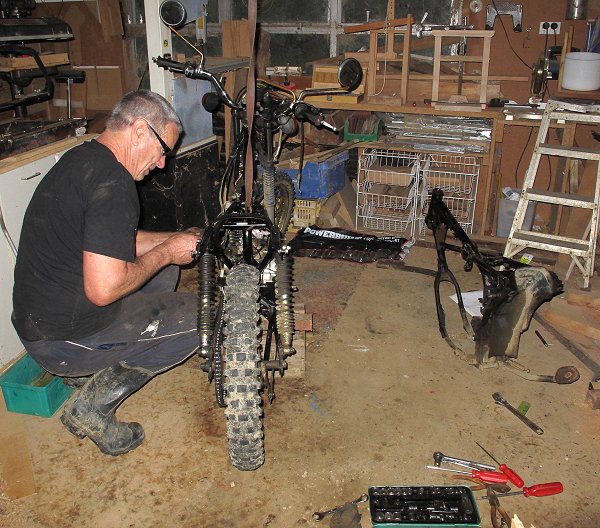 This morning Stephan began the transfer from the broken frame to the new one.  He worked all day, with the occasional "please come and hold this" help from me, and got it pretty much finished, with only a little adjustment left to do.  The local bike shop would have charged us at least $1200 for a replacement frame and the transfer, so it was a job worth doing ourselves.

I'm delighted.  The bike has been a pain in the neck - actually the shoulder, when I fell off it a few times - in some respects but lately, after one of the senior mechanics pinned down and fixed a long-term problem, it's been really good to ride, so I'm glad we've been able to renovate it so easily.