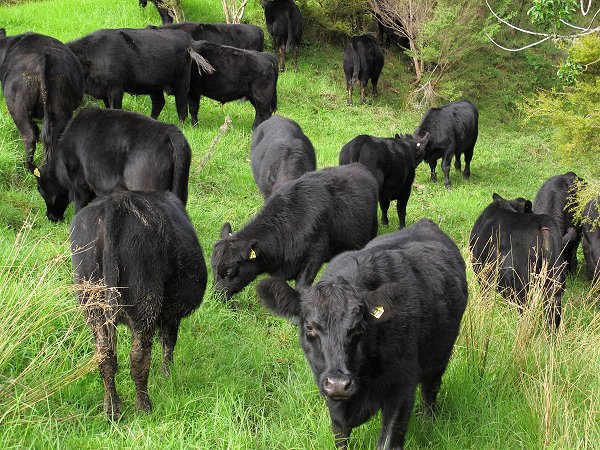 Now that the swamp fence is finished in the Big Back paddock, the cattle can graze there again.  When I opened the gate at the top of the Middle Back, the animals came out and started eating immediately, taking some time to move away from the grass they first found.

I am personally responsible, in all respects, for all these beautiful creatures! 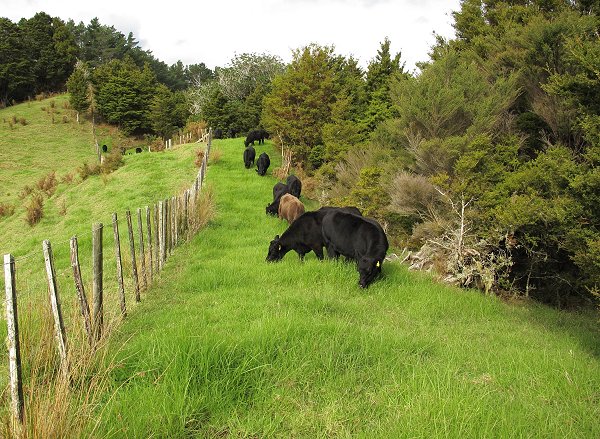 This is a fence-line we'll move at some stage, because there are areas down to the right which need to be fenced into reserves and it will make the most sense to take the grass on top of the hill into the Middle Back paddock (at left).  Eventually, some years hence, a metalled track might run along here, part of the road by which we can travel around the whole farm.  We're planning access for us as we get older and for those who want to come and enjoy the reserve areas and the farm. 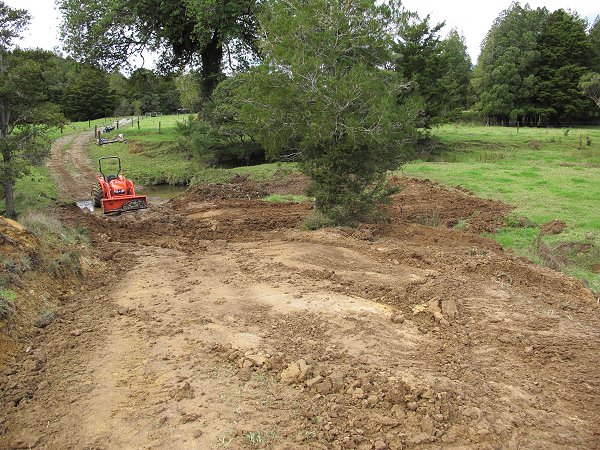 The earthworks continue down by the stream.  The track as it currently exists is too steep down into the river-bed, so needs to be dug back in this direction to ease the gradient.

I hope we don't get any torrential rain for a while! 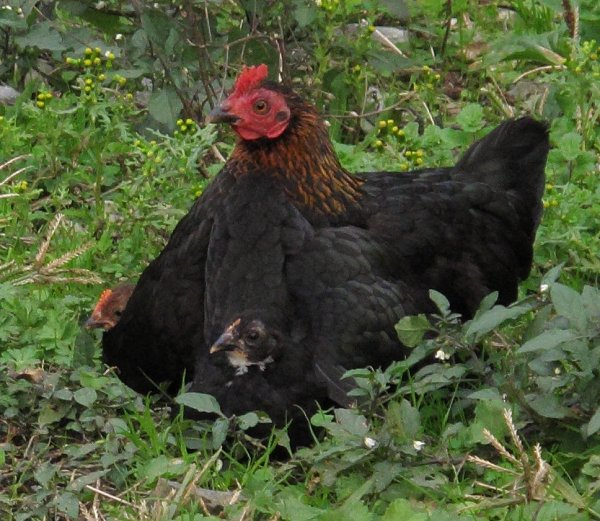 Wearing your mother as a cloak must be very comforting. 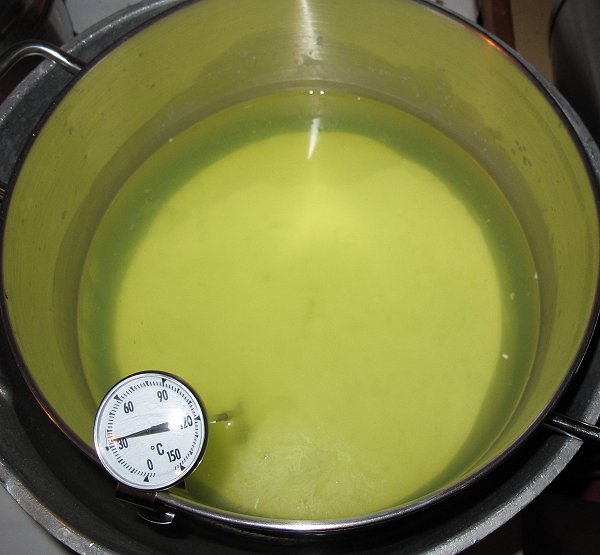 Making Mozzarella cheese.  The curd has sunk to the bottom of the pot, leaving the whey above.

I took the photo because it looked rather interesting.  Most curds for cheese form so that the surface still looks like milk until you touch our cut it. 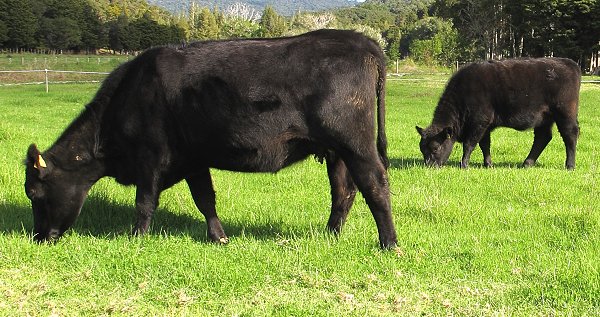 This is the fun of breeding for me: trying to see beyond what is there right now.  Dexie the elder still doesn't look like a very impressive animal, but I think she's going to become a reasonable cow.  Her daughter is probably an improvement on her.  The calf's (adjusted up) 200-day weight is 266kg, with which I'm very happy, from her two-year-old mum. 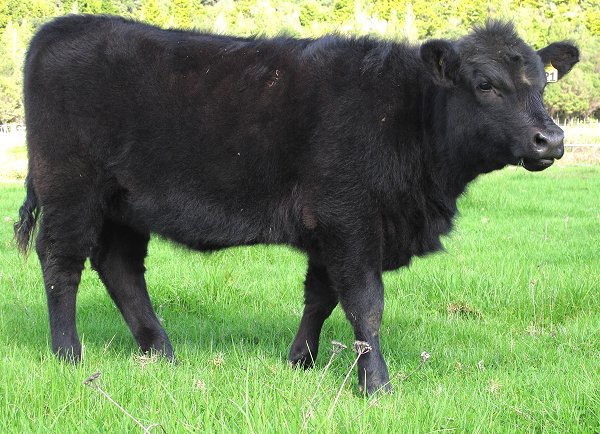 But, please feel free to send me your comments: I know how easy it is to become blind to the real appearance and value of your own stock, when you're with them all the time. 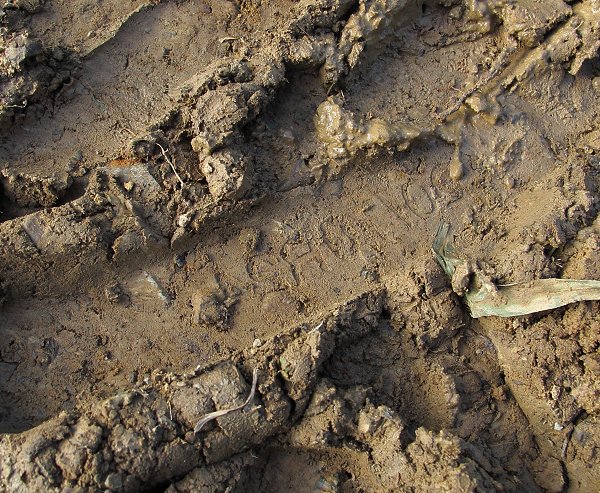 The tractor tyres are still so new they leave letter imprints in the mud. 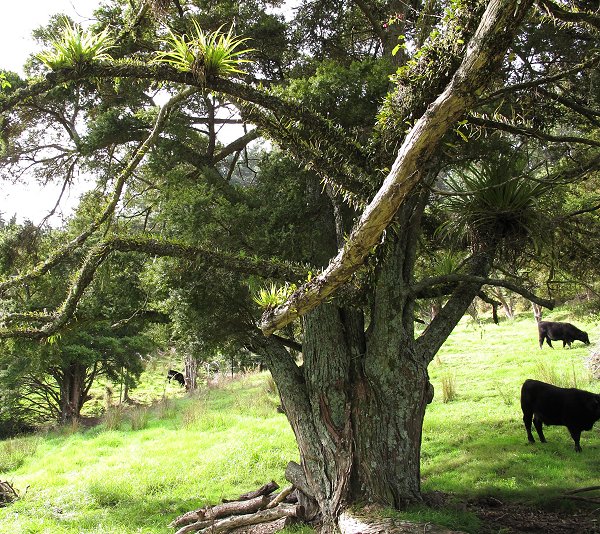 This is a Totara Tree up in the Big Back (North) paddock, which always fascinates me with its thick covering of epiphytic plants.  The small-leaf plants which make the branches look fuzzy are the Leather Leaf Fern, Pyrrosia eleagnifolia.  This is the most noticeably thickly covered tree I've seen around the farm, although that may only be perception, caused by this tree's position out in the light. 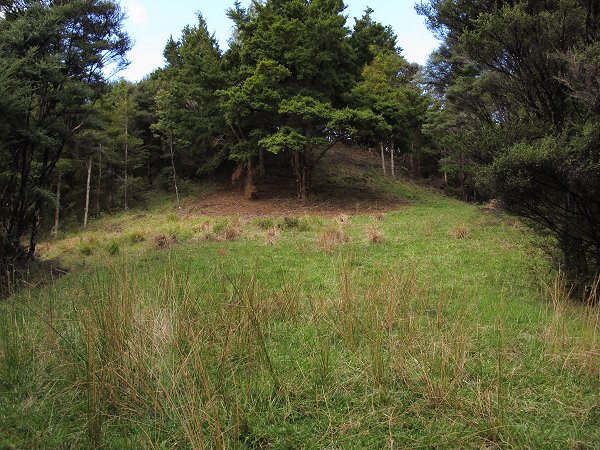 I'll obviously need to revisit that patch of Sedge plants, but I'm glad to see many of them dying as a result of my herbicide wiping a few weeks ago. 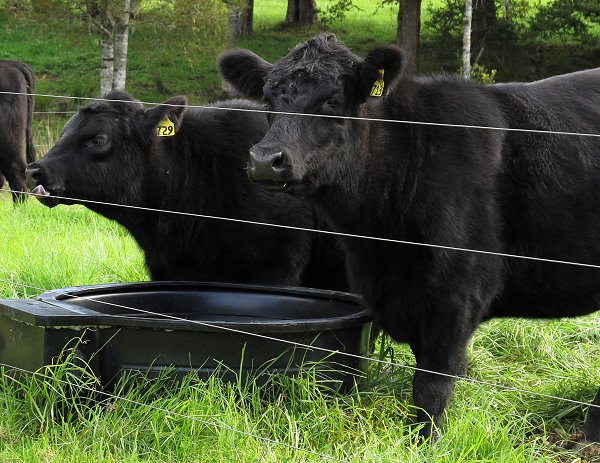 I decided to keep both; it'll be interesting to watch the differences between the two of them, their sires being half brothers.  713 is not in calf, which may have been more my fault than hers this year.  I'll give her another chance next year. 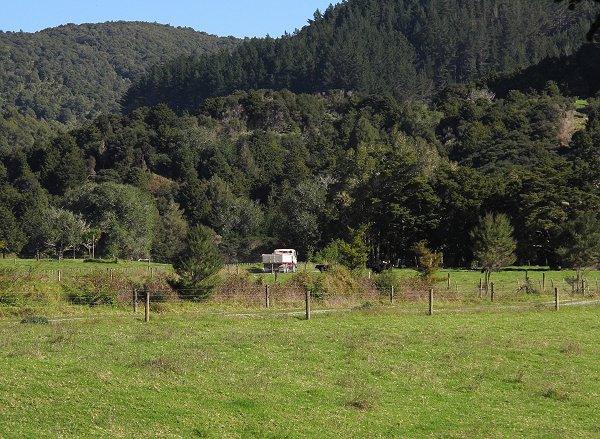 Stephan was having some difficulties yesterday in forming the modified stream crossing.  There's no rock under the edge of the stream where he has dug away the soil to lessen the track's steepness as it leaves the stream, so he kept sinking down into a bog.  We decided we'd get a truck-load of big roading metal to form a proper base there. 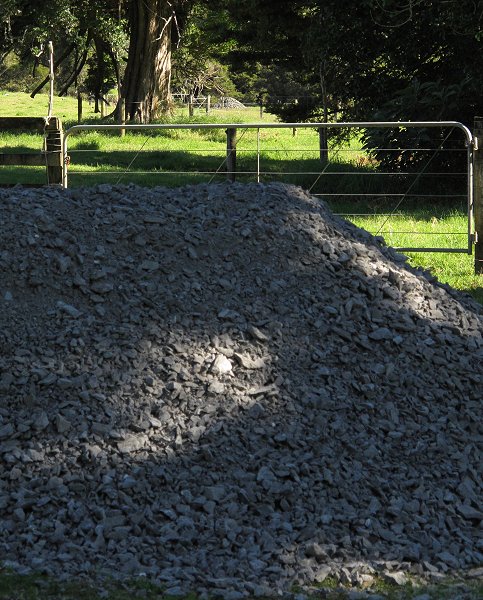 Fortunately the quarry wasn't very busy and the driver came directly out with a load of blue 100mm (in the distance by the job in progress) and one of lime 65mm (for general track fixing and maintenance). 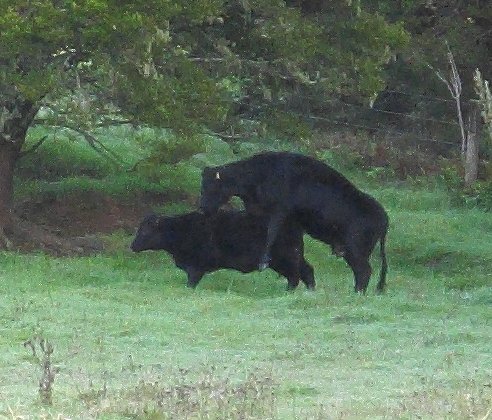 At the end of the House Paddock this morning while Zella was being milked, this excited activity was taking place: heifer calf 121, now seven months old, was on heat and her mother was behaving entirely normally by mounting her.  They can't help themselves.  The heifer is so nicely grown though that her reasonably light mother didn't cause her to collapse under her weight. 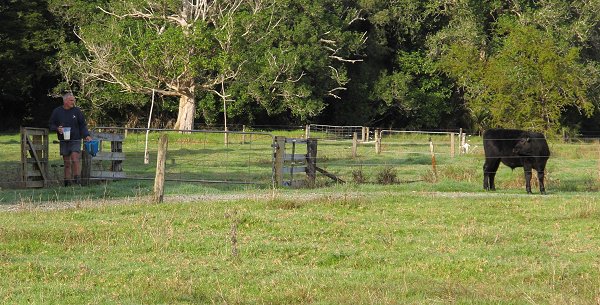 The two male calves had been in the little river-bank enclosure, so Stephan took the orphan calf's feed to him after milking.  But the calf wandered off without a feed and didn't seem much fussed about coming back.  I guess he's weaned then. 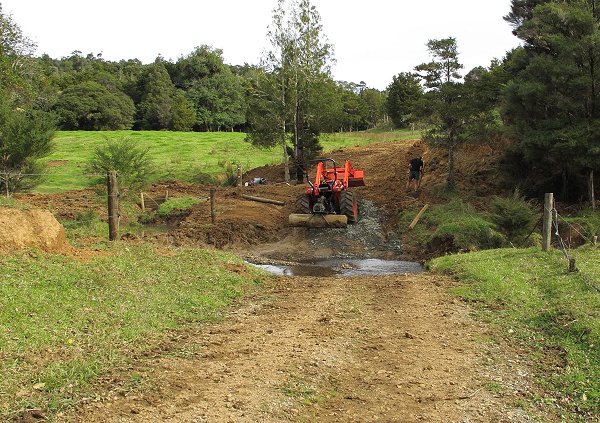 A fence has appeared and most of the roading metal has now gone into the track and has made things much firmer.

I received official notification of my appointment to the Veterinary Council's Preliminary Assessment Committee today, which is very pleasing.  Most of the work is done by email and teleconference where necessary, which suits me well.  The work involves only a few hours in each month, but my introduction to cases under consideration has been extremely interesting. 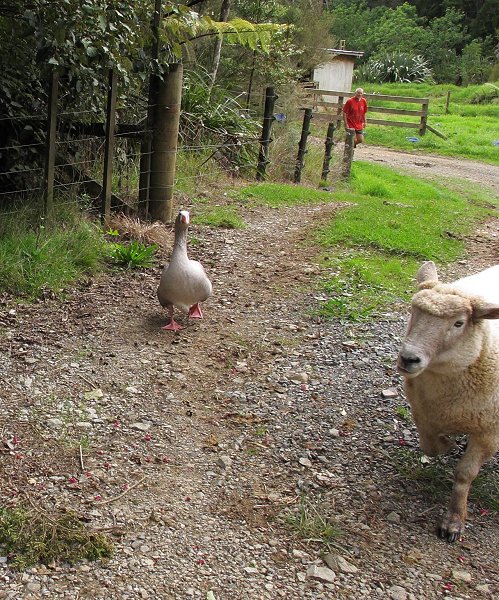 I wanted to get the sheep out of the House Paddock so I can have it back for cattle grazing.  We made sure we moved the Goose at the same time, so she's not left alone again.

That's Dotty in the picture.

Yvette hobbled her way along after the mob, having to have a bit of a rest before she ascended this little slope up to the gateway.  Her time is not long. 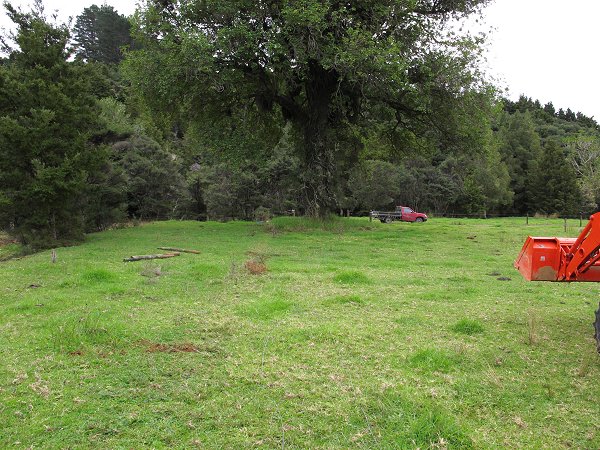 The site of the stream earthworks is just out of the picture on the left and this is the other part of the job: the relocation of the fence between the Mushroom 3 paddock and the Bush Flat.  The fence ran from the left foreground to the left of the big tree - until this morning - and will be resited so that it collects the grassy area to the left in the photo, creating a riparian strip along the river bank.

The protective area around the base of the huge Puriri Tree has always been very minimal, and will now be increased on both sides.  We believe it has benefited the tree to have been protected around its base in this way, but the trees have very shallow large roots and some of them have been being damaged by the cattle on the ground outside the fence. 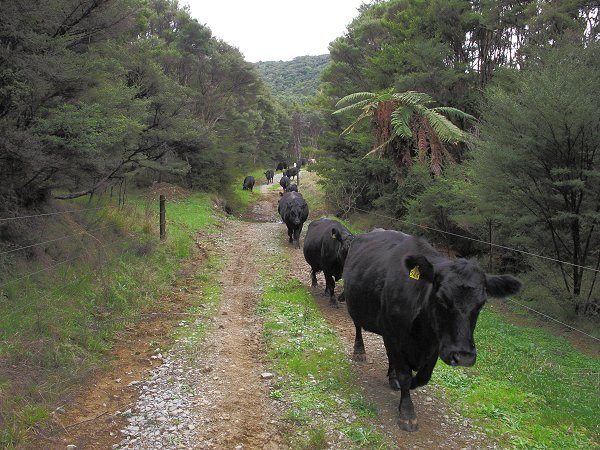 My lovely cows, moving from the Back Barn Paddock to the PW, where Stephan was spending some time cutting Kanuka trees for poles to make a couple of flood gates in the Bush Flat crossing.

I had a telephone conversation today about selling some of my heifers.  Another one in the evening cancelled that arrangement.  A few weeks ago I picked out some very good heifers for someone who came to visit and said they'd like to buy, who then changed their minds a couple of weeks later.  Cattle sales are a process I really don't enjoy. 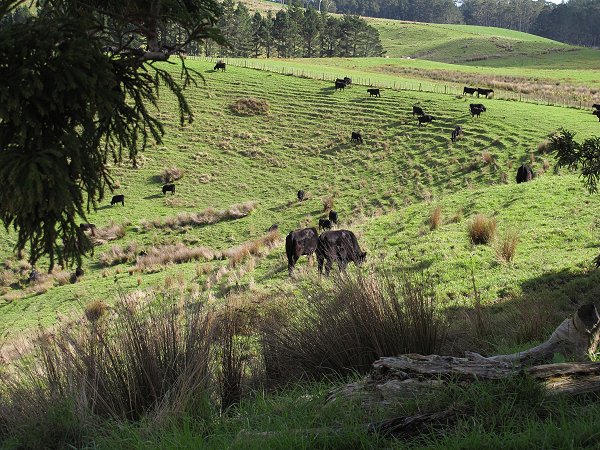 The weather having held fine for this week, Stephan decided to stay at home and continue working while I went to the annual Landcorp Beef Cows 4 Profit field day, this time at Kapiro near Kerikeri.

These were the R2 pregnant heifers, looking all very nicely well-grown. 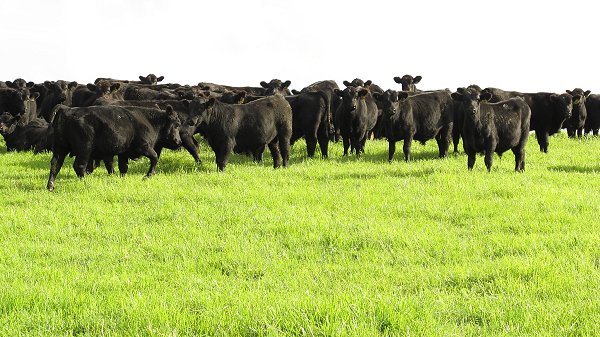 The yearling bulls were an impressive mob.

Kapiro's manager reported a very similar growth pattern in his calves this year to the one we measured.  They grew as normal at 1.2kg/day until the drought really started to bite.  Then, having no grass onto which to wean the youngsters, they were left with their mothers and their growth-per-day dropped to about 8-900g.

It is reassuring to hear that my approach was one taken by a large commercial operation as well.  I wasn't completely sure I was doing the best thing at the time, although there really wasn't much option.

We're both very glad Stephan decided to stay at home and work yesterday, because he's made great progress on the fencing/stream job.

It is unlikely we'll get the permanent fencing finished in the Small Hill area during this season, but we've done more actual fencing than was specified in the Environment Funding proposal, so that'll be ok.  We will need to erect electric tape fences in the Small Hill where the permanent fencing will go, to stop any cattle getting in to the area which now includes a silt-collecting sump.  We don't want that area disturbed! 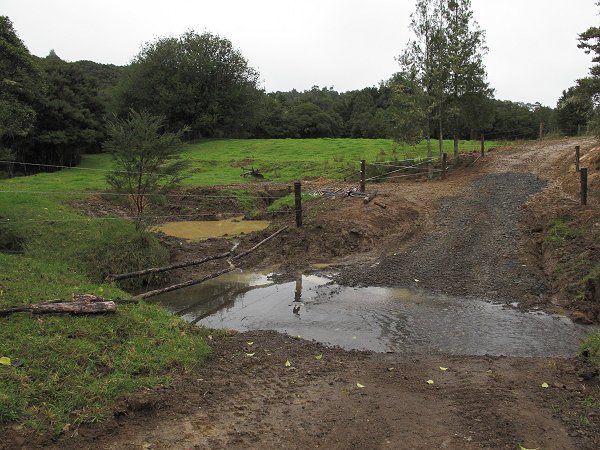 You may recall that the gateway into the Bush Flat Paddock used to open out just in front of the muddy pool on the left, but the new entrance to that paddock is now up on the track (with its criss-cross tape gate).

The ground is very sticky at the moment, but we'll try and get some metal onto the mud before the winter wet sets in, if we possibly can.  I will very likely avoid using that new entrance for the winter, so that it doesn't get churned up.  I'll put an electric tape around the area and the cattle can go in and out through the gate up at the Big Back end.

I weaned Zella and Dexie's calves this evening, mostly because young Dexie 121 wouldn't come along to the gate to go in with her mother, so I put her with the two steers instead; so that's that for the year.

A problem with not getting around to writing these pages until a few weeks after the fact, is that sometimes I forget to put important things in.  On the 17th of last month, Aotearoa became the thirteenth country to remove gender discrimination from its marriage laws.  Stephan and I marked it at the time, but I forgot to record that, something I've now remedied.