I don't seem to have been taking as many pictures as I sometimes do and this may be why: the light is so very bright that it's quite hard to take photos without there being too much contrast between light and shade.  I took this picture after six o'clock and it was still too bright to see into the shadows. 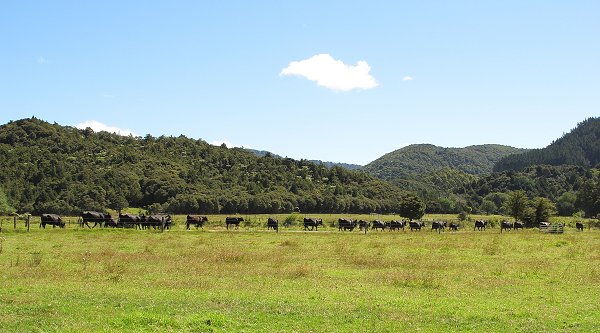 The mob from Over the Road, heading out to the Small Hill paddock. 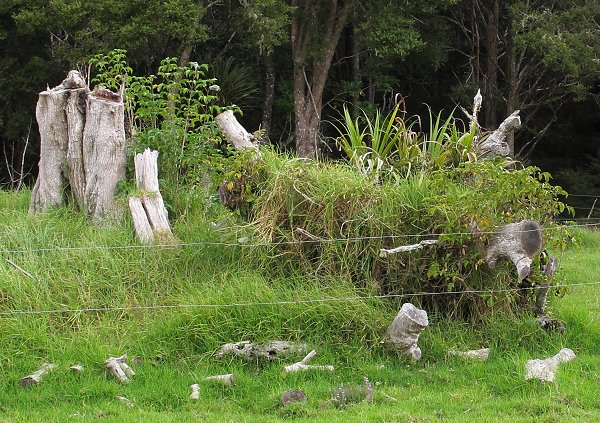 I noticed today that the leaves which had been growing healthily out of the branches cut from the Puriri we felled eighteen months ago (on the right), are now showing evidence of not being supported by any root structure.  In the continuously dry and hot weather, they're starting to wilt quite noticeably, while those sprouting from the main trunk (at left) are not.

While checking the cattle in the Small Hill paddock, I spent some time stroking and scratching Queenly 23's daughter (the one I had to help by bottle-feeding colostrum when she was born).  In her first couple of weeks she obviously remembered that I was a friendly creature, but she gradually forgot and wouldn't let me near her.  But I can often sneak up on cattle and start scratching them before they've realised I'm near them and because they enjoy that sensation so much, they'll often stay put after realising that I'm touching them.  Sometimes they'll then allow me to touch them next time I'm near, but some take more taming than that.

Little Queenly 118 let me scratch all the way along her back, so I imagine she'll tame quite easily. 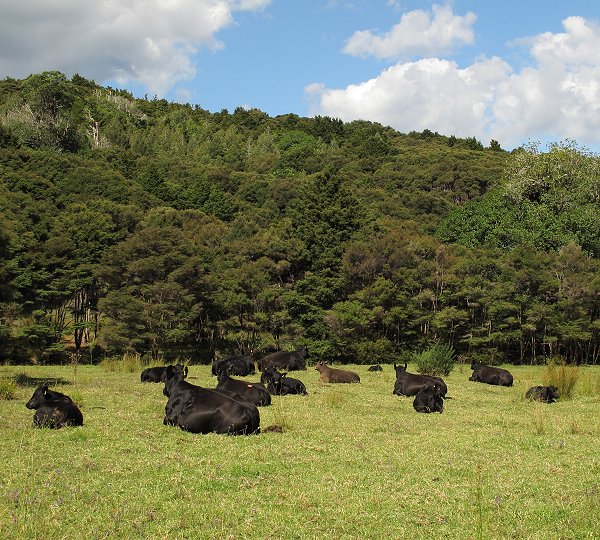 A hot afternoon, yet the cows still like to sit around in the sunshine.  Only one or two were sitting in the shade of the trees along the stream-bank.

In the middle of summer it's a hard thing to see cattle on farms without any shelter from the heat of the day, because one can't imagine that they wouldn't use it if they had access to shade; but if they have ample shade and choose to be in the full sun, that's a different thing altogether. 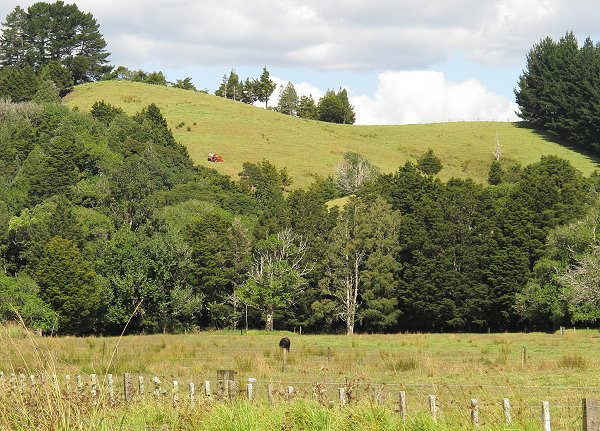 Stephan's been out spraying gorse and Ragwort whenever he can, whenever the air is still enough that there will be no spray-drift.  As soon as the cows have grazed a paddock, he goes in.  I've been picking all the Ragwort flowers while doing my cow-checking walks.

When I mentioned a month ago that I thought the orange glow of the tractor could probably be seen from space, a couple of people sent me some very funny pictures to that effect.  However the size of the tractor in those offerings, wasn't quite as believable as this one on the hill Over the Road. 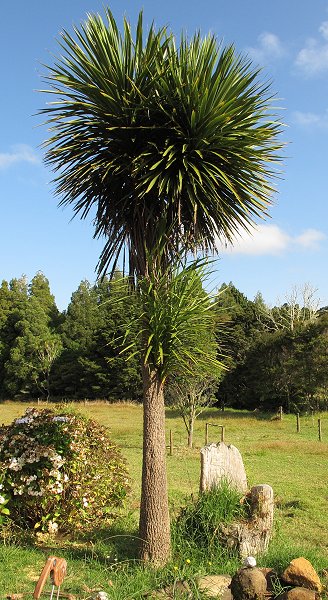 This is the Ti Kouka (Cabbage Tree) in the garden which, last year, grew some shoots out of its trunk.

It's been lovely to watch these trees grow - two of them, one on each side of the deck, where I planted them a few years ago, after growing them from seed.  They're now big enough that sparrows have been nesting in them for the last two years and a few weeks ago there was a possum climbing one.  (I don't want a possum in my Cabbage Tree, but it speaks of its size that one was happily scaling the trunk looking for food or shelter; until it got shot, having made so much noise that it attracted our attention.) 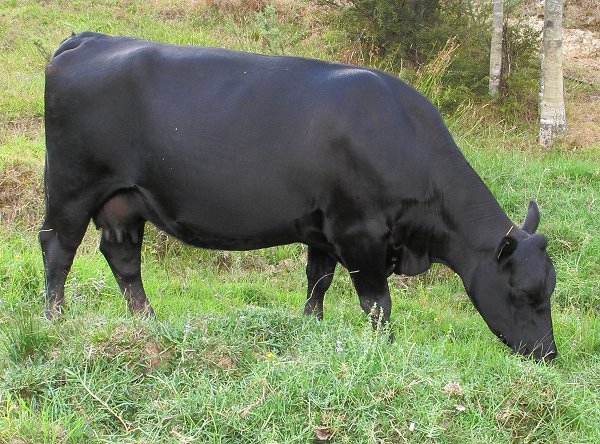 Dinky 94, who also appeared last week, has turned into a far better cow than I ever expected.  When born, she was tiny.  Her growth rates were alright, and at the time I decided on the heifers for yearling mating in her year, she'd achieved a respectable 350kg, but it had been a spectacular season for the heifers and she was still the smallest and I decided not to breed her then.

She's the only daughter I kept of her sire, #60, because he was not his mother's best son.  I used him because he was the only genetic-defect-free bull I had available at the time and while his daughters will have turned into nice cattle, I didn't want to invest heavily in that particular version of his mother, Irene. 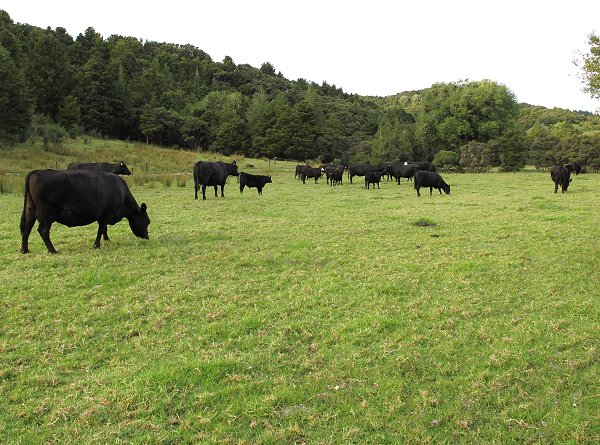 It's getting pretty dry.  Kikuyu grass is an excellent summer feed, since it spreads so thickly and keeps the soil beneath it more shaded than does any other grass, but with no rain for two weeks and nothing really significant since the end of December, the grass is no longer growing very much.

Yesterday morning I got a migraine.  This morning as I woke up I could see the characteristic aura around the edges of my field of view again: a migraine on top of a migraine?  That's simply not fair!

I've been fortunate that the pain of these headaches has decreased in severity in recent years, but today's lot sent me back to bed for the whole morning.  Drugs and necessity made me get up and go out in the afternoon, since cattle needed moving and the move needed two of us to do it. 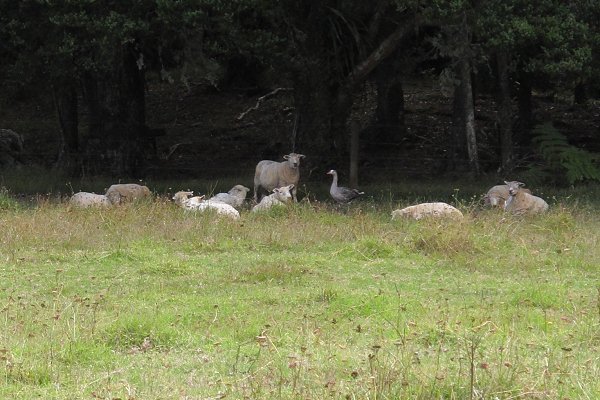 Goose is still hanging out with the sheep.  I am now not certain if I really remember Lenny (who brought Goose to us nearly ten years ago) telling us she liked living with sheep, or if I've made it up since.  She does seem to like being with the sheep though, but doesn't always move from paddock to paddock with them very easily. 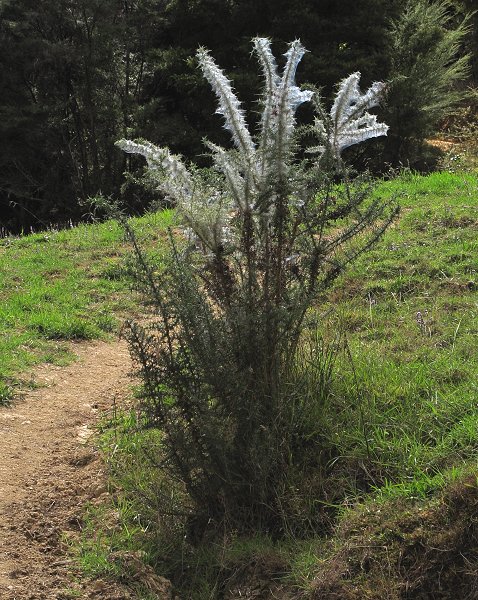 Gorse Spider Mites appear to like very dry environments, which is seldom the case here except in the middle of summer.  They were another of the great new bio-control agents introduced a few years ago, and we brought some home from one of the A&P Shows (in about 1998).  They still only inhabit a few gorse bushes around the farm, having never formed the blanketing population we understood they were capable of doing. 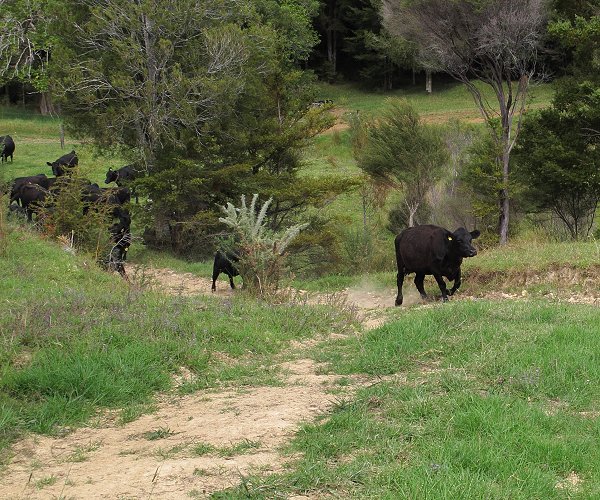 I wanted the cows in the Bush Flat to go directly from there to the Middle Back paddock, which meant walking (gingerly) up the Big Back hill ahead of them and calling, while Stephan followed them to ensure no straggling calves got left behind.

The twins and Squiggles followed me quite closely, all the way to the top of the hill (behind the Pines) and then overtook me along the track at the top of the Big Back paddock. 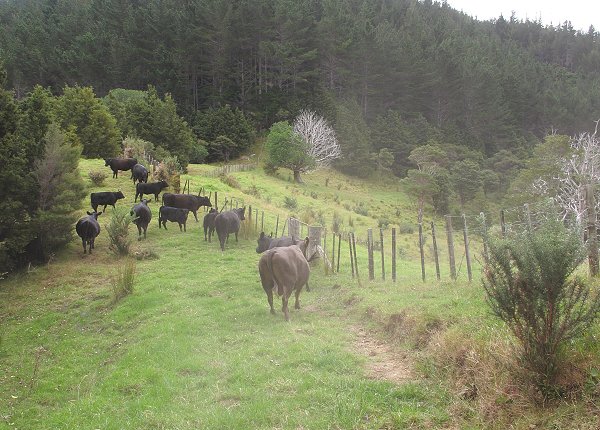 Fortunately they seemed to know where I was taking them and all stopped at the Middle Back gate. 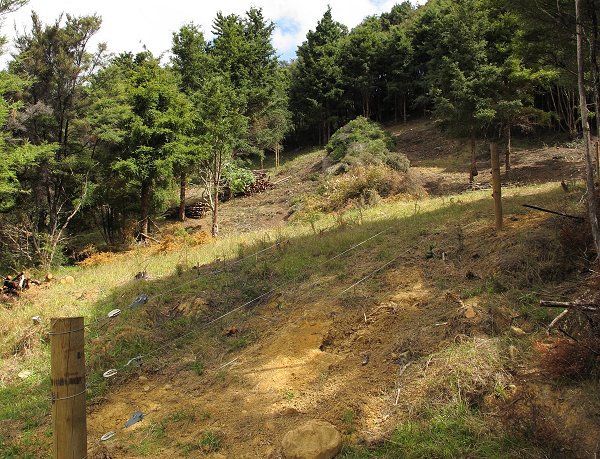 Stephan and I then walked on and down the other side of the Big Back paddock, discussing how we're going to fence the northern side of the big swamp down the middle.  There are lots of Puriri trees, and numerous watery tributaries to the swamp, all of which we'd like to protect.  But it's going to be a big job to work out where to put the fence(s).

Stephan has finished the first bit of fence up to the boundary and Graham has been clearing the slope above it, stacking piles of firewood (if you hover your mouse over the stack it'll tell you they're "stacked tree-tops") to be taken out at some point.  He carefully piles the tops of the trees in such a way that we could burn them, or they can rot down without being dispersed around the whole area. 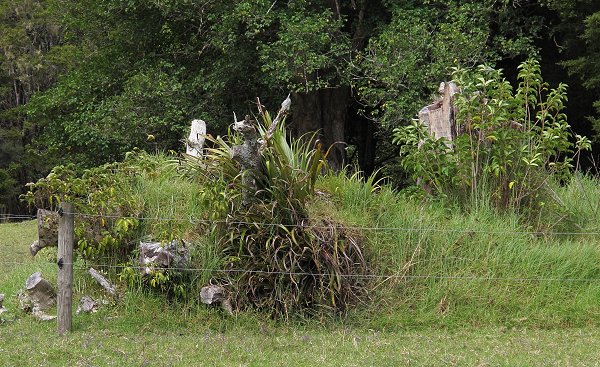 The Puriri growth I photographed on Monday is looking even more dried and browned than it did then.  In terms of population diversity it doesn't matter too much if the leaves to the left shrivel away to nothing, since the tree lives on where it is growing again from the base of the trunk. 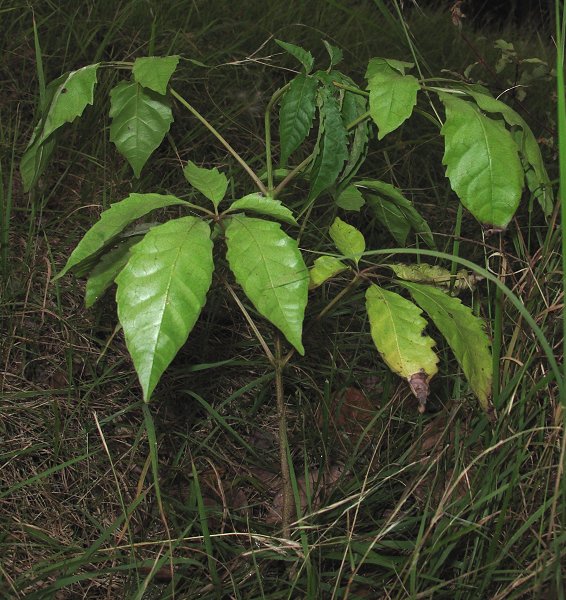 When I'd finished checking the cows in the Middle Back this afternoon, I climbed through the fence to have a look around the PW Reserve area.

This little Puriri seedling looked so sad, I tipped out my tiny camera-bag drink bottle around its roots - all 75mls of it. 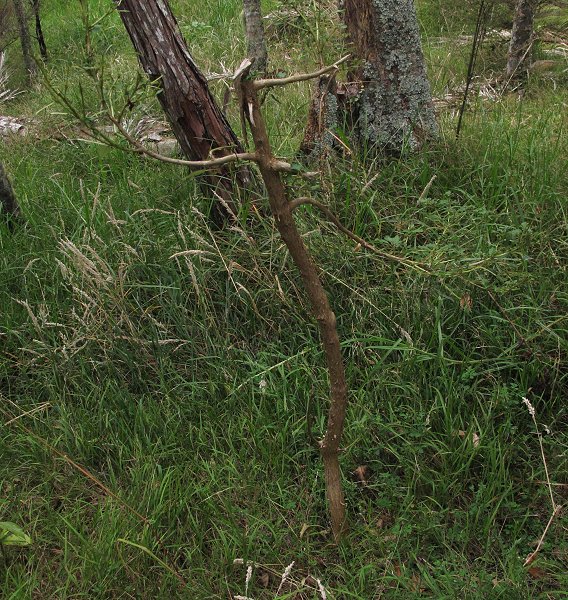 This is all that remains of a Tree Fuchsia I found back in August; something has obviously been eating it with gusto!

There's another one just a few metres up the slope, under a Puriri, which is untouched.  I wonder what's had it? 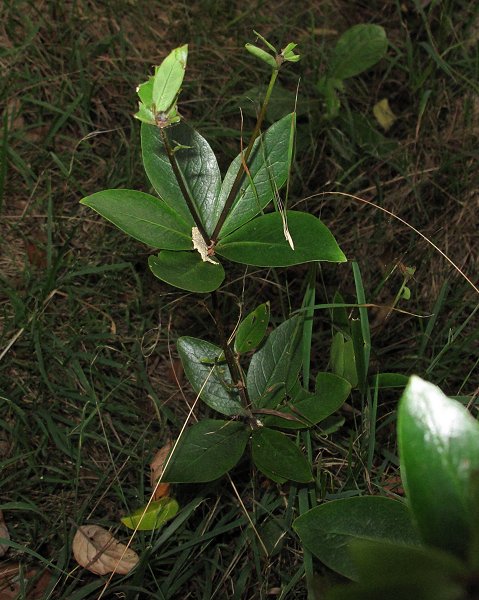 This plant caught my eye, with its distinctive leaf arrangement.  It looked oddly slightly familiar, but also potentially very wrong in this environment. 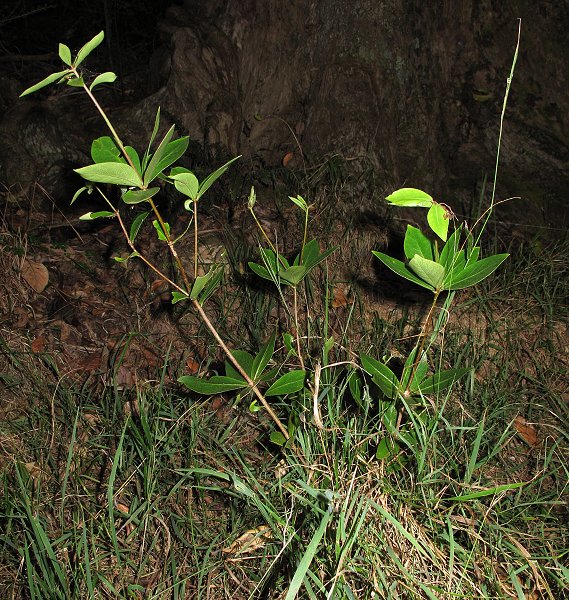 A picture of the whole plant.

The leaf arrangement is a whorl, which I thought would make the plant easy to identify.  I searched through every internet reference to plants with whorled leaf arrangements and through my native tree books, but could find nothing.

Then I posted it on the lifestyleblock.co.nz discussion forum and after a few days, clever Sue (our Murray Grey breeding friend from Levin) managed to identify it as Pittosporum cornifolium a usually epiphytic plant which is relatively common around the farm and is present in the Puriri above this ground-growing plant.  If I'd thought to look at the epiphytes section of my tree book, I would have found it.  No wonder I thought it looked a bit familiar, having found a low-growing specimen a couple of years ago on Jane's place when we were walking around in the bush. 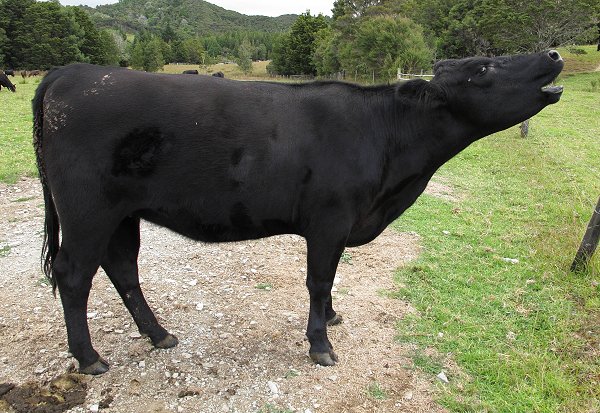 713 began calling so stridently this afternoon, that I thought one of the calves had become stuck somewhere it shouldn't be.  At this time of year, this sort of behaviour is not common, signalling that the heifer was coming on heat: she is not in calf.  That's a disappointing bit of news.  I inseminated her on her first heat during the mating period and she came back on heat with the bull later. 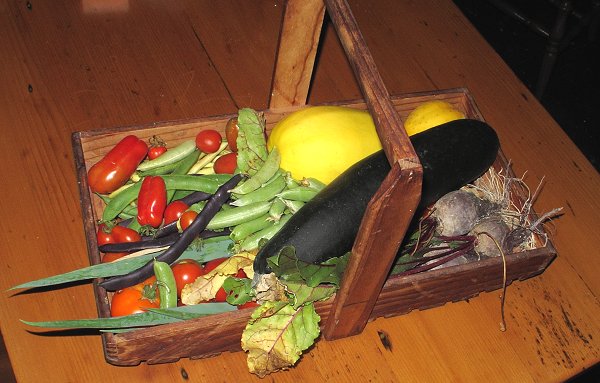 Stephan arrived home with this basket of produce from Lilo and Peter's garden.  What a lovely present.  We'll return the basket and eat the contents.