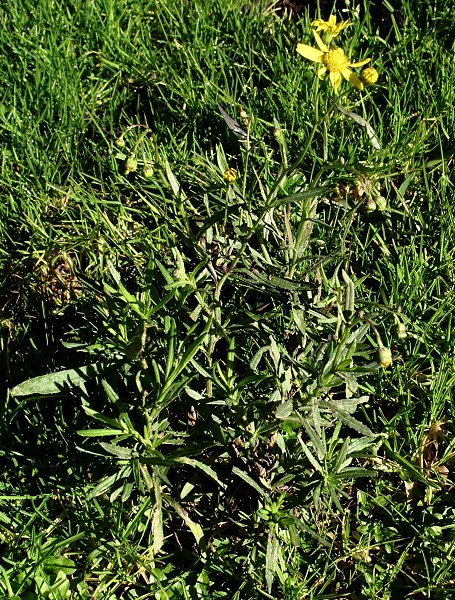 There's possibly a trick to photographing green plants against the background of other green plants, but I haven't figured it out yet in this situation.  This is one plant (and fortunately it does appear to be only one) I really don't want to see growing here: Gravel Groundsel, Senecio skirrhodon.  The seed would have arrived here in the track metal and I hope it doesn't have any more relatives nearby.  I think it's going to become a real problem plant for all Northland farmers, eventually, but the longer we can keep it out, the better.

I spotted it as I turned back to fetch some straggling cows as we all came along the lane.  I checked carefully along that whole stretch and saw no more.  I pulled several plants out in the months after we first had the metal laid, but haven't seen any more for a while.  I really hope it didn't end up near the streams, which could mean there are plants establishing secret populations in places I haven't discovered them yet.  I might have to do some walking through the streams in the bush reserve areas, to make sure. 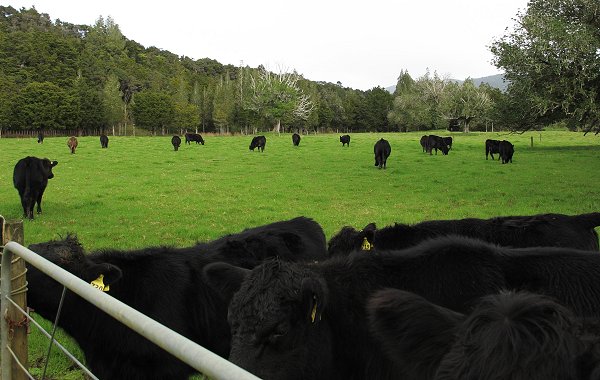 I am pleased to be able to put the heifers into good paddocks of grass still.  Feed will get short, but not yet. 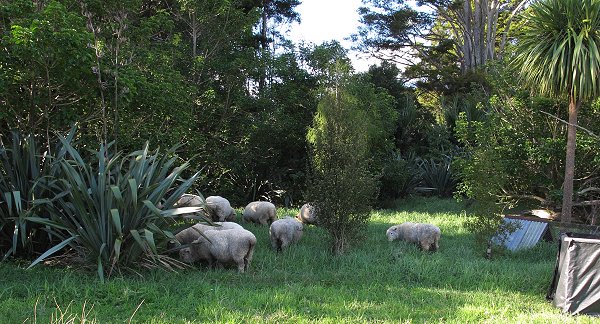 The sheep are always a bit of a pain to feed through the winter, not being my primary focus.  Stephan and I had discussed the possibility of putting them into the area around the pond, now that most of the trees are well grown, so today Stephan put protective frames around the newest ones and set up some gates to keep them where we wanted them and everything was looking pretty good for a while ... and then they started breaking out through the electric fence into the House Paddock!  There's not nearly as much feed there.  Stupid animals.  We had to abandon our plan and put the last of them through the garden gates to join the rest of the mob. 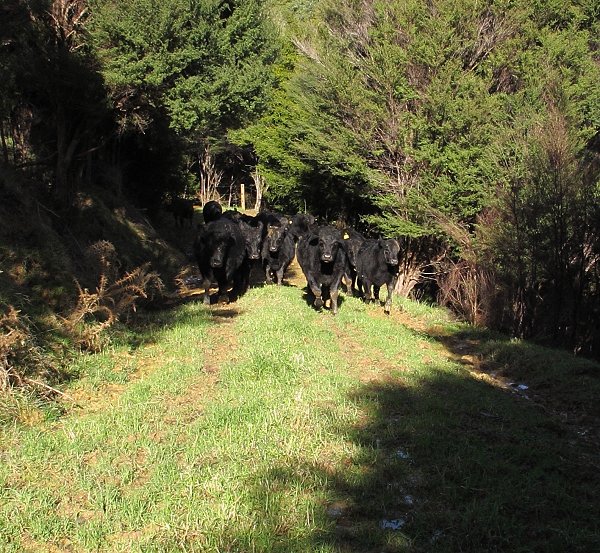 With Stephan behind them, I led the heifers up through the Big Back North this morning, to go to the Middle Back paddock, which hasn't been grazed for six weeks.  They're pretty good at following a call and when they all started running ahead of me, I thought they'd figured out where we were going ... 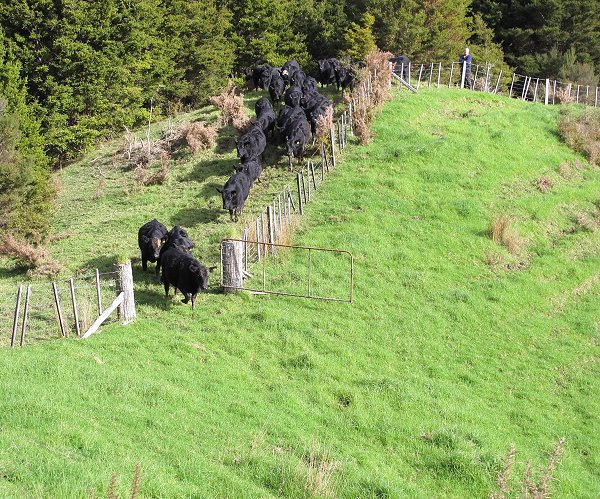 ... but at the top of the hill, they had all run past the Middle Back gateway!  I called them back for a while, but Stephan had to go around behind them and prompt them to return.

I've started putting Iodine in the cattle troughs again - just a capful each day.  I've been doing this each year during the winter in particular to ensure the pregnant cows have enough for their developing calves.  We've always had Iodised table salt because of the lack of Iodine in our soils and I've often wondered why Iodine supplementation to farm animals is not routinely practised. 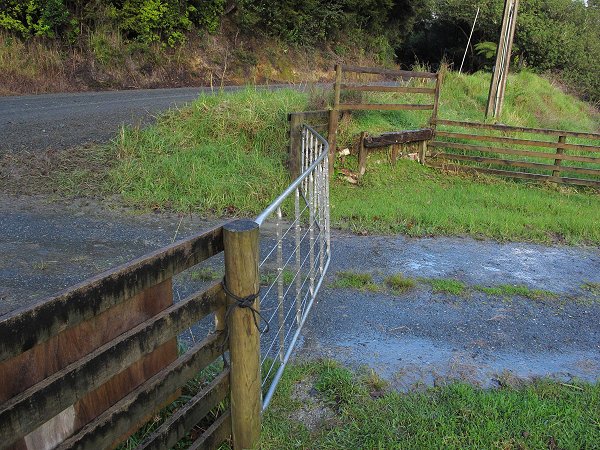 Somebody (known to us) drove into our front gate!  I suspect there was an issue with the significant drop from the new road metal down to our driveway level, but it was not the cause of the problem.  There will have to be a new gate, because this one is bent in two planes and won't ever look right again.

We put these gates in several years ago and have enjoyed having a reasonably tidy front entrance.  Realising the potential for damage, we bought the economy model gate, because even a heavy-duty one of this length would be inclined to succumb to applied force and would be much more expensive to replace.

I've just had a look to see when we did the entrance work and am astonished to find it was in 2002! 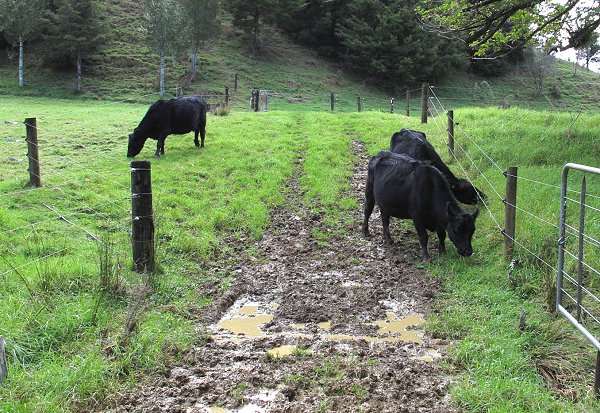 Every time I move the cows, there are three or four stragglers: Demelza 21 and her daughters, Eva 81 and Emma 93.  Often they're joined by Demelza's sister, Dinky 94.  Dawdling is obviously a family trait. 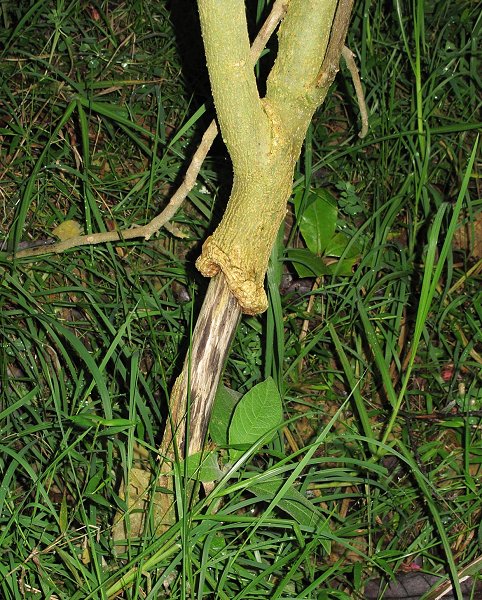 I ring-barked this Woolly Nightshade tree a few weeks ago.  It's interesting to see how the tree has attempted to heal the wound.  I'm told these trees will usually resprout from below the ring, but this one does not appear to have done so yet.  I'll check on it again when next here. 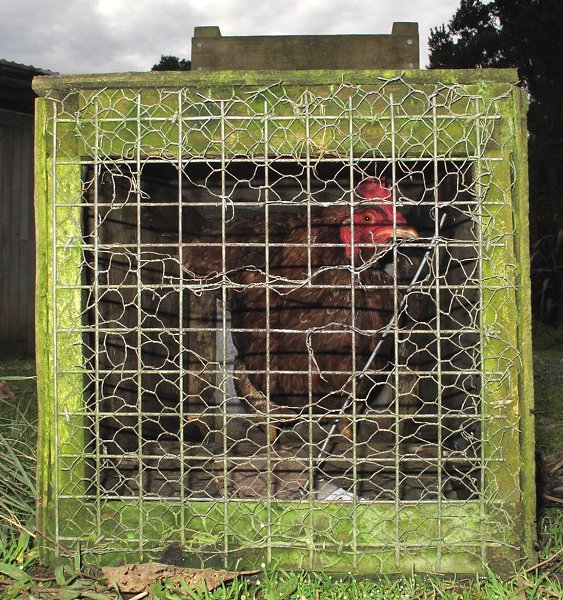 You weren't expecting that were you, Mistress Hen?

There has been a stray cat around outside the house over the last few evenings, so there are a couple of extra live-capture traps set with cat food inside.  The hens like the same food and this one got a bit of a surprise during her snack.

Today was dark, rainy and cold. 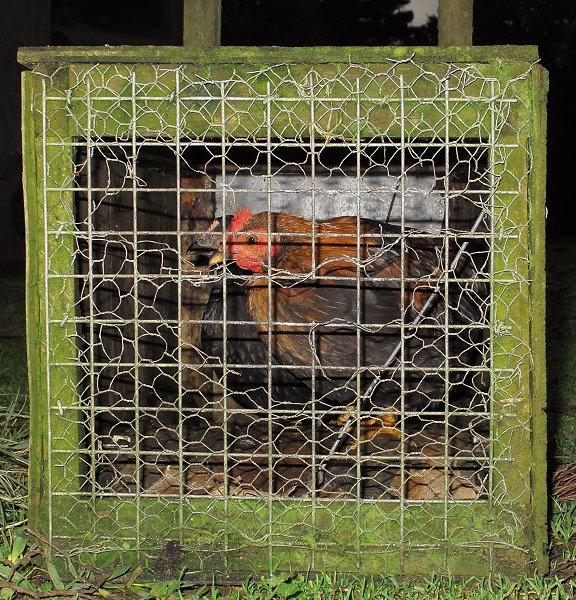 I noticed the bantam mother sitting on top of the cat trap early this morning and wondered if we'd caught one of her chicks.  I didn't expect we'd have both of them.  Silly, funny birds. 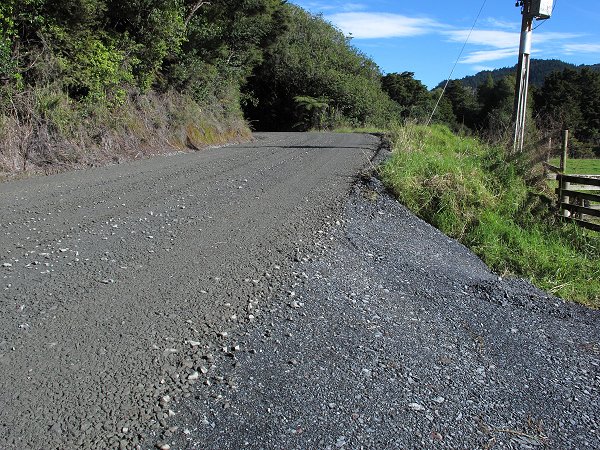 That's better.  The road crew have added some metal to the edge of the road to smooth the approach into one side of our driveway.  Despite using the other part of the round-about to park the big roller machine over a couple of nights, they haven't fixed up that side.  We would have appreciated it had they done so.

After spreading two thick layers of blue stone, the top layer appears to be lime-rock.  I wonder how long it will last as a nice driving surface? 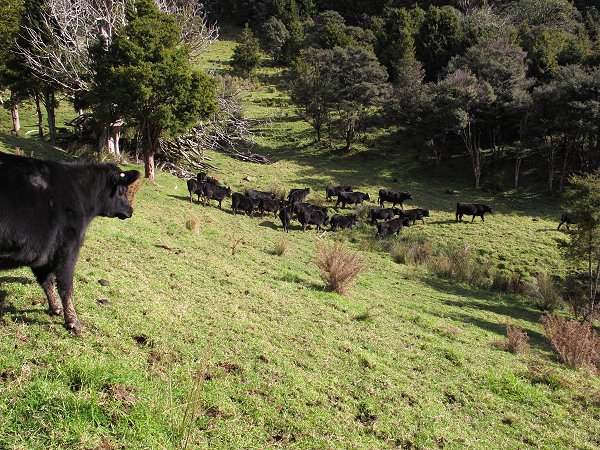 The weather is fine and looks like being so for a day or two, which is what I was waiting for to get some pour-on drench onto the cattle.  I went out the back and sent the cows on their way in to the yards, then went back out to fetch the heifers as well.

The heifers, in the Middle Back Paddock, seemed quite happy standing around in the warm sunshine on the side of the hill and took a bit of convincing to move down.  Once they started going, they were away.  I led them through the Back Barn Paddock and then sent them along the lane. 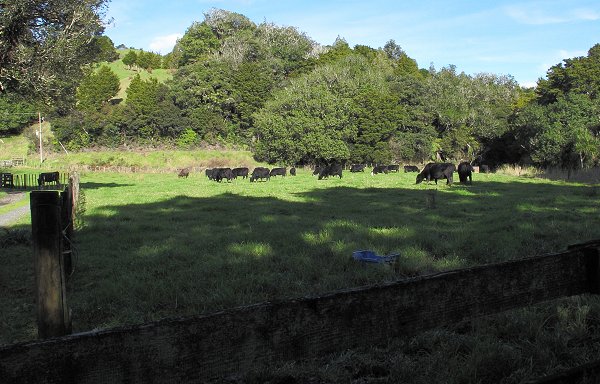 The cows had all gone ahead, but when I went out to the yard area I couldn't see any of them - then realised they were all in the Pig Paddock where Zella and Dexie were grazing.  I'd forgotten that the gate at the end of the paddock wasn't latched properly after the two cows had gone in there this morning.  There may have been some sort of head-to-head argument through the unlatched gate, which led to it being opened enough for everyone to go in.

I decided to give up on working with the cows for the day, because it would be almost impossible to get them out and away from all that nice grass and I'd lose too much time.  I brought the heifers in to the yards instead and put the pour-on drench on half of them.

Once upon a time, all the animals would have been drenched together, but these days it's much more sensible to be selective and drench according to actual need (as determined by Faecal Egg Counting) or presumed need as determined by the weight-gain or body-condition of the animals.  Drench resistance is now common on most cattle farms and I have reason to believe our parasites have gained a level of resistance, so I want some of the cattle to continue to host a full complement of parasites so that we don't only end up with the ones which are resistant to the drench we're still using.

Later on I had to draft Zella and Dexie back out of the Pig Paddock because some of the other cows were seriously harassing them.  They'd been quite peaceful for a few hours, but as the cows started looking up from their lush grazing, they noticed and took exception to their two new herd-mates - even though the two had owned the paddock first.  Zella holds far too important a role here to be subjected to ill treatment by anyone!