What a stunning day for orchid spotting!  It was sunny and warm without too much breeze, so that any orchid ready to bloom was open to the sunshine. 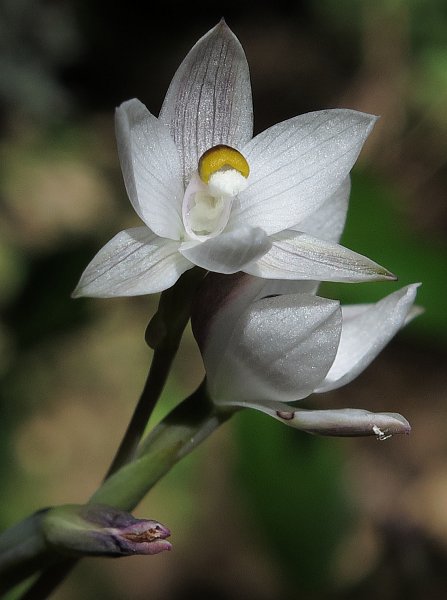 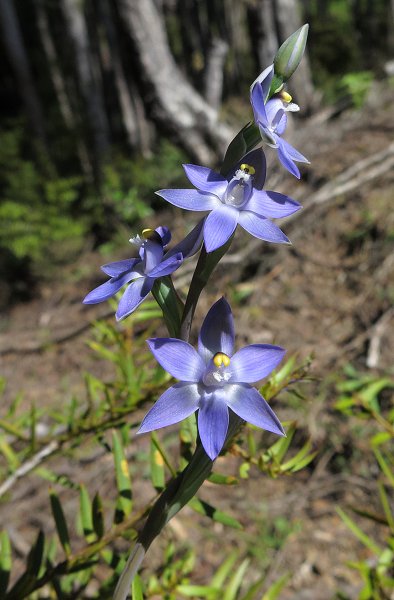 On the Puriri trunk in the Middle Back the little white orchids were still blooming brightly.  When I went to check on an area in the Swamp Paddock, I saw little purple splashes of colour all around me on the grassy, scrubby slopes.  So many plants I'd not have known were there on a duller day.  Those with multiple flowers open on the same stem were particularly lovely. 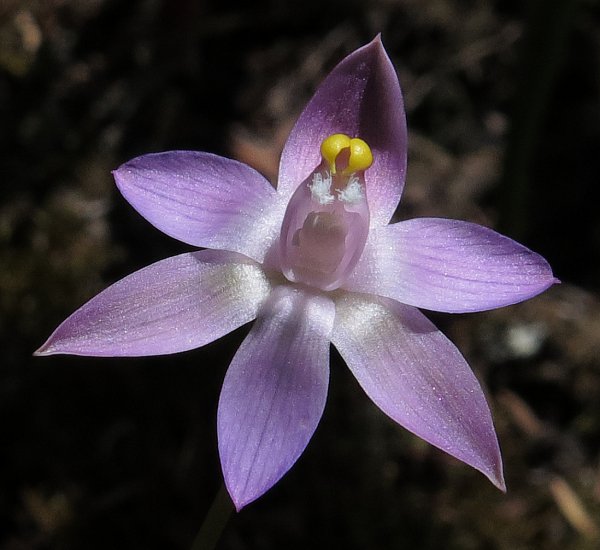 Wide open in the warm sunshine.

These pinker ones are up in the top of the Big Back Swamp reserve, growing along another fallen Puriri trunk. 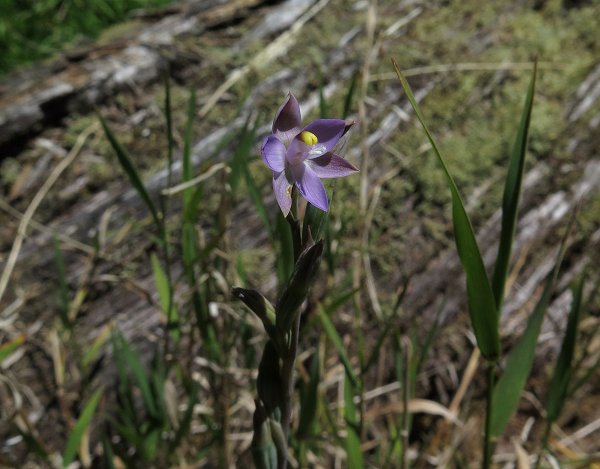 When I'm taking all these photos, I'm mindful of the short amount of time there is to see the flowers, so the photography of them becomes very much the point of the visit because of the brevity of their blooming and because they're so small that looking at them is easiest and most enjoyable once they're presented in larger form on my computer screen.  If ever you'd like to see a larger version of a picture, please ask. 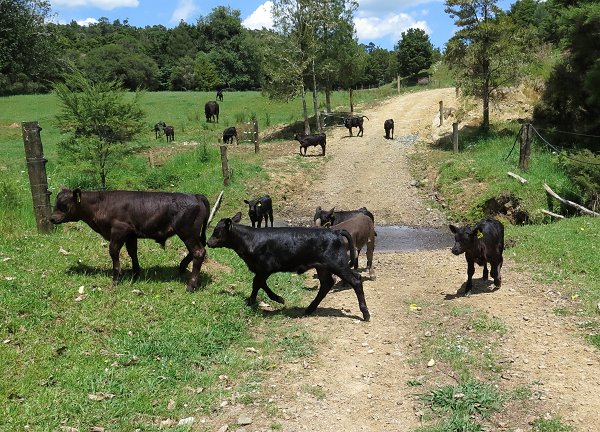 I didn't quite manage this mob's move well enough this afternoon.  These are some of the calves from the mob of 14 pairs, on their first move across a stream.  One calf went off under the fence along the Mushroom lane and got in the way of the two bulls, so I had to go back and turn off the electric feed, and in the mean time the mothers of these calves went off into the new paddock without them and having not met a stream before, the calves wouldn't cross it without their mothers there to demonstrate its safety.  I had to make some extreme alarmed calf noises to get their mothers to return to the crossing and take them with them into the paddock.  If I didn't ensure they crossed, the calves would have wandered back to where they'd come from, hoping their mothers were there.  There's some logic in that, just not a helpful version in this situation. 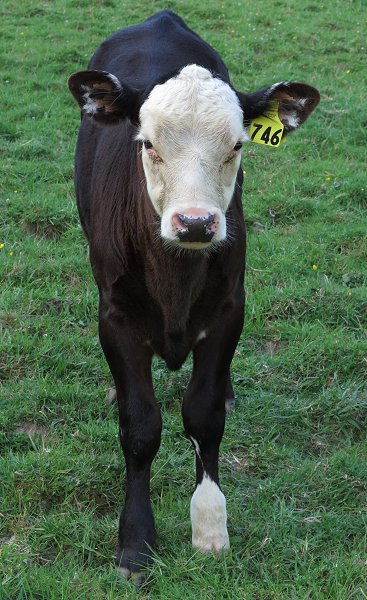 The trouble with white is that if you don't pay attention to your appearance, you can look rather dirty!

I wonder what this face smells like?  I have assumed much of the dirtiness is due to milk residue, but thinking about it, it's just as likely the dirt of the underside of her mother when she's feeding.  There's a lot to be said for wearing dark colours.

This calf is proving nicely calm so far, without any sign of the awful wildness of her similarly-marked 2010-born sister. 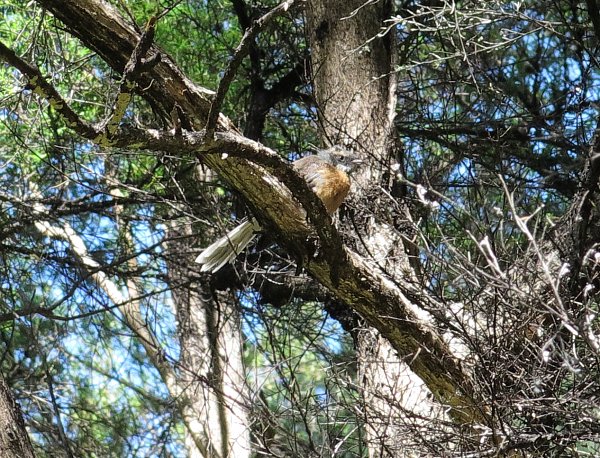 Fantail chicks are different colours from their parents, with much more orange around the breast.  Both parents of this chick were catching insects and bringing them back to their baby. 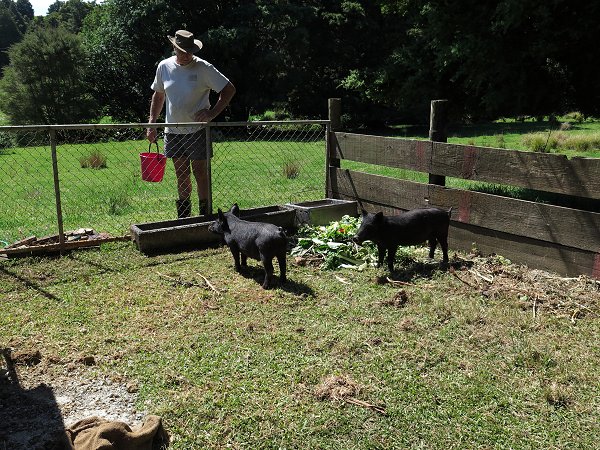 The pigs are becoming increasingly settled, although still easily startled by someone they don't recognise. 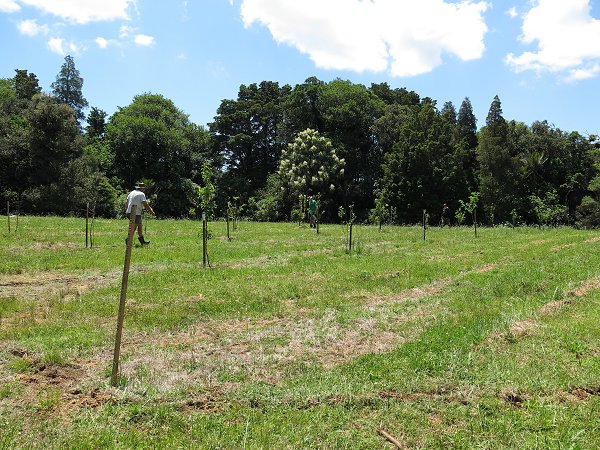 Stephan and William spent several hours today setting up an irrigation system in the orchard, so that we will be able to turn on one tap to water all the trees at once.

The flowering tree in the centre background, is the lovely Cabbage Tree on the river bank.

We had 18.5mm of rain overnight.  What a relief.  I was beginning to worry, anticipating that our feed would start to get pretty short if the dry conditions continued. 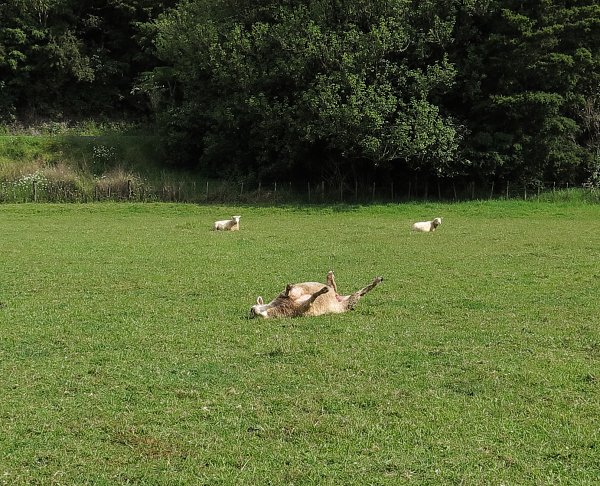 It rained; did that make her capsize?  The oft-cast ewe hasn't needed to be righted for some time, until today. 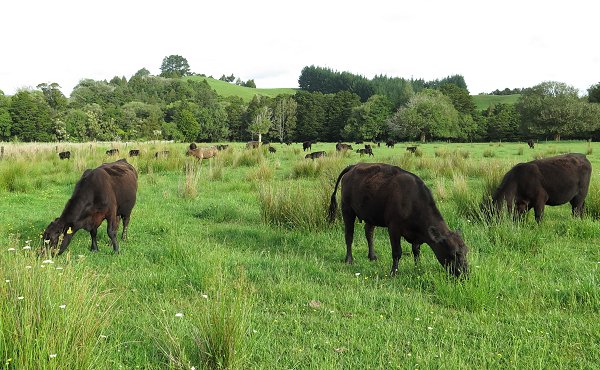 It's lovely being able to move the cattle onto fresh pasture at regular short intervals.  Now that we've had some rain which will result in significant growth, I feel more confident in moving the animals around quickly.  Without rain, there would be less and less ahead of them.

I watched Gem 698 (middle) as she was chewing her cud this afternoon and noted that she still has all her first teeth in place.  Wondering if both twins would lose their teeth at the same time, I then checked on Meg (left) and saw that her first central incisor is on the move - either loose or being displaced by the new adult tooth erupting beneath it.  Emergency 111 (right) has already lost her two central incisors and has two large adult teeth moving into place.  They often start out quite crooked and gradually straighten up.  Emergency is in good condition for a recently-calved heifer without all her teeth in place.

It always amazes me that those now small-looking teeth looked just as huge in their mouths when they were small calves, as their new adult ones do as they come up now. 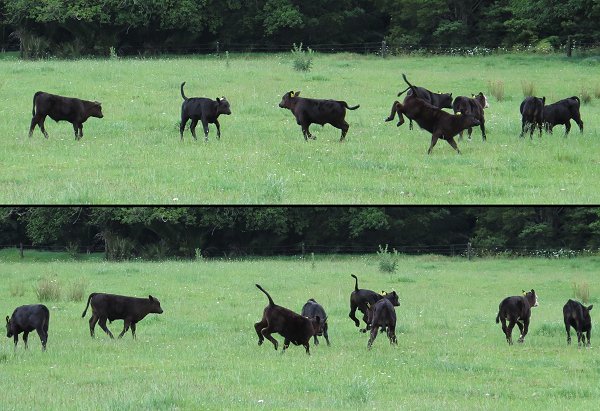 The calves are so much fun to watch.  When they're little and happy, they often dash around with their tails straight up in the air.

I've been moving the cattle in the evenings when I get home, then watching them for a while.  This is the 20 pair mob, previously out the back of the farm, but I've sent the other lot out that way so the calves can learn the farm and this mob has been getting all the fast-growing feed across the flats. 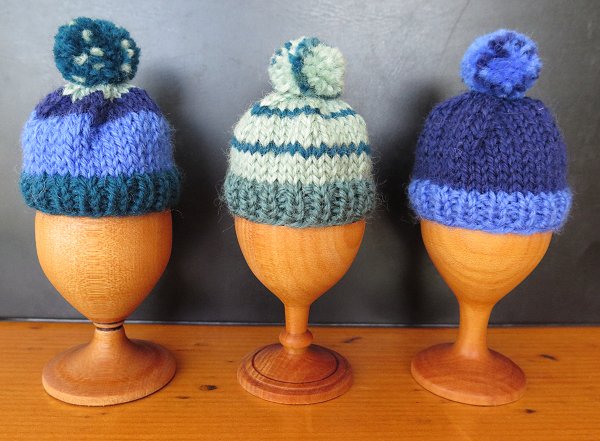 A few weeks ago I received an email from someone who'd found our long-outdated Crafts page and decided she'd like to give someone some eggcups with hats!  Bearing in mind that November is my absolute busiest time, I was tempted to tell her we couldn't do it, but I thought it might be fun and not take too long.  The longest part of the process for both of us was creating the best prototype.  It's years since I knitted a small hat and couldn't find the pattern I must have used last time, and I also now knit such things on four needles in the round.  Stephan has done a lot more wood turning since those early eggcups, so it was a new creation for him, too. 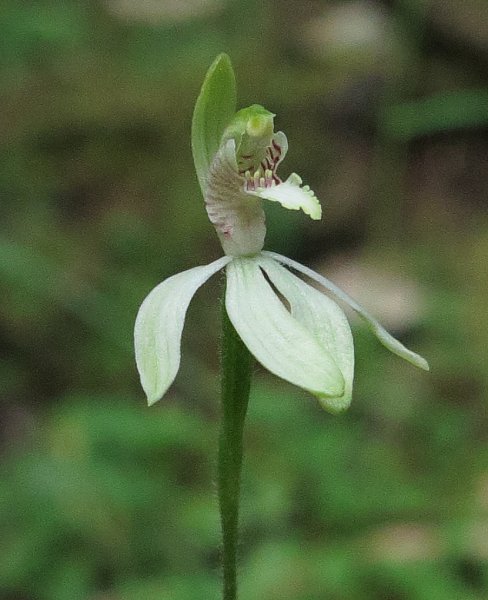 I only took photos of one subject today and this was it.  I sat on the treed southern slope of the Back Barn paddock and watched the birds and looked at the plants around me.  Having had only a morning exam session to attend, I spent a relaxed afternoon, wandering.