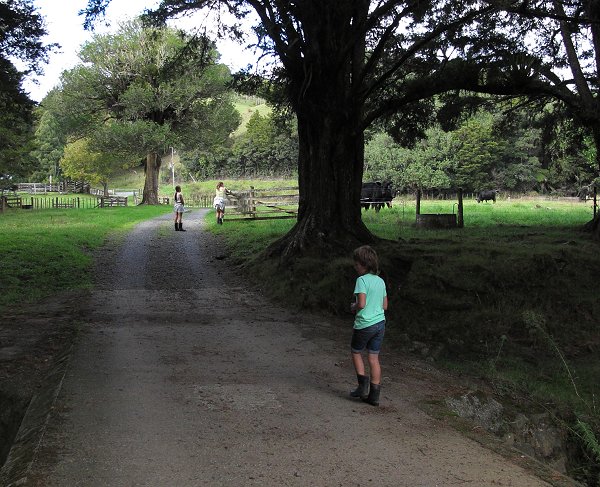 The girls, putting Zella and her companions into the Pig Paddock for the day, after milking.  Jasper might have been playing a solitary game of Pooh Sticks. 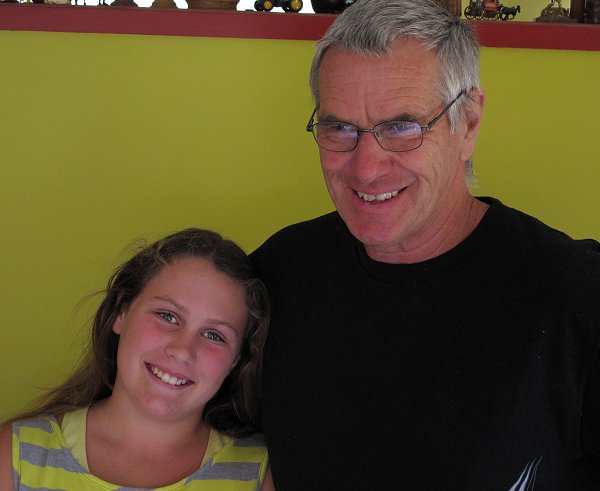 I took a picture of Daughter and Daddy, before Ella packed up to go home on the airplane after lunch. 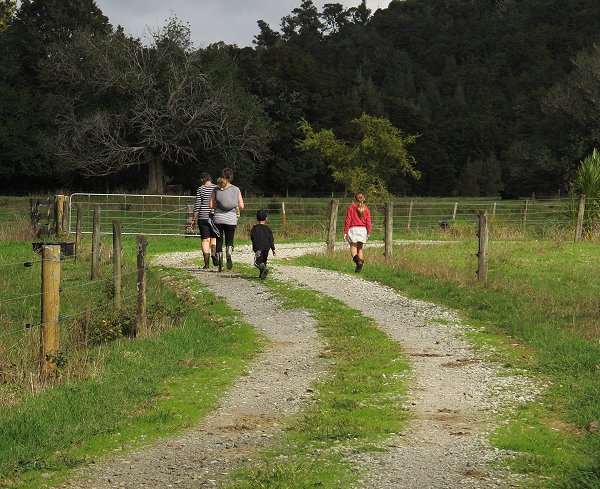 Elizabeth, Sarah and the two boys arrived just before Ella and Stephan left.  They took Stella with them for a walk out to have a look at the Big Back reserve fencing project.

Stephan took Jasper with him to put Ella on the plane.

Once the walkers had reached their destination, Stella set off for another solitary walk, but I had a frightened-sounding call on the radio not long afterwards when she said she'd seen "an orange monkey thing" running near her.  (We eventually decided it must have been a stoat - and I took the children in to the Regional Council office on Monday to show her the sizes of the stuffed examples they keep there, to confirm the creature's probable identity.)  Stella decided to rejoin Sarah and Elizabeth and came home with them.

In the evening I weaned another six cows and their calves. 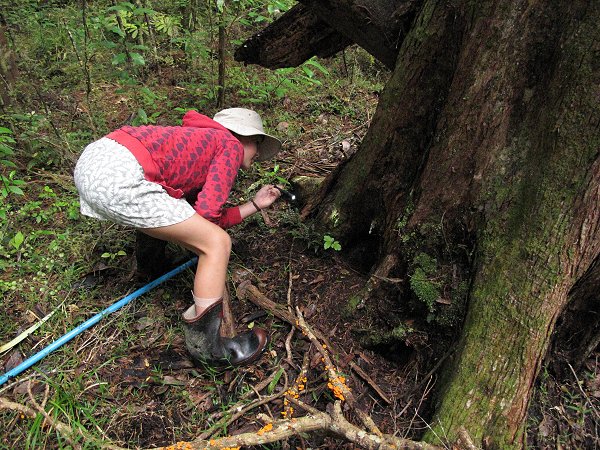 Stephan had taken Jasper with him on the tractor, out to the fencing project and later on Stella and I wandered out to find them.  We went through the bush reserve in the Bush Flat Paddock and I told Stella the names of the trees we found.  She has an exceptional memory for such details and asked to be tested on their names as we found them again on our walk.

In the base of this Northern Rata tree is a deep hole, which Stella wanted to check for inhabitants, so I gave her my torch.  We couldn't see anything inside though. 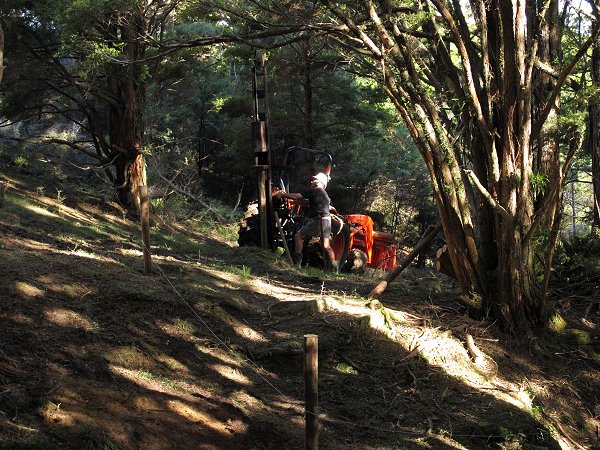 Stephan was thumping posts in a section of the fence which goes up from the swamp and around an area where there are two or three big Puriri and a couple of deep water courses, one of which appears to run permanently and is quite deep in places.  We want to do two things: protect the water from the animals and protect the animals from the deep gullies where the water flows. 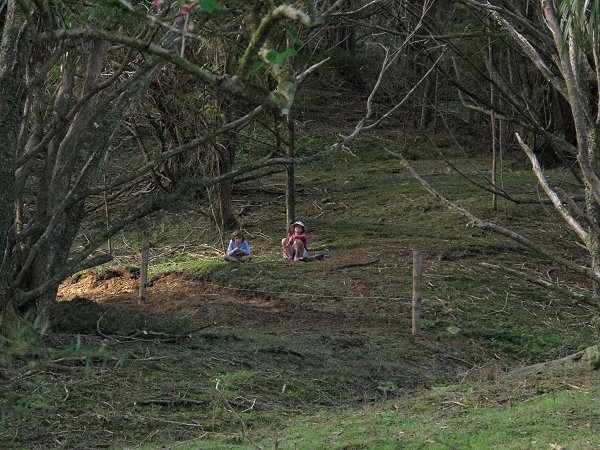 Hansel and Gretal, lost in the forest.

Amanda (left) and two friends, Karen and Natasha, came to visit - they'd been camping up north and popped in on their way back to Auckland.

Amanda and I officially contracted to be Auntie and Niece, years ago, when she was still quite small, long before I lived here.  Her mother, Rachel, is Stephan's younger sister. 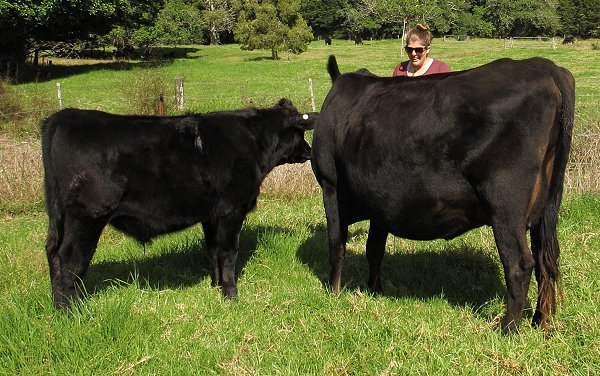 Neighbour Jane has gone south for a few days and asked us to pick her up on Saturday from the airport.  But then she realised her car had an expired Warrant of Fitness and I offered to take the car in for its inspection while she was away.  I made an appointment for this afternoon and the three of us (Stella, Jasper and I) went into town, dropped the car off and then walked up the main street.  We wanted to buy knitting needles for the children to take home and I thought I would have another look for a pair of smart black trousers at my regular clothing supplier, the Salvation Army Family Store.  Most people are continually gaining weight and I'm not, so it's proving a good place to get quite good clothes at a price which suits our Tractor Austerity Budget.

I have a need for a pair of smart black trousers because I'm being flown to Auckland on Thursday to meet some people on Friday, for a meeting akin to a job interview.  (More on that shortly.)

We went to the Sally Army shop and found the knitted toy pattern pile for the kids to look through and I went and found lots of black trousers to try on.  Having found a pair that fit but might need a bit of alteration, I took them off and saw the $10 price tag and thought, no, not when I was expecting to pay the usual $4 trouser price.  But thinking about the importance of the meeting on Friday, I looked at them again and noticed the label: "Career Essentials"; this must be meant to be!  I took them to the counter and said something to the woman about having chosen the most expensive trousers in the shop and she looked at the tag and said, oh, those are free today.  Stella said my surprised expression was very funny.

They were getting rid of clothing they'd had too long in the shop - although if they'd just reduced them to the usual price, they'd have sold.  With the original card label still attached, they'd obviously never even been worn.

You might think a variety of things about this story, presumably ranging from, what a sad-sack, to what a Scrooge; I get quite a kick out of frugality and always have, for some reason.  I've rarely been without enough money to survive, the only two difficult occasions I can remember being when I was 17 and living alone in Auckland and insisted on saving $100 each week from my meagre pay, so that I ended up eating porridge for several days when I ran out of food; and the other in the early days here, when for some reason we got so short that I had to juggle the payments of some of our ordinary bills for a couple of months.  The latter instance was the most disturbing, because there wasn't any spare cash anywhere; in the former, I could just have relaxed my savings plan.  But I know what happens when one does relax such restrictions, it being so easy to push spending just that little bit further all the time until the bigger savings plan fails.

Stephan and I are fortunate in having a similar-enough approach to money.  While he would tend to spend what he has without a long-term plan, if he doesn't have it, he's pretty careful.  Because I take care of all our finances and he doesn't really know how much there is at all, I can tuck savings away quite successfully, hence our ability to pay the full deposit on the tractor without too much trouble.

I've felt quite stressed about the tractor purchase for the first few months this year, but with cattle sales now occurring, there's a buffer for the next couple of payments and so I'm beginning to relax - my feeling, not my spending!

The two-year budget work I did does allow for ordinary farm spending to continue, and I need not to forget that it's ok to continue to spend that money as required.  It's just wine and cheese we're not to buy.  And really, $10 trousers would be extravagant! 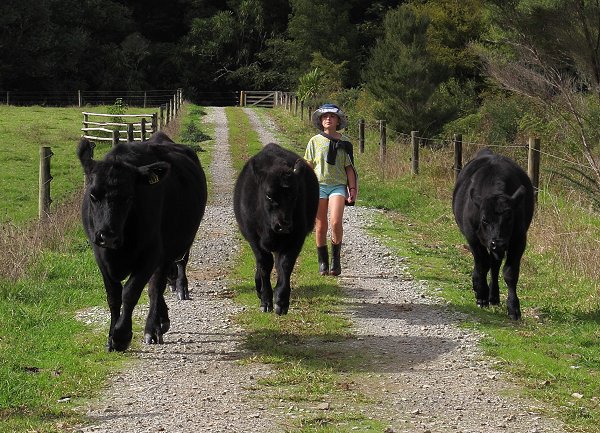 Stella walking the house-cow mob up the lane to new grazing in the Windmill Paddock. 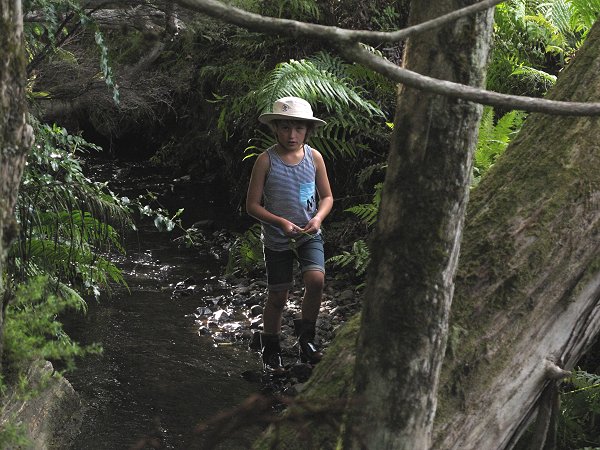 We went walking again and spent some time exploring streams and trees on our way home.

In the evening I weaned the last group of six calves and cows.  We'll wean Zella in a week or two, when it suits Stephan to be milking in the evenings as well for a while.

Wednesday the 1st of May 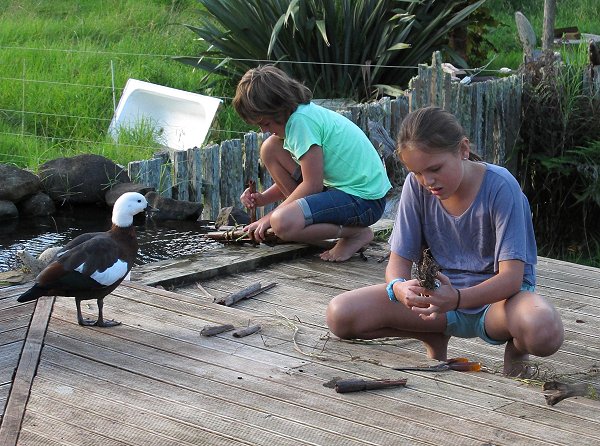 Jasper and Stella (and Storm) making raft boats to float on the ponds. 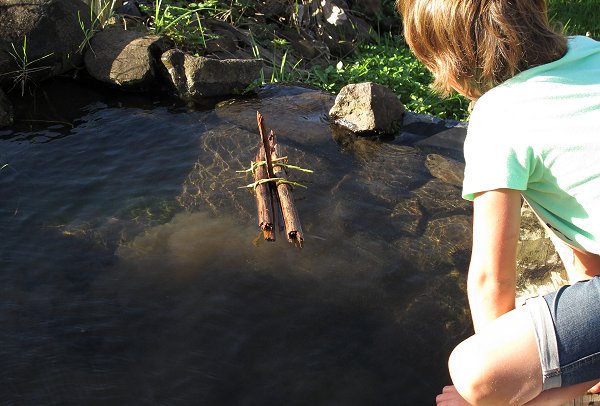 Jasper tried very hard to make his go over the waterfall.

The children were booked on the bus this morning and had to be at the bus stop at a quarter to eight, to leave at eight o'clock.  Fortunately we had the use of Jane's car, because without it our morning would have been rather tricky to arrange.  We put the children on the bus and waved them off, then went up to the airport in time for me to check in for my flight to Auckland.

I was recently nominated as the lay member on the Preliminary Assessment Committee (PAC) of the Veterinary Council of New Zealand (VCNZ).  The VCNZ is a legislative body whose job it is to "protect the public interest by regulating the veterinary profession".  The PAC assesses concerns raised about veterinarians by the public or other members of the profession.  If an official complaint is submitted, a Complaints Assessment Committee (CAC) deals with the matter.  A matter recently investigated by the CAC is currently being heard by a Judicial Committee and I was asked to attend and observe a day of such a hearing in Auckland, and meet with some of the VCNZ who needed to approve my appointment. 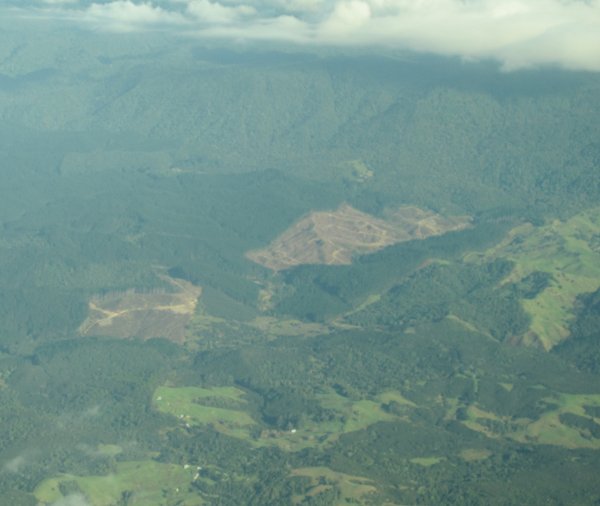 From the plane I could see the cleared pine plantation up the road from our place (the large bare area on the right) and its neighbouring clearance from which the logs were presumably taken out down Waiotehue Road, south of Takahue.  The Herekino Range is at the top of the picture.

Once in Auckland I spent a bit of time wandering around Queen Street, but realised how tedious that could be when you actually had no money to spend.  I enjoy it much more even when I don't spend anything, knowing I could if I wanted to.  So I went to the Library and did some reading until Rachel came and met me just after noon and we went and had lunch together.

Afterwards Nadene (my magazine editor and friend) came and met me at Jude's place for a catch-up.  I'd thought I might go down with Jude to meet the children off the bus, just for fun, but the timing didn't work with my social engagements.

In the evening I had dinner with the family and Jill came over for a while.  Jude dropped Jill home and me to the hotel down in the centre of town, where I spent the night. 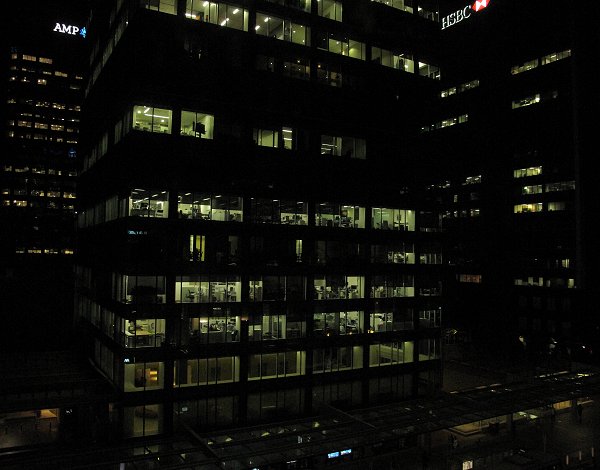 The view from my window.

The room had a bath, but when I went to run one, I discovered a greasy ring around the sides!  Don't go to the Mercure if you want a clean bathroom.  I could have phoned and moved room, but by that stage I couldn't be bothered with the fuss. 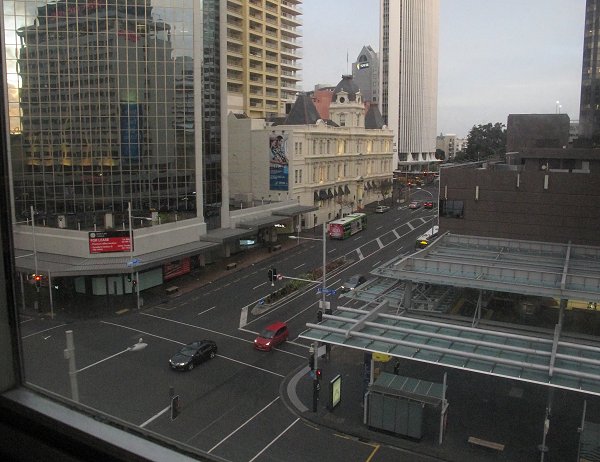 I attended breakfast with my primary contact at the Vet Council and afterwards went to the first floor where the Judicial Hearing was being held.  The essentials of the case are outlined in the NZ Herald report from early that morning.

While my role will not have any direct involvement at this level, it was interesting to see what happens at the most serious end of the process.

I had a very pleasant lunch with a member of the Vet Council, an opportunity for me to ask questions about VCNZ and my role, and presumably for him to assess my suitability.

The afternoon was slightly harder going, after such a lovely lunch and a disturbed night's sleep above the very noisy streets of Auckland.  (Surely a city which wants to encourage tourism and business visitors would try and eliminate the use of huge, noisy machines to clean things in the early hours?)

At around 4.30pm I excused myself, as it had been suggested would be appropriate, and went to the adjacent Downtown shopping mall, where there is still a wool shop.

While teaching the children to knit, I discovered I was able to hold knitting needles in the same way other people ordinarily do - until now I've knitted fast and evenly by holding the right needle in my right armpit and doing most of the movement with my left needle.  But if I can hold the right needle in my hand, I can use short needles and that means I can try knitting socks!  So I was on the hunt for some "on special" sock wool.  The woman in the shop sold me some wool (I nearly didn't, budget in mind) and gave me a free sock pattern.

I picked up my bags and went to Jude's place for the night, where I practised knitting wrist bands for the children, getting used to knitting in circles with four needles.  I love discovering a new ability.