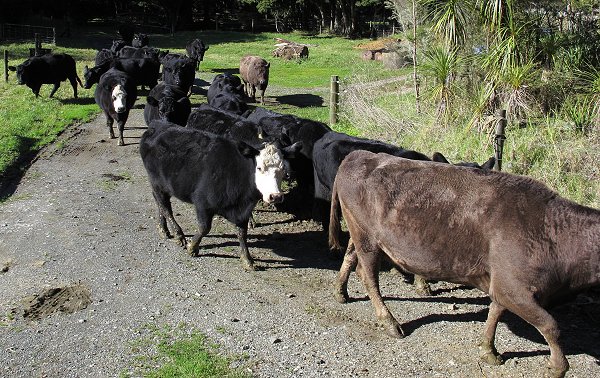 We had our first frost of the winter this morning.

I weighed the cows and applied pour-on drench to 14 of the 25, based primarily on their body condition.  Any cow in good or obviously increasingly good condition (I watch them quite closely in this period from weaning and into the winter) probably doesn't need help to battle her internal parasites. 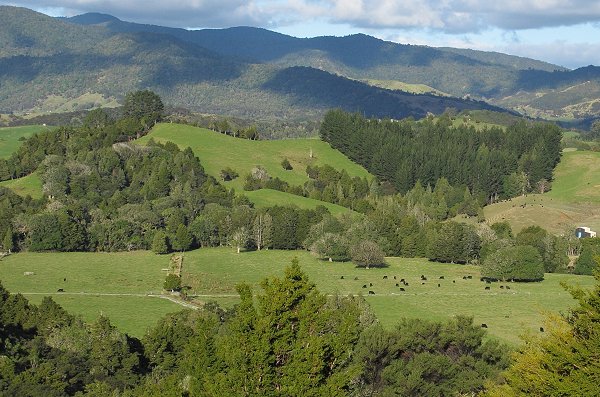 Checking on the heifers in the PW, I looked down on the flats and to the hills over the road.  The cows I drenched this morning are the large group on the flats (in Flat 3).

Across the road near the shed at the right in the picture, are the cattle belonging to the man who will not pay the bill for the testing of his steer which trespassed amongst my heifers last year.  I conversed with him in town recently and he maintains he has no need to pay me anything after his carelessness allowed that event to occur.  His attitude is not uncommon in this area.  I think he's a jerk and he obviously doesn't care about my now very poor opinion of him.  He told me he would stop putting small cattle on that block, but the cattle there now are small (and later in this week obviously got out through the same hole in the fence and onto the road-side, which he has taken no steps to prevent).  To avoid further problems I won't now put my cattle on our block over the road while his are grazing the neighbour's land.  It's a pain in the neck, but the risks are too high and the grazier obviously doesn't give a damn about his cattle or mine.

We will replace our road-side fence as soon as we can, but with the big swamp conservation job taking priority over the summer, it didn't get done this year.  My cattle don't get out onto the road, but I can't currently guarantee that other people's wandering stock can't get in. 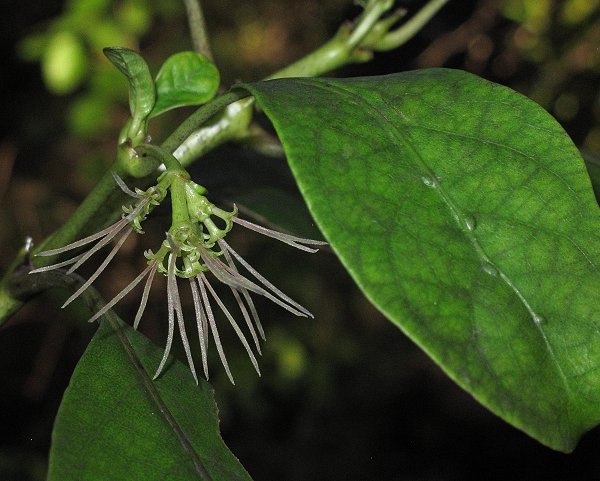 For several years I've thought these leaves were of a tree named Mangeao.  But when I checked the plant in my tree book, I discovered a description of Mangeao's flowers which did not match these at all.  If I'd looked more carefully, I would have noticed that the plant has all the features of a Coprosma and is actually Coprosma grandifolia or Kanono.  The trees have either female or male flowers; these are female.  There is a good description of them on this page.

I will find a male plant. 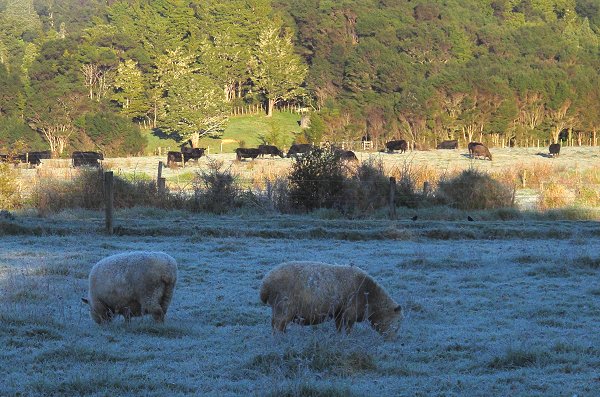 Brrrrrr.  Another frost, deeper this time.  Later on I brought the mob of 28 heifers down off the PW hill to the Windmill, so they can eat the nice lot of Kikuyu there before it all shrivels away as a result of the cold.

Monday the 1st of July 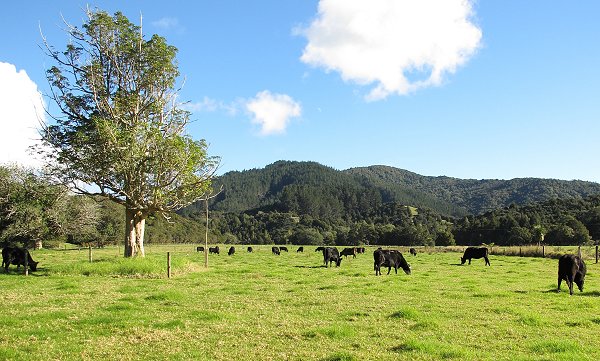 And another frost this morning, so I kept the cows moving across the flats for the same reason: may as well eat all the grass before it disappears.  I'm electric-tape breaking these paddocks in half. 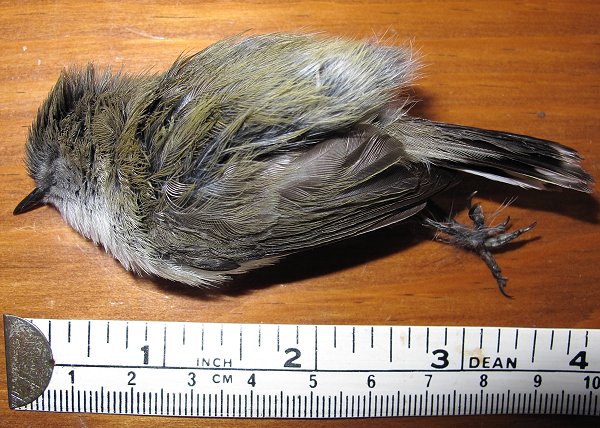 Finan is responsible for this death.  It's a Riroriro or Grey Warbler, Gerygone igata.

Finan repeated this transgression the following morning and I managed to get hold of him and use the dead Goldfinch he'd caught to batter him (lightly, since it was such a small bird) about the face.  I made the bird's small beak peck him on the face and told him exactly what I thought of his behaviour.  Whether this will have any effect on his bird catching habits I don't know, but his general demeanour was affected for several days. 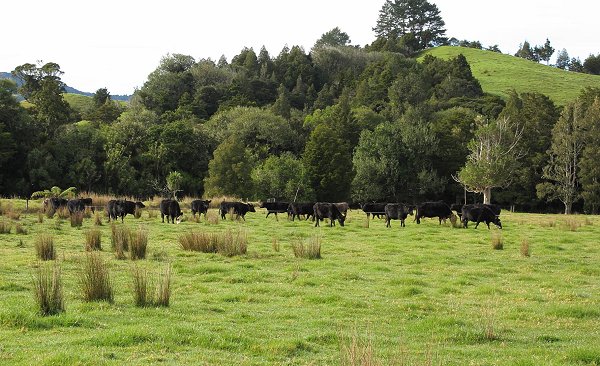 I gave the cows the other half of Flat 2 as soon as things had warmed up mid-morning.

In the afternoon I took the heifers to the yards and gave them all a copper shot, then brought the cows in as well and did them.

Demelza did her usual thing and just stood watching everyone else leave, so I walked off with them and left her there.  Bull 87 is on his own and I've been trying to decide who should be company for him; Demelza has now volunteered.

The Northland Regional Council ran a series of free Weed Workshops this week, around the Far North.  We attended this morning's session at the Kaitaia Primary School.  We're familiar with a number of the weeds displayed and discussed, but there are a lot more we don't see here, which are present in other parts of the region.  The most memorable piece of information I gleaned from the morning was that there are 2000 endemic plant species in this country and 20,000 introduced species of which 2000 have become invasive pest plants. 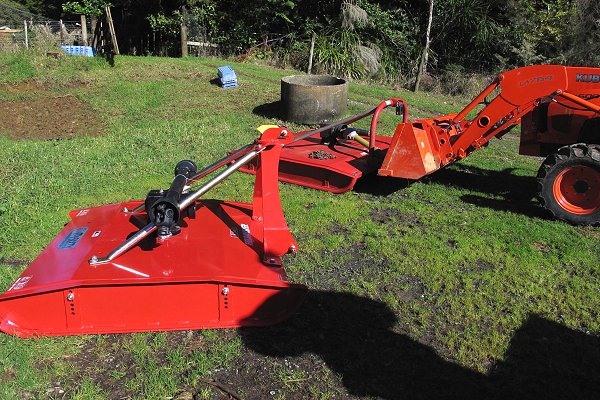 The correct new slasher was delivered today, and the other one taken away.  The new one is really new, arriving reassuringly wrapped in plastic with its brand new drive-shaft attached and labelled with the Fieldmaster name.  These things are all important bearing in mind that the other slasher has a half-wrecked drive-shaft of questionable origin and the whole machine looks far more used than we were told.  Somebody is trying to pull a fast one on someone and we're not sure whether the dealer is not very bright and has been cheated, or he thinks we're not and was trying to unload a problem on us.

While the whole business annoys me slightly, we're avoiding becoming involved by ensuring we buy what we meant to buy, according to the conversations Stephan had with the slasher manufacturers when he went to the Fieldays.

There's now some discussion around a name for this machine, since its purchase is Elizabeth and William's generous contribution to the orchard project - and for use around the farm as well.  There's a bit of background to be understood, in that a name for the tractor caused some entertainment during the summer, as various people thought to name it after William, or Stephan's elder brother, Richard ... and it's a reasonably large machine.  (Puerile humour, perhaps, but it was summer and we were relaxed and imbibing alcoholic beverages at the time - and if I've been too obscure, you'd better email me for further explanation.)

For the slasher we progressed along similar lines, beginning with The Willie-cutter, which naturally led us to: The Circumciser!  (Apologies to anyone who now needs to explain things to their children - I doubt it'll be the first time as a result of this website's content.) 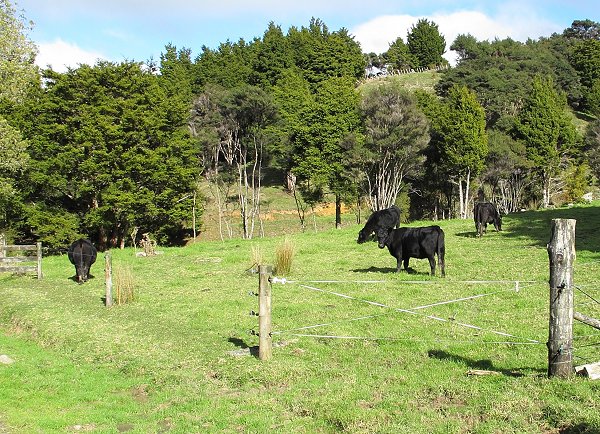 Yesterday I drafted these four thin cows out of the main cow mob, so I can feed them a little better than the others through the winter.  They are 571, Eva 81, Emma 93 and 657.

571 is now nearly six years old and really shouldn't need this sort of extra care and I'm not sure why she does.  Her daughters are good-looking animals, but none are yet adults, so I'm not sure whether keeping 571 to produce more daughters will prove to have been a good idea.
Eva 81 and Emma 93 are rising five and four years respectively and I'm not sure why they're not doing better.  657 is a R3 calved for the first time last year, so she requires good feed through this winter to ensure she continues to grow properly and approaches her second calving in good condition.

The other twenty cows went over the road to the smaller part of the block, at the opposite end from the troublesome cattle on the neighbour's property.

I put Demelza in with bull 87, after letting them graze as neighbours for a day.  He followed her around for a while, sniffing at her tail, but they settled down together quite peacefully.