The week beginning the 8th of June 2013.
Saturday the 8th 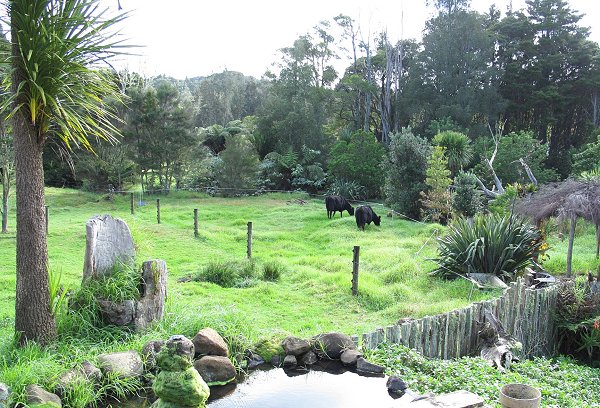 Because there are no trees yet planted where Stephan moved the garden fence a few months ago, he loosened off the wires, erected an electric tape and let Zella and Dexie in to graze the long Kikuyu for a couple of days.  They very much enjoyed it and cleaned it up nicely.  Cows can do as good a job as sheep, in grazing low to the ground. 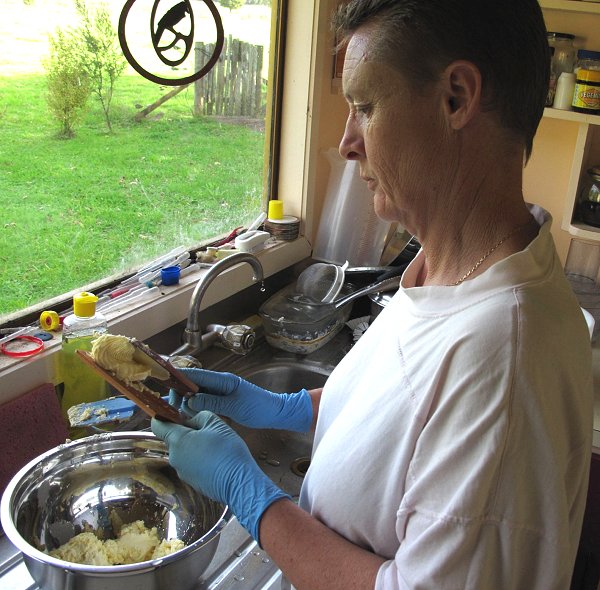 Butter-making.  In all the recipes and descriptions I've looked up, I've only found one reference to working the butter to get the water out of it after washing.  In the one instance I found, the reference was to working it with a pat (or paddle) and a wooden board.  I've taken to working it between two of the wooden pats, squeezing, pressing and smearing it between the two in small portions and it works well.  Using the grooved sides of the pats, the water runs out along the grooves made in the butter very effectively.

Sometimes I wear gloves because it's a wet job.  The pats are easy to rinse off afterwards and store in cold water in the fridge ready for next time.  I don't fancy cleaning a wooden board every time I make butter. 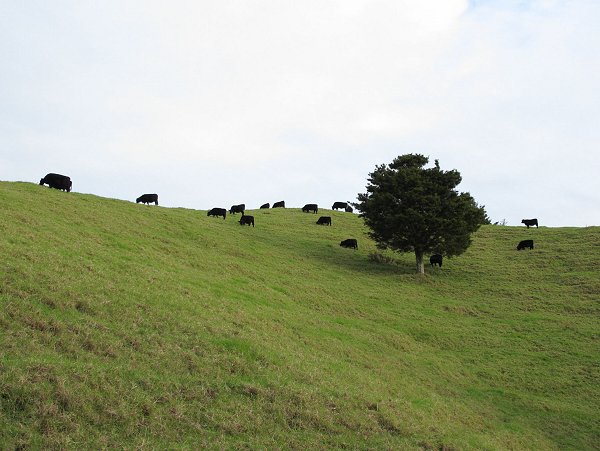 The heifers Over the Road.

The boundary fence (when in the wrong location) used to run down a line through the Totara tree.  At this time I can't see any difference in the pasture on either side of that line, but at other times, a difference is apparent. 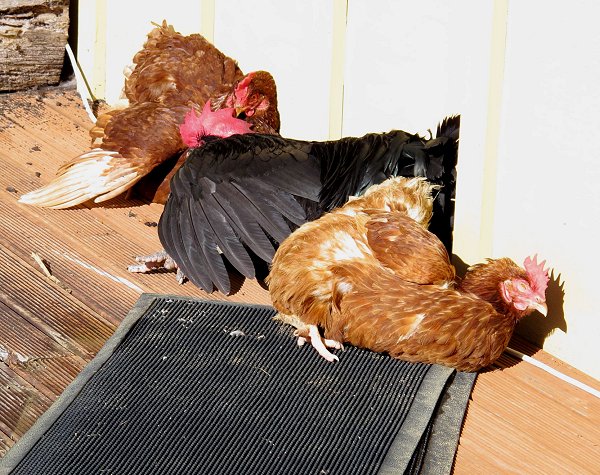 The chickens, now mostly free-ranging so they can be out of their shady cages, have taken to spending a lot of their time on our deck.  They may earn themselves another sentence in captivity, since they don't just sit ... 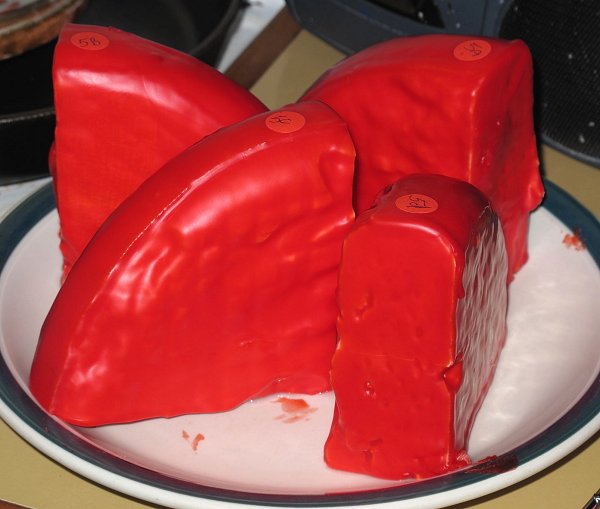 Stephan cut a round cheese into quarters, so he could fit them into the pot of wax.  They get dipped in a couple of times, then a sticker attached with a label and dipped again. 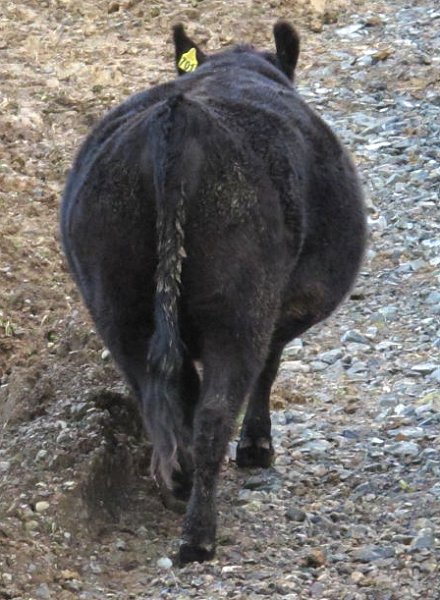 I'm a little anxious about this heifer, 701, because she's unusually wide.  She's five and a half months pregnant and in very good condition, so it could simply be that she's a bit fat; or there's more in there than is normal.  Hopefully the 'more' is only an extra calf, not something going wrong.  I might just need to take a few deep breaths and stop worrying. 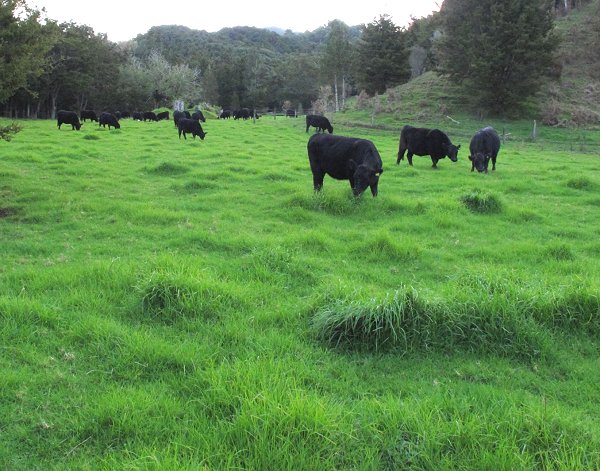 The heifers went into the Bush Flat paddock and set to work on all that nice grass.

I got the local courier company to intercept the delivery of my new computer monitor this morning.  Ordinarily courier parcels are given to the rural delivery contractor when they arrive in town, but I've had some trouble with ours, with damage being done to parcels and things going missing and I'm not convinced he would treat my expensive package with the care I desire.

We went to town and did some other business, then picked up the monitor package and came home.  My new computer view is taking a bit of getting used to, because I've previously only used square monitors and this one has 1920 x 1080 pixels.

Two lovely website-related things have happened in the last week.  Firstly I was asked by Renée, playwright and author, to answer some questions for a section of her website where she interviews writers she knows.  Having always admired Renée's work, it was a real thrill for me when she wrote to me a few years ago, after hearing that Radio New Zealand National interview Stephan and I did for Country Life.

Then contact from someone I haven't seen since I was a child, a woman Jill met on her first weekend in Aotearoa when she arrived on a ship from England.  Jill attended Kay and Hallam's wedding, perhaps with my Aunt Colleen and the three of them taught at Samuel Marsden Collegiate School for girls in Wellington before Jill married my father, Brian.  Kay was searching for pheasant information which led her to this site and she wrote that she knew I must be Jill's daughter because I write with the same turn of phrase.  It was lovely to catch up! 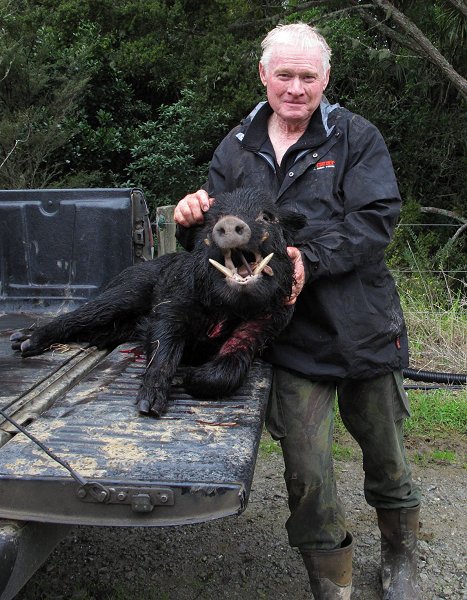 Xavier and Russell came out today for a pig hunt and here is their catch.  I'm glad to have that one off the pastures, because pigs like this make such a dreadful mess.  I wish the hunters would come back more regularly and take more of them.

Stephan left home this morning at four o-clock and drove down to Kawakawa, where he caught a 5.30 bus going to the National Fieldays near Hamilton.  The Northland Rural Support Trust had, as part of its drought response (this was the government funding often referred to during the drought as being made available to struggling farmers, but was actually to the support trusts in the affected regions), sponsored the bus to the Fieldays, so that Northland farmers could pay only $10 for the return trip and get away from the farm for the day.  When I first saw it advertised, I cast it aside, thinking it would be impractical for us to take advantage of the offer, but when I told Stephan about it later, he seemed quite keen.

There are a few things we want to investigate, including a slasher for the tractor and a new head-bail gate or whole crush pen for the planned new yards.  I spent Wednesday on the Fieldays website, looking up all the sites Stephan would need to find and making him a list in a useful order of discovery.  The Fieldays site at Mystery Creek is huge and if you don't have a plan, you only ever see a tiny portion of what you're really looking for.  There's so much of interest, that if you're just window-shopping, it would take longer than the four days of the event to get around everything.

Three in the morning would have been too early for Stephan to milk Zella, so I became the cow milker for the day.  It's a lovely job in many respects, a warm side of cow at your left ear, as you pull and squeeze to extract the milk.  But it isn't something my hands could stand doing every day.  I got about two thirds of the milk Stephan normally would before I got too tired.  In the evening I managed about the same amount.  It won't hurt Zella much not to have been milked out completely; she just might be a bit tighter tomorrow morning.  She's such a cooperative cow.  I wondered if I'd have to put the chain around her rear to stop her leaving before I was ready, but she patiently waited while I spent about three times as long as Stephan would.  What a darling. 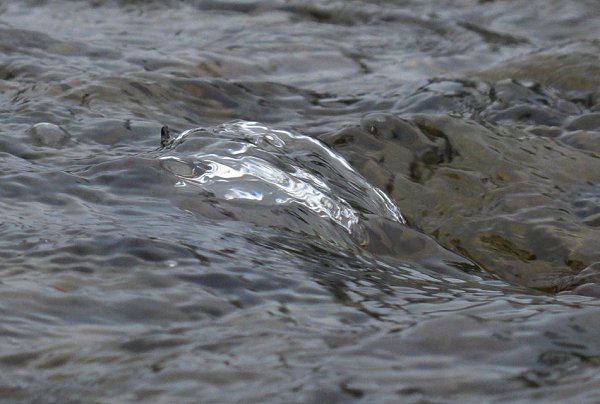 As I approached the stream crossing near the Bush Flat paddock, this bright sparkle caught my eye.  A tiny stick stuck between some stones was disturbing the water flow and creating lovely water and light effects.  I tried taking a number of pictures with different focal lengths and exposure settings and liked this one best.

Stephan arrived home at 11.30pm.  He'd sent a text when leaving Kawakawa, so I knew exactly when he'd arrive and went out to open the gate - I had to wait only a couple of minutes in the dark before hearing the ute coming up the valley road.  He'd had a great day!