Finally some of my insemination cattle came on heat!  I was beginning to despair, wondering if I'd been missing all the signs?  I'm pretty sure I've missed a couple of them, but perhaps next time round will be better anyway.  As an example, I looked up Demelza's mating records and saw that she has never held to an insemination on the first heat of a season, so when she looked like she was on heat on the second of January but stopped being of interest to the others very quickly, I decided to leave her for three weeks.  As the other suspects are her daughter and grand-daughter, missing their first heats may be to my advantage.

Yesterday afternoon I did Imagen (who's grazing with Zella and took a bit of detection, because two cows on their own won't necessary show a lot of characteristic heat behaviours) and this morning heifer 729 started yelling in that special way and a little later, Queenly 107 came on too. 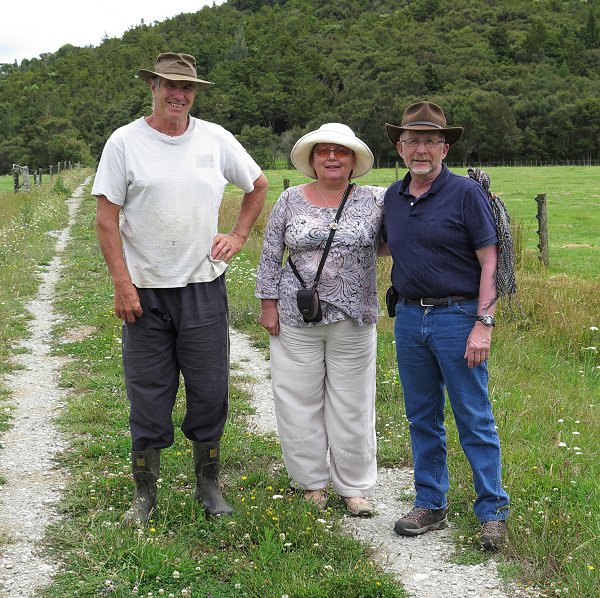 A few weeks ago I saw an internet discussion board post from someone in Canada about a visit to Aotearoa, looking for ideas on where to travel.  I responded and subsequently invited Brian and Krystyna to come and stay, on their way around Northland.

They arrived for a late lunch, came out walking and we had a pleasant dinner together, made somewhat late by my need to inseminate a couple of cows during the evening.

They set off again early on Sunday, for the Cape and on around the country.

The heifers are easier to do this year than they were last, perhaps because they're better-grown?  They're also quieter than last year's lot, which is nice. 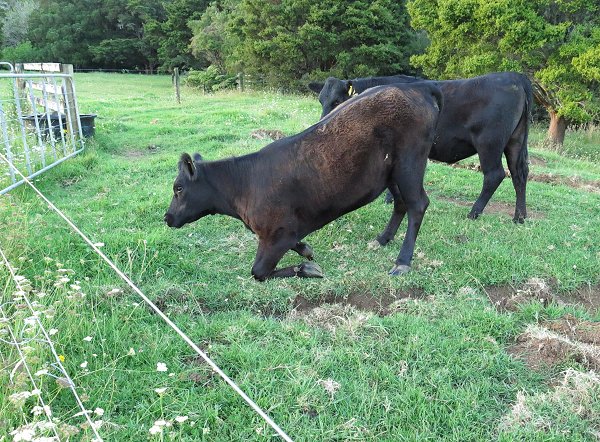 Victoria did not appear to respond to the anti-inflammatory injection in the first couple of days, but I think she's a bit better today.  Do such drugs potentially work on inflammation in neurological conditions, but take a little longer to do so?  That's my impression, but I don't know enough about such things to be sure.

But this does tend to confirm that her pain does not have a physical origin, because if it did it should have been relieved by the medication within a few hours of administration.

The vet said he had no welfare concern for her if we continued to watch her and see what happens.  My biggest concern is that she won't eat enough, because she's not comfortable on her feet for long, grazing. 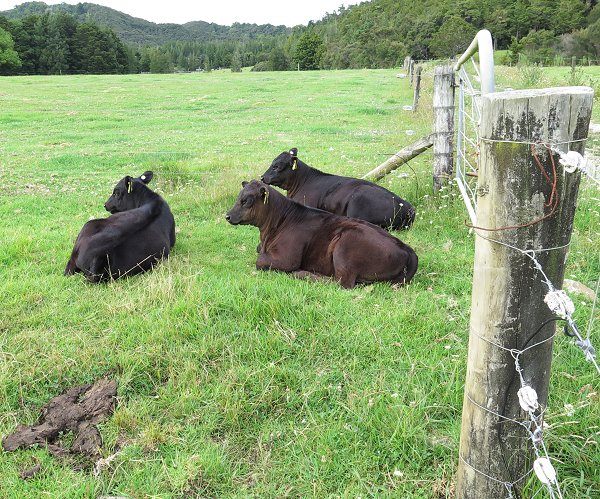 Training calves to be calm involves being calm around them.  These three remained sitting where they were as I opened and stepped through the gate.  I ensure my movements are smooth and I find that if you don't look at an animal, it won't feel as threatened by your physical proximity.

The calves and heifers in the insemination mob do get particularly quiet, because I walk amongst them every three hours or so, every day. 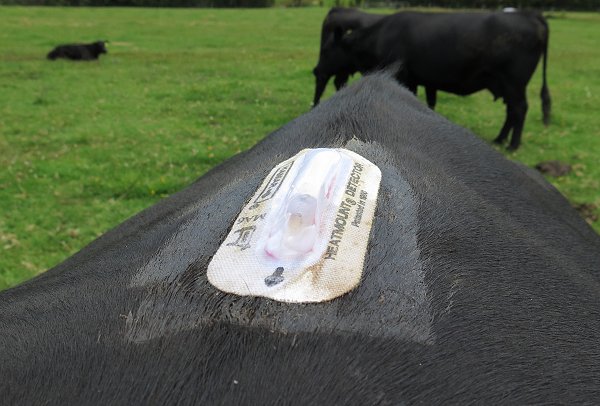 Yesterday evening I put heat indicators on seven of the insemination mob - those I expect to come on heat within the next couple of weeks.  This morning I discovered Demelza's daughter, 132, chewing her mother's indicator and this is all that's left: the dye tube from inside has gone!

Now I remember thinking last year that it would be as useful to stick white patches of material to the backs of the cows, instead of the expensive indicators because when this sort of thing happens the only indication I'm going to get that Demelza is on heat, is dirt on the white fabric from the chest of anyone who mounts her. 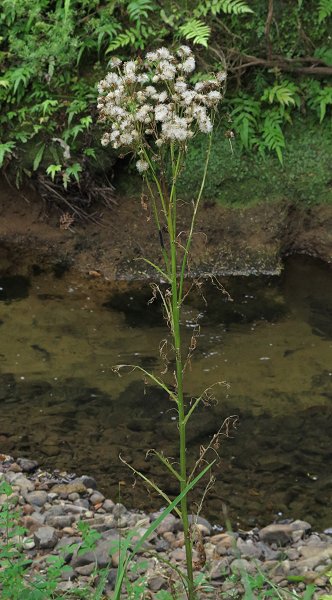 I wonder if this Ragwort plant was prompted to set seed by the removal of all its leaves?  Caterpillars strip some plants completely, but if they've already flowered, this can happen, so it doesn't really help keep the species under control.

Since putting the insemination mob heifers up the race yesterday to put their heat detectors on, some of them are letting me get close enough to scratch their tails out in the paddock.  They're noticeably calmer as I approach them.  I took some time over each one in the race, getting her to stand while I scratched along her back and around her tail, demonstrating the pleasure of allowing human touch.  There's still some work to do on the rest of the yearlings, which haven't yet had the opportunity to experience this pleasure, but I must make the time to do the same with them at some stage, since it appears to have been a successful approach with the others. 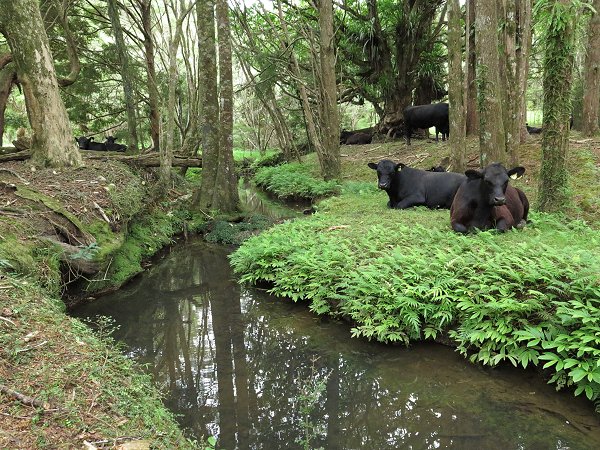 This is a beautiful spot in the Frog paddock.  When we eventually fence off all the stream banks, the cattle won't be able to access this area but in the mean time it's a place they often enjoy lying.  When we do the reserve fencing, we'll ensure they still retain a lot of shady areas around the edges of this place.  While this level of stock concentration doesn't cause a huge amount of environmental degradation, they do cause intensive damage where they choose to cross streams, simply because they're heavy and sharp-footed and tend to follow each other's tracks. 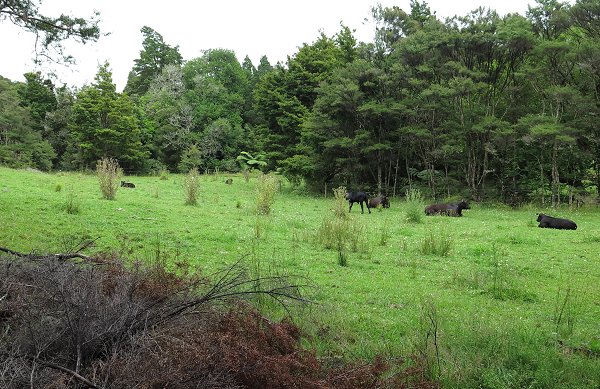 We tend not to expend a lot of energy on thistle control, since the Scotch Thistle is the only one which really grows much around here and it would appear that the fertility of the soils determines where it grows.  On the fertile paddocks there might be one or two plants, but never as many as have grown in this part of the Bush Flat paddock, which has not nearly as good fertility as some of the flats.

I asked Ryan to spread the last lot of RPR fertilizer in here quite heavily and I'll get him to repeat that next time and we'll see how the area improves over time.  Little pockets like this can be quite productive, being sheltered and North-facing.

Cows in Mushroom 1.  There's lots of lovely grass growing along with the flowering Parsley Dropwort.  The flowers are still young enough to be eaten by the cattle, so they'll clean a lot of it up. 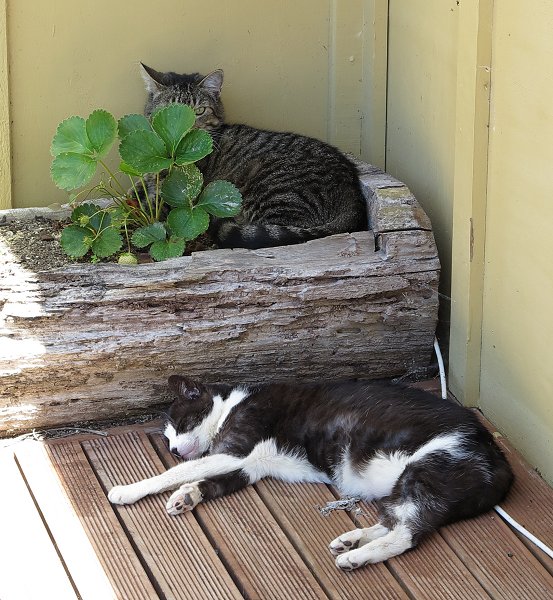 Who do you think you are, sitting in the strawberry garden?

I keep finding Finan sitting in places he shouldn't be.  He also likes a seed tray in my green house, where he's been sitting on a Cyclamen seedling without any regard for its welfare.  I haven't worked out how he gets in there. 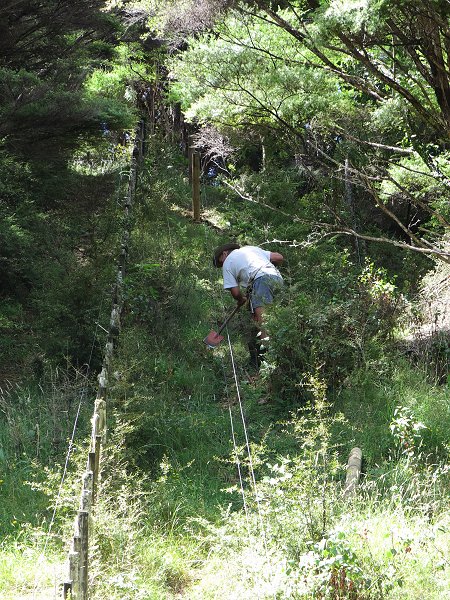 Stephan spent a few hours clearing trees and digging in posts for the two-wire electric fence along the inside of our back boundary.  There aren't cattle on the other side very often, but my life is easier if I don't have to make adjustments for when they are.

The purpose of this sort of internal fencing is to stop our cattle having direct contact with any others.  Bovine Viral Diarrhoea (BVD) is common in northland and I run the risk all the time that my herd will contract it and we'll lose a couple of years' breeding progress while we get over it.  The answer is either to vaccinate everyone annually, or to ensure there's no contact with other cattle.  The no-contact option is easier in our case, so that's what we've been working towards. 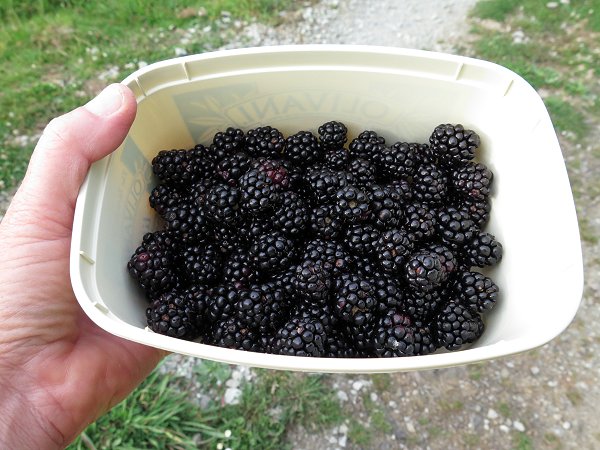 It's Blackberry time!  I picked enough for us both to have dessert this evening, with fresh cream.  Lovely. 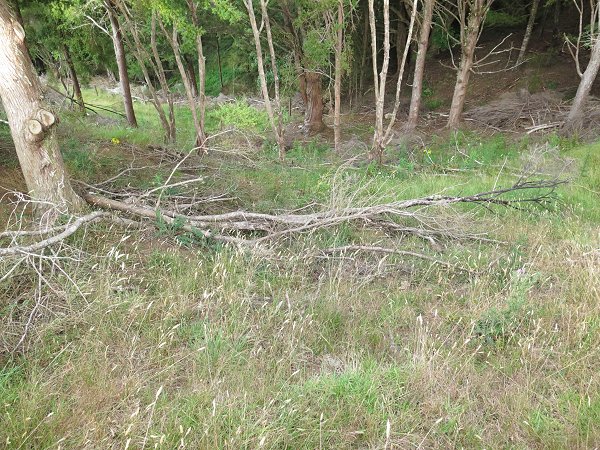 Looking down a very steep bit of the paddock Over the Road, where I spent a couple of hours last year very carefully bagging a lot of Ragwort seeds and flowers.  Today I climbed down and found only about a dozen plants.  We could win this battle. 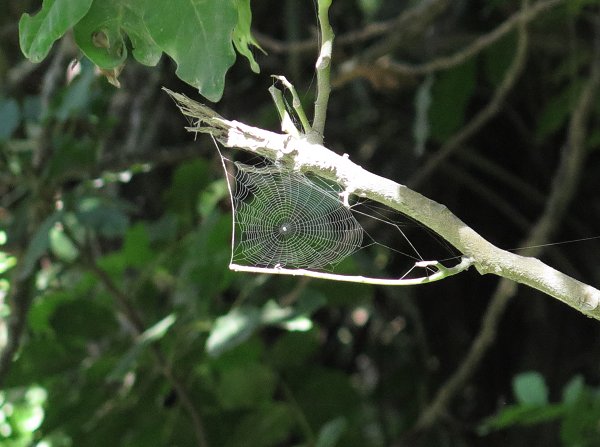 With huge logging trucks going up and down the valley now, every week day's air is filled with dust.  The only good thing I can find to say about that is that it makes a lot of very pretty spider webs visible in the trees along the sides of the road.

On days when there's little wind, a dusty haze drifts across the flats after a truck has travelled up or down the road.  A slight northerly breeze will give us a clear day, but from any other direction, the dust gets us.  I can't smell or taste it, but those micro-particles don't do anyone any good and I've taken to washing clothes only in the weekends, when the trucks aren't running.

Stephan is working on the roadside, so gets the direct effect on a regular basis! 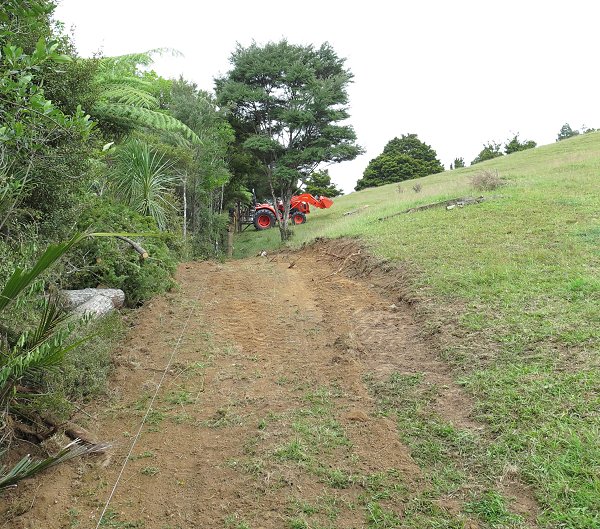 This is a job I've wanted to see done for some time: the new road-side fence Over the Road.  The fence was adequately keeping our animals in, but could not stop a determined trespasser from the roadside.

Stephan managed to thump all the posts in this section, which runs from the gateway at the corner to the beginning of the reserve area up and over the rise beyond the tractor.  A couple of medium-sized Totara which had grown up through the fence had to be felled, but Stephan decided he'd work around that lovely Kanuka.  Why fell a tree when it can be avoided? 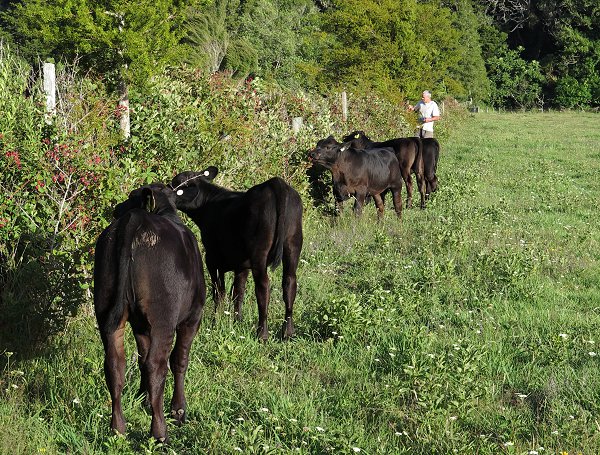 Picking blackberries along the Flat 1 fenceline.

Stephan took his container-load home and put them in the freezer, to wait until the apples are ripe and he can make jelly.  The calves carefully picked single berries and leaves from the plants and enjoyed them immediately.