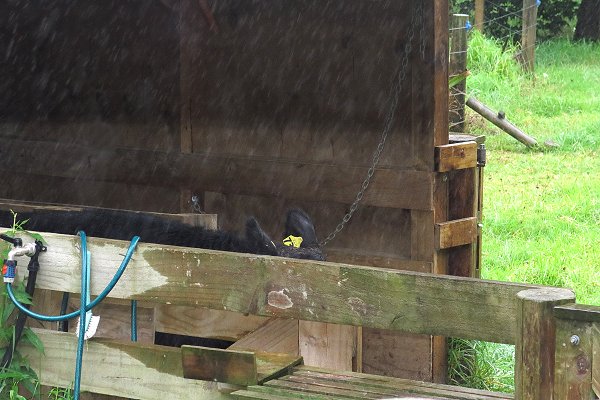 The cyclone has been a very gentle event thus far, with a softly-falling, constant precipitation which is exactly what the parched ground needs.  I had cat cages ready on the deck to go and rescue two cages of hens if the rain had become torrential, but didn't need them.

I left the milking shed open for the two calves and this morning they were both in there, keeping dry.  The two cows have been going across the bridge to the Pig Paddock at night, but last night I closed the gate so they couldn't cross the river, in case it flooded by this morning. 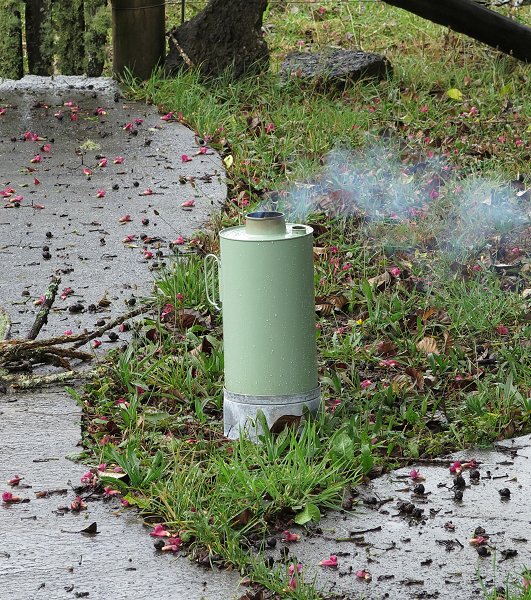 But somewhere there'd been a lot of wind, so we had no power when we got up this morning and no prospect of it coming on again before the afternoon, so I dragged the Thermette out of its hiding place and set a little fire in it outside the back door.  We had a couple of cups of coffee and filled a Thermos for later.  It's a very useful little device!

There have been a few very strong gusts of wind and it is otherwise quite blustery, but nowhere near as bad as the forecasters had warned.  This little Cabbage Tree (or small bit of a much larger one) was a casualty - although it might have survived had Imagen not decided to eat it for breakfast!

We had another Outpatients appointment today.  Stephan's toe was x-rayed, although the only comment we received about that was from the radiologist (the surgeon didn't even refer to it) who said the bone fragments didn't appear to be knitting together.  We asked the surgeon about that and he said we should expect it to take some time.  He wants to see Stephan again in another four weeks.  This is all taking far longer than I would ever have imagined! 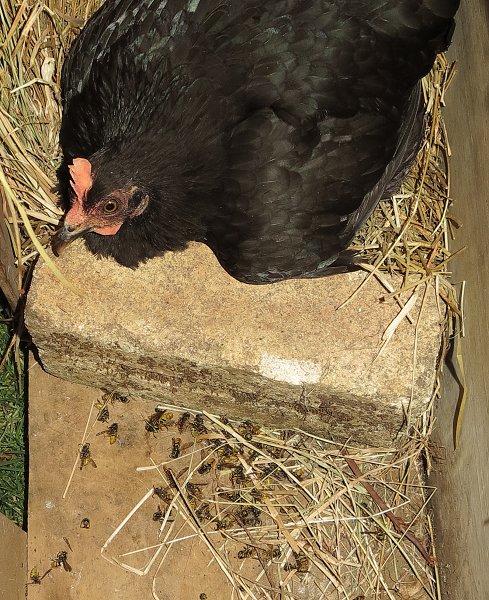 I have no idea what's been going on here, but lots of wasps were gathering around the sitting hen's cage during the warm afternoon and inside, this pile of dead ones.  I presume the hen killed them as they came in.  At one stage she appeared to be sitting outside, so they possibly disturbed her enough to leave her nest.  I put a mosquito net over the whole cage for the rest of the day, to stop them getting to her. 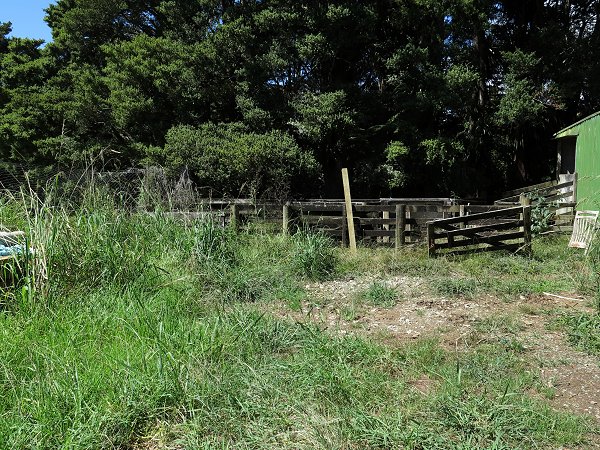 Yesterday I thought about the sheep and the rain and the high risk of flystrike when the weather continues to be warm after rain and got Stephan to phone Kees and ask if he'd be willing to come and shear our nine sheep.  He'd have done it yesterday afternoon, but even though the weather was fine by then, the sheep were still quite wet.

Lynn offered to come round this afternoon and help me tidy up the sheep yards, which were terribly overgrown, with a couple of gates hanging off their hinges.

Then we got the sheep in but put them in the cowshed where there was shade, since the sheep yards were in the full heat of the afternoon sunshine.  They're more comfortable during shearing if they've been off the grass for a few hours beforehand. 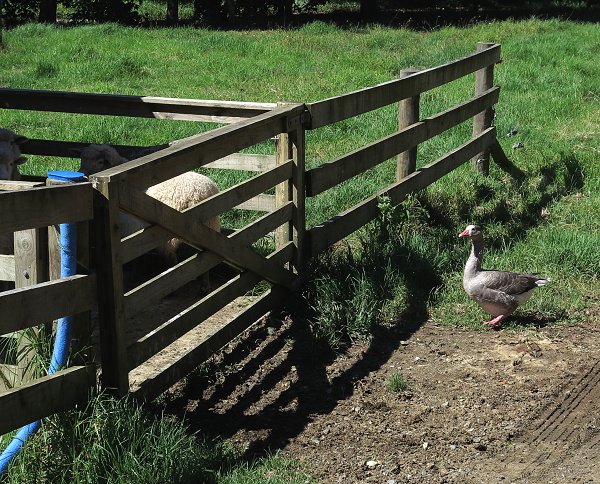 This sheep (it's all about self-identification, isn't it?) didn't go in with the others. 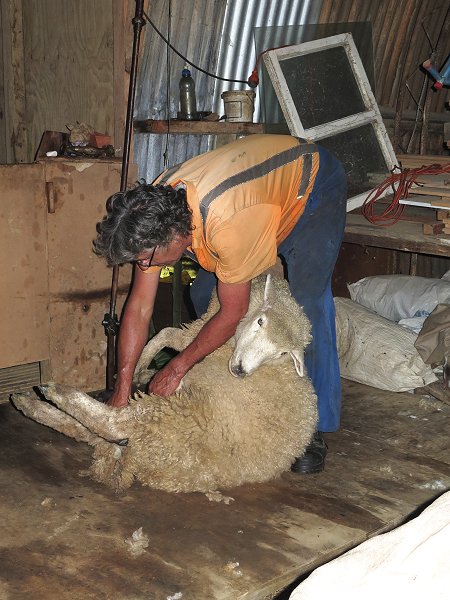 Kees arrived after he'd finished his day job and got on with shearing.

I neglected to take any pictures of Stephan, sitting out to the right of the photo on a deck chair with his foot up on a wool fadge.  He's really not one to sit around and watch other people work and is finding it all dreadfully frustrating. 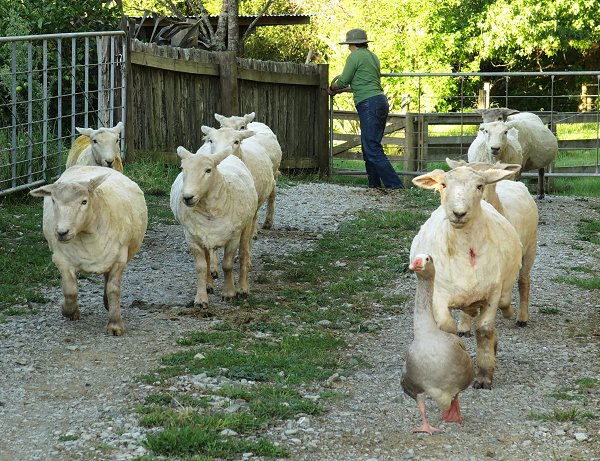 When the sheep were all finished, Lynn and I took them back to the House Paddock so I can keep an eye on them for the next couple of days.

There were a couple with a few live maggots - the one at the back on the left has iodine sprayed on her back because she has some sort of fungal growth in her wool (and was one of those with maggots).  She's the ewe William helped me drench a couple of weeks ago.  She's not in very good overall health, but hopefully being shorn of that smelly fleece will help her pick up a bit now.

Then we had dinner, brought by Lynn and Kees! 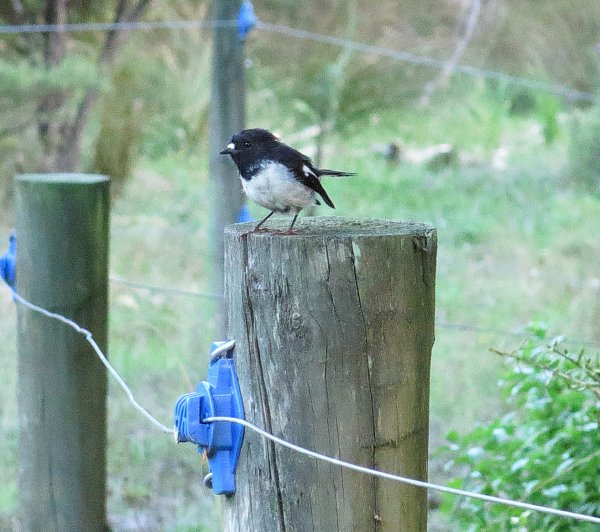 Often as I ride along the tracks, I'll notice a Tomtit sitting on a fence by the track.  They appear more often now than they used to, presumably because there are more of them, rather than that they've become more approachable.

I don't often see the females because they're generally more secretive and tend to stick to the trees - and being green and grey in colour, are not so easy to see amongst the foliage.

Zella and Imagen have been really slow to come in over the last couple of weeks, so I started putting a bit of Molasses in bins for them by the cowshed each evening.  Now Zella runs the last bit!

I have been surprised to see Zella is now dominant over Imagen (her mother, previous top cow on the farm) when it comes to who gets the Molasses.  I wonder if Zella would now carry similar social weight with the rest of the cows?  Last season they tried to beat her up when accidentally put together, but if she's now fiercer than her mother who only needs to look at the others to get them to do what she wants, perhaps she'd be ok joining the herd from time to time. 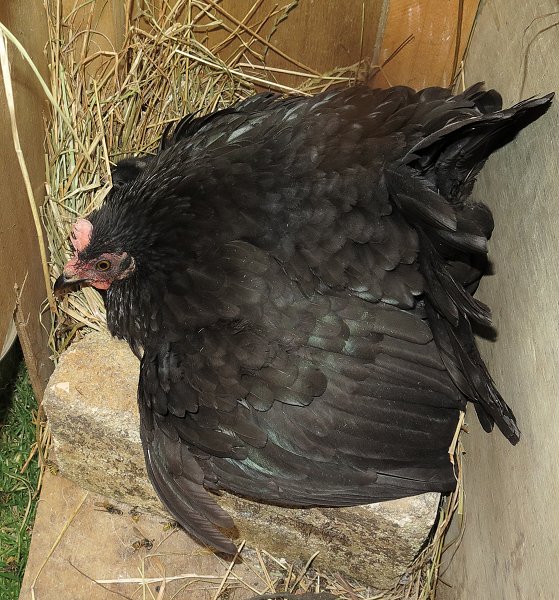 The little hen is clucking away to her eggs and one hatched chick - just beyond her head in the picture.  Her posture has changed, now sitting with her wing outstretched, as if to protect whatever she has beneath her more effectively.

Two weeks ago I shone the torch through the eggs and determined that they were all fertile and developing, and last night there were cheeps coming from the one egg I picked up and put to my ear.  It's fun having chicks hatching. 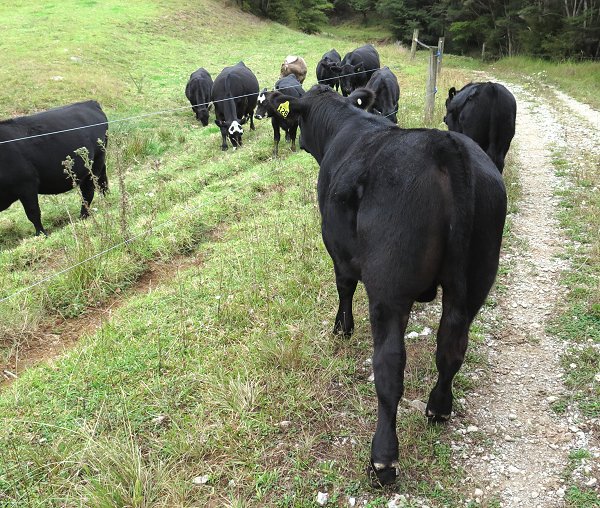 Yesterday evening I moved these cows on the left from the hillside PW to the Swamp Paddock, but the two bull calves didn't come down.  I could see them away up the hill, so left the PW gate open, thinking they'd get hungry and come down and sneak under the spring gate to join their mothers.  Today one was in the paddock and bull 128 was out in the lane with another calf.  His mother's udder seemed pretty tight, so I wasn't sure he'd been in for a feed since I last saw him. 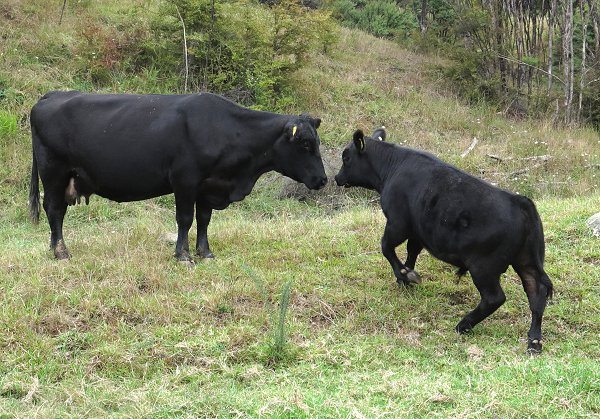 I put the two calves back in the paddock and 128 was very relaxed about rejoining his mother.  I've been wondering lately if he's already partly weaned, not needing so much from her any longer?

I sent some of his tail hairs away for genetic testing and it turns out that he is, unfortunately, a carrier of Arthrogryposis Multiplex like his mother, Ida 75.  I'm now tossing up whether or not to have him castrated, or to keep him for very light use over a few of the cows, in the hope of getting a couple of daughters without the faulty gene.  I think he's a nice little bull and that would be a quicker way to breed from this line than to keep waiting for his mother to produce a clear daughter.  Still pondering ... 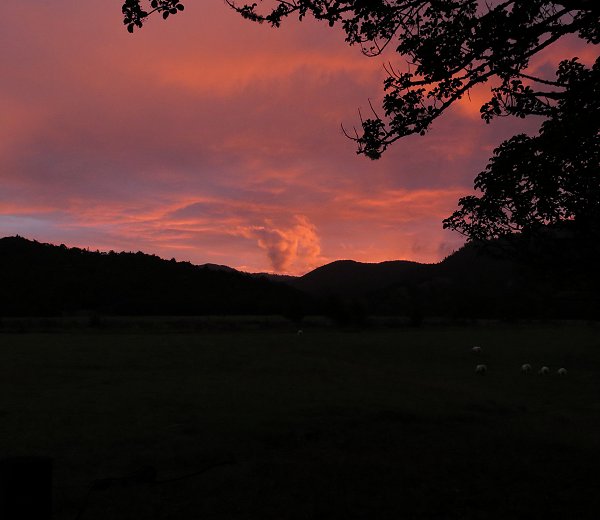 With high hills to the west, we don't often get really spectacular sunsets, but this one was pretty good. 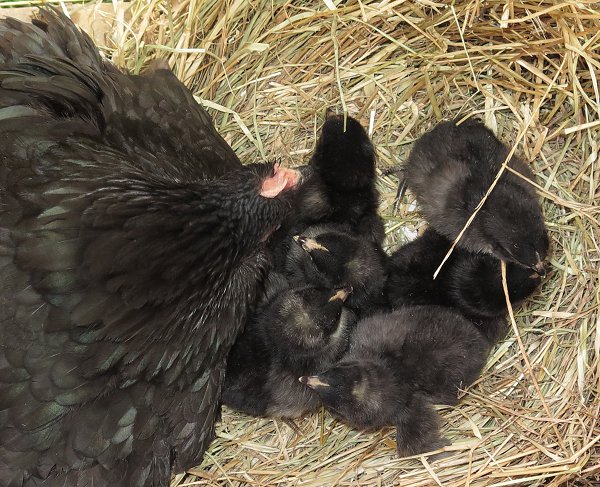 Off to town again today, to return the hospital-issued crutches and pick up some others sent up by ACC.  The District Health Board only fund theirs for six weeks and then ACC has to provide them.  It all seems completely ridiculous to me: why on earth can't ACC just pay some money to the DHB, if necessary, and prevent all this stupid waste of resources in transporting things back and forth?

ACC's crutches have stupidly small hand-grips for anyone with large hands, but my comment to the case manager was simply that that's what they have, so that's it.  ACC has had problems for a long time; seems like it still does.  I've fought it in the past (once knew the Act and one of the proposed Bills inside-out while working on submissions on changes to the legislation), so maybe I'll work a bit harder to suggest useful changes again.